The opening and closing of plant stomata regulates the global water, carbon and energy cycles. Biophysical feedbacks on climate are highly dependent on transpiration, which is mediated by vegetation phenology and plant responses to stress conditions. Here, we explore the potential of satellite observations of solar-induced chlorophyll fluorescence (SIF)—normalized by photosynthetically-active radiation (PAR)—to diagnose the ratio of transpiration to potential evaporation (‘transpiration efficiency’, τ). This potential is validated at 25 eddy-covariance sites from seven biomes worldwide. The skill of the state-of-the-art land surface models (LSMs) from the eartH2Observe project to estimate τ is also contrasted against eddy-covariance data. Despite its relatively coarse (0.5°) resolution, SIF/PAR estimates, based on data from the Global Ozone Monitoring Experiment 2 (GOME-2) and the Clouds and Earth’s Radiant Energy System (CERES), correlate to the in situ τ significantly (average inter-site correlation of 0.59), with higher correlations during growing seasons (0.64) compared to decaying periods (0.53). In addition, the skill to diagnose the variability of in situ τ demonstrated by all LSMs is on average lower, indicating the potential of SIF data to constrain the formulations of transpiration in global models via, e.g., data assimilation. Overall, SIF/PAR estimates successfully capture the effect of phenological changes and environmental stress on natural ecosystem transpiration, adequately reflecting the timing of this variability without complex parameterizations. View Full-Text
Keywords: solar-induced chlorophyll fluorescence; transpiration; transpiration efficiency; GOME-2; eddy-covariance solar-induced chlorophyll fluorescence; transpiration; transpiration efficiency; GOME-2; eddy-covariance
►▼ Show Figures 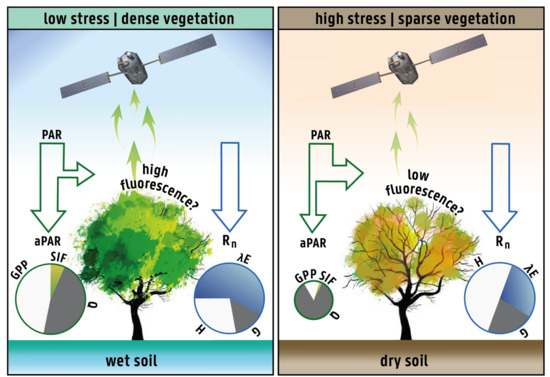