Use of Remote Sensing, Geophysical Techniques and Archaeological Excavations to Define the Roman Amphitheater of Torreparedones (Córdoba, Spain)

Non-destructive techniques are widely used to explore and detect burial remains in archaeological sites. In this study, we present two sets of sensors, aerial and geophysics, that we have combined to analyze a 2 ha sector of ground in the Torreparedones Archaeological Park located in Cordoba, Spain. Aerial platforms were used in a first step to identify a Roman amphitheater located near the Roman city. To ensure greater reliability and to rule out geological causes, a geophysical survey was subsequently carried out. Magnetic gradiometer, electrical resistivity tomography (ERT), and ground-penetrating radar (GPR) methods were also used to confirm the existence of this structure, define the geometry and, to the greatest possible extent, determine the degree of preservation of this construction. The adverse conditions for data acquisition was one of the main constraints, since the area of interest was an almond plantation which conditioned geophysical profiles. In addition, due to the low dielectric and magnetic contrast between the structures and the embedding material, meticulous data processing was required. In order to obtain further evidence of this amphitheater and to corroborate the aerial images and the geophysical models, an archaeological excavation was carried out. The results confirmed the cross-validation with the predicted non-destructive models. Therefore, this work can serve as an example to be used prior to conservation actions to investigate the suburbs and landscapes near similar roman cities in Spain. View Full-Text
Keywords: roman amphitheater; remote sensing methods; aerial imagery; geophysical survey; archaeological excavations; Torreparedones roman amphitheater; remote sensing methods; aerial imagery; geophysical survey; archaeological excavations; Torreparedones
►▼ Show Figures 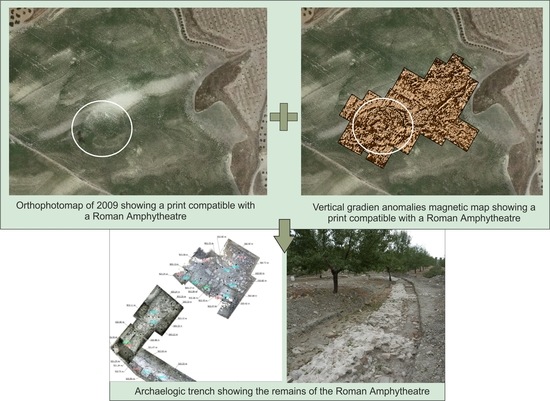