Namibia is a very arid country, which has experienced significant bush encroachment and associated decreased livestock productivity. Therefore, it is essential to monitor bush encroachment and widespread debushing activities, including selective bush thinning and complete bush clearing. The aim of study was to develop a system to map and monitor fractional woody cover (FWC) at national scales (50 m and 75 m resolution) using Synthetic Aperture Radar (SAR) satellite data (Advanced Land Observing Satellite (ALOS) Phased Arrayed L-band Synthetic Aperture Radar (PALSAR) global mosaics, 2009, 2010, 2015, 2016) and ancillary variables (mean annual precipitation—MAP, elevation), with machine learning models that were trained with diverse airborne Light Detection and Ranging (LiDAR) data sets (244,032 ha, 2008–2014). When only the SAR variables were used, an average R2 of 0.65 (RSME = 0.16) was attained. Adding either elevation or MAP, or both ancillary variables, increased the mean R2 to 0.75 (RSME = 0.13), and 0.79 (RSME = 0.12). The inclusion of MAP addressed the overestimation of FWC in very arid areas, but resulted in anomalies in the form of sharp gradients in FWC along a MAP contour which were most likely caused by to the geographic distribution of the LiDAR training data. Additional targeted LiDAR acquisitions could address this issue. This was the first attempt to produce SAR-derived FWC maps for Namibia and the maps contain substantially more detailed spatial information on woody vegetation structure than existing national maps. During the seven-year study period the Shrubland–Woodland Mosaic was the only vegetation structural class that exhibited a regional net gain in FWC of more than 0.2 across 9% (11,906 km2) of its area that may potentially be attributed to bush encroachment. FWC change maps provided regional insights and detailed local patterns related to debushing and regrowth that can inform national rangeland policies and debushing programs. View Full-Text
Keywords: Namibia; bush encroachment; ALOS PALSAR; woody cover; LiDAR; tree; shrub Namibia; bush encroachment; ALOS PALSAR; woody cover; LiDAR; tree; shrub
►▼ Show Figures 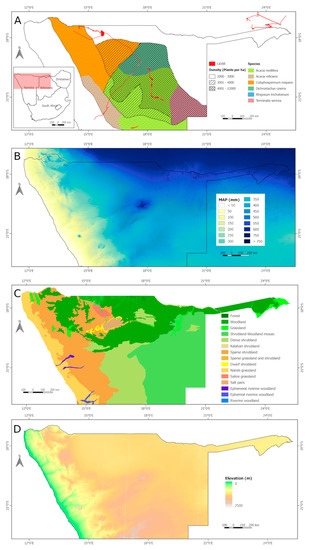