On the Interest of Optical Remote Sensing for Seasonal Snowmelt Parameterization, Applied to the Everest Region (Nepal)
Previous Article in Journal

Livestock production is a socioeconomic linchpin in Mongolia and is affected by large-scale livestock die-offs. Colloquially known as dzuds, these die-offs are driven by anomalous climatic events, including extreme cold temperatures, extended snow cover duration (SCD) and drought. As average temperatures across Mongolia have increased at roughly twice the global rate, we hypothesized that increasing cold season surface melt including soil freeze/thaw (FT), snowmelt, and icing events associated with regional warming have become increasingly important drivers of dzud events as they can reduce pasture productivity and inhibit access to grazing. Here, we use daily brightness temperature (Tb) observations to identify anomalous surface melt and icing events across Mongolia from 2003–2016 and their contribution to dzuds relative to other climatic drivers, including winter temperatures, SCD, and drought. We find a positive relationship between surface melt and icing events and livestock mortality during the fall in southern Mongolia and during the spring in the central and western regions. Further, anomalous seasonal surface melt and icing events explain 17–34% of the total variance in annual livestock mortality, with cold temperatures as the leading contributor of dzuds (20–37%). Summer drought showed the greatest explanatory power (43%) but overall had less statistically significant relationships relative to winter temperatures. Our results indicate that surface melt and icing events will become an increasingly important driver of dzuds as annual temperatures and livestock populations are projected to increase in Mongolia. View Full-Text
Keywords: Mongolia; snow cover; snow melt; freeze/thaw; climate change; passive microwave remote sensing Mongolia; snow cover; snow melt; freeze/thaw; climate change; passive microwave remote sensing
►▼ Show Figures 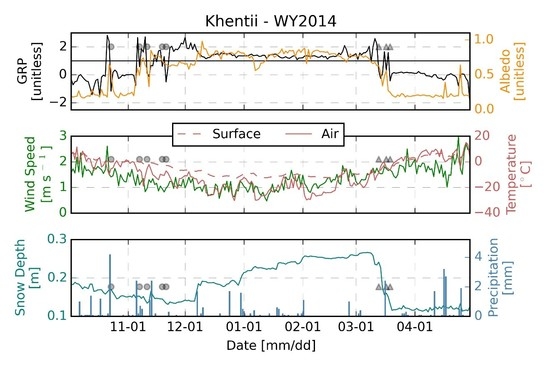