Wildfires on the Mongolian Plateau: Identifying Drivers and Spatial Distributions to Predict Wildfire Probability
Next Article in Special Issue

The main goal of the paper is to verify the impact of the absorption of European Union (EU) grants on land cover changes in Polish municipalities in the years 2012–2018. The selection of the research area was justified by the fact that Poland is the largest and significantly spatially differentiated transition economy in Central-Eastern Europe, recognised as a substantial beneficiary of EU accession in 2004. The time range of analysis was set as the result of a comparison of data availability in Corine Land Cover (CLC) and Statistics Poland. The CLC dataset referring to land cover and land use changes between 2012 and 2018 was used. The focus on modifications taking place within one of the main land cover groups at level 3 of detail was applied in this research. These changes were analysed as percentages referring to the area of the municipality and to the total area of changes in the investigated period. Two categories of EU grants were considered: total and infrastructural (granted under EU Operational Programme “Infrastructure and Environment”). Moreover, some control economic, social, demographic, institutional, infrastructural, and environmental variables were applied to better explain land cover changes. Moran’s local statistic was employed to detect spatial hot-spots of EU grants absorption, as well as hot-spots of land cover changes. Then, a collection of various variables related to determinants of land cover changes was set. Economic factors, including EU grants absorption, as well as factors related to accessibility, agrarian structure, demography, environment, and spatial planning were investigated. Principal Component Analysis (PCA) was employed to convert the set of all considered variables into a set of few uncorrelated predictors. Finally, Geographically Weighted Regression (GWR) was applied to describe the spatially varied impact of investigated determinants, including EU grants, represented by estimated principal components on land cover changes. View Full-Text
Keywords: EU funds; land cover; Corine; Poland EU funds; land cover; Corine; Poland
►▼ Show Figures 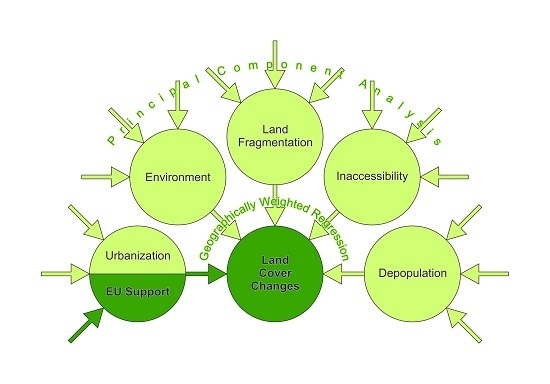