In recent years, there has been a preliminary research on monitoring rainfall information based on polarimetric Global Navigation Satellite System (GNSS) signals, which is a quite novel concept. After previous theoretical research on monitoring rain based on polarimetric phase shift of GNSS signals, the paper aims to detect rain using polarimetric GNSS signals from a ground-based experiment. Firstly, a conical horn antenna specially designed for receiving dual-polarized (H, horizontal, and V, vertical) GNSS signals was developed, and an experimental system for polarimetric GNSS rain detection was built. Then, taking Global Positioning System (GPS) satellites as signal source, a ground-based experiment was carried out at a mountain in Nanjing, where heavy rain tends to occur frequently in rainy season. Additionally, a data processing algorithm mainly following Padullés et al. (2016) to solve the problems of quality control, unlocking, hardware effect, phase ambiguity, multipath effect was applied independently to this ground-based data from the polarimetric GNSS rain detection system. Also, the multi-source data from nearby weather radar and weather stations was used for verification. Results from 14 GPS satellites show that the obtained phase shift is zero in all no-rain days while it is not zero during rainy days, which is in accordance with the actual situation. Compared with weather radar and rain gauges’ data, the results verify that the phase shift is caused by rain. Besides, when individual cases are examined, many show that their tendencies of accumulated phase shift are quite similar to that of a weather station’s rainfall data, even some correlation coefficients are up to 0.99. These demonstrate the reliability of our experimental system and the feasibility of the data processing algorithm. This study will provide technical support for future spaceborne experiment, which has promising applications in global rain monitoring. View Full-Text
Keywords: GNSS; rain; polarimetric phase shift; experimental research; statistical analysis GNSS; rain; polarimetric phase shift; experimental research; statistical analysis
►▼ Show Figures 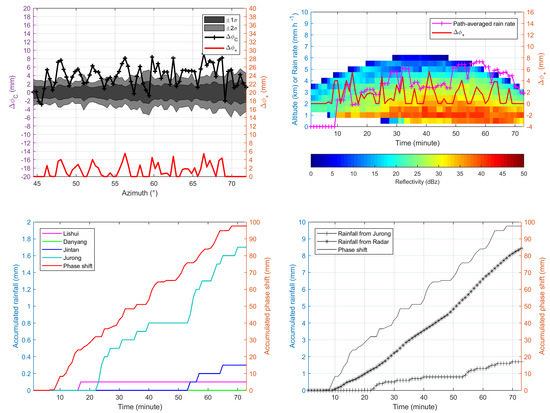