Eddies are ubiquitous oceanic features, which play an important role in global energy and material transport, and contribute greatly to nutrient and phytoplankton distribution, enhancing primary production in the ocean [1,2,3,4,5,6,7]. Local convergence (divergence) induced by a cyclonic (an anticyclonic) eddy due to the Coriolis effect by the Earth’s rotation results in an upwelling (a downwelling) at the eddy center. The effects of eddies on the hydrological characteristics of sea water affect global heat and freshwater redistribution, and climate change. Meridional heat transport by oceanic eddies are able to supplement the heat lost at higher latitudes [2,8,9]. Cyclonic eddies bring cold water rich with nutrients and chlorophyll from the deeper layers to the surface, thus affecting the distribution of photosynthetic phytoplankton, primary production and ultimately the accumulation of fish in the eddy area [10,11,12]. Based on the type of oceanic data, several eddy detection algorithms have been developed to be applied to oceanic data. These methods can be divided into Eulerian methods [3,13,14,15,16], Lagrangian methods [17] and hybrid methods [18,19]. In the present study, we try to apply an artificial intelligence (AI) technology to oceanic eddy detection using satellite remote sensing measured sea surface height data.
Deep learning is one of the latest trends in machine learning in the AI field [20,21]. Deep learning methods fit the distribution of training samples (the data used to build a model) through multiple layer neural networks, which can solve the local optimal problem in traditional neural networks [20]. The most important application of deep learning is the analysis of two-dimensional images. Treating sea surface height (SSH) data as a two-dimensional image, deep learning can be applied in oceanic eddies detection. According to the demand for eddy detection, semantic segmentation can be used to identify the oceanic eddies based on the SSH data.
Lguensat et al. [22] apply a deep learning algorithm in oceanic eddies detection. Cyclonic and anticyclonic eddies are identified from the SSH data based on the encoder–decoder network U-Net in the classic framework of semantic segmentation. However, the network structure used is relatively simple. Although the scaled exponential linear units and the dice loss are used to accelerate the training and to identify eddies, quantitative characteristics of detected eddies, such as eddy sizes, are not analyzed. Subsequently, Franz et al. [23] also use the encoder–decoder network to detect and track oceanic eddies. More network parameters are applied, but only the simple convolution module and the upsampling module are stacked. Du et al. [24] use deep learning to extract higher-level features and fused multi-scale features to detect oceanic eddies automatically based on synthetic aperture radar images.
The Pyramid Scene Parsing Network (PSPNet) is able to fuse semantic and detail features in the different layers and is applicable for oceanic eddy detection due to the diversity in the distribution, sizes and shapes of oceanic eddies. The PSPNet is adopted in the present study in order to adapt the recognition of multi-scale targets.
This manuscript is arranged as follows. In Section 2, we describe the AI technique and the traditional vector geometry-based eddy detection method (VG algorithm). Section 3 introduces the data used in this study. Section 4 presents the results using the AI algorithm and the comparison with using the VG algorithm. Section 5 discuses several specific situations for the AI algorithm to detect additional eddies. Finally, Section 5 gives the summary.

The neural network model used in this study is based on Deep Residual Net (ResNet) [25], which can better train in the deeper layers of the neural network. The depth of the learning network has a significant influence on the effect of classification and recognition. Deepening the network promotes learning. However, deepening of the network based on the stacking of the conventional network results in the disappearance of the gradient and leads to ineffective training. Shortcut connections are applied to the ResNet to solve the degradation problem and to obtain accuracy gains when the depth increases. A series of sensitive experiments performed by He et al. [25] show that a 101-layer ResNet can keep high complexity and can provide significant accuracy gains. Thus, a 101-layer ResNet is used for its significant learning ability in oceanic eddies detection.

The PSPNet [26] incorporates the pyramid pooling module and the reduced convolution, which can make full use of the global scene to capture more details of the context information between the different category labels.
Information from different sub-regions can be efficiently fused with the pyramid pooling module [27,28]. In this study, four different pyramid scales are applied to fuse features in the module. To create a single bin output, the coarsest level is the global pooling. The following pyramid level divides the feature map into different sub-regions and generates pooled representation for different locations. In order to maintain the weight of the global feature, different size convolution layers are applied after each pyramid level, decreasing the dimension of context representation to 1/N of the original (where N is the level size of the pyramid). Then, the low-dimension feature maps are up-sampled to obtain the same size features as the original. Finally, different feature levels are combined as the pyramid pooling global feature. The number of pyramid levels and the size of each level can be adjusted. In this study, a four-level pyramid pooling module with bin sizes of 1 × 1, 2 × 2, 3 × 3 and 6 × 6 grids, respectively, is applied.
Dilated convolution [28] can expand the receptive field without losing the size of feature layers. Multi-scale context features can be obtained from the dilated convolution to a feature layer with different dilation factors. Features extracted at different sampling rates are post-processed and fused separately to produce the final result. The dilated convolution is able to complete the basic network structure and to capture more global information of the images, hence optimizing the image semantic segmentation.
Sea surface height anomalies (SSHA) data labeled with eddy information are used as the training data. Figure 1 shows the configuration of the PSPNet. A 101-level ResNet (ResNet101) model with a dilated network strategy [29,30] is implemented to an input SSHA image to extract the feature map at different levels. The final feature map is reduced to 1/8 of the input image. The pyramid pooling module is then employed to obtain context information. A four-level pyramid fuses the images at the different sizes as the global prior. The prior is connected to the original feature and a convolution layer to generate the final prediction. The PSPNet program, which is proposed by Zhao et al. [26], is publicly available and it can be obtained from https://github.com/hszhao/PSPNet.

Eddies are identified from daily SSHA data with a spatial resolution of 1/4° × 1/4°. The data, obtained from Copernicus Marine Environment Monitoring Service (CMEMS, http://marine.copernicus.eu), is a global product from multiple satellite altimeter along-track data. The SSHA data in the period from 2011 to 2015 are used in this study. The SSHA data are linearly interpolated into 1/8° to make the eddy field extend for a larger number of grid points in order to further improve the performance of the eddy detection scheme [32]. The SSHA data from 2011 to 2014 are used as the training data containing the labels of eddy information, while the 2015 data are used as the validation set.
This study focuses on the North Pacific Subtropical Countercurrent (STCC, 15°N~30°N, 115°E~150°W), covering the area from east of the Luzon Strait to the Hawaii Islands, as shown in Figure 2. As an example, Figure 2 shows a snapshot of eddy distribution detected by the VG scheme.

In the VG algorithm, the maximum closed streamfunction curve is defined as the boundary of a detected eddy, so the eddy area may be overestimated and may include several eddy centers. From the eddies identified by the VG algorithm on 23 February 2015 and 7 June 2015, shown in Figure 10a,d we found that there are two SSHA maximums inside the eddy boundaries. Using the PSPNet algorithm, the overestimated eddies are divided into several smaller ones (Figure 10b,e), which are more consistent with the geostrophic currents (Figure 10c,d).

Due to the data selection, sometimes a half eddy appears at the edge of the study area. The closed steamfunction curve cannot be found based on the VG algorithm. Thus, a half eddy is not able to be identified by the conventional algorithm (Figure 11a,d). However, the PSPNet algorithm combines the global and detail feature information for oceanic eddy identification, and eddies can be detected with incomplete information using the AI-based method (Figure 11b,e), which can also be validated from the geostrophic currents (Figure 11c,f).
The criteria in the VG algorithm have strict requirements for the structures and patterns of the currents, which make oceanic eddies without significant features undetectable. In this study, we did not set many constraints for the AI-based algorithm. Thus, more oceanic eddies with short lifetimes or with no obvious feature information are also identified by the PSPNet algorithm.

The PSPNet algorithm, which includes a pyramid pooling module and dilated convolution, not only fuses semantic and detail features at different levels, but also captures more global and local information of the images. Therefore, the PSPNet algorithm is applicable for oceanic eddies detection. In this study, SSHA data from 2011 to 2014 with the label of eddy information extracted by the VG algorithm in the STCC region are used as the training data, and SSHA data in 2015 are used for the validation dataset. The results of eddies identified from this AI-based method are well compared with those using the traditional VG algorithm. The PSPNet algorithm is able to detect more oceanic eddies than the VG method, especially for small-scale eddies. There are three specific scenarios where only the PSPNet algorithm detects additional eddies. Therefore, the PSPNet algorithm is applicable to oceanic eddy detection, which has significant implications for the AI technique to be applied into physical oceanography studies. This AI-based eddy detection algorithm can be applied in other oceanic regions, not only in the current study area. The AI-based algorithms can also be applied to identify more physical features, i.e., oceanic fronts, internal waves and ship wakes, from different marine data.

The altimeter products were supported by the Copernicus Marine Environment Monitoring Service. 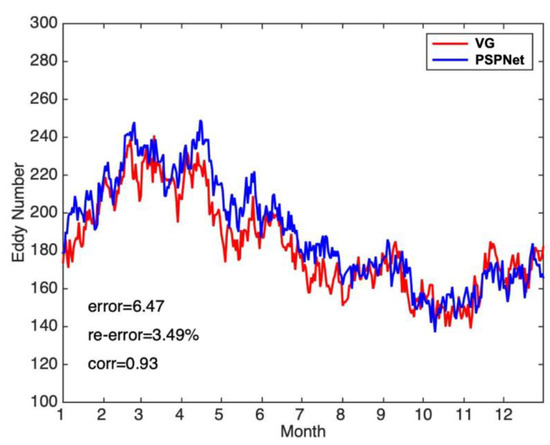 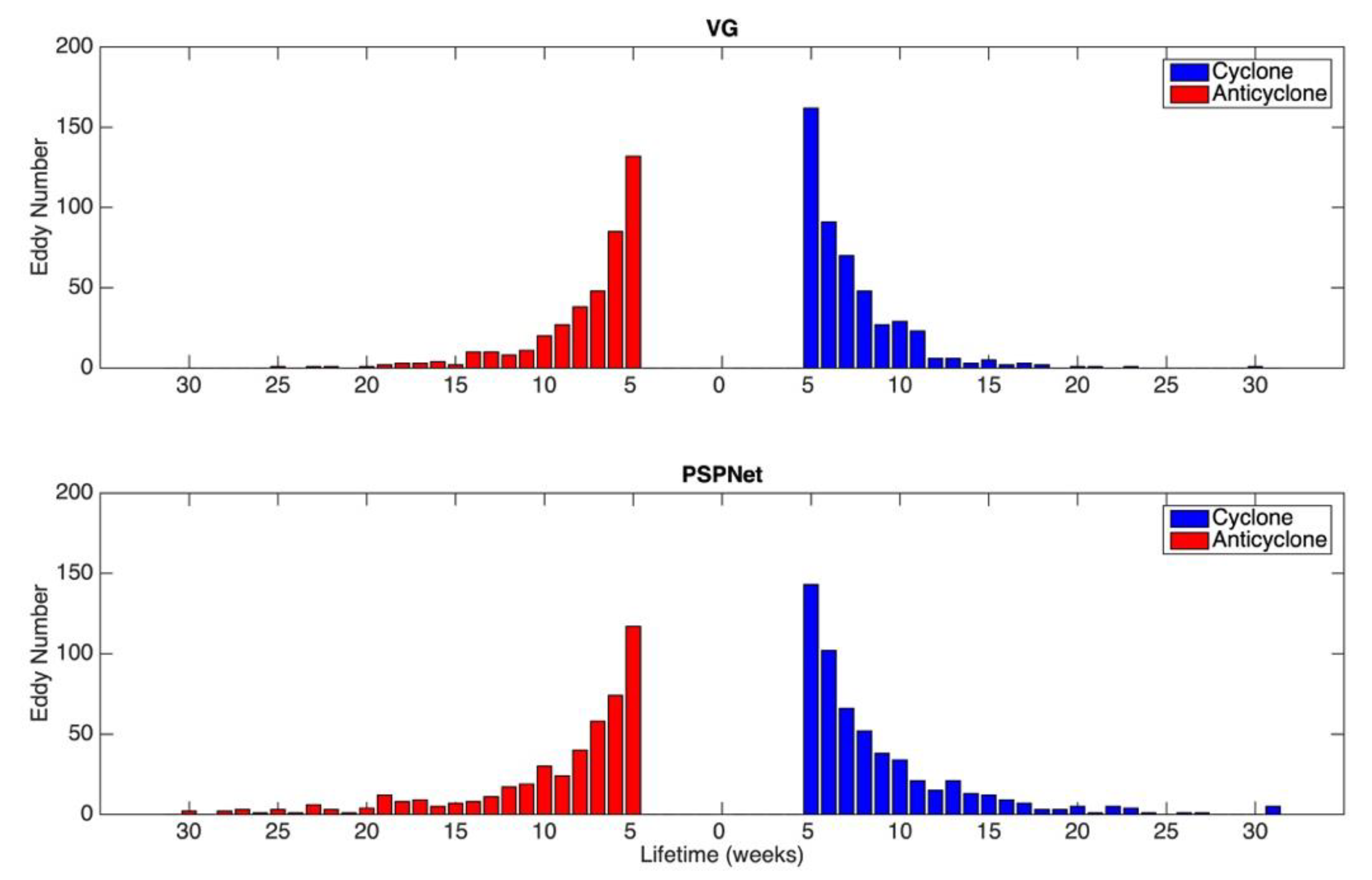 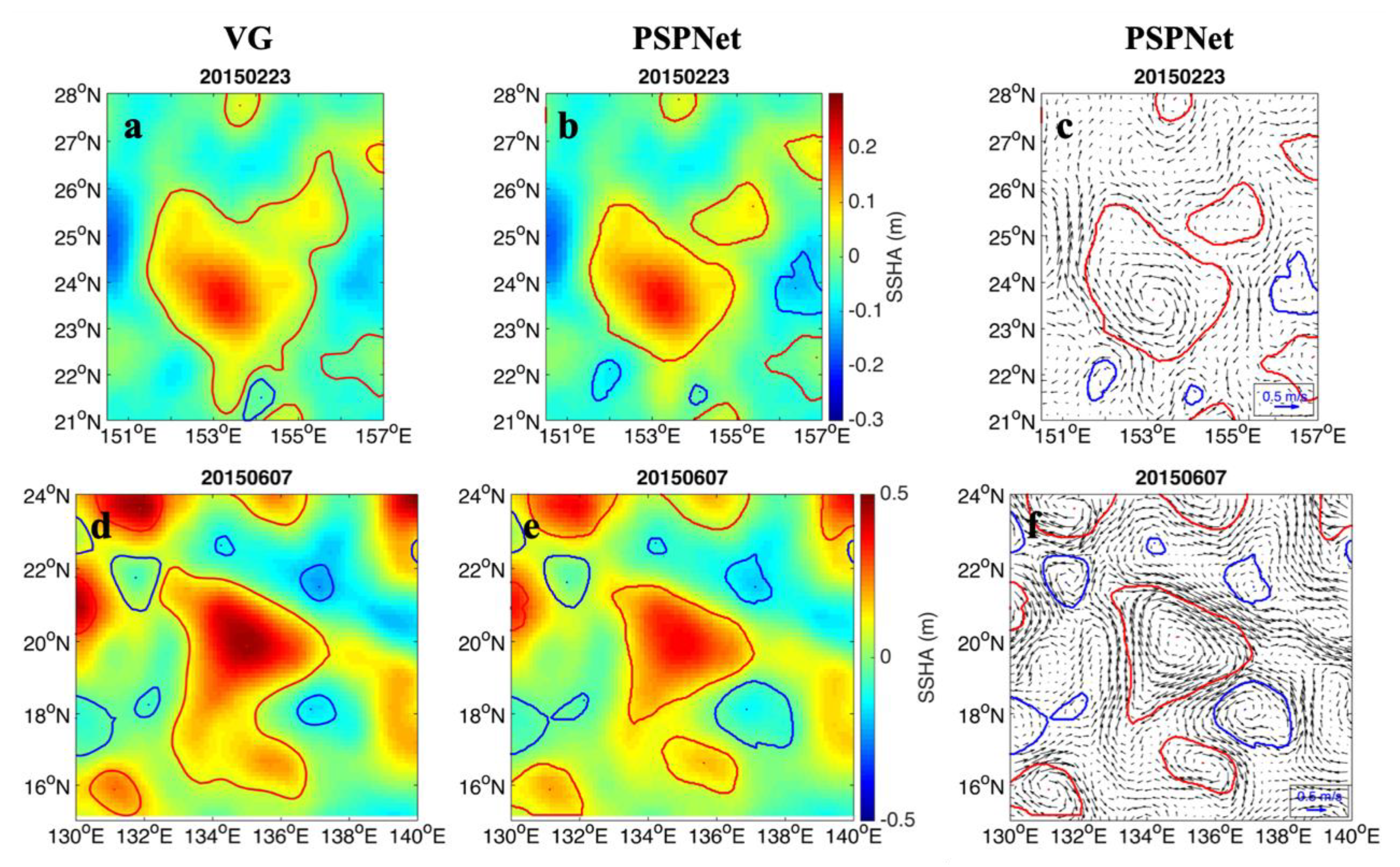