Over the past two decades, persistent occurrences of harmful algal blooms (HAB; Karenia brevis) have been reported in Charlotte County, southwestern Florida. We developed data-driven models that rely on spatiotemporal remote sensing and field data to identify factors controlling HAB propagation, provide a same-day distribution (nowcasting), and forecast their occurrences up to three days in advance. We constructed multivariate regression models using historical HAB occurrences (213 events reported from January 2010 to October 2017) compiled by the Florida Fish and Wildlife Conservation Commission and validated the models against a subset (20%) of the historical events. The models were designed to capture the onset of the HABs instead of those that developed days earlier and continued thereafter. A prototype of an early warning system was developed through a threefold exercise. The first step involved the automatic downloading and processing of daily Moderate Resolution Imaging Spectroradiometer (MODIS) Aqua products using SeaDAS ocean color processing software to extract temporal and spatial variations of remote sensing-based variables over the study area. The second step involved the development of a multivariate regression model for same-day mapping of HABs and similar subsequent models for forecasting HAB occurrences one, two, and three days in advance. Eleven remote sensing variables and two non-remote sensing variables were used as inputs for the generated models. In the third and final step, model outputs (same-day and forecasted distribution of HABs) were posted automatically on a web map. Our findings include: (1) the variables most indicative of the timing of bloom propagation are bathymetry, euphotic depth, wind direction, sea surface temperature (SST), ocean chlorophyll three-band algorithm for MODIS [chlorophyll-a OC3M] and distance from the river mouth, and (2) the model predictions were 90% successful for same-day mapping and 65%, 72% and 71% for the one-, two- and three-day advance predictions, respectively. The adopted methodologies are reliable at a local scale, dependent on readily available remote sensing data, and cost-effective and thus could potentially be used to map and forecast algal bloom occurrences in data-scarce regions. View Full-Text
Keywords: Karenia brevis; harmful algal bloom (HAB); moderate resolution imaging Spectroradiometer (MODIS); prediction; chlorophyll-a; multivariate regression Karenia brevis; harmful algal bloom (HAB); moderate resolution imaging Spectroradiometer (MODIS); prediction; chlorophyll-a; multivariate regression
►▼ Show Figures 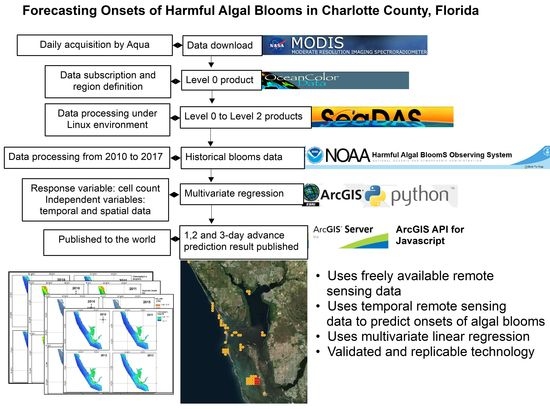