Desertification is a serious global environmental problem. Under the influence of natural environmental change and the anthropogenic causes of grassland degradation, ecological and environmental deterioration, as well as desertification have become more severe in Mongolia [1]. Plant species from 1961 to 2006 in the forest steppe, real steppe, mountain steppe, desert steppe, and desert regions in Mongolia were reduced by 50.0%, 44.7%, 30.3%, 23.8%, and 26.7%, respectively [2]. In 2007, more than 72% of Mongolia’s land was affected by desertification, with the range of desertification still expanding [3]. In 2017, the most current data from the Ministry of Natural Environment and Tourism of Mongolia indicated that 76.8% of the country’s land suffered varying degrees of desertification with desertification continuing to spread at a rapid rate, affecting the country’s renowned grasslands, including those in Dornod and Khentii provinces [4]. The increasing desertification problem on the Mongolian Plateau will have a strong effect on local sustainable development and may become the biggest obstacle to the transboundary cooperation in this area, for example, the China-Mongolia-Russia economic corridor issued by the governments of these three countries [5].
International research on desertification monitoring by remote sensing began in the 1970’s [6]. Initially, researchers used land degradation as reflected by the vegetation index to represent desertification [7,8,9]. In the 1980’s, studies found that land surface albedo is one of the most important parameters of the ground radiant energy balance, which determine the radiant energy absorbed by the underlying surface [10]. Some studies showed that increasing land surface albedo implies a degradation of land quality [11]. At the beginning of the 21st century, a number of studies found that texture features, moisture content, and surface albedo changed with a change in ground object types [12]. At the same time, some researchers found that monitoring changes in vegetation and land use was not the only way to measure desertification [13,14]. Zeng et al. used the albedo and NDVI (normalized difference vegetation index) to build the Albedo-NDVI feature space to conduct a study on desertification [15]. They found that multi-dimensional remote sensing data had clear biophysical significance and could reflect the surface coverage, hydrothermal combination, and the changes in land desertification.
However, due to the considerable influence of the soil background on the NDVI, the vegetation condition cannot be well expressed in areas with sparse vegetation. With a decrease in vegetation coverage, surface albedo and surface radiation temperatures increase accordingly. Therefore, the MSAVI (modified soil adjusted vegetation index) was introduced, which fully considers the bare soil line problem and can better eliminate or reduce the influence of the soil and vegetation canopy background [16]. After comparing the correlation coefficients of NDVI, MSAVI, and the grassland vegetation cover, Wu et al. found that the MSAVI was significantly correlated with grassland vegetation cover [17]. Feng et al. proposed building an Albedo-MSAVI feature space model by replacing NDVI with MSAVI and applying it to the study of soil salinization [18]. However, Vova et al. carried out land degradation monitoring in the Govi-Altai province of Mongolia and found that the changes in the MSAVI were not sufficient to evaluate the land degradation process [19]. This suggests that changes in pure MSAVI are not a major indicator of land degradation assessment. In fact, in the current research of desertification information extraction, studies on feature space are still dominated by the Albedo-NDVI feature space, and diverse feature spaces, such as the Albedo-MSAVI feature space, are rarely used.
In addition, due to different degrees of desertification, different topsoil textures are produced. More serious desertification corresponds to rougher the surface soil particle composition. Therefore, TGSI (topsoil grain size index) is recommended as an evaluation index of land degradation [20,21]. Lamchin et al. used NDVI, TGSI, and albedo as representative indicators of vegetation biomass, landscape pattern, and micro-meteorology, respectively. Then, desertification information extraction was conducted on the Hogno Khaan Nature Reserve in Mongolia to complete a dynamic analysis of desertification [22]. In 2017, Lamchin et al. found that the highest correlations were between TGSI and albedo at all levels of desertification [23]. This provided a basis for constructing the Albedo-TGSI feature space model. Combined with the above information, it can be seen that the previous studies of desertification information extraction are mainly based on the combination of multiple indexes or on a single feature space model, which lacks the comprehensive evaluation ratio of various special space models. Determining what kind of feature space is suitable for the extraction of desertification information regarding the Mongolian Plateau remains a scientific problem that needs to be solved.
In response to this challenge, our study analyzed the effects and applicability of different feature space models in the extraction of desertification information, with the goal of finding appropriate extraction approaches for desertification relating to the Mongolian plateau. We used 30-m resolution remote sensing images to invert the NDVI, MSAVI, TGSI, and albedo data of the study area in Mongolia and investigated the desertification information based on the feature space models of Albedo-NDVI, Albedo-MSAVI, and Albedo-TGSI. By comparing and analyzing the results, we attempted to find the reasonable model(s) under different vegetation cover conditions. This study was expected to provide a reference for the methods used for the dynamic monitoring of desertification on the Mongolia Plateau.

The study area is located at 44°25′N–50°53′N and 87°44′E–96°41′E in the Northwestern part of Mongolia (Figure 1), adjacent to the Xinjiang Uygur Autonomous Region of China, the Republic of Tuva, and the Republic of Altai, Russia. In terms of administrative divisions, the study area mainly falls under the provinces of Bayan-Olgii, Khovd, most of Uvs, parts of Zavkhan province, and Govi-Altai province. The region mainly consists of plateaus and mountains. The Altai mountains run through the entire study area and extend from the Northwest to the Southeast of the inner Mongolian plateau, resulting in a gradual lowering of the topography from West to East. This area has a typical continental climate, in which the lowest temperature in winter reaches −40 °C, the highest temperature in summer can rise to 40 °C, and the annual precipitation is 200–300 mm. The land cover types in this region are complex, including almost all land cover types in Mongolia, but mainly consist of bare land and desert grassland. In addition, the region is inhabited by a number of different ethnic groups, including the Halaha, Burbutt, Bayat, and Kazak. According to 2010 statistics, there were about 326,000 people in this region [24].

In this study, 19 Landsat 8 OLI (operational land imager) remote sensing images with 30 m resolution were selected. The imaging data were taken between June 2015 and October 2015, and the cloud coverage was less than 10%. Landsat 8 OLI images were obtained from the USGS website (United States Geological Survey) (http://earthexplorer.usgs.gov/).
Auxiliary data of this study include a vector map of Mongolia’s administrative division in 2013, a 2007 desertification status map of Mongolia [3], a 2015 classified map of Mongolia’s land cover [25], and the Google Earth online map. The land cover classification data with 30 m resolution was produced using the object-oriented classification method by the Institute of Geographic Sciences and Natural Resources Research, Chinese Academy of Sciences. In addition, the overall accuracy of the classified map of Mongolia’s land cover was 92.75%.

Long-term studies have shown that with an increase in desertification, the amount of surface vegetation gradually decreases, and the NDVI values decreases accordingly. Therefore, NDVI can be used as an important index to evaluate desertification. Albedo is one of the most important parameters of the radiation energy balance on the ground, and its values can be changed by soil moisture, vegetation cover, snow cover, and other land surface conditions. Field verification reveals that with an increase in the degree of desertification, the surface morphology changes, the surface roughness decreases, and the surface albedo increases continuously [26,27]. As shown in Figure 2 [28], there is a significant negative correlation between the NDVI and albedo in different desertification areas. In the figure, AC represents the high albedo line and reflects the drought situation, which is the limit of high albedo corresponding to the complete arid land under certain vegetation coverage [13]. BD represents the low albedo line, which involves a sufficient amount of surface water. A, B, C, and D represents four extreme states. In general, all types of ground objects are contained in the ABCD area and exhibit different spatial distribution patterns.
Therefore, the Albedo-NDVI feature space can be constructed to invert the variation characteristics of two-dimensional space composed of NDVI and albedo in the desertification process, and to effectively extract information regarding desertification.

2.3.2. The Construction of Feature Space

(1) Pre-processing
A number of steps were involved in the pre-processing of our data. First, remote sensing images selected were pre-processed, including radiometric correction, and atmospheric correction. Radiation correction is the process of eliminating all kinds of distortion in image data [29]. In this study, the radiometric calibration module in ENVI 5.1 was used to achieve radiation correction. Atmospheric correction is the process of eliminating the radiation error caused by atmospheric influence and retrieving the true surface reflectance of ground objects [30]. This was completed using the FLASSH module in ENVI 5.1. Before atmospheric correction, the sensor type, ground elevation, image generation time, atmospheric model parameters, and result of radiation correction should be added successively in this module. Finally, with the help of vector data from the Mongolian administrative division, the remote sensing images were clipped and mosaicked to synthesize the image map covering the entire study area.
(2) Feature space variables
Based on pre-processed Landsat 8 OLI images, we calculated the NDVI, MSAVI, TGSI, and albedo using the reflectance data of red, near infrared, blue, green, and short wave infrared band.
The formula for NDVI is as follows [31]: where NIR is near infrared band and RED is red band.
The formula for MSAVI is as follows [32]:
The formula for TGSI is as follows [33]: where BLUE is blue band and GREEN is green band.
The formula for albedo is as follows [34]: where SWIR1 and SWIR2 are the shortwave infrared bands.
(3) Data normalization processing
First, we identified the maximum and minimum values of NDVI, MSAVI, TGSI and albedo of the study area, and then used these to process the data normalization processing.
(4) Quantitative relation calculation
In order to further reveal the relationship between multiple feature space variables, we uniformly arranged 738 points in the whole study area, and the corresponding points values of NDVI, MSAVI, TGSI, and albedo were extracted. Then, SPSS software was used for the statistical regression analysis of the four feature space variables and to investigate their quantitative relations with each other. Finally, we selected three groups of highly correlated feature space variables to construct the feature space models of Albedo-NDVI, Albedo-MSAVI, and Albedo-TGSI.

We wish to thank the editor of this journal and the anonymous reviewers during the revision process. 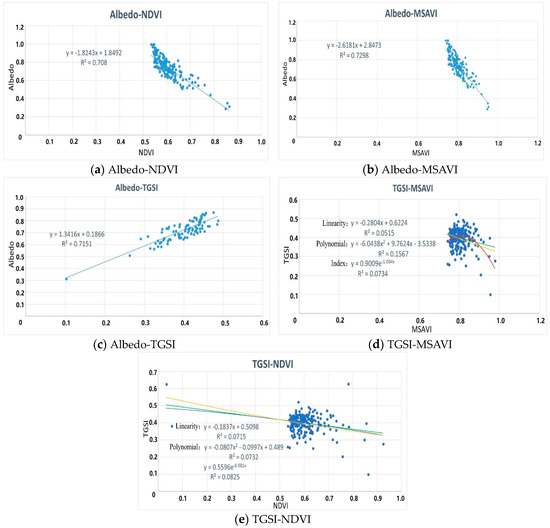 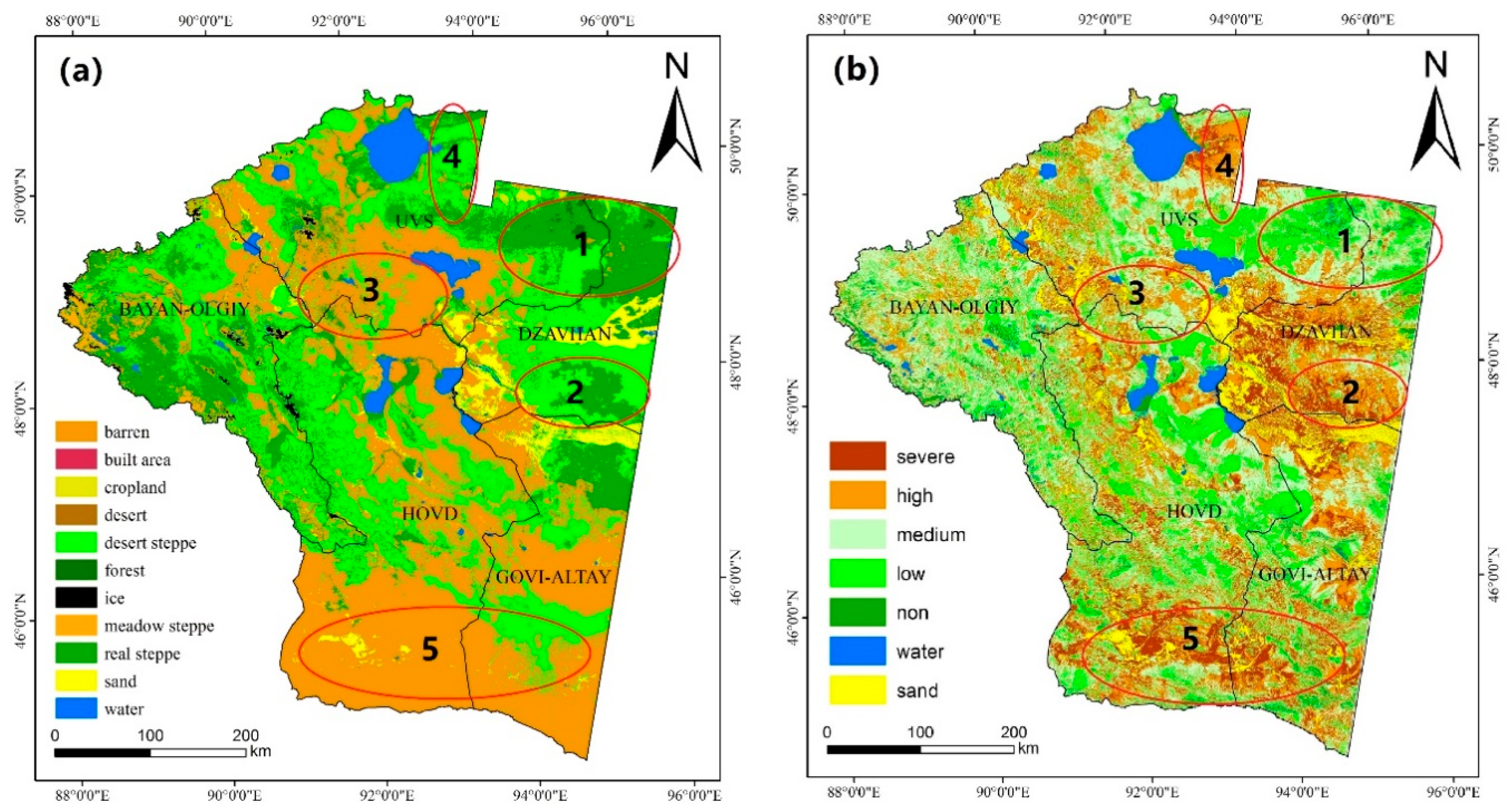