Evaluation of Satellite-Based Precipitation Products from IMERG V04A and V03D, CMORPH and TMPA with Gauged Rainfall in Three Climatologic Zones in China

A critical evaluation of the newly released precipitation data set is very important for both the end users and data developers. Meanwhile, the evaluation may provide a benchmark for the product’s continued development and future improvement. To these ends, the four precipitation estimates including IMERG (the Integrated Multi-satellitE Retrievals for the Global Precipitation Measurement) V04A, IMERG V03D, CMORPH (the Climate Prediction Center Morphing technique)-CRT and TRMM (the Tropical Rainfall Measuring Mission) 3B42 are systematically evaluated against the gauge precipitation estimates at multiple spatiotemporal scales from 1 June 2014 to 30 November 2015 over three different topographic and climatic watersheds in China. Meanwhile, the statistical methods are utilized to quantize the performance of the four satellite-based precipitation estimates. The results show that: (1) over the Tibetan Plateau cold region, among all products, IMERG V04A underestimates precipitation with the largest RB (−46.98%) during the study period and the similar results are seen at the seasonal scale. However, IMERG V03D demonstrates the best performance according to RB (7.46%), RMSE (0.44 mm/day) and RRMSE (28.37%). Except for in summer, TRMM 3B42 perform better than CMORPH according to RMSEs, RRMSEs and Rs; (2) within the semi-humid Huaihe River Basin, IMERG V04A has a slight advantage over the other three satellite-based precipitation products with the lowest RMSE (0.32 mm/day) during the evaluation period and followed by IMERG V03D, TRMM 3B42 and CMORPH orderly; (3) over the arid/semi-arid Weihe River Basin, in comparison with the other three products, TRMM 3B42 demonstrates the best performance with the lowest RMSE (0.1 mm/day), RRMSE (8.44%) and highest R (0.92) during the study period. Meanwhile, IMERG V03D perform better than IMERG V04A according all the statistical indicators; (4) in winter, IMERG V04A and IMERG V03D tend to underestimate the total precipitation with RBs (−70.62% vs. −6.47% over the Tibetan Plateau, −46.92% vs. −0.66% over the Weihe River Basin, respectively); and (5) overall, except for IMERG V04A in Tibetan Plateau, all satellite-based precipitation captured the gauge-based precipitation well over the three regions according to RRMSEs, Rs and Rbs during the study period. IMERG V03D performs better than its predecessors-TRMM 3B42 and CMORPH over the Tibetan Plateau region and the Huaihe River Basin, while IMERG V04A only does so over the latter. Between the two IMERG products, IMERG V04A does not show an advantage over IMERG V03D over the Tibetan Plateau region and the Weihe River Basin. In particular, over the former, IMERG V04A performs far worse than IMERG V03D. These findings provide valuable feedback for both IMERG algorithm developers and data users. View Full-Text
Keywords: GPM; IMERG; CMORPH; TRMM; precipitation GPM; IMERG; CMORPH; TRMM; precipitation
►▼ Show Figures 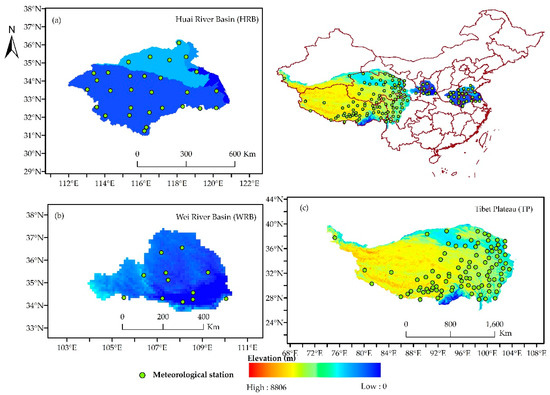