This paper deals with bistatic subsurface probing of a horizontally layered dielectric half-space by means of ultra-wideband electromagnetic waves. In particular, the main objective of this work is to present a new method for the solution of the two-dimensional back-scattering problem arising when a pulsed electromagnetic signal impinges on a non-uniform dielectric half-space; this scenario is of interest for ground penetrating radar (GPR) applications. For the analytical description of the signal generated by the interaction of the emitted pulse with the environment, we developed and implemented a novel time-domain version of the coupled-wave Wentzel-Kramers-Brillouin approximation. We compared our solution with finite-difference time-domain (FDTD) results, achieving a very good agreement. We then applied the proposed technique to two case studies: in particular, our method was employed for the post-processing of experimental radargrams collected on Lake Chebarkul, in Russia, and for the simulation of GPR probing of the Moon surface, to detect smooth gradients of the dielectric permittivity in lunar regolith. The main conclusions resulting from our study are that our semi-analytical method is accurate, radically accelerates calculations compared to simpler mathematical formulations with a mostly numerical nature (such as the FDTD technique), and can be effectively used to aid the interpretation of GPR data. The method is capable to correctly predict the protracted return signals originated by smooth transition layers of the subsurface dielectric medium. The accuracy and numerical efficiency of our computational approach make promising its further development.
Keywords: ground penetrating radar; electromagnetic propagation in nonhomogeneous media; time-domain analysis ground penetrating radar; electromagnetic propagation in nonhomogeneous media; time-domain analysis

In this subsection, we resume the simplified 1D-probing scheme proposed in [30] to explain the basis of our approach.
Let us consider the 1D propagation of an electromagnetic pulse, with electric field , in a non-uniform half-space characterized by a real-valued relative permittivity profile and a vacuum magnetic permeability (i.e., the half-space is assumed to be a lossless non-magnetic medium). Here and in the following, t is the time, z is the spatial coordinate and c is the light velocity in vacuum. This phenomenon is governed by the wave equation where is introduced for convenience, so that . The source is in . The trivial initial conditions and in , , and a non-homogeneous boundary condition given by define a transient field generated by the pulse entering the non-uniform half-space with The total wave field at , can be written as , where is the cumulative backscattered signal born on the subsurface permittivity gradients.
To find a unique solution to the boundary-value problem, the radiation condition has to be imposed, excluding the waves coming from . In Equation (3), . The application of the Fourier integral transform reduces Equation (1) to the 1D Helmholtz equation or to an equivalent set of first-order ordinary differential equations (ODE) [29] with Equations (6) govern the amplitudes and of the direct and backward waves in the total field representation valid for The equation set (6) can be solved iteratively, starting from . The first approximation gives
A backward Fourier transform yields an explicit formula relating the initial pulse with the total signal , that can be measured in . In particular, the half-space response to the input electromagnetic pulse is
Equation (9), having the evident meaning of a sum of partial reflections due to the permittivity gradients, can be considered as an integral equation for the unknown function . As shown in [30], this equation, having a convolution form, can be solved by exploiting the Fourier–Laplace transform, yielding a parametric solution to the 1D inverse problem where and are the Fourier transforms of the initial pulse and received backscattered signal , calculated accoding to Equation (4).

Equations (31)–(33) provide an explicit approximate representation of the time-domain Green function for an arbitrary permittivity profile , which, in combination with the Duhamel principle [34], solves the electromagnetic forward problem for an arbitrary probing pulse. The key point in the numerical implementation resides in the evaluation of the following functional equation, to determine the poles .
By inspecting Equation (35), it can be noted that one of its solutions coincides with the geometro-optical (GO) one, rendering a minimum to the Fermat functional: (optical path from an antenna element in , , to the receiver point in with intermediate specular reflection from plan).
By differentiating Equation (36) with respect to and by equating the derivatives and to zero, we have:
Here, is the solution of the second Equation (37), being the result of its substitution into the last line of Equation (37), which, apparently, assures the fulfillment of the identity in Equation (35).
As follows from the laws of geometrical optics [19], Equation (37) correspond to a ray trajectory in a horizontally-layered medium, which starts from at an angle with respect to the z-axis and comes to the observation point after specular reflection from a virtual mirror (see Figure 3). This trajectory lies in the vertical plane and, evidently, provides the shortest optical path from the line current source to the observation point, among ones touching the given level .
From physical considerations, one may expect that the main contribution to the time-domain Green function is due to the values of closest to GO. Ray interpretation suggests an efficient method to solve the functional Equation (36). Let us assume . Substitution of these quantities into Equation (36) gives an approximation, valid for small values of :
By taking into account the GO Equation (36) and defining we get . As only the poles lying in the right half-plane give a contribution, we define and obtain their approximate representation:
Now, it is easy to calculate the functions in Equations (32) and (34): and the kernel of the time-domain Green function:
To conclude, in this quasi-optical approximation the search for the poles from Equation (35), which depend on the virtual reflection depth and normalized time , is reduced to the calculation of the horizontal GO impulse, depending only on , and to the computation of the integrals and via the explicit formulas given in Equations (37) and (39).

The above analysis reduces our time-domain back-scattering problem to the standard geometrical optics. This provides an efficient modeling tool for the GPR probing of a horizontally layered subsurface media. However, the obtained integral representation Equation (42) is still too heavy for practical applications and for attempts to solve inverse problems. A further simplification can be achieved if the separation between the transmitter and receiver antennas is relatively small. Such a situation is encountered when probing deeper layers of the subsurface medium () with a typical antenna offset . In this case, the angles of arrival are small, we can consider as a small parameter and look for the roots of Equation (35) by applying the following approximation: where
In such a way, the equation becomes a quadratic one: having two roots in the right half-plane:
The functions introduced above take the form and the kernel of the integral Equation (28) becomes:
Thus, for a moderate separation between the antennas, , the essential component of the Green function, responsible for the signal reflected by the permittivity gradients, can be written in a closed form:
Here, is a root of the equation , corresponding to the depth level from where the partly reflected signal starts towards the receiver, along a geometric-optical path. In virtue of the assumption , our approximation is similar to the method of coupled parabolic equations that was used by Claerbout in the problem of seismic prospecting [35].

To carry out an accurate numerical quadrature for Equation (49), it is necessary to take into account the algebraic singularity of the kernel at the end point .
Let us introduce the notation , and a uniform discretization grid , where corresponds to . By decomposing the integral in Equation (49) into a sum of integrals over the intervals , we have:
By expanding the functions , and in Taylor series, we find: where , , etc.
Thus, we have reduced Equation (49) to a sum of standard algebraic integrals that may have singularity of the order :
In Equation (52), the following quantities have been introduced:
By substituting the well-known analytical expression of integrals Equation (52) into Equation (51), we obtain a numerical quadrature, accurate to and suitable to correctly describe weak singularity of the Green function on the reflected wave front:

We extended the coupled-wave Wentzel-Kramers-Brillouin method (“two-way WKB” approximation) to the case of Ground-Penetrating Radar (GPR) probing of a horizontally-layered dielectric half-space. In particular, we derived an analytical representation of the electromagnetic field excited by a synchronous ultra wideband current pulse in a thin wire stretched along the ground-air interface. A bistatic sounding scheme, commonly used in GPR surveys, was considered. A physical interpretation of the obtained solution was given in terms of geometrical optics and partial reflections from subsurface permittivity gradients. An efficient numerical algorithm was implemented, including an approximate solution of a complex eikonal equation and a high-precision quadrature of the arising singular integrals. Similarities with the coupled parabolic equation method were pointed out.
While our analytical approach is suitable to model the GPR sensing of shallower and deeper layers, the numerical implementation presented in this paper assumes a relatively small separation between the transmitter and the receiver, which allows to shorten the calculation times and makes our method suitable to be embedded into inversion techniques requiring the fast solution of a high number of forward-scattering problems. Specifically, Formulas (32–34) of Section 2.2 yield a general representation of the time-domain coupled-WKB Green function for arbitrary depths and antenna separation. It holds also for the geometric-optical approximation (42) of Section 2.3, valid for short pulses propagating within a narrow strip (“wave film”) behind the GO wave front. Only quasi-vertical approximation discussed in Section 2.4 and implemented in Section 3 requires the assumption of depths exceeding the separation between the transmitter and the receiver. This simplification is valid when modelling monostatic GPR systems (where the same antenna is used for transmitting and receiving signals), as well as bistatic systems if the probed layers are deep enough.
Numerical results of our method were compared with finite-difference time-domain (FDTD) calculations, with very good agreement. Then, two applications to real scenarios were presented. First, our technique was applied to the interpretation of GPR radargrams collected on Lake Chebarkul, in search of a fragment of the Chelyabinsk meteorite. We showed how numerical simulation helps to analyze the protracted return signals originated in smooth transition layers of subsurface dielectric medium. The second example suggests that our method can be used for the estimation of water content in lunar regolith, the upper layer of which contains smooth gradients of permittivity due to gradually increasing fraction of ice.
The good accuracy and numerical efficiency of our semi-analytical computational approach make promising its further development. The approach can be extended to the case of a half-space where the permittivity varies in two directions. Furthermore, we plan to take into account the dissipative and frequency-dispersive behavior of materials by using a complex-valued model of dielectric permittivity in the frequency-domain. The finite length of the antennas and a three-dimensional (3D) gradual variation of the medium parameters will be introduced in a 3D version of the algorithm. We also wish to explore possibilities of hybridization of our approach with FDTD and time-domain integral-equation methods, to capitalize on the strengths of each technique. 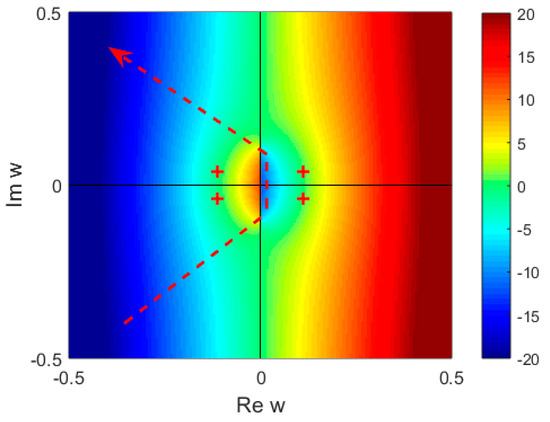 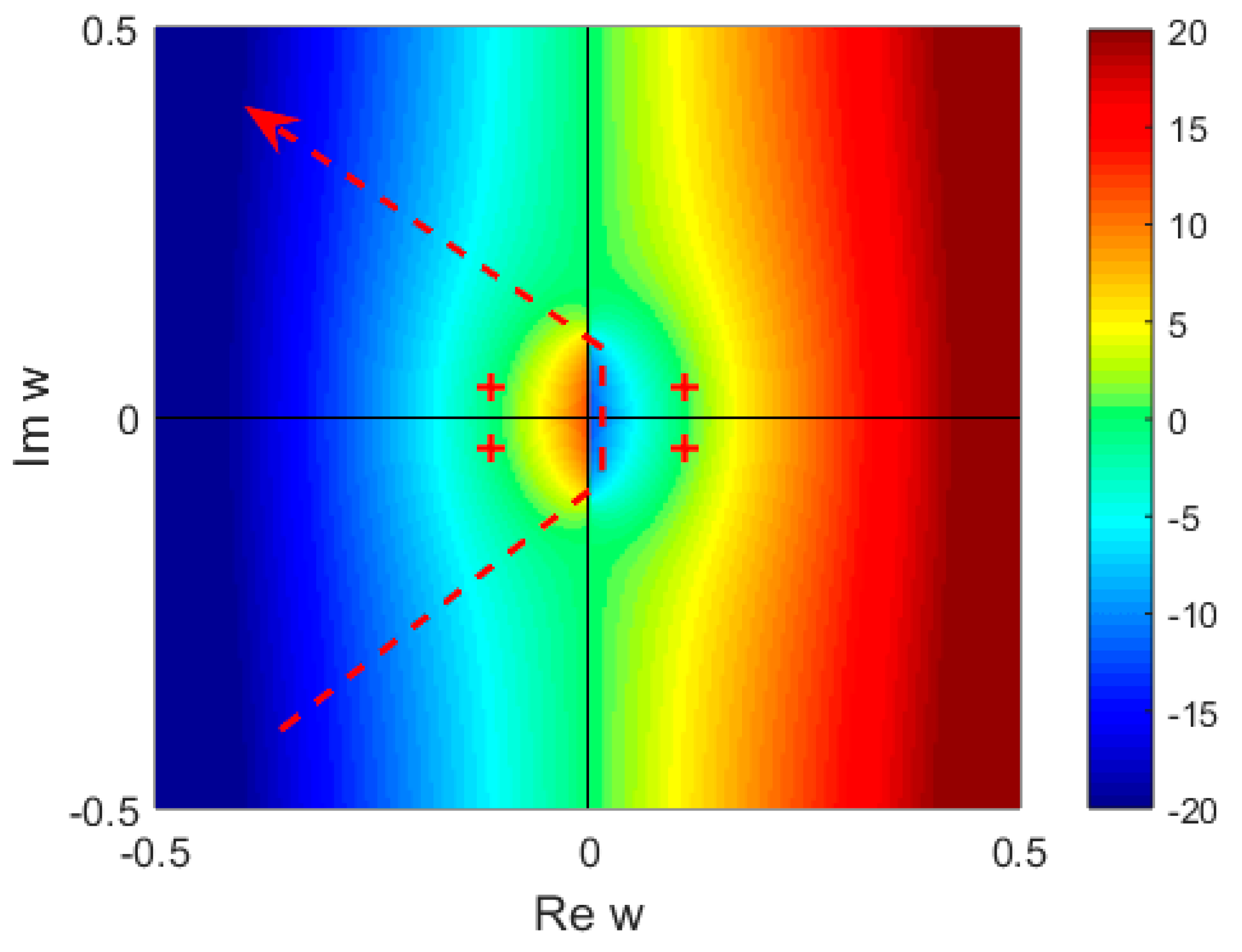 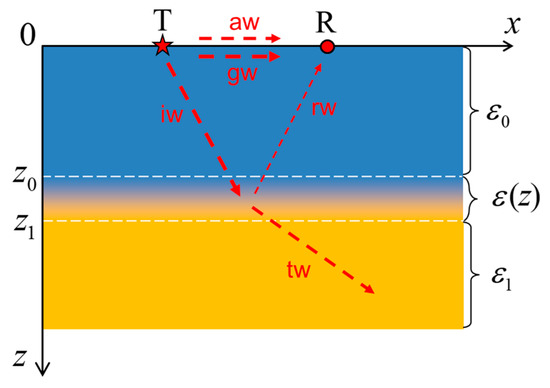 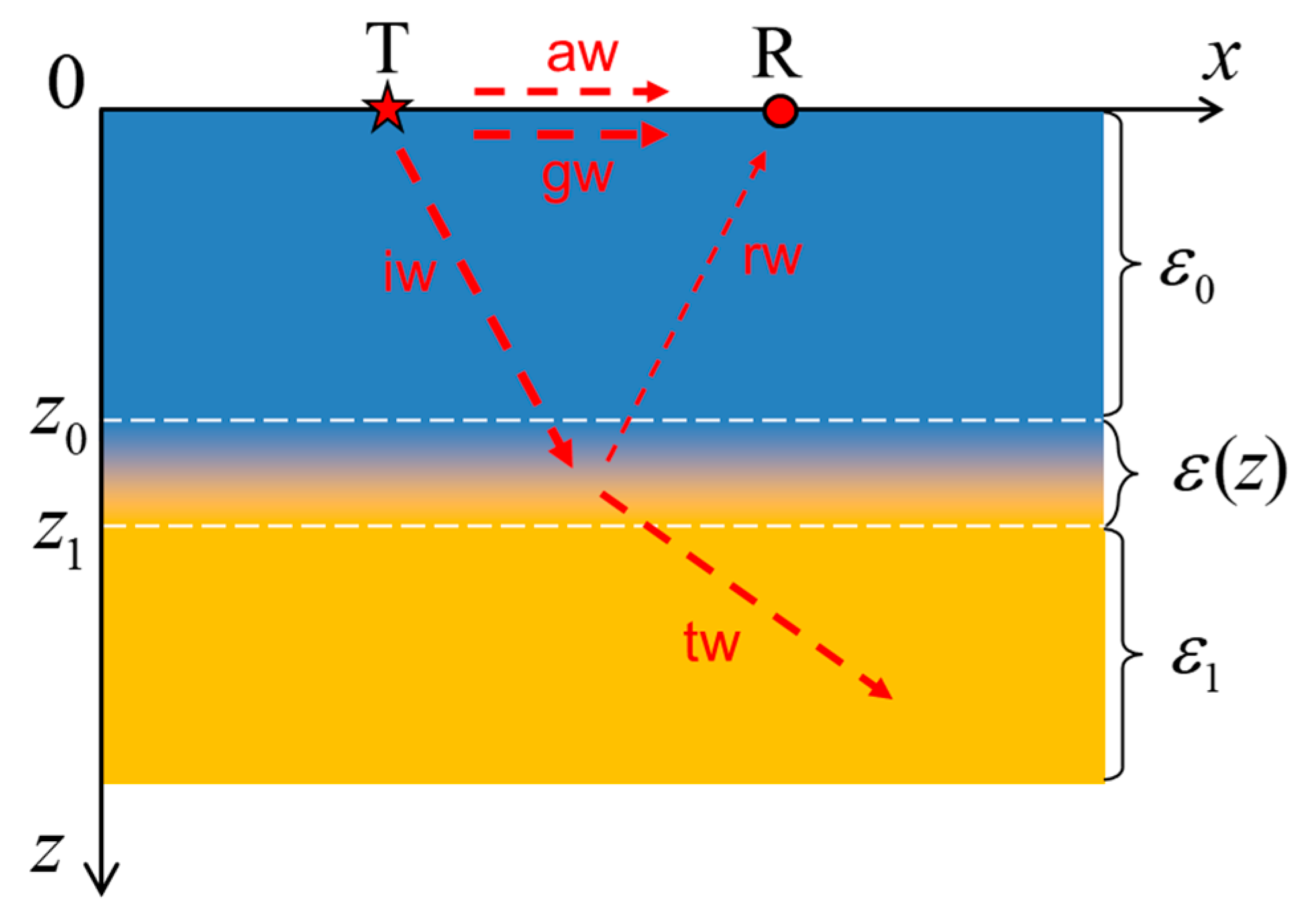 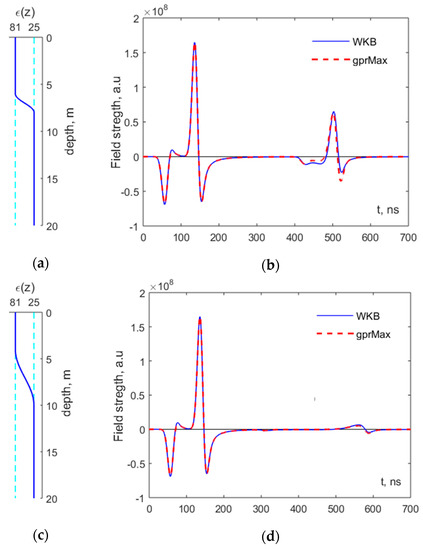 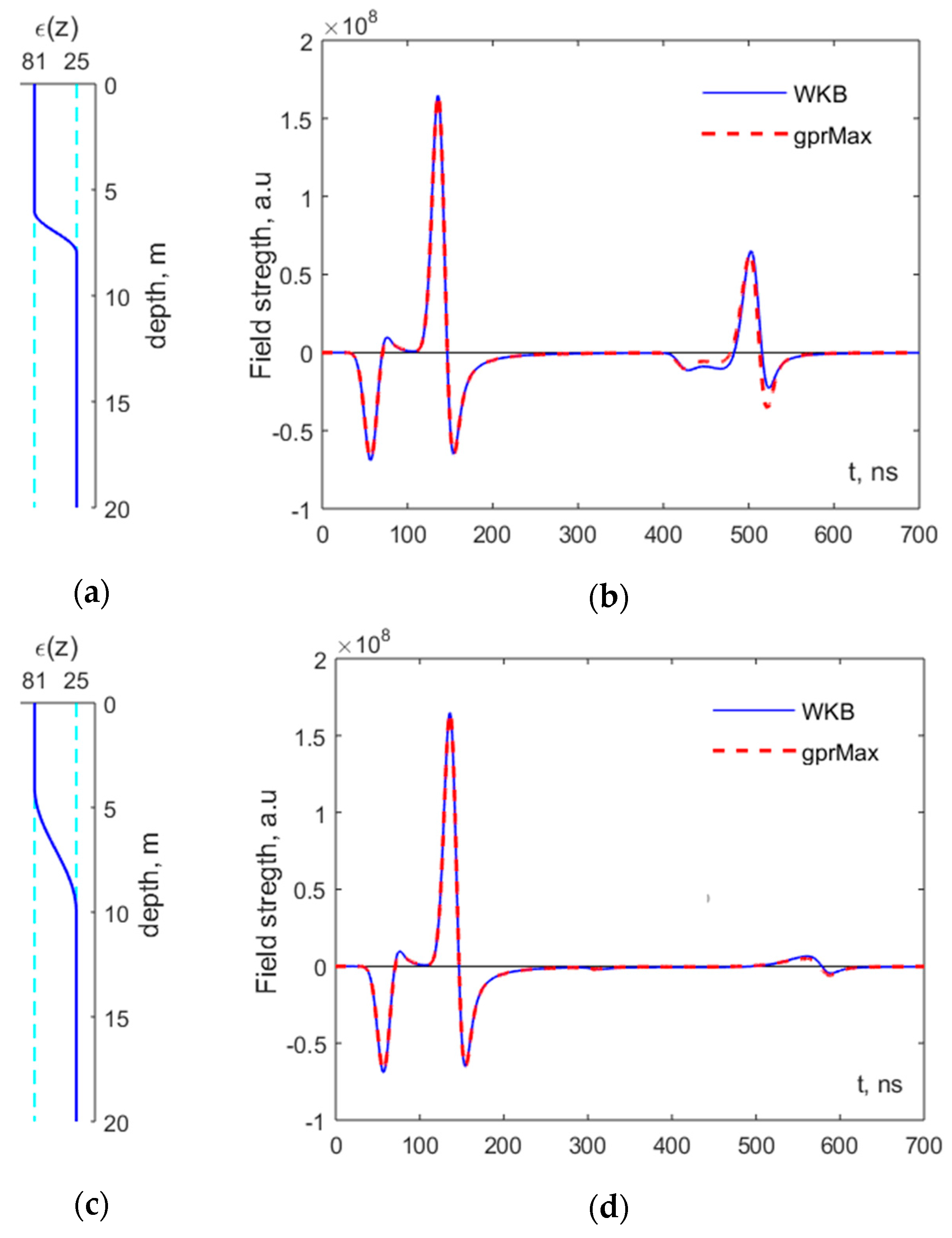 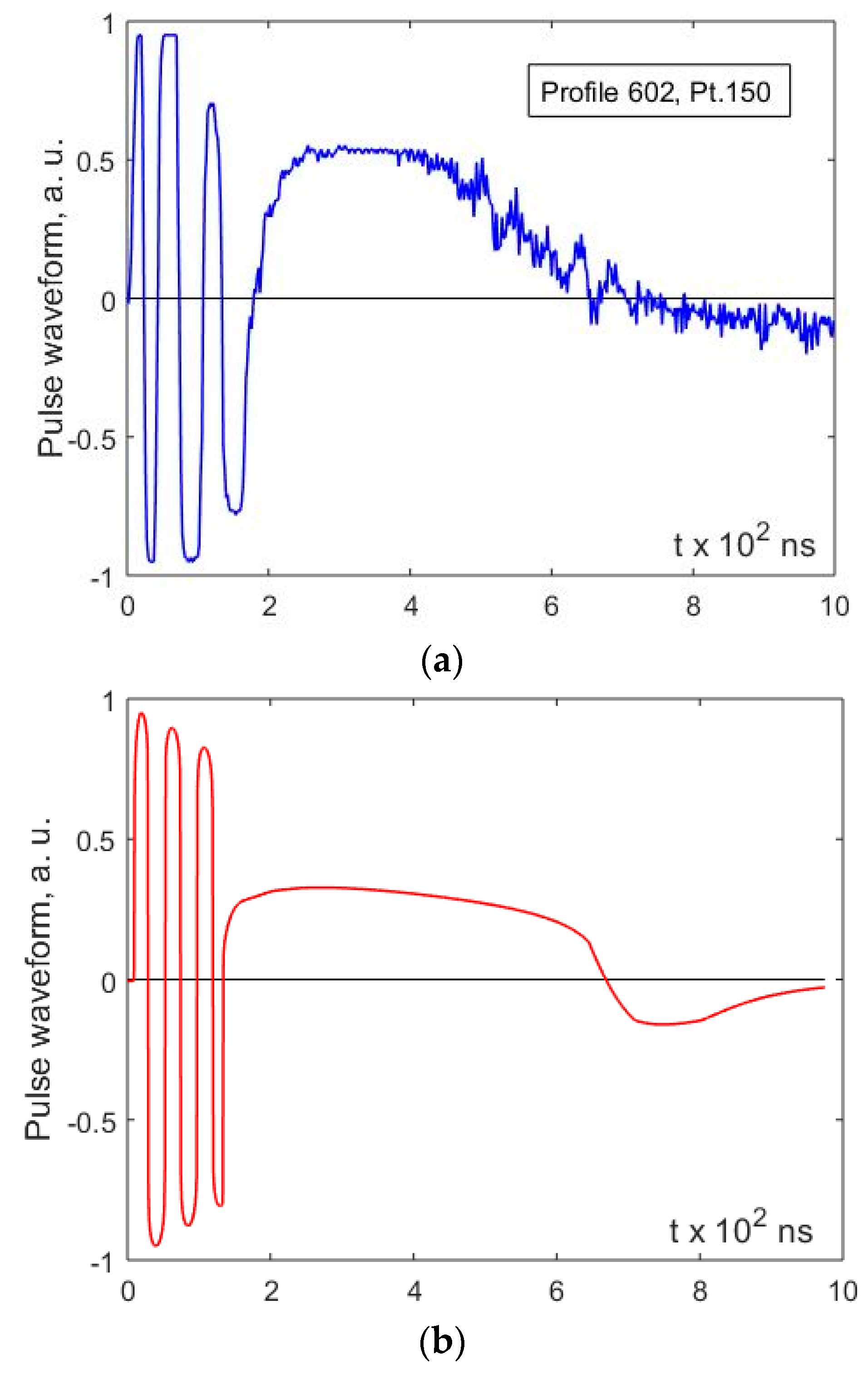 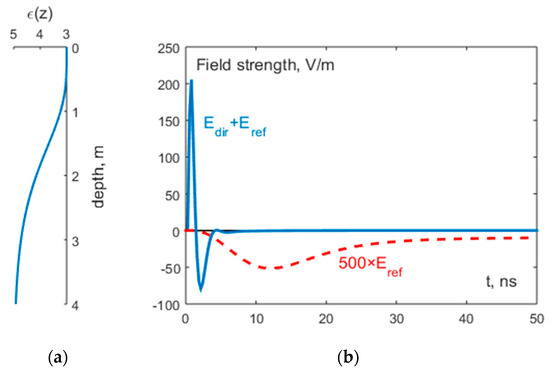 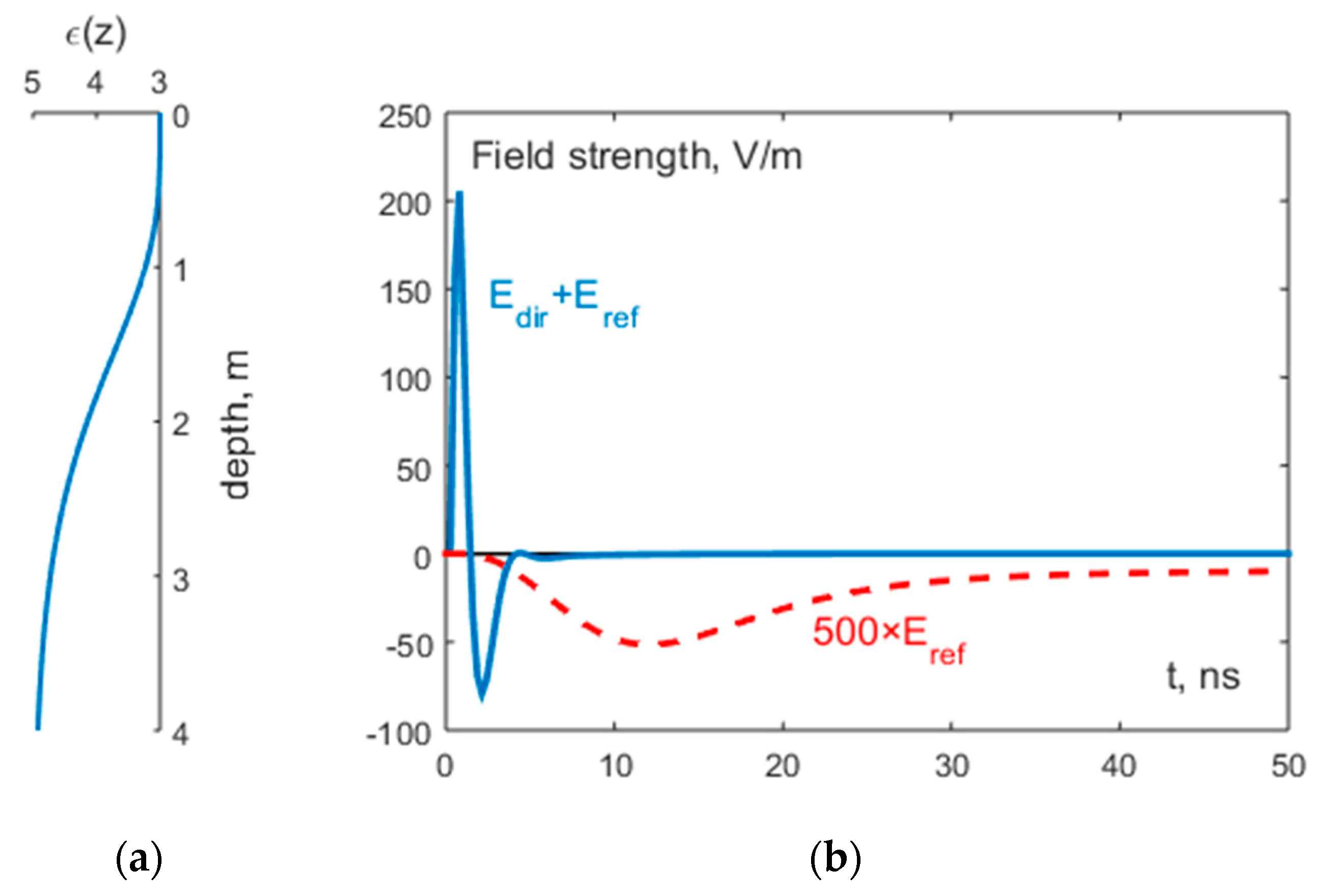