A Bamboo Treatment Procedure: Effects on the Durability and Mechanical Performance
Previous Article in Special Issue

Mapping Urban Expansion and Exploring Its Driving Forces in the City of Praia, Cape Verde, from 1969 to 2015

Urbanization challenges regional sustainable development, but a slight expansion mechanism was revealed in a plateau city. We have integrated the urban expansion process and analyzed its determinants in Lhasa (Tibet), and we provide insightful suggestions for urban management and planning for Lhasa. The full continuum of the urban expansion process has been captured using time-series of high-resolution remote sensing data (1990–2015). Four categories of potential determinants involved in economic, demographic, social, and government policy factors were selected, and redundancy analysis was employed to define the contribution rates of these determinants. The results illustrate that considerable urban expansion occurred from 1990 to 2015 in Lhasa, with the area of construction land and transportation land increasing at rates of 117.2% and 564.7%, respectively. The urban expansion in the center of Lhasa can be characterized as temperate sprawl from 1990 through 2008, primarily explained by governmental policies and investment, economic development, tourist growth, and increased governmental investment resulting in faster urban expansion from 2008 to 2015, mainly occurring in the east, south, and west of Lhasa. In contrast with other cities of China, central government investment and “pairing-up support” projects have played an important role in infrastructure construction in Lhasa. The miraculous development of the tourism industry had prominent effects on this economic development and urbanization after 2006, due to the running of the Tibetan Railway. An integrative and proactive policy framework, the “Lhasa development model”, having important theoretical, methodological, and management implications for urban planning and development, has been proposed. View Full-Text
Keywords: Lhasa; urban expansion; determinants; plateau city; policy framework Lhasa; urban expansion; determinants; plateau city; policy framework
►▼ Show Figures 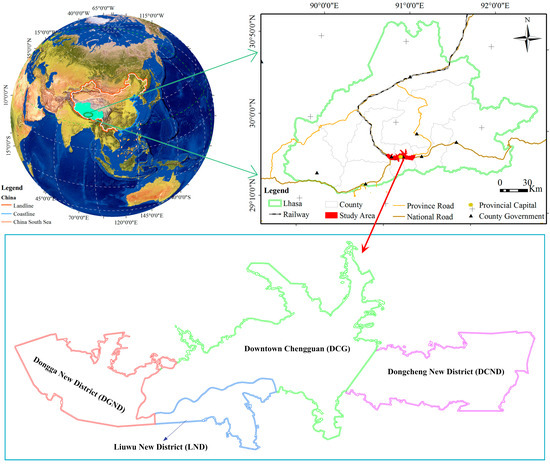