Mapping Urban Expansion and Exploring Its Driving Forces in the City of Praia, Cape Verde, from 1969 to 2015

Urban expansion is the outcome of intensive human activity within a certain natural environment and may cause ecological and environmental problems, especially on small islands where land is a scarce resource. Praia is the capital city of Cape Verde, located on such an island. Understanding urban expansion will provide good knowledge for urban planning and policy making in balancing urban economic development and natural resource protection. According to available data, the urban expansion in Praia between 1969 and 2015 is observed in four phases (1969–1993, 1993–2003, 2003–2010, and 2010–2015). In order to integrate various data sources, this study applies an available method to coordinate and calibrate map data with different scales and forms into a consistent dataset and then introduces some improvements in the delineation of urban areas. With this data, the driving forces in each phase are explored using regression analysis, by which the main urban expansion processes are presented. We found a decrease in annual growth rate (AGR) of urban expansion after the year 2003 and a parallel stabilization of urban utilization density (UD) and land consumption per capita (LCR). This study also indicates that population is not always the persistent driving factor for urban expansion and the majority of horizontal expansion has occurred in zones with less infrastructure. View Full-Text
Keywords: urban expansion; regression analysis; ordinary least squares; Praia; Cape Verde urban expansion; regression analysis; ordinary least squares; Praia; Cape Verde
►▼ Show Figures 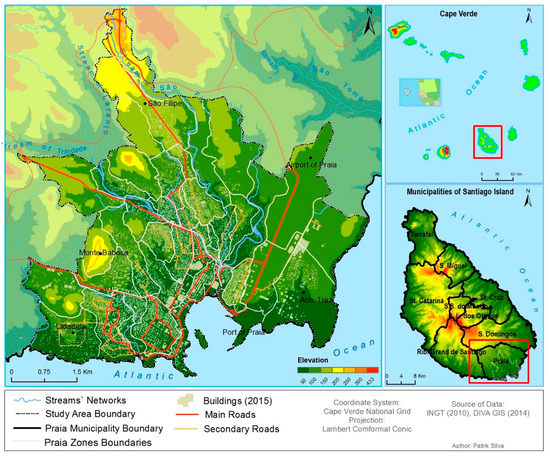