The Normative Dimension in Transdisciplinarity, Transition Management, and Transformation Sciences: New Roles of Science and Universities in Sustainable Transitioning
Next Article in Special Issue

Siting of Carsharing Stations Based on Spatial Multi-Criteria Evaluation: A Case Study of Shanghai EVCARD

Article
Are Crowdsourced Datasets Suitable for Specialized Routing Services? Case Study of OpenStreetMap for Routing of People with Limited Mobility
by

:
Nowadays, Volunteered Geographic Information (VGI) has increasingly gained attractiveness to both amateur users and professionals. Using data generated from the crowd has become a hot topic for several application domains including transportation. However, there are concerns regarding the quality of such datasets. As one of the most famous crowdsourced mapping platforms, we analyze the fitness for use of OpenStreetMap (OSM) database for routing and navigation of people with limited mobility. We assess the completeness of OSM data regarding sidewalk information. Relevant attributes for sidewalk information such as sidewalk width, incline, surface texture, etc. are considered, and through both extrinsic and intrinsic quality analysis methods, we present the results of fitness for use of OSM data for routing services of disabled persons. Based on empirical results, it is concluded that OSM data of relatively large spatial extents inside all studied cities could be an acceptable region of interest to test and evaluate wheelchair routing and navigation services, as long as other data quality parameters such as positional accuracy and logical consistency are checked and proved to be acceptable. We present an extended version of OSMatrix web service and explore how it is employed to perform spatial and temporal analysis of sidewalk data completeness in OSM. The tool is beneficial for piloting activities, whereas the pilot site planners can query OpenStreetMap and visualize the degree of sidewalk data availability in a certain region of interest. This would allow identifying the areas that data are mostly missing and plan for data collection events. Furthermore, empirical results of data completeness for several OSM data indicators and their potential relation to sidewalk data completeness are presented and discussed. Finally, the article ends with an outlook for future research study in this area.
Keywords:
sidewalk; routing; open data; OpenStreetMap; data quality; completeness

Several research projects with sustainable applications varying from routing and navigation systems [1,2,3,4,5,6], traffic and transportation [7] to energy modeling [8] as well as population estimation [9] have used OpenStreetMap (OSM) as their primary data source because of being up-to-date, containing more detailed information compared to official datasets (in densely populated areas), and being open and free to use. Since the launch of OSM project in 2004 [10], the quality of its data has always been a concern for both research and industrial communities [11]. The reason behind this concern might be that data are collected by volunteers who are not necessarily familiar with data collection procedures and the fact that volunteers have different levels of competency.
Numerous research studies (see Section 2) have explicitly stated the importance and value of OSM data quality evaluation in their projects. Hence, it is crucial to evaluate the quality of dataset to see if it fits the purpose of use. Several research studies have been conducted to understand and evaluate the quality of OSM data based on different data quality elements and for different application purposes [12,13,14,15,16,17,18]. Some studies have only focused on assessing the completeness (as one of the geo-data quality elements) of OSM regarding certain objects of interests such as road street network [19,20,21,22], building footprints [23], bicycle trails [24], as well as land use information [25].
Quality of routing and navigation systems relies heavily on the quality and availability of input datasets. Nowadays, there are several data solutions available for routing and navigation systems, which OpenStreetMap data is one of the most up-to-date (in densely populated areas) and free to use. However, specialized routing and navigation systems such as systems for people with limited mobility need special consideration in terms of fitness for use of the data for their requirements. Existing commercial or governmental geo-data sources are not suitable for this issue due to lack of detailed attribute information about features such as sidewalks, surface condition, as well as height and slope information as well as the fact that oftentimes reference datasets are limited in terms of covered area and they are not up-to-date [26]. In recent years, the research community has experienced a strong increase in studies related to routing applications tailored to people with disabilities in which the lack of a sophisticated dataset played a major role [3].
Within the CAP4Access European project [27], we aim to use OpenStreetMap data for routing and navigation of people with limited mobility. Research that focuses on routing specifications for disabled people, such as wheelchair users, blind, deaf or elderly people, has experienced a strong increase in recent years [28,29,30], where some of them use crowdsourced geographic information as their data source [29,30,31,32,33]. An important issue that needs to be considered for such studies is that geo-data requirements may vary significantly depending on the project’s purpose. Routing applications for pedestrians have different geo-data requirements than motorized traffic and vice versa [34]. Therefore, research on the quality of OSM data with respect to wheelchair routing requirements in particular seems necessary. To the best of our knowledge, there is no study done on assessing the completeness and fitness for use of OpenStreetMap dataset for wheelchair routing services. Studies that have used OSM data for this purpose assumed that the dataset is good enough to be used. In order to properly assess the fitness for use of OSM in this regard, there is a need of understanding the data requirements of such a routing service and checking to see whether OSM database fulfills those requirements or not.
Several studies have highlighted the data requirements for a potential routing and navigation system for wheelchair users [31,35]. Oftentimes the system and its corresponding data are created through surveys. As a reference in this study, the specification by the German Institute for Standardization provides a foundation for this particular type of information. DIN 18024-1 [36] describes the accessibility requirements for disabled people. The standard includes recommendations for different handicap types, which also help to define the target user group for which our study is conducted: Wheelchair users [36]. Based on the specification, some of the recommended parameters that need to be implemented in the final dataset can be surface information, incline and width of the sidewalk segment. However, based on a number of other studies [29,37,38,39], additional parameters for a disabled friendly routing network have been determined which would are later introduced in Section 3.
The main hypothesis behind this research is that patterns between geo-data implemented in such widely used applications and the geo-data requirements for applications tailored to disabled people need to be evaluated. Therefore, in order to evaluate the fitness of use of OSM data for this project, this study investigates the suitability and quality of OpenStreetMap data regarding the specific attributes that are relevant to wheelchair routing services. For this, we study the completeness of OpenStreetMap sidewalk data in Germany for three levels of completeness: objects, attributes and values. The results show the statistics of data inconsistencies in OpenStreetMap dataset for several German cities for wheelchair routing application.
The remainder of the paper is structured as follows. In the next section, we introduce the methodology for evaluating the completeness of OSM regarding sidewalk information in two stages: extrinsic and intrinsic. Section 3 presents the results of applying the methods for selected use cases with detailed discussion on the results. Finally, in Section 4, we conclude and point out some ideas for future work on this topic.

In our study, we perform both extrinsic and intrinsic analysis in order to acquire a solid understanding of sidewalk completeness in OSM. However, the extrinsic quality analysis approach would only be carried out for Heidelberg, Germany since we have access to the sidewalk reference dataset of this city. In the case of intrinsic quality analysis, we have selected more cities so that our results could be more generalized to country level. The selected cities for intrinsic analysis include the capital of Germany (Berlin); two large and densely populated cities, Munich and Hamburg; and two smaller cities, Heidelberg and Freiburg. The selections of cities are based on being both large and smaller cities with different population density. In addition, Freiburg is selected specifically because previous projects and efforts have been completed regarding definition and collection of sidewalk information in OSM for this city. Therefore, we would like to see in our future statistic results whether this issue impacts the completeness of data for such city compared to others and to what level.

As the first step for checking the completeness of sidewalk information in OSM, we must have an estimation of total number of sidewalk features in the selected regions. Therefore, an extrinsic quality analysis has been done by means of checking the OSM road features that have sidewalk tag, compared to a reference dataset of sidewalks in the city of Heidelberg. For this issue, we follow the methodology presented by Koukolestos et al. [20], and Ciepluch et al. [48], where the total length of linear features (in Kilometers) are considered as the index for comparison. Our approach for matching OSM road features with the sidewalk reference dataset is similar to the map matching approach presented by Fan et al. [59]. Figure 1 shows the flowchart of the tasks that were carried out for the extrinsic quality analysis.
We have used OSM2PGSQL tool [60] in order to extract and transfer relevant data from OpenStreetMap into our database. The total linear features in OSM database that have a tag of sidewalk = yes assigned to them are filtered and considered as sidewalk features available in OSM data. As depicted in Figure 1, urban block as the smallest area surrounded by roads could be derived from road network data through three steps: (1) splitting road line segments into small line segments where they intersect with other roads; (2) forming polygons as areas enclosed by the line segments; and (3) extracting urban blocks from these polygons (considering different classes). For more information regarding preprocessing and extraction of urban blocks from road networks, refer to Fan et al. [59]. After extracting the relevant features and preprocessing the data according to Figure 1, the overlapping and non-overlapping features of the resulting OSM dataset with the adjusted sidewalk reference dataset were identified. Next, the total length of features was calculated and compared (Table 1).

Amin Mobasheri has received funding from the European Community's Seventh Framework Programme (FP7/2007-2013) under grant agreement No. 612096 (CAP4Access), as well as the European Union’s Horizon 2020 research and innovation programme under grant agreement No. 693514 (WeGovNow). We thank Alexander Zipf and the three anonymous reviewers for their valuable feedback. We also acknowledge the financial support of the Deutsche Forschungsgemeinschaft and Ruprecht-Karls-Universität Heidelberg within the funding programme Open Access Publishing. 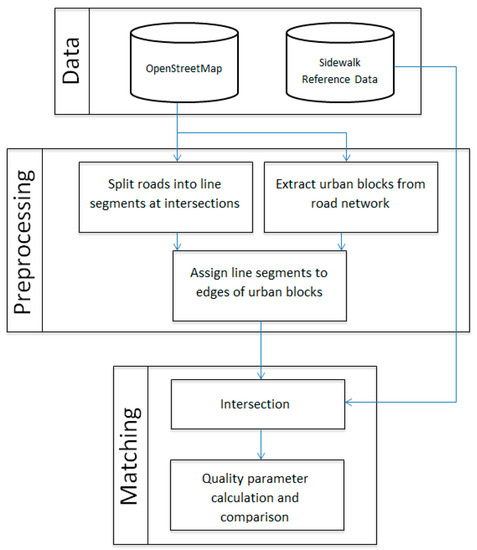 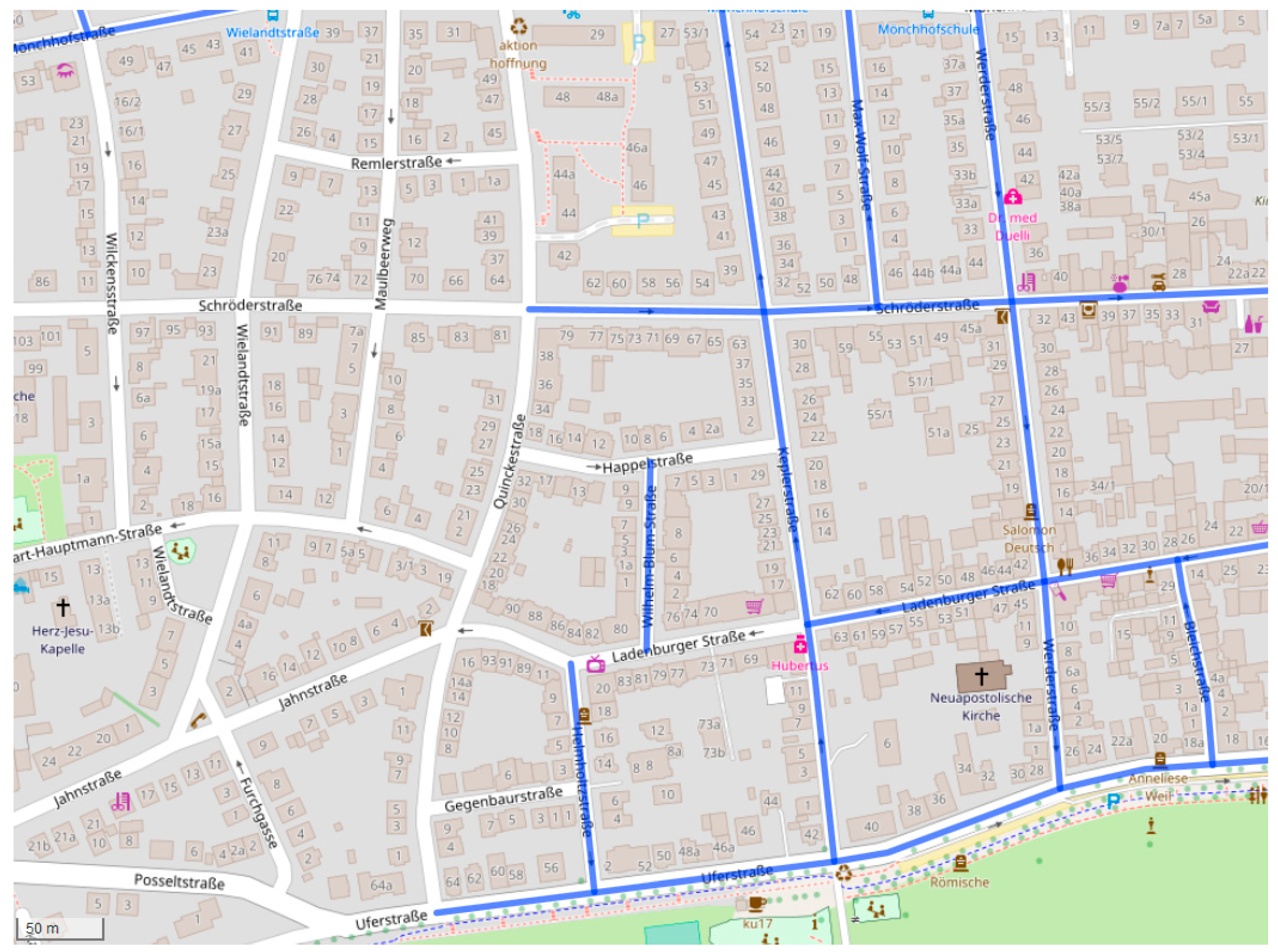 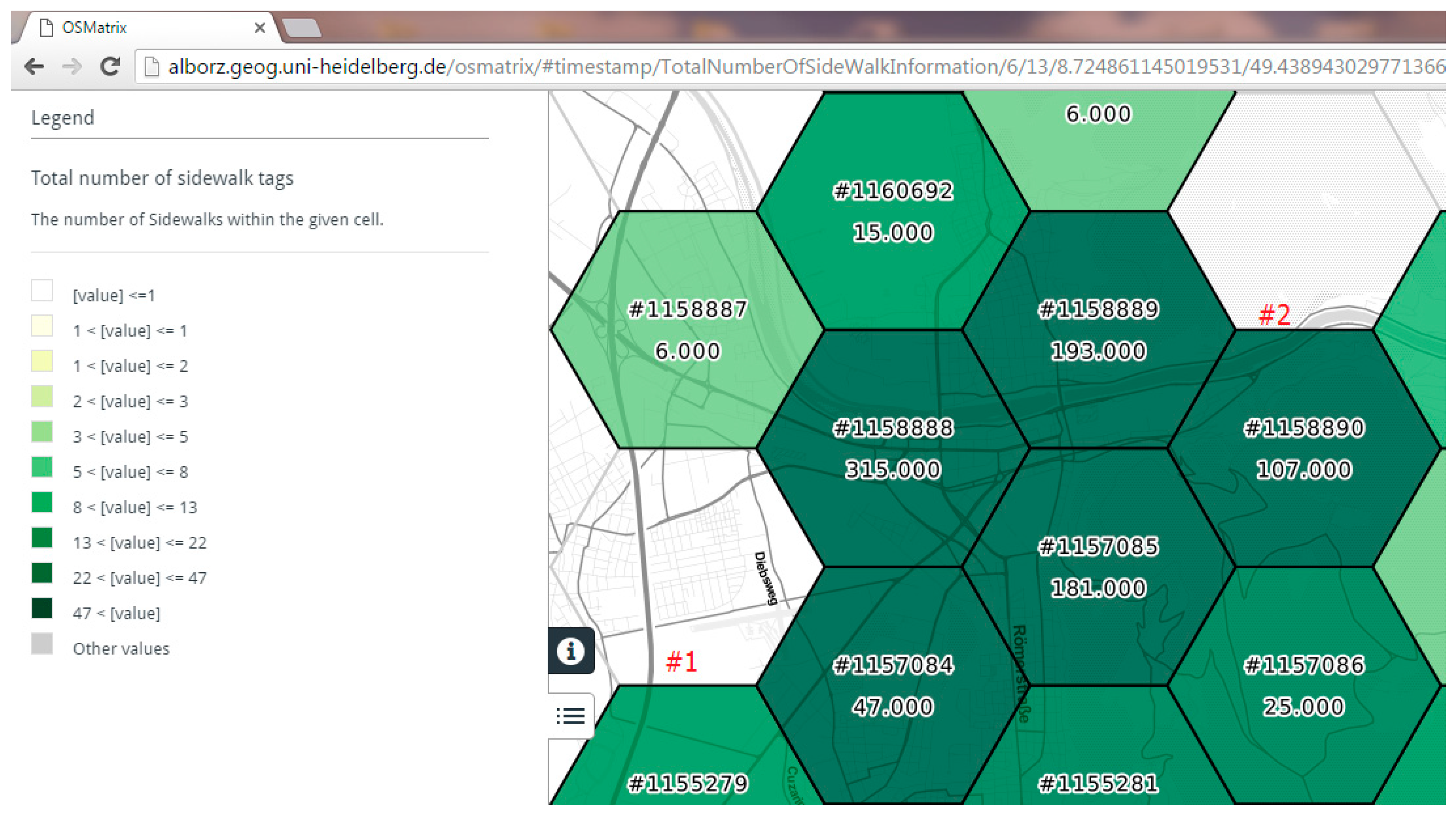 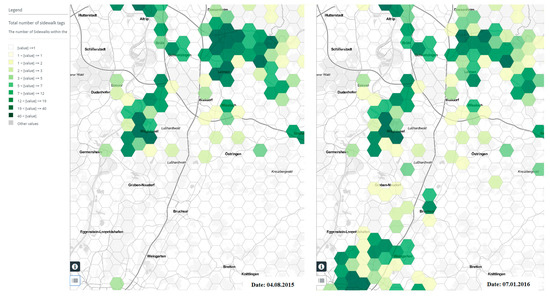 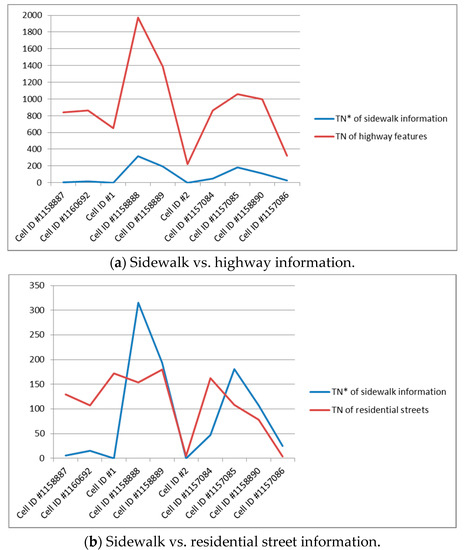