A Study of Walkable Spaces with Natural Elements for Urban Regeneration: A Focus on Cases in Seoul, South Korea
Next Article in Special Issue

Comment on Ryffel, G.U. I Have a Dream: Organic Movements Include Gene Manipulation to Improve Sustainable Farming. Sustainability 2017, 9, 392
Previous Article in Journal

A Fuzzy Logic-Based Tool for the Assessment of Corporate Sustainability: A Case Study in the Food Machinery Industry
Previous Article in Special Issue

I Have a Dream: Organic Movements Include Gene Manipulation to Improve Sustainable Farming

A World without Hunger: Organic or GM Crops?

It has been estimated that the world population will increase to 9.2 billion by 2050; supplying the growing population with food will require a significant increase in agricultural production. A number of agricultural and ecological scientists believe that a large-scale shift to organic farming (OF) would not only increase the world’s food supply, but might be the only way to eradicate hunger sustainably. Nevertheless, OF has recently come under new scrutiny, not just from critics who fear that a large-scale shift in this direction would cause billions to starve but also from farmers and development agencies who question whether such a shift could improve food security. Meanwhile, the use of genetically modified (GM) crops is growing around the world, leading to possible opportunities to combat food insecurity and hunger. However, the development of GM crops has been a matter of considerable interest and worldwide public controversy. So far, no one has comprehensively analyzed whether a widespread shift to OF or GM would be the sole solution for both food security and safety. Using a literature review from databases of peer-reviewed scientific publications, books, and official publications, this study aims to address this issue. Results indicate that OF and GM, to different extents, are able to ensure food security and safety. In developed countries, given that there are relatively few farmers and that their productivity, even without GMOs, is relatively high, OF could be more a viable option. However, OF is significantly less efficient in land-use terms and may lead to more land being used for agriculture due to its lower yield. In developing countries, where many small-scale farmers have low agricultural productivity and limited access to agricultural technologies and information, an approach with both GM and OF might be a more realistic approach to ensure food security and safety. View Full-Text
Keywords: agricultural sustainability; co-existence; small-scale farmers; food security; food safety agricultural sustainability; co-existence; small-scale farmers; food security; food safety
►▼ Show Figures 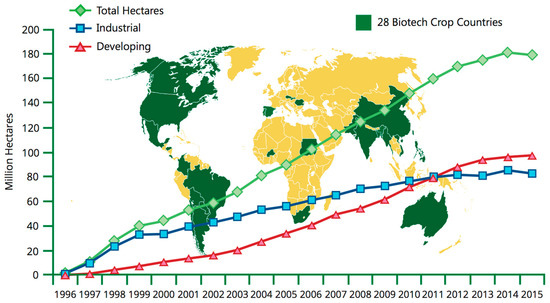