Slum Regeneration and Sustainability: Applying the Extended Metabolism Model and the SDGs
Next Article in Special Issue

The New Pyramid of Needs for the Digital Citizen: A Transition towards Smart Human Cities

Micro-Study of the Evolution of Rural Settlement Patterns and Their Spatial Association with Water and Land Resources: A Case Study of Shandan County, China

2. Overview of the Research Area

Shandan County is located in the middle of the Hexi Corridor and is the eastern “gate” of Zhangye City in Gansu Province of China. Shandan County is often known as “the wasp-waist of corridor” and “the throat of Ganliang”. In fact, the ancient “Silk Road” passes this area. Shandan County is bounded by Yongchang County in the east, Minle County in the west, Ganzhou District in the northwest, the Huangcheng District of Sunan Yugur Autonomous County in the southeast, the Lenglong mountain range of the Qilian Mountains and Qinghai Province in the south and Longshou Mountain in the north. The other side of Longshou Mountain is Alashan Right Banner in the Inner Mongolia Autonomous Region. Shandan County is a typical oasis. It has a total area of 5402.43 km2, a north-south length of 136 km and an east-west width of 89 km. It is in 100°41′–100°42′E and 37°56′–39°03′N (Figure 1). This area has an alpine semi-arid climate, with uneven distribution of seasons, strong solar radiation, long sunshine hours, low temperature, large temperature difference between day and night, little but concentrated rainfall, high evaporation, low humidity and short frost-free period. The mean annual temperature is about 6.5 °C, the mean annual precipitation is 199.4 mm, sunshine hour is 2964.7 h, evaporation is 2351.2 mm and the frost-free period is 165 d. Its altitude ranges from 1549 to 4444 m above the sea level. The highest point is in the Lenglong mountain range of Qilian Mountains. The lowest point is in Xitun Shahe of Dongle County. There are the Maying river, Huocheng river, Sigou river and Shandan river in Shandan County. In addition, there are many ditches such as Liushui Kou, Ciyao Kou, Nanshan Kou.

Shandan County has jurisdiction over 2 townships (Liqiao and Laojun), 6 towns (Qingquan, Chenhu, Huocheng, Weiqi, Dongle and Damaying), 110 villages, 6 committees and 754 villager groups. It had 167.3 thousand permanent residents in 2015, among which urban population was 71,000. Thus, the urbanization rate was 42.44%. There are 14 minorities living in Shandan County including Hui, Dongxiang, Tibetan, Manchu, Zhuang, Miao, Tu, Tujia, Yugur, Bonan, Mongolian, Yi, Daur and Xibe. These minorities have a population of 747, accounting for 0.39% of the total population in the county. The GDP of Shandan County was 4.3 billion Yuan in 2015 and the ratio of three sectors (primary, secondary and tertiary) was 22.5: 26.5: 51in 2015. Clearly, the primary and secondary industries accounted for small proportions. Considering the total economic output, the per capita disposable income of farmers (10,526.6 Yuan) and the per capita disposable income of urban residents (19,445.1 Yuan), the industrial structure of Shandan County is relatively advanced.

3.1.1. The Indices of Rural Settlement Pattern

The indices of rural settlement pattern, such as CA, NP, MPS, MINP, MAXP and PD were used to analyze the evolution and differentiation of rural settlements in Shandan County and reflect their structural composition and spatial characteristics. Among the indices mentioned before, MPS = CA/NP and PD = NP/Scounty area.

According to the nonparametric method for calculating surface density, the kernel density of rural settlements was determined. The higher the kernel density, the higher the distribution density of rural settlements. The formula was: where f(x,y) is the density estimate at (x,y), n is the number of observations, h is bandwidth (Mean Integrated Squared Error (MISE) is used in bandwidth estimation), k is Kernel function (Gaussian Kernel Function), di is the distance between position (x,y) and the ith observation point. where is standard deviation and x’ is the center of Kernel function [41].
The GIS-based Kernel Density Estimation (KDE) method used in this paper is based on a moving window to calculate and output the point density of each grid cell. The specific methods are: (1) Define a search radius, move the circle and count the number of events that fall within the circle; (2) Determine the size of the output grid according to the density precision requirements; (3) Calculate the density contribution value of each event to each grid in the circle through the kernel function; (4) Assign density value to each grid and its value is the sum of the density contribution value of each event in the grid; (5) Output the density value of each grid. By setting different search radius, a better density distribution effect was achieved in this paper [42].

Detection of a hotspot (or a coldspot) in spatial data and temporal-spatial data sets is very meaningful. Spatial hotspot detection (Getis-OrdGi*) was used to determine whether the number of rural settlement patches was significantly large or small (in statistics) in some regions. Then, the hotspots and coldspots were visualized for further study of the differentiation of rural settlement scale. The equation was: where wij(d) is spatial weight defined according to distance principle and xi and xj are variables in i and j zone, respectively. If Z(Gi*) is positive and statistically significant, the area will be a hotspot area, i.e., a large number of rural settlement patches accumulate in this area. If Z(Gi*) is negative and statistically significant, the area will be a cold spot area, i.e., rural settlement patches are sparsely dispersed in this area.

4.1. Temporal Change of Layout of Rural Settlements in Shandan County

4.1.1. Temporal Change of the Indices of Rural Settlement Pattern

4.1.2. Temporal Change of the Size of Rural Settlements

(1)
Shandan County entered a rapid developmental stage in 1998–2008, which was promoted by China’s rural development strategy and farmers’ own needs. During this period, the spatial structure of rural settlements changed greatly. After 2008, the rural development tended to be stable and the spatial structure of rural settlements did not change significantly.
(2)
Furthermore, the newly-formed settlements mainly include solo settlements and small settlements that are formed by several solo settlements close to each other. The area of such small settlement is smaller than 1 hm2. In addition, some large settlements could be divided into smaller ones. These lead to more solo and small settlements. In the past, the settlement area per household in Shandan County exceeded the standard value. Some farmers expanded the area of their settlements by building various buildings for production purpose. This promotes the formation of large settlements. Recently, because of the implementation of strategies such as New Countryside, Beautiful Countryside, New Rural Community, the area of household is restricted by government regulation and the buildings built temporarily for production or living purpose are demolished to optimize the layout of rural settlements and promote intensive land use.

4.2.1. Spatial Differentiation of the Kernel Density

4.2.2. Spatial Differentiation of Hotspots and Coldspots

4.3. Spatial Association between Rural Settlements and Water and Land Resources in Shandan County

4.3.2. Spatial Association between Rural Settlements and the Hydrographic Network

This work was supported by the National Natural Science Foundation of China (Grant No. 41661105).

Libang Ma and Xiaodong Guo designed the study and processed the data. Yaya Tian, Yongli Wang and Meimei Chen gave comments on the manuscript. All authors Contributed to the results, related discussions and manuscript writing. 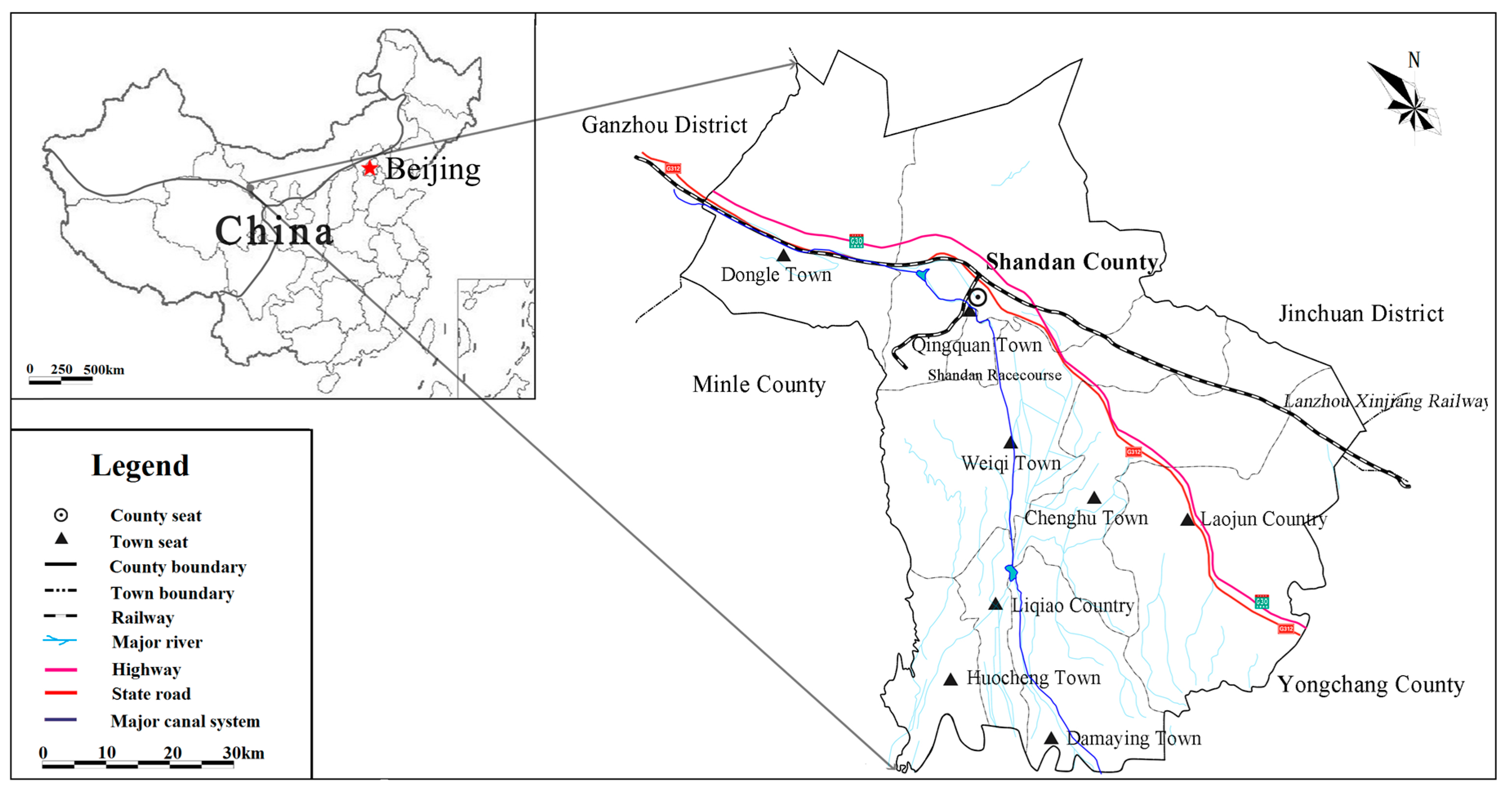