Are the Rural Electrification Efforts in the Ecuadorian Amazon Sustainable?

In each country in the world, there is a strong need for all industries to reduce CO2 emissions for sustainable development as a preparation for climatic change. The biggest issue in many developed countries, including the United States, is to reduce CO2 emissions for the upcoming implementation of Carbon Emissions Trading. The construction industry, in particular, which accounts for up about 30% of CO2 emissions, will need studies on the amount of CO2 emissions. The purpose of this study is to present the most environmentally friendly and economical apartment house plan types according to the increasing number of layers by evaluating the amount of CO2 emissions and economic efficiency. The results indicated that flat and Y-shaped types are more eco-friendly and economical in lower levels of less than 20 stories. However, the L-shaped type is more highly eco-friendly and economically efficient in higher levels of more than 20 stories. The results of this paper would help to make a decision on the building types and the number of stories in the early stages of construction.
Keywords: apartment house; type of housing; CO2 emission; cost apartment house; type of housing; CO2 emission; cost

Oha et al. [11] proposed an optimum design model to analyze the relationship. A concrete-filled steel tube (CFT) column is one of the composite columns frequently used in building construction because of its structural performance, economic feasibility, and good space utilization; it has a high potential to reduce CO2 emissions because, due to the combining of two heterogeneous materials, the relationship among CO2 emissions, cost, and structural parameters in the green construction of buildings with CFT columns was not yet carried out. Boqiang et al. [12] provided an assessment of the potential of CO2 mitigation in buildings by conducting empirical research on the determinants of building energy-related CO2 emissions.
To build a calculation model for CO2 emissions in the materialization stage of office buildings, Zhixing et al. [13] considered the CO2 emissions generated from the production and transportation of construction materials and equipment, as well as the CO2 emissions generated from the construction process. Guomin et al. [14] developed a model to estimate and compare emissions at foundation construction and demonstrate its application using two case studies. Foundation construction involves heavy machine usage which contributes to greenhouse gas (GHG) and non-GHG emissions. Chau et al. [15] applied the Monte Carlo method to generate probabilistic distributions for describing the CO2 footprint of the superstructure of a high-rise concrete office building. The distribution profile was constructed with the material use data collected from 13 high-rise office concrete buildings in Hong Kong. Jingke et al. [16] analyzed GHG emissions during the construction phase of a case study building on the basis of an extended system boundary in the context of China by utilizing detailed onsite process data.

One hundred architectural drawings and floor plans used in actual developments by companies in Korea were analyzed and categorized into flat, tower Y, and tower L types, as listed in Figure 1. For each type, two buildings were selected for 15, 20, 25, and 30 floors. As listed in Table 1, buildings with the same construction conditions were selected: an internal area of 84 m2, four households on a floor, three bays, and a floor height of 2.8 m.
The evaluation buildings were chosen from three locations, namely Seoul, Chungcheongnam-do, and Ulsan, to reduce the variations in building material amount due to land conditions [17,18].

4.2. Calculation and Variation Rates of Material Amounts in the Evaluation of Apartment Houses

The amount of CO2 emissions was evaluated with respect to the concretes, reinforcement bars, and forms inputted per type of apartment houses; the evaluation scope was established as a production phase (cradle to gate). For the CO2 emission factor of concrete, reinforcing bars and forms, the Korea Life Cycle Inventory DataBase (LCI DB) was applied [33,34,35,36].

6. Evaluation of Cost in Apartment Houses

The cost evaluation of apartment houses by type used information from the Korea Public Procurement Service and Korea Price Information (KPI) to establish the unit prices of the primary construction materials [37].
Table 15 lists the cost (US$) evaluation result and its rate of change for apartment houses.

This research was supported by a grant (Code 11-Technology Innovation-F04) from the Construction Technology Research Program (CTIP) funded by Ministry of Land, Infrastructure and Transport.

The paper was written, revised and developed by Hyoung Jae Jang. Tae Hyoung Kim conducted the experimental and analytical works. Chang U Chae designed and supervised the project. All authors contributed to the analysis and conclusion, and revised the paper. All authors read and approved the final manuscript. 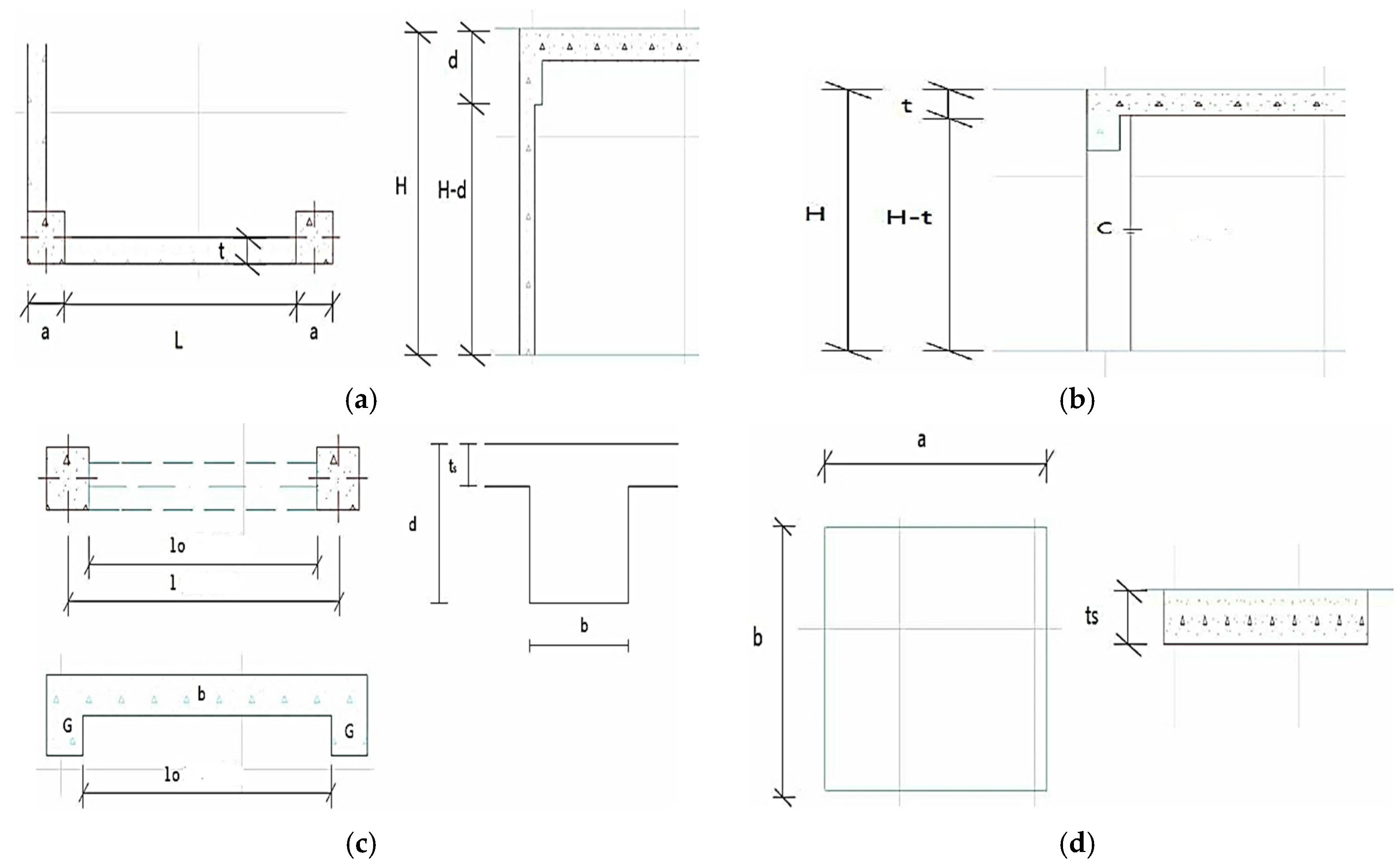 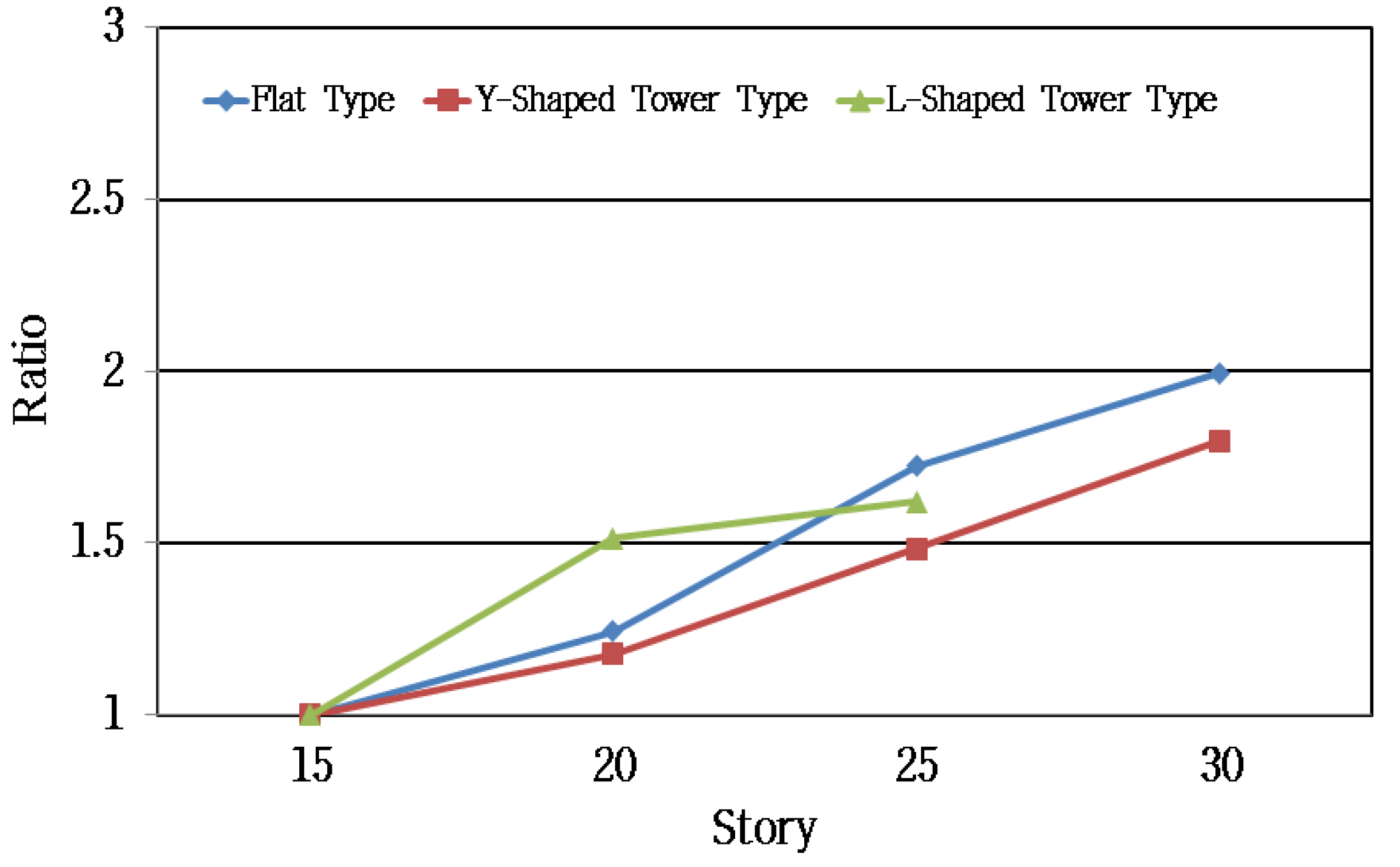 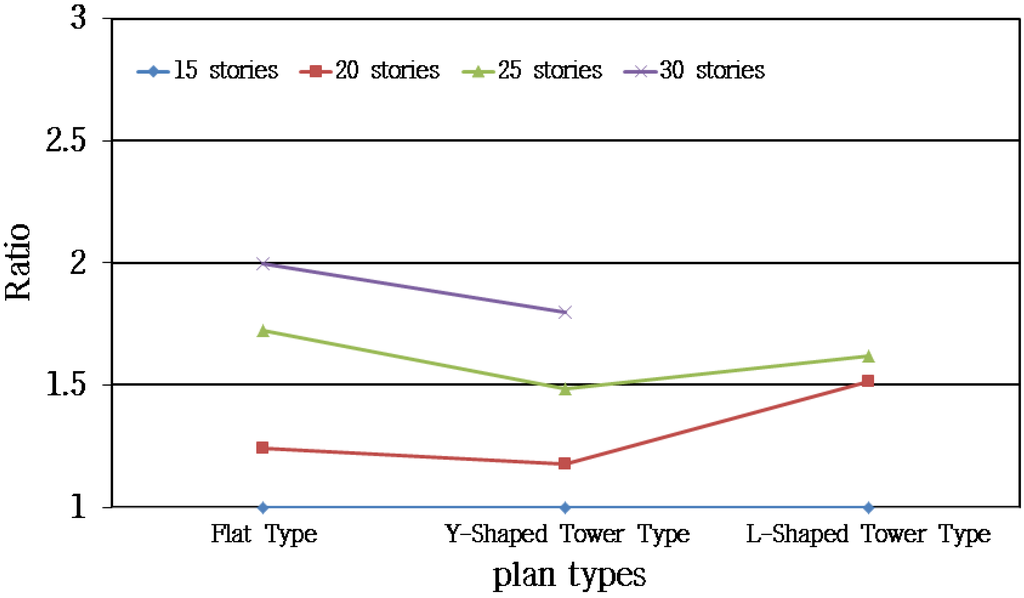 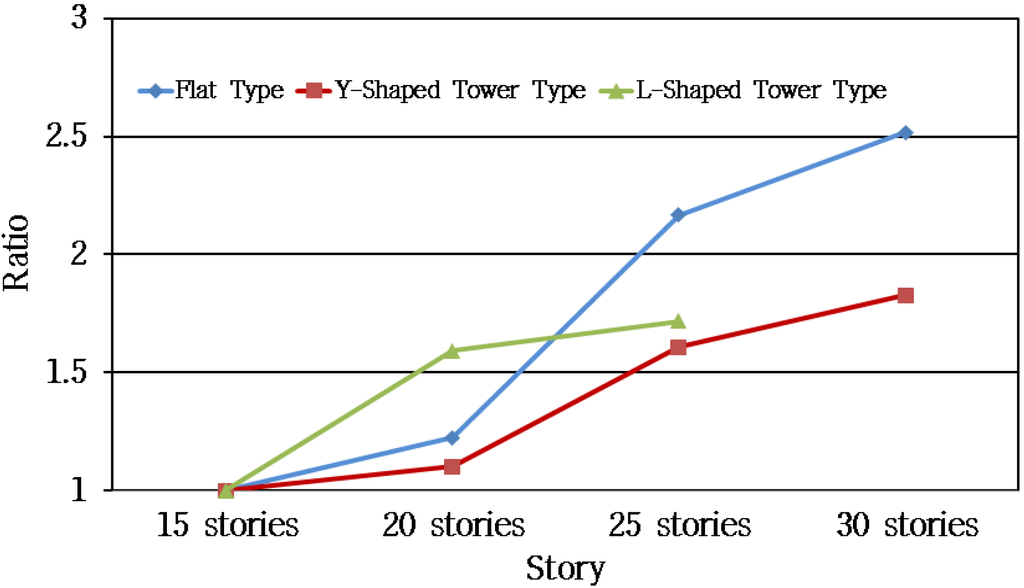 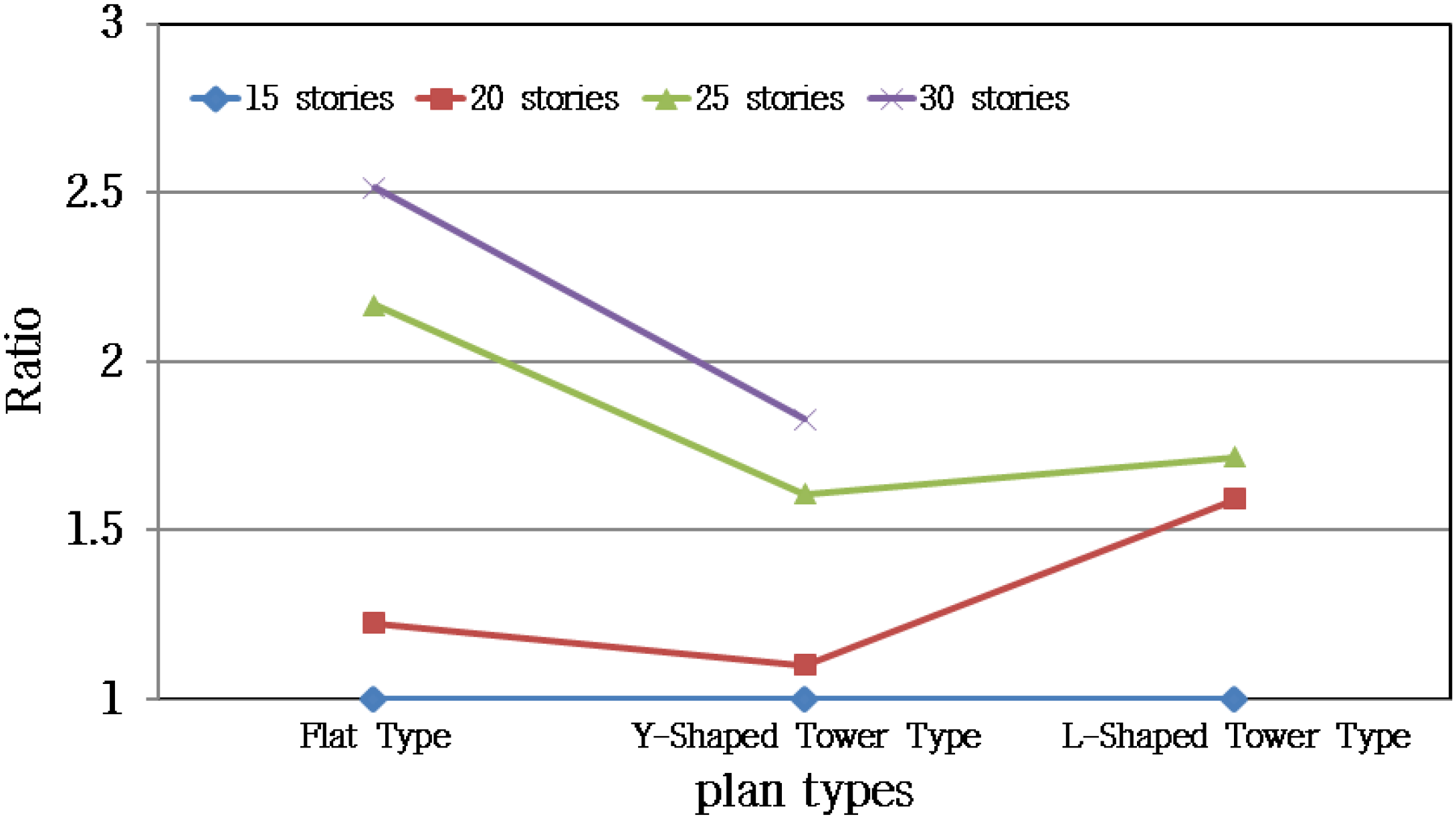 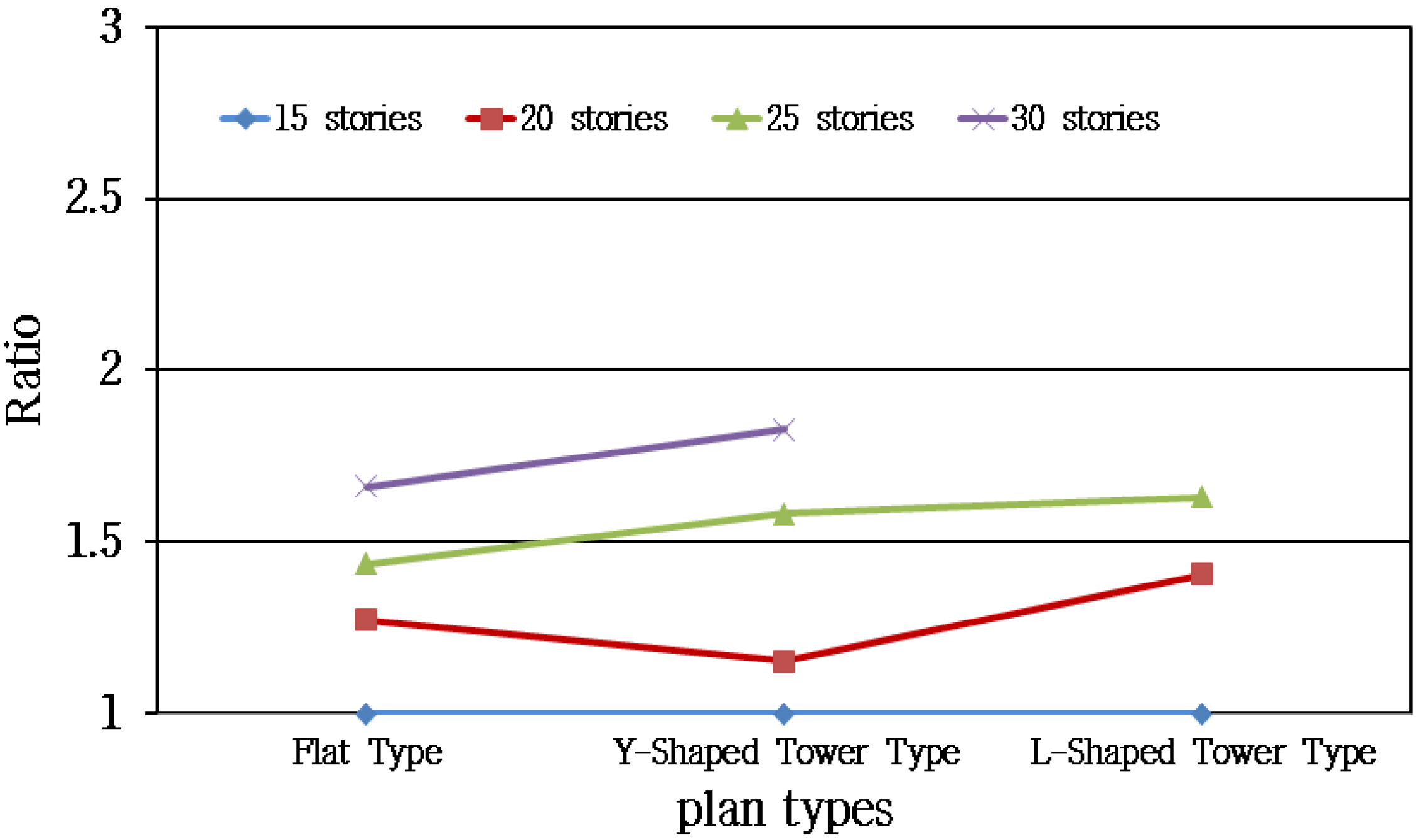 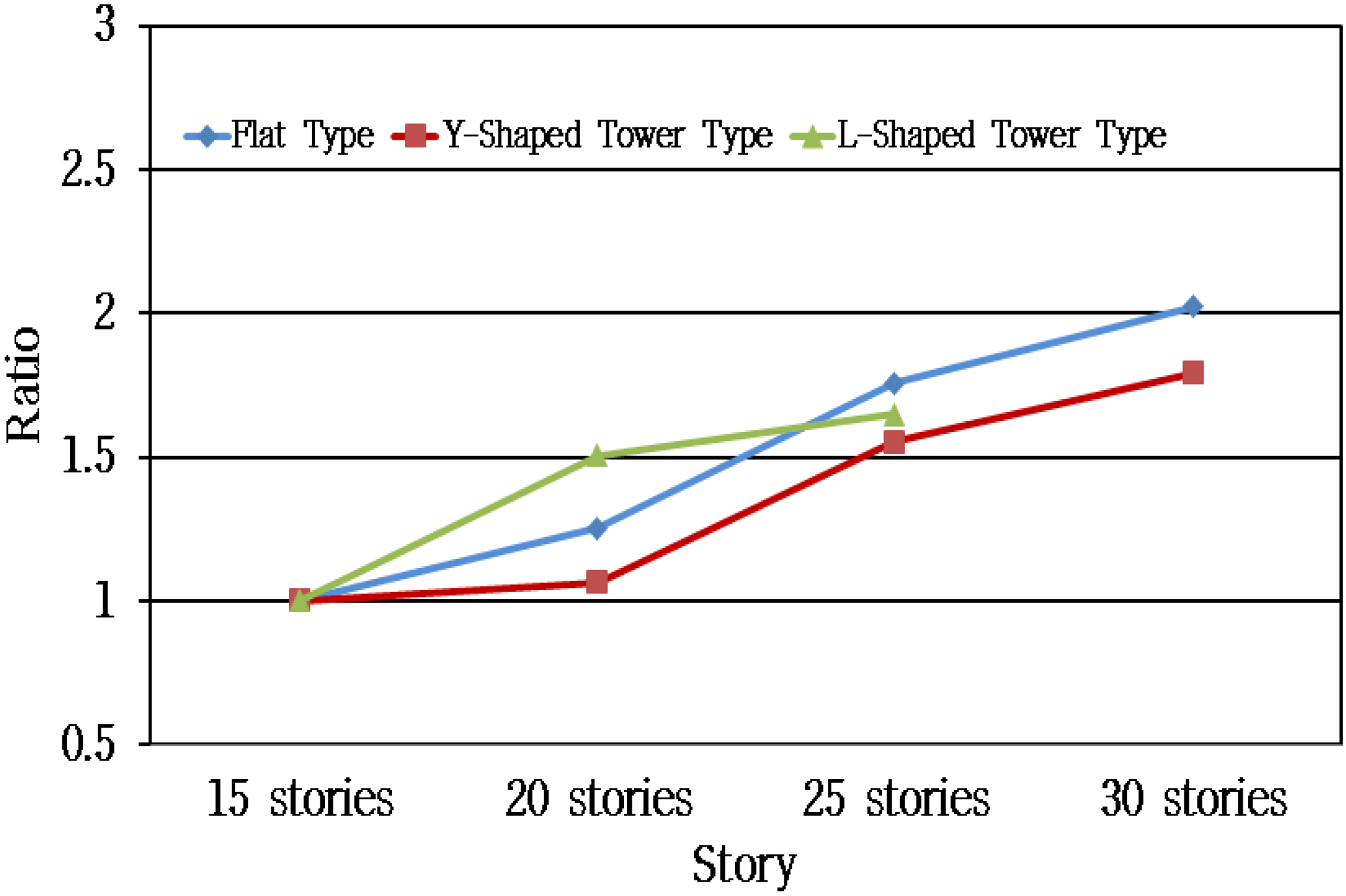 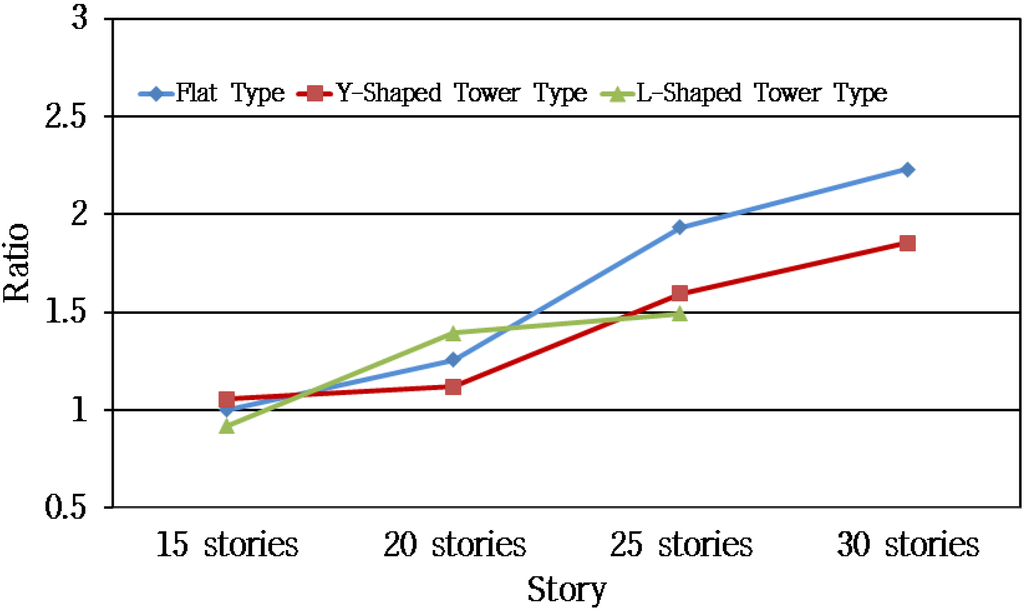 Table 2. Calculation formula for the wall.

Table 3. Calculation formula for the column.

Table 4. Calculation formula for the beam.

Table 5. Calculation formula for the slab.

Table 11. Calculated amount of concrete according to the number of floors and type.

Table 12. Result of calculated amounts of reinforcement bars according to number of floors and type.

Table 13. Result of calculated amounts of form according to the number of floors and types.

Table 14. Results of evaluation and rate of change for CO2 emissions per evaluation building.