Having benefited from rapid economic development for over 30 years, China finds itself coping with the relatively new phenomena of rapid urbanization [1]. The urbanization rate in China grew from 20% in 1980 to 46.7% in 2010, and the urban population increased by almost 350 million over the last 30 years [2]. To accommodate the rapidly-increasing population, the urbanized area has expanded to the outlying rural areas, which lengthens travel distance and encourages the desire to travel by car. The registered numbers of automobiles in China increased from 12.8 million in 1990 to 140 million in 2014 [3]. This rapid motorization led to serious traffic congestion and PM2.5 air pollution in China, especially in metropolises and some mid-sized cities. Figure 1 shows the traffic congestion and PM2.5 air pollution in Beijing. 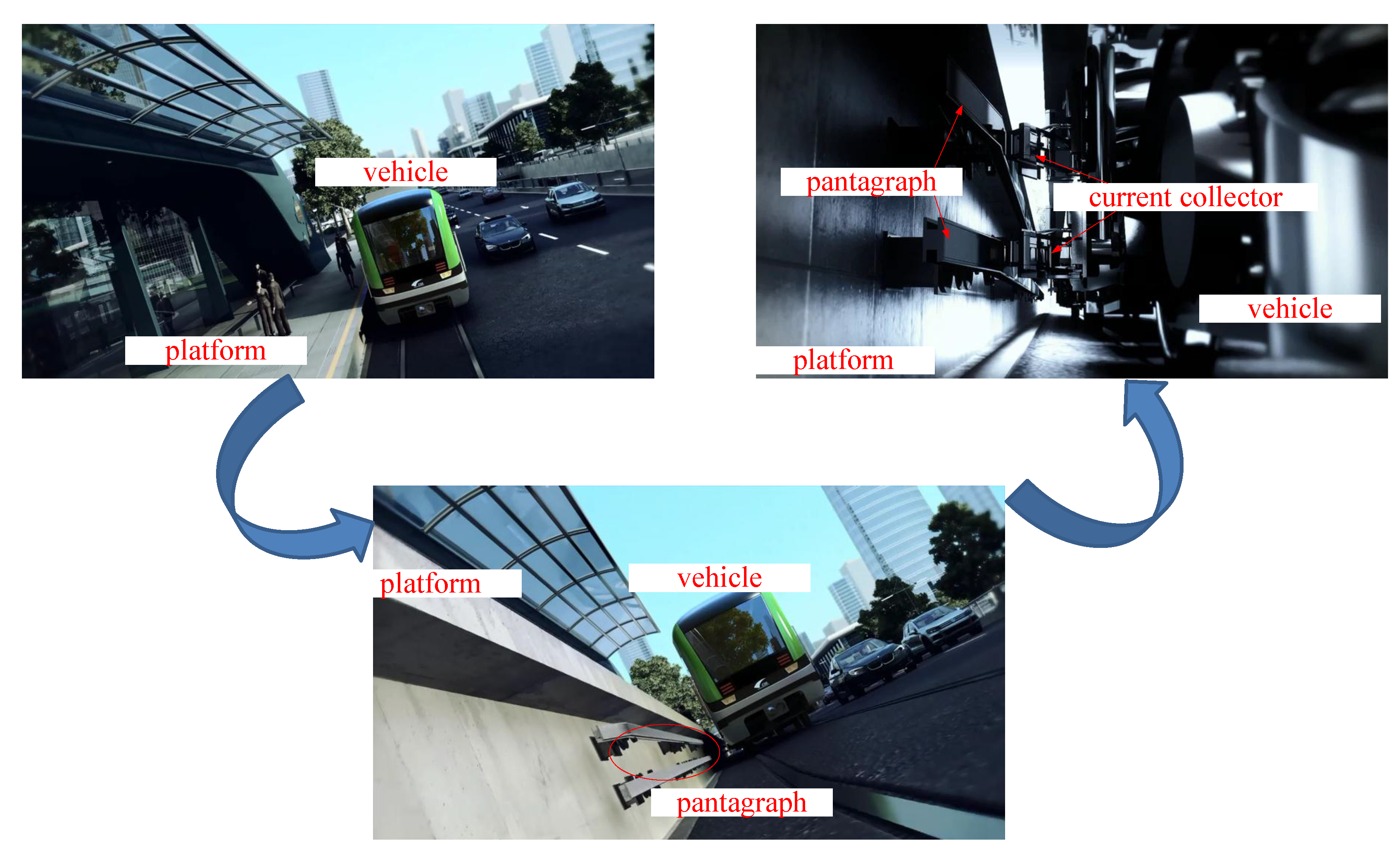 In most cases, the charging time for the onboard EDLC stacks is limited. For instance, the urban rail vehicle typically parks at the platform for only a few seconds for passenger boarding. The charging station should be designed to supply large enough output power to shorten the charging time. One common way to solve this problem is to connect chargers in parallel [22]. In fact, it has been shown that compared with a single “large charger”, the parallel connection of “small chargers” has many advantages, including high reliability, smaller ripples and higher system bandwidth [23]. However, parallel connection of chargers will typically lead to a current imbalance between chargers, which may lead to damage to the charging station. Therefore, current balancing is a basic requirement in the charging station design.
There are several current balancing methods that have been proposed in the literature, such as the droop control method [24,25,26] and the master-slave method [27,28]. In the droop control method, the current balancing is achieved by regulating the output impedance of each charger without any communications between them. A peculiar aspect of this method is that it only has a proportional controller for current and voltage, lacking any form of integral control. Control of a distributed system without communication can only be achieved at the price of permitting a certain error; thus the droop control method is rarely applied in large power applications. The basic idea of the master-slave method is to choose one charger as the master module and then to design controllers to ensure that all other chargers follow the reference current of the master. The connections between the master and the slave can either be a physical connection or wireless communication [27]. Since the master-slave method is a centralized current balancing method, the complexity of the algorithm will increase dramatically when the number of parallel chargers increases.
In this paper, we propose a simple, but efficient, current balancing method, namely the cooperative proportional-integral (PI) current balancing method. In the proposed method, there are 2n − 1 PI algorithms for n parallel chargers. The n local PI algorithms are responsible for achieving the output current target at the final state of each charger. The other n − 1 algorithms are called cooperative algorithms, which are responsible for the current balancing during the output current convergence between neighboring chargers. The proposed method is very easy in its hardware implementation, and we provide experiment results to illustrate the effectiveness of the proposed method.
The remainder of this paper is organized as follows. In Section 2, the schematic, control strategy and physical implementation of the stationary charging station are introduced. In Section 3, experimental results are provided to show the effectiveness of the design. We conclude the paper in Section 4.

The schematic of the stationary charging station is shown in Figure 3. The charging station is comprised of an embedded controller and two parallel chargers. The embedded controller monitors and regulates the output current of the two chargers. Each charger consists of a three-phase bridge rectifier Bi (i = 1, 2) and a buck converter. The three-phase bridge rectifier converts the input power from alternative to direct form. The buck converter consists of an insulated gate bipolar translator (IGBT) Ti, a free-wheeling diode Di, a filtering capacitor Ci and an inductor Li. The output current of charger i is denoted as Ii; then, the total output current of the charging system is denoted as Is = I1 + I2. 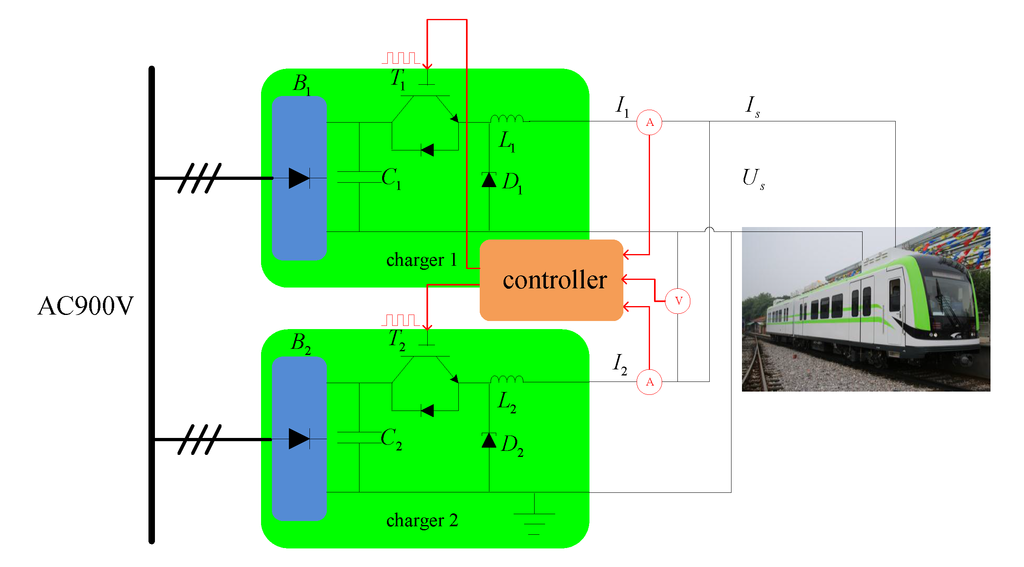 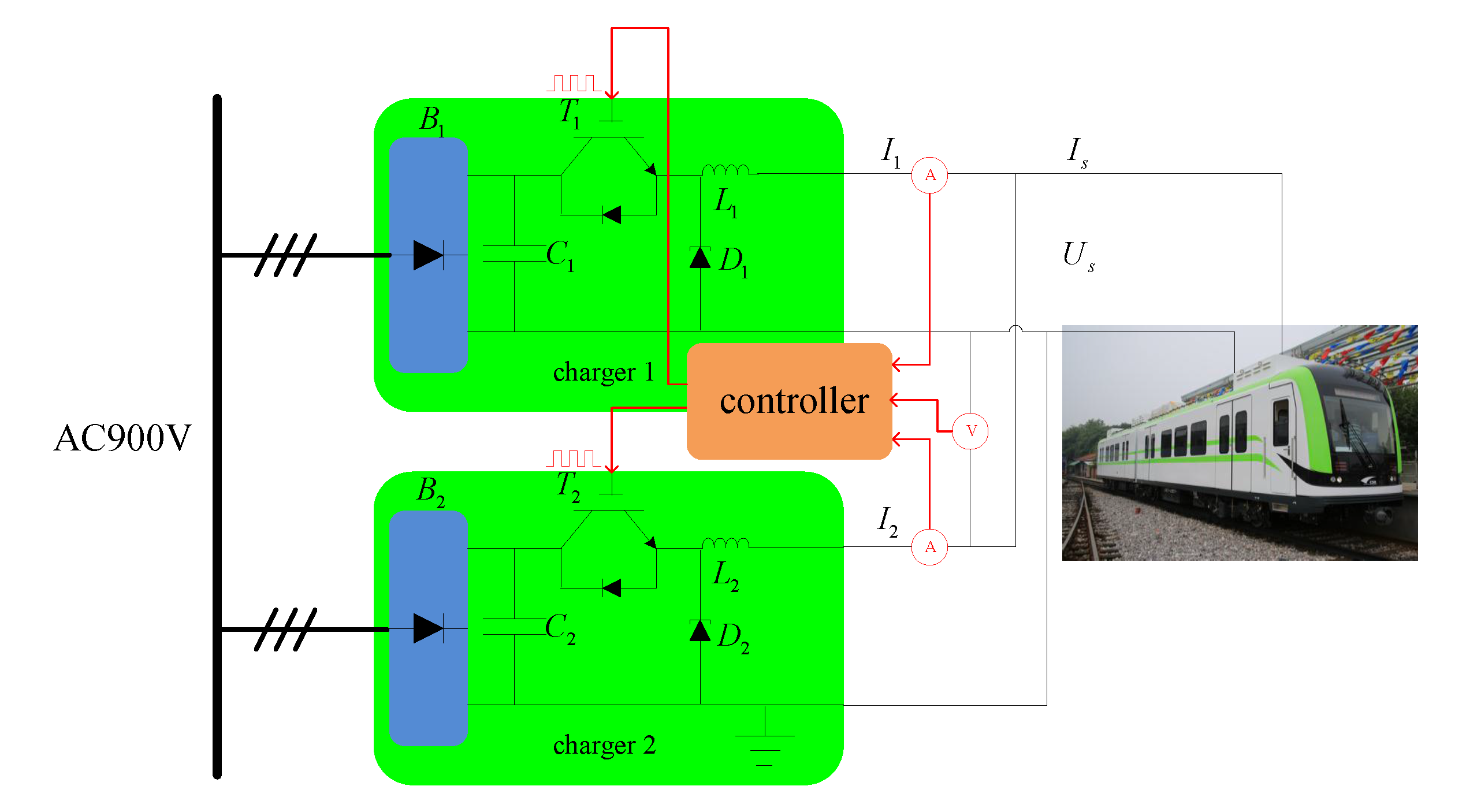 Denote Cs as the capacitance of the EDLC stack; then, we can derive the averaging model of the whole system. When IGBT Ti is on, the state equation of charger i is denoted as: where UBi is the output voltage of rectifier Bi, IBi is the output current of rectifier Bi and Us is the terminal voltage of the super-capacitor stack.
When IGBT Ti is off, the state equation of charger i is given by:
Then, the unified system dynamics of charger i can be represented by: where τi is the duty cycle of PWMsignals injected to IGBT Ti.
With the charging station model (2), a charging controller can be designed to regulate the output voltage and current of the charging station, and then handle the current imbalance between chargers. 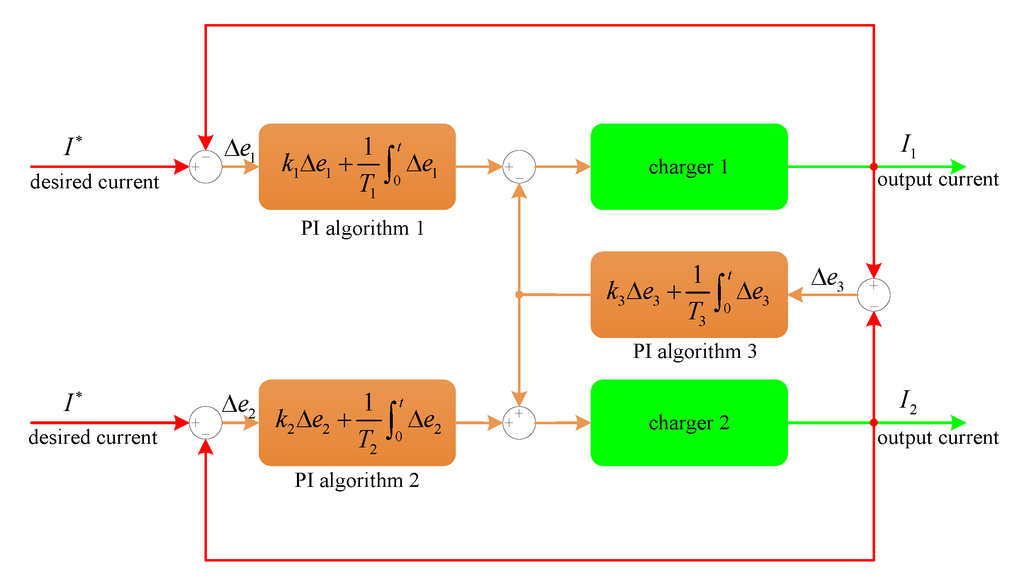 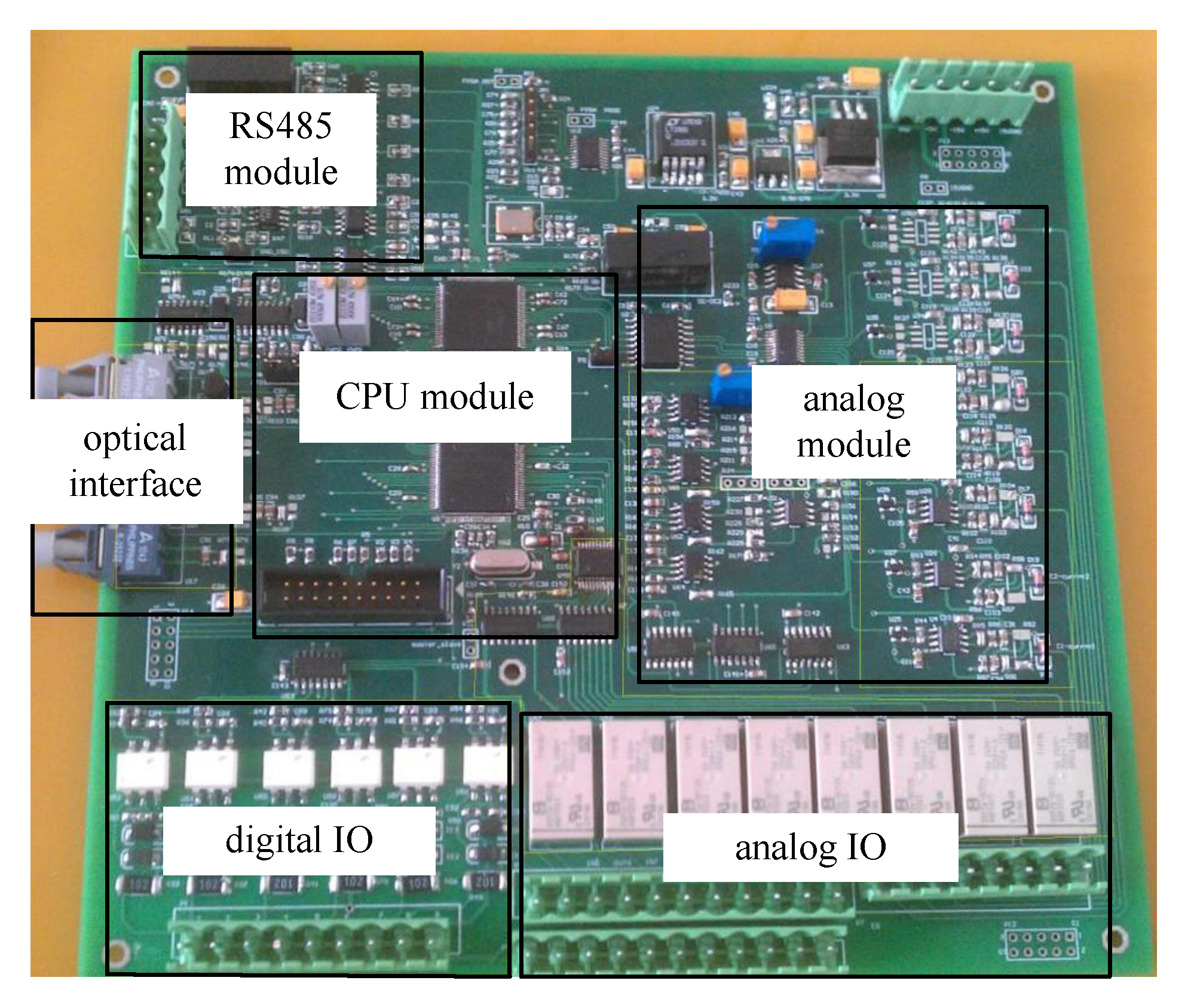 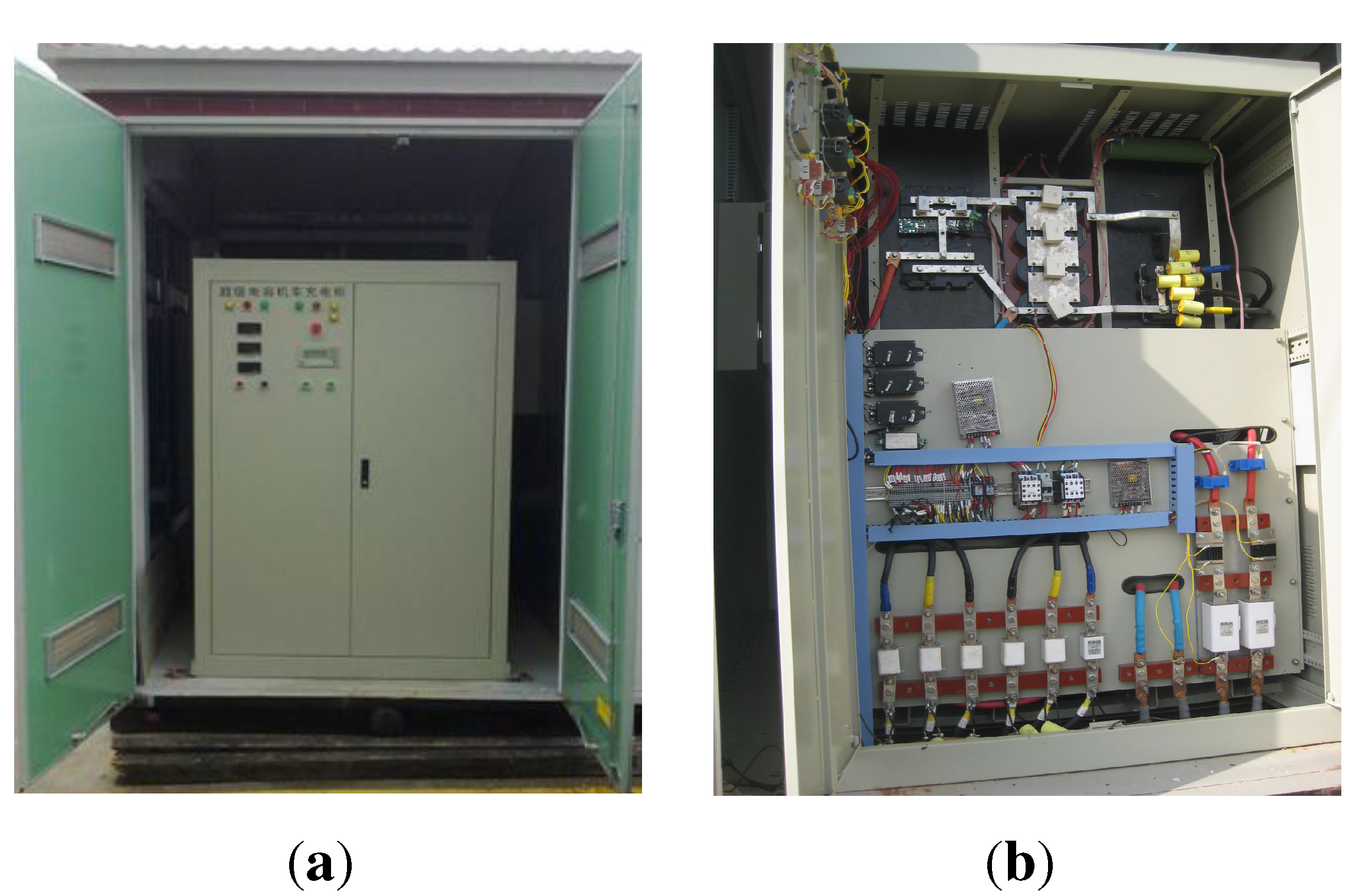 In this section, experimental results from the stationary charging station are presented to illustrate the effectiveness of the design. The charging performance metrics, including output current and voltage, current imbalance, and duty cycle of PWM waves, are transmitted from the RS485 module of the control board and plotted in Excel in the PC. The real-time waves, including PWM control signal and switching voltage of IGBT, are displayed in the oscilloscope.
The output current and voltage of the stationary charging station are shown in Figure 9. It is shown that the output current increases to 900 A within 3 s. Then, the urban rail vehicle is charged with a constant current of 900 A until the charging voltage increases to the desired voltage, 750 V. This means that the vehicle is fully charged. Then, the charging current decreases to zero rapidly, and the charging station can be disconnected from the urban rail vehicle. 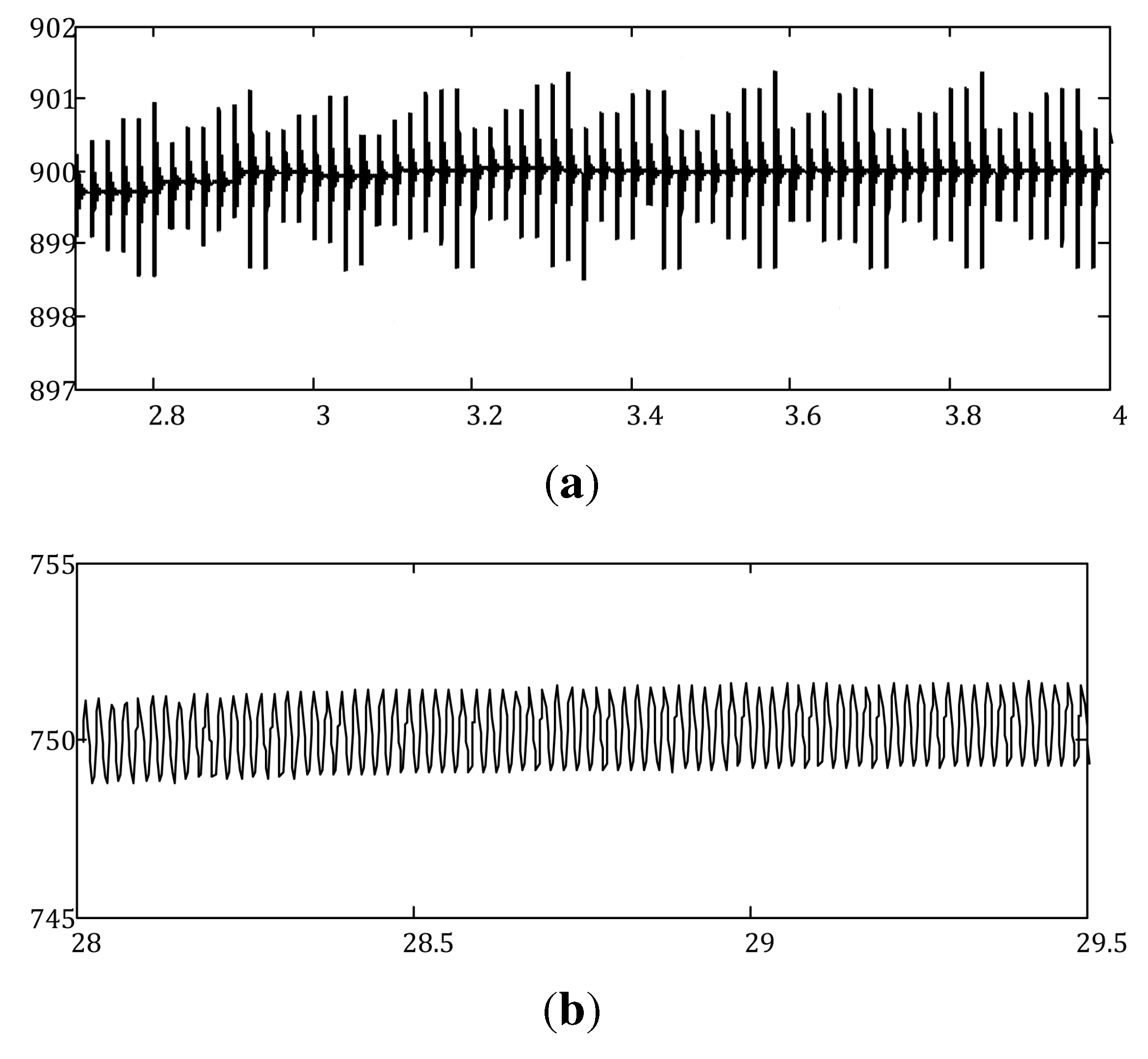 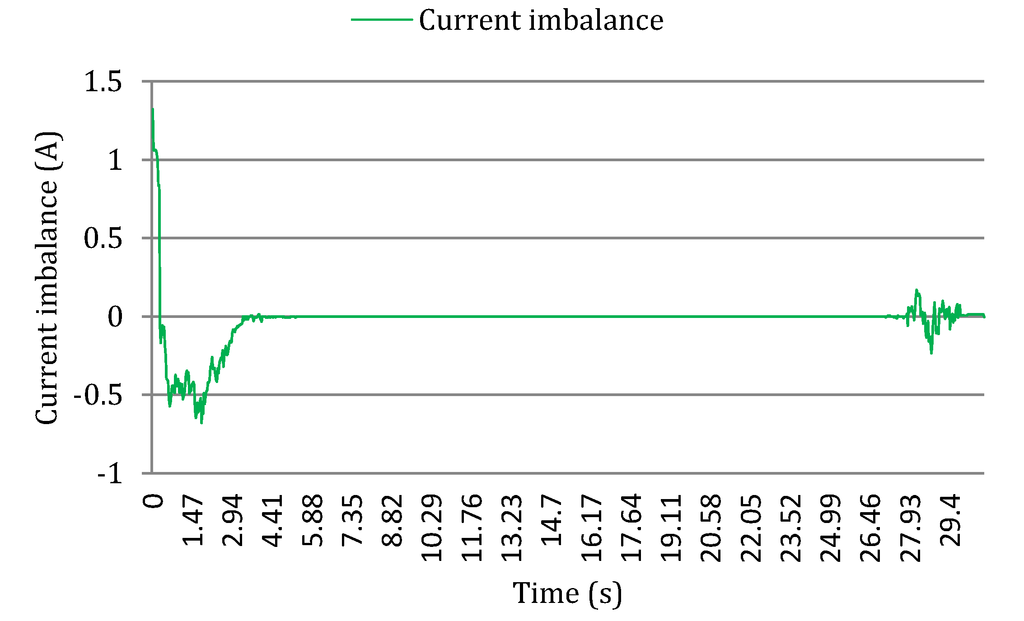 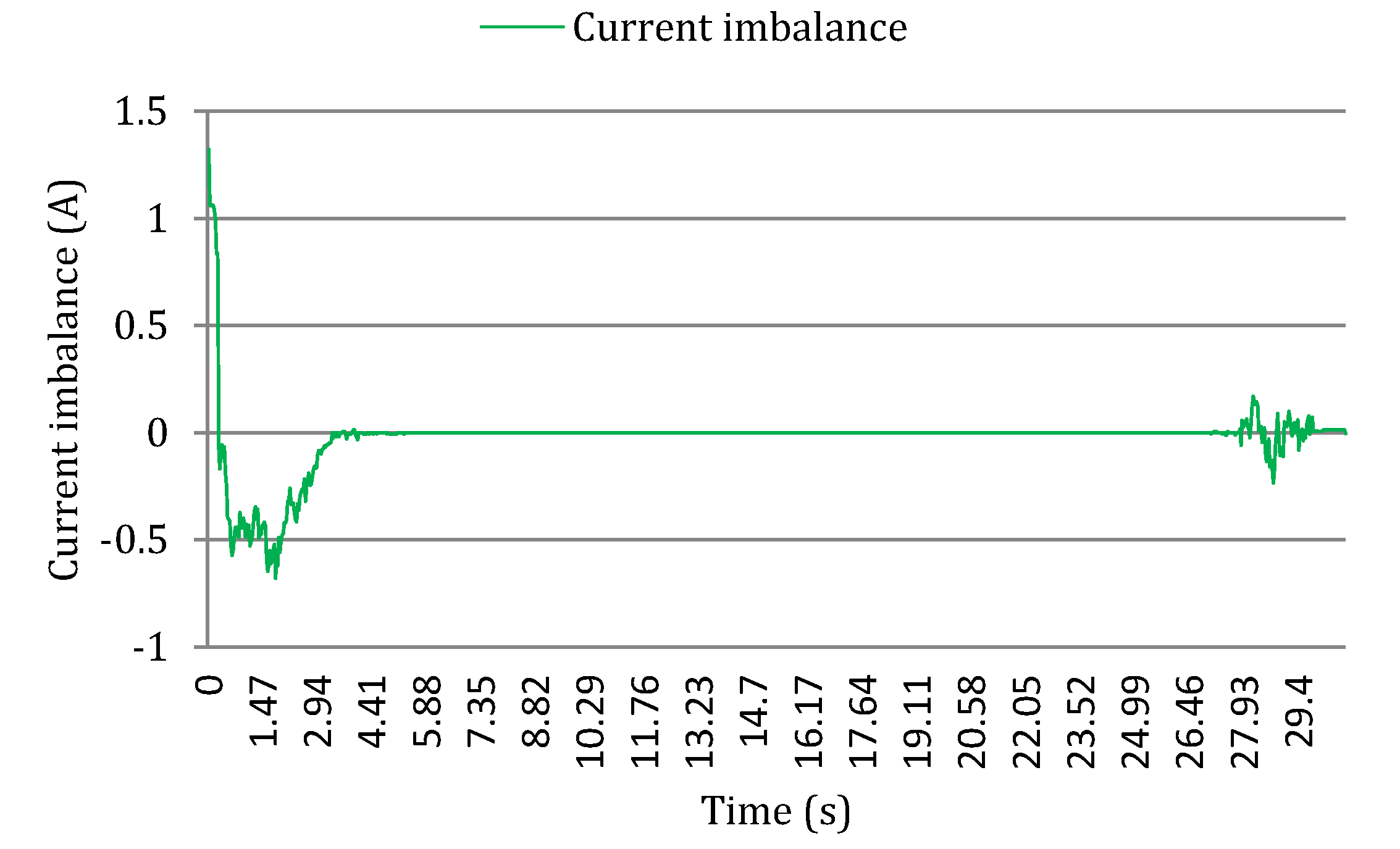 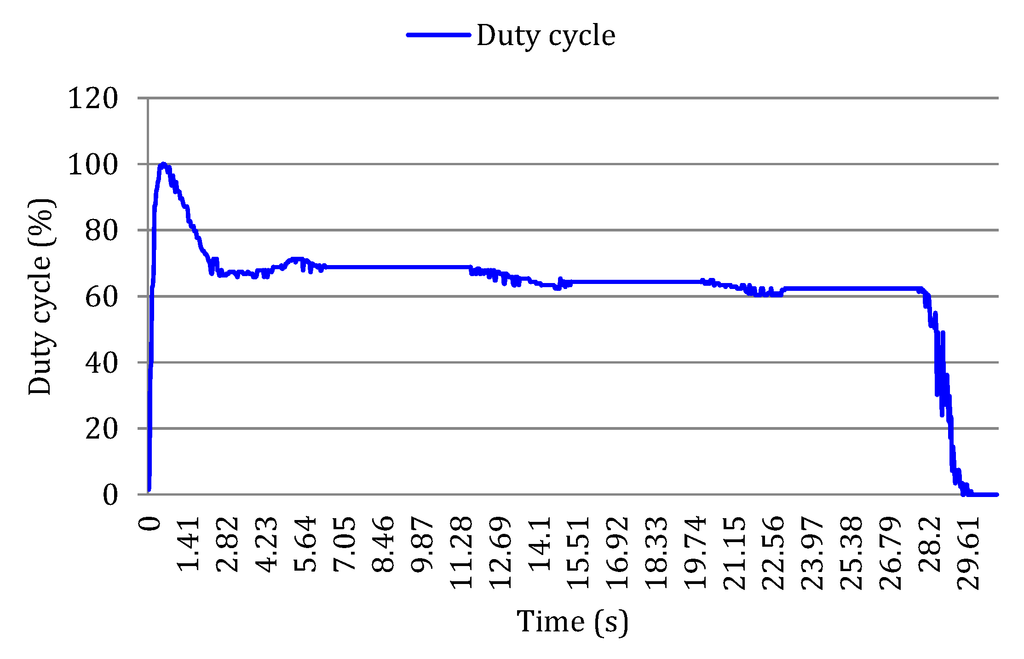 The authors would like to thank the anonymous reviewers for their constructive comments. This work is partially supported by the National Nature Science Foundation (Grant Nos. 61202342, 61379111, 61402538, 61403424) and the Hunan Provincial Innovation Foundation For Postgraduates.

The cooperative PI charging method was proposed by Jun Peng and Zhiwu Huang. The experiment results were collected and analyzed by Heng Li. The paper was written by Heng Li and Weirong Liu.