The Effects of Air Permeability, Background Ventilation and Lifestyle on Energy Performance, Indoor Air Quality and Risk of Condensation in Domestic Buildings
Previous Article in Journal

A Method for Proposing Valued-Adding Attributes in Customized Housing

:
The built environment contributes around half of total greenhouse gas emissions and with 87% of residential buildings that we will have by 2050 already built, it is vital to adopt sustainable retrofitting practices. The question is: what are the viable solutions? One answer may be green roof retrofitting. The environmental benefits include reduced operational carbon emissions, reduced urban heat island effect, increased bio-diversity, housing temperature attenuation and reduced stormwater run-off. The economic benefits are the reduced maintenance costs and lower running costs. The social gain is the creation of spaces where people have access to green areas. However, the barriers to retrofitting include the perceptions of structural adequacy, the risk of water damage, high installation and maintenance costs, as well as access and security issues. Many Australian and Brazilian residential buildings have metal sheet roofs, a lightweight material with poor thermal performance. During the summer, temperatures in Sydney and Rio de Janeiro reach 45 degrees Celsius, and in both cities, rainfall patterns are changing, with more intense downpours. Furthermore, many residential buildings are leased, and currently, tenants are restricted by the modifications that they can perform to reduce running costs and carbon emissions. This research reports on an experiment on two small-scale metal roofs in Sydney and Rio de Janeiro to assess the thermal performance of portable small-scale modules. The findings are that considerable variation in temperature was found in both countries, indicating that green roof retrofitting could lower the cooling energy demand considerably.
Keywords:
green roof retrofitting; Sydney; Rio de Janeiro; thermal performance; residential buildings; housing; case studies

The methodology adopted is predicated on the development of simple technologies to mitigate the problems created by increasing urban densification, which exacerbates urban heat islands and contributes to uncomfortably high internal housing temperatures. There are many technologies and approaches available to execute this research, but in this case, the researchers aimed to use adaptive techniques that minimised initial costs and maintenance costs; in other words technologies that would be affordable and easy to implement. For this reason, this project used lightweight removable modules of vegetation (rectangular containers) of a low thickness. This modular system enables planting, cultivation and maintenance off-site to be undertaken. This is an exploratory study to assess the thermal performance and feasibility of retrofitting with low-cost, lightweight roofing modules for metal sheet roofing.
The researchers sought to evaluate the performance of a green roof retrofit system, which could be widely used in metropolitan areas. At this point, there is an absence of empirical evidence on the performance of green roofs in Australia, with most data coming from the U.S. or Europe, where climatic conditions are very different [23]. Similar conditions exist for South America in terms of empirical data on green roof performance. Previous studies have shown significant variations based on temperatures, evaporation rates and wind conditions, which affect the performance of green roofs, but they have used longer life and more permanent technologies [23].
Two experiments were performed; one in Australia (Sydney) and one in Brazil (Rio de Janeiro). The Australian site is located on the roof of a building at the University of Technology, Sydney, in Ultimo, and the Brazilian location is on the roof of an existing building at the Oswaldo Cruz Foundation (Fiocruz).
Rio de Janeiro (S 23°; W 43°) has a tropical wet and dry or savannah climate with dry winters (Aw), and Sydney (S 33.9°; W 151.2°) has a humid subtropical climate (Cfa). The high and low annual average temperatures in Rio de Janeiro are 27.3 and 21 °C, respectively, whereas for Sydney, these temperatures are 21.7 and 13.9 °C. However, extreme higher temperatures are more commonly observed in Sydney (39.8–48.8 °C), rather than in Rio de Janeiro (37.7–39 °C) [2].
Succulent plants, such as variegated sedum, Echeveria glauca and Kalanchoe quicksilver, were selected on the basis of their higher drought resistance qualities and a lower risk of fire. Furthermore, these species can develop easily in shallow soils, and therefore, importantly, structural reinforcement of existing roofs is unnecessary. Additionally, due to the modular characteristics of the planting containers, the modules can be applied directly onto the roof covering, be it profiled metal sheeting or tiles.
Rectangular plastic containers were selected according to the availability at the different sites (Rio de Janeiro, 400 mm × 500 mm, and Sydney, 190 mm × 330 mm) where the experiments were performed, as shown in Figure 1.

Both containers have a water storage system, which meets two main objectives. Firstly, it provides water to the soil through evaporation, enhancing the plants survival, even during extended periods of no rainfall. Secondly, it can attenuate temperature fluctuation due to the water layer between the soil and the roof.
The soil is separated from the drainage system by a permeable fabric (Geotextile), which allows the passage of water, but prevents the soil from leaking into the water chamber. For the plant species used in this research, a soil with good drainage and low organic content was used. A composition of two parts of sand to one part of loam was employed.
The evaluation of the green roofs’ cooling potential is performed by the comparison between two housing prototypes with vegetated and non-vegetated roofs. Due to financial limitations and because of the exploratory nature of the research, it was not possible to use full-scale housing for the experiment. Therefore, small-scale structures are used to demonstrate the thermal performance of a non-green, traditional roof and a green roof. The experimental set-up comprises covering the roof of one of the prototypes with planted soil containers. Different types of housing prototypes are considered in this study. As shown in Figure 2, the Rio de Janeiro tests were carried out using small blockwork houses covered with metal sheeting, whereas in Sydney, metallic sheds were employed. In Australian housing, profiled metal sheet roofs are typically specified, and for this reason, the metal sheds were selected.
A simultaneous comparison between the records of temperature inside the vegetated and non-vegetated structures was made using data loggers that collect continuous temperature records over long periods of time. The temperature measurements were carried out using Extech TH10 Temperature USB Data loggers, using a time sampling of 30 min. The Rio de Janeiro tests were performed over 194 days, from 17 October 2012, to 29 April 2013, whereas the Sydney trial tests comprised a 97-day period from 11 December 2013, to 18 March 2014.
The data loggers were positioned at different heights inside each of the prototypes, according to the experimental site. In Rio de Janeiro and Sydney, they were placed 250 and 50 mm, respectively, below the top of the structure. All of the temperature differences observed are attributed only to the influence of heat incidence on the structures, given that the weather conditions between the vegetated and un-vegetated prototypes are identical.

Figure 3 presents a comparison between the non-green and green roofs’ internal temperatures, during the 194-day data collection period, which comprises the whole Brazilian summer period and also part of spring and autumn. Some of this work was partially reported in [24]. 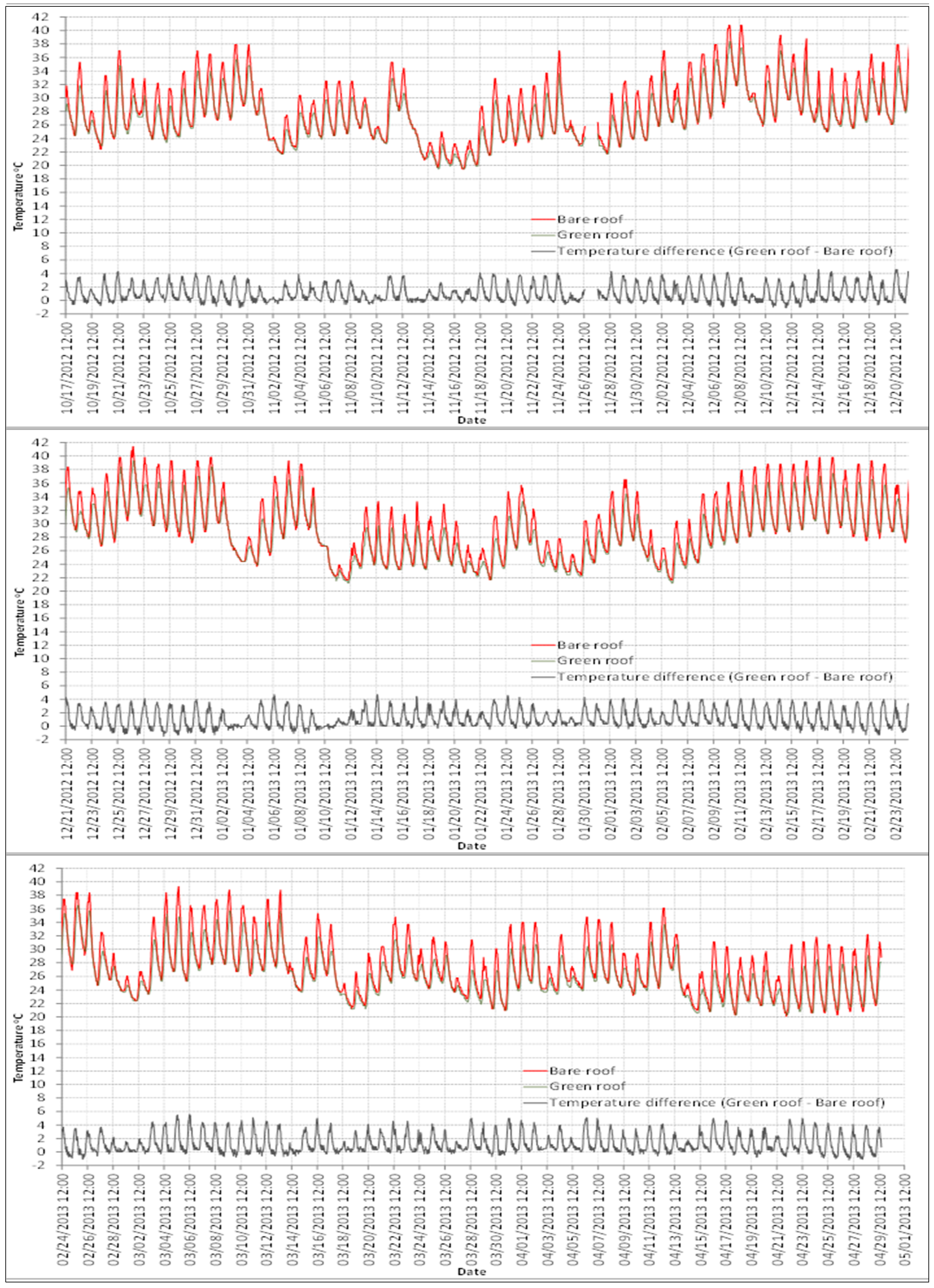 Figure 4 presents the typical detail of three out of the 194-day temperature comparison, where it mostly can be observed that the highest temperature differences are between 12:00 and 15:00.

Despite the shorter period, when compared to Rio de Janeiro data, it was observed that a significant green roof cooling occurs. However, according to the characteristics of the site where the experiments were undertaken, a particular pattern in temperature registers can be observed. As shown in Figure 5, a sudden reduction in temperature occurs both for non-green and green roofs around 3 pm, due to the shading created by adjacent buildings. This figure shows an attenuation in temperature variation for green roofs, which is consistent with their insulating properties. 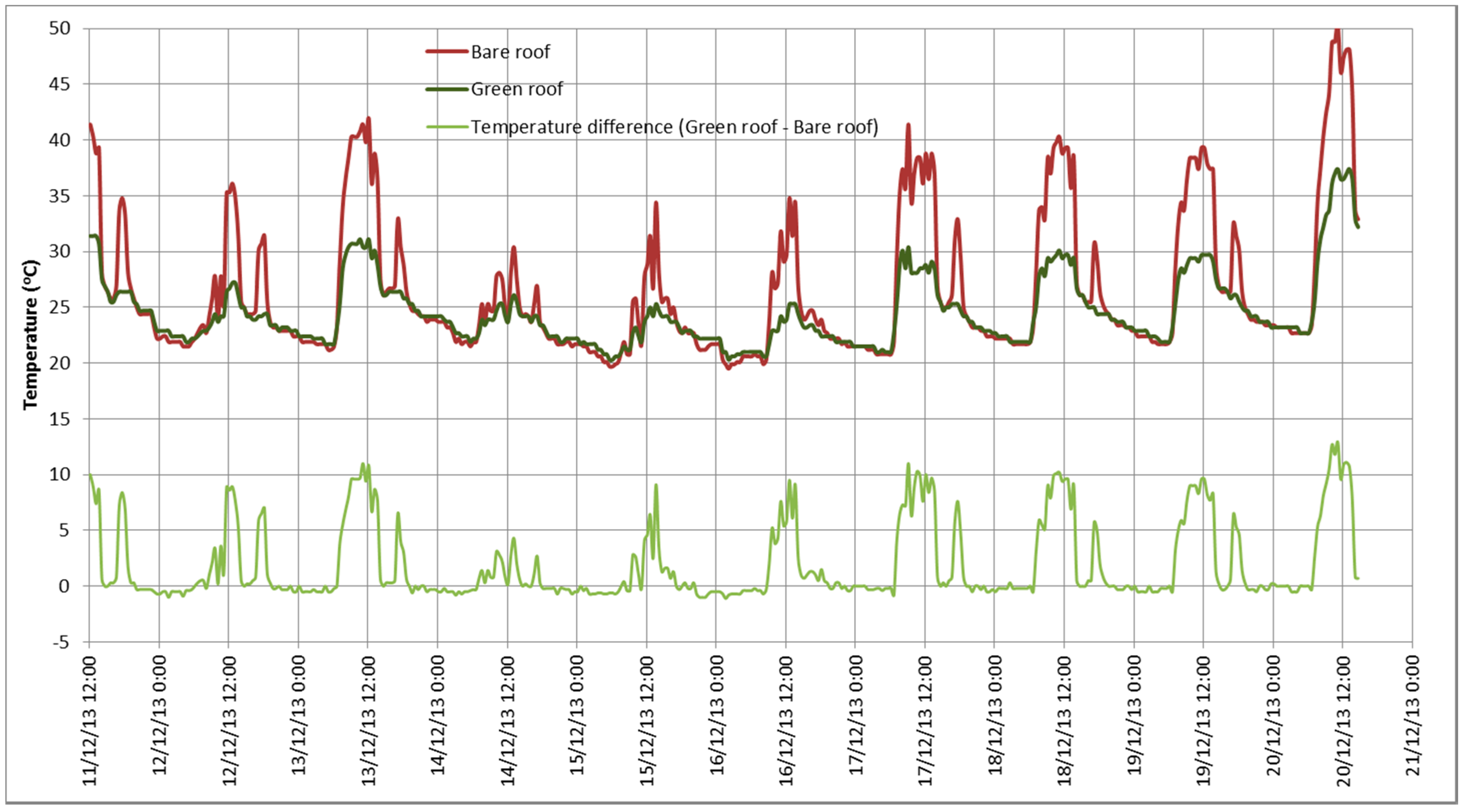 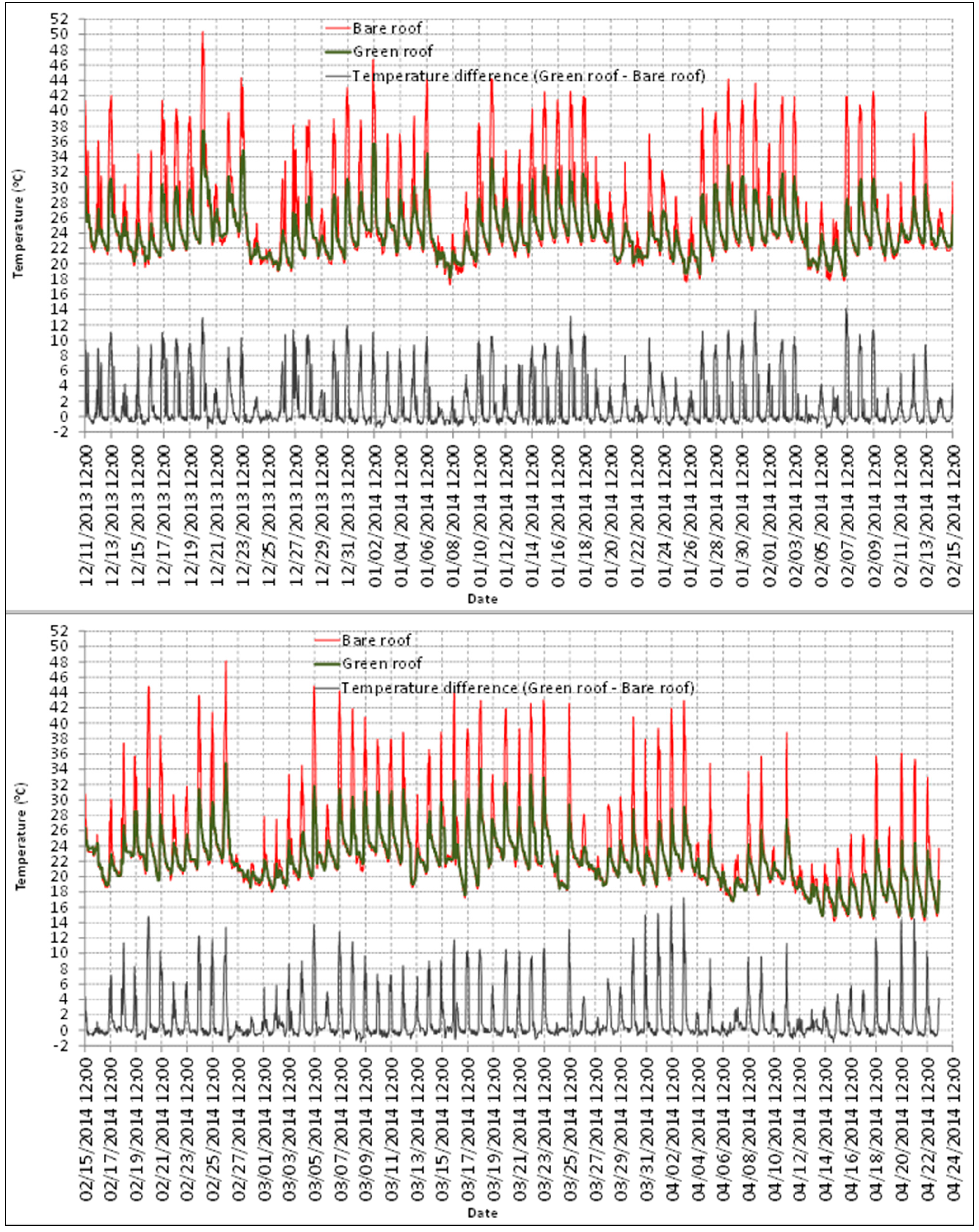 Figure 7 depicts a two-day detail of the whole set of data presented in Figure 6. Similarly to what was observed at the Rio de Janeiro site, the highest differences in the temperatures between green and non-green roofs also were detected around noon. Negative differences were evident practically along all nighttime periods, additionally corroborating the efficiency of the green roof in attenuating high and relatively low temperatures.

Both authors contributed equally to this paper.