Remediation of Groundwater Polluted by Aromatic Compounds by Means of Adsorption

In this work, an experimental and modeling analysis of the adsorption of four aromatic compounds (i.e., toluene, naphthalene, o-xylene and ethylbenzene) onto a commercial activated carbon is carried out. The aim is to assess the suitability of the adsorption process for the treatment of polluted groundwater, also when a multiple contamination is detected. Batch adsorption tests from simulated polluted groundwater are performed in single-compound systems and in two binary systems (i.e., toluene + naphthalene and o-xylene + ethylbenzene), at constant temperature (20 °C) and pH (7). Experimental results in single-compound systems reveal that all of the analytes are significantly adsorbed on the tested activated carbon. In particular, toluene and naphthalene adsorption capacities are the highest and of similar value, while for o-xylene and ethylbenzene, the performances are lower. The adsorption of these compounds seems to be influenced by a combined effect of several parameters, such as hydrophobicity, molecule size, structure of the molecule, etc. Experimental results in binary systems show a different behavior of the two systems, which confirms their complexity and explains the interest in these complex adsorption systems. In particular, toluene and naphthalene are mutually competitive, while in the case of o-xylene + ethylbenzene, only the former undergoes competitive effects. The analysis of the entire experimental data set is integrated with a dedicated modeling analysis using the extended Langmuir model. For both single-compound and binary systems, this model provides acceptable results, in particular for low equilibrium concentrations, like those more commonly found in groundwater, and for the compounds involved in adsorptive competitive effects. View Full-Text
Keywords: groundwater; adsorption; organic pollutants; activated carbon; Langmuir model groundwater; adsorption; organic pollutants; activated carbon; Langmuir model
►▼ Show Figures 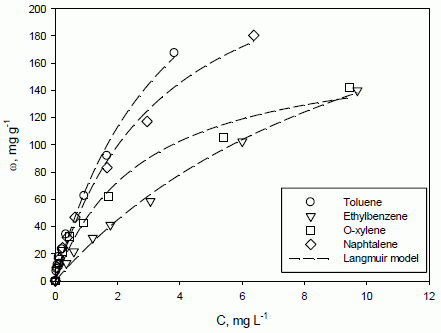