Sustainability after the Thermal Energy Supply in Emergency Situations: The Case Study of Abruzzi Earthquake (Italy)
Next Article in Special Issue

There are many opportunities for biodiversity conservation in organic farm systems. Successful and sustainable conservation efforts in organic systems, however, need to measure appropriate outcomes. In particular, data are needed on the breeding success of associated wildlife species. We measured nesting success of the American Robin (Turdus migratorius) in woodlands embedded within eight organic farms in eastern Nebraska. We modeled daily nest survival rate to identify land use and land cover patterns that optimize conservation of birds in organic farm systems. The percentage of a crop in the fields adjacent to linear woodlands best predicted daily survival rate. Daily survival rate was lower in fields adjacent to wheat and greater in woodlands adjacent to soybean fields, though the latter may be a weak effect. There was no evidence that reducing the area allocated to organic crop production would improve daily survival rate but rather an evidence of a patch-matrix interaction. These results suggest that, if suitable nesting sites exist, organic farmers can complement local conservation efforts without losing working farmland.
Keywords: associated biodiversity; conservation; land sharing; patch-matrix; soybean; wildlife; wheat associated biodiversity; conservation; land sharing; patch-matrix; soybean; wildlife; wheat

In 2010 and 2011, we monitored American Robin (Turdus migratorius) nests on eight organic farms in six counties of southeast Nebraska, USA. To locate nests, we systematically searched linear woody cover on participating farms twice a week during the breeding season (May-August). We checked active nests (those with eggs or young) at three or four day intervals after they were located [36]. Nest age was estimated by dates of transition. At each check, we documented the number of eggs and/or young, age of nest, and current nest fate. At the end of the nesting season, we estimated the percent coverage of each land use and land cover (Table 1) within 50 meters of each nest, a distance beyond the average observed foraging distance [32]; visually estimating, in the field, percent cover while standing at each nest site. In order to associate daily survival rate to organic farm management we selected model parameters associated with local land use and land cover patterns (Table 1) by reviewing published literature from American Robin and both woodland and agroecosystem biodiversity conservation [20,37,38,39,40].

Table 1. Descriptive summary (Minimum, Mean, Maximum) of estimated percent land use and land cover types measured within 50m of American Robins nests on organic farms in Nebraska in 2007 and 2008.
We used Program Mark [41] to estimate daily survival rate and to test a priori model combinations (Table 2) of the available land use and land cover patterns. We checked model parameters for multicollinearity. We tested a global model, individual models, and models organized by non-crop (e.g., linear and non-linear grasslands) and crop (e.g., high-intensity corn and soybean) land use and land cover types. We included wheat in multiple crop combinations due to its value as an alternative cash crop and classification as a lower-intensity crop. A model set that included nesting date was tested. We compared models using Akaike’s information criterion model selection for small sample size (AICc). Models were ranked and compared by delta AIC. We sorted competing models according to their Akaike weight. The top models (ΔAICc < 2) were averaged to estimate daily survival rate [42]. We estimated period survival rate using the Delta method [43].

A total of 119 nests were found during the two years of sampling, 56 in 2010 and 63 in 2011. Of these nests, 31 percent successfully fledged young. The top six models (ΔAICc < 4) of American Robin daily survival rate all included important crops to organic farmers in the region (Table 2). Nesting date was not included in top models. Daily survival rate was estimated at 0.93 ± 0.007. Nesting period survival rate was estimated at 0.15 ± 0.03. Daily survival rate was lower with a greater percentage of the local landscape as wheat and greater when nests were embedded in soybeans, though the latter may be a weak effect, with a 95% confidence interval that includes zero (Table 3, Figure 1). There was no evidence for an effect, positive or negative, of non-crop land cover, including presence of woody cover or grasslands.

Table 3. Beta estimates, standard error (SE) and 95% confidence limits from top model on daily survival rate of American Robins on organic farms in Nebraska in 2007 and 2008. Covariates are percent wheat and percent soybean within 50 m. 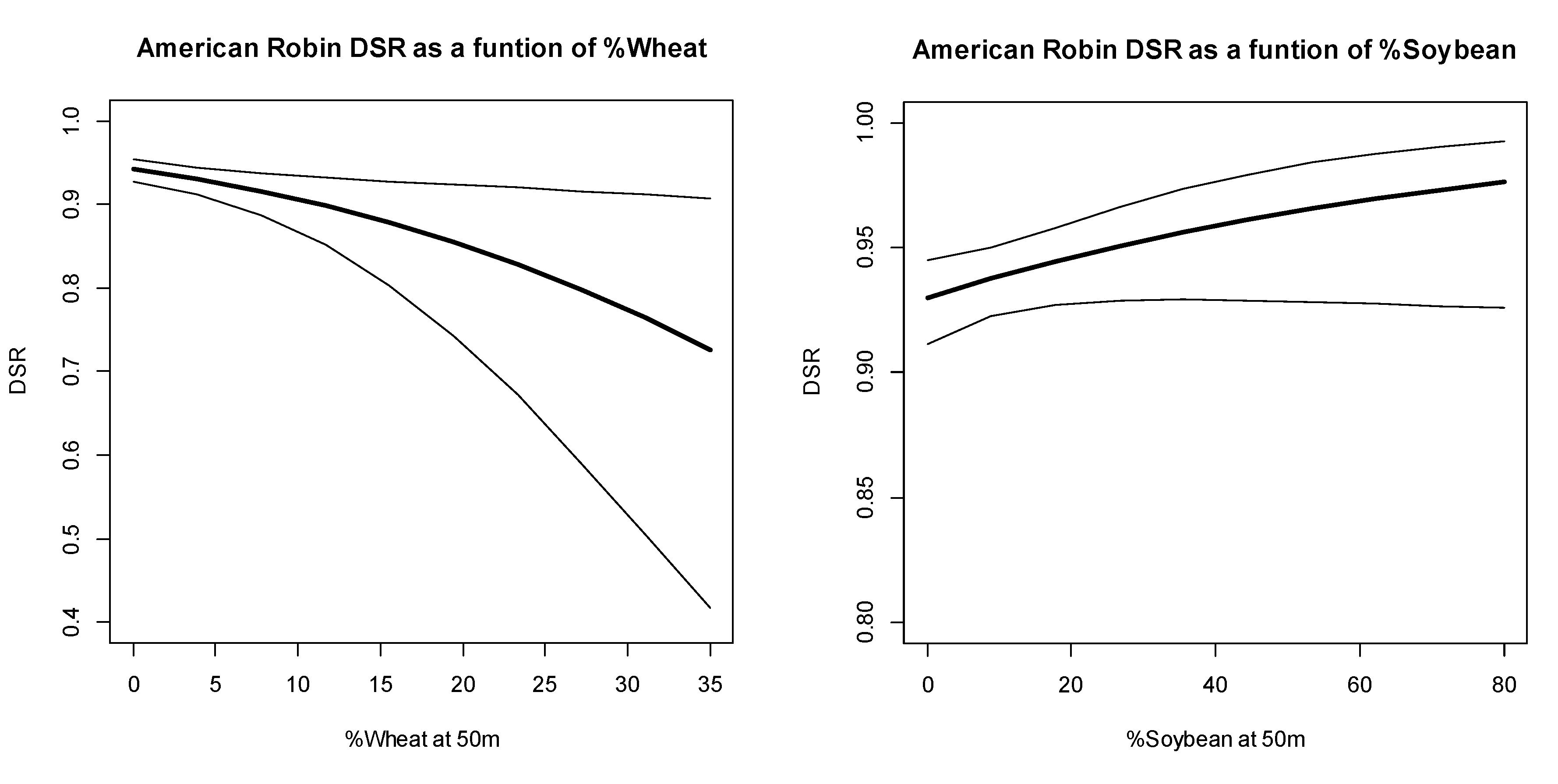 Conservation of biodiversity requires efforts outside of protected areas. Organic farming provides a wildlife-friendly agricultural landscape that can complement regional conservation efforts, including increasing bird abundance and richness [7,9]. Yet, to optimize the contribution of organic farming to species conservation, farming practices need to contribute to the breeding success of farmland bird species. In this project, we identified land use practices that organic farmers can adopt to enhance the contribution of their land to the improvement of nesting success of a farmland bird.
Our results present a clear example of patch-matrix interaction [44]. In particular, these data suggest that the choice of crop in the matrix may be as important as the non-crop habitat patch to daily nest survival rate of American Robins. In particular while a non-crop patch for nesting sites, in this case trees and shrubs, is necessary, we observed a decline in American Robin daily survival rate as a function of percent wheat in surrounding fields. In contrast, we see a weak effect of percent soybean, with an increase in daily survival rate as a function of the percent of land planted in soybean. Surprisingly, we did not see an effect of non-crop cover including no evidence that linear non-crop grassy areas [20] or woody cover [45] limited or enhanced nest success of the American Robin.
Different crop and field types may provide different benefits to birds at different times of the year [34]. Thus, the vegetation structure associated with these two crops may explain the observed patterns of daily survival rate. Both crops changed in percent ground cover and vertical structure over the sampling period. Early in the season (May–June), soybean fields are bare while wheat is rapidly growing in densely planted rows. Later in the year (July–August), wheat has been harvested, leaving short stubble in the fields. Soybean plants emerge through the growing season, reaching peak growth in late summer after most nests have fledged.
Because of the lack of vegetation, there may be greater foraging opportunities in soybean fields adjacent to nests, thus limiting the time that the adult birds have to spend away from the nest and not incubating or feeding young. Largely bare organic soybean fields would provide easy access to the high protein invertebrate populations preferred by breeding American Robins [46]. In contrast, the vegetation cover in wheat fields is denser throughout the year, perhaps limiting foraging opportunities. Even post-harvest, the stubble cover may increase foraging effort to such a point that robins may avoid wheat fields. The lack of response to grasslands may reflect the value of organic cropland providing greater foraging opportunities. The increased necessary foraging effort may also explain the lack of response to grass cover. Further work is needed monitoring adult and post-fledging movements [47] in organic systems to assess where American Robins and other species forage throughout the nesting season and how this may be associated with crop management.
Nest predation is an important source of nest failure [48,49]. It is possible that the linear woodlands in which many nests are embedded serve as corridors and edges for nest predators [40] while the agricultural matrix may limit the activity of the predator community [39]. For example, predation of Field Sparrow (Spizella pusilla) nests in North Carolina was lower when a greater percentage of the landscape was dedicated to agricultural production [39], though individual crops were not identified. In our study sties, wheat may provide cover and thus recruit predators, decreasing daily survival rate. Predator movement to nests embedded in soybean fields may be reduced as a result of being isolated by the bare soil associated with this crop during the early months of the growing season. American Robins will aggressively defend the nest [30]. Given evidence of reduced predation rates as an outcome of the presence of adult birds [50], it may be that time adult birds spend foraging away from the nest reduces nest defense. In addition to direct mortality, there is evidence of sub-lethal effects of predators, for example, reduced feeding rates at the nest [51] and in increased likelihood of predation following exposure to a predator even if the initial contact does not result in a nest failure [52].

In conclusion, these data move the discussion about conservation in organic agroecosystems beyond comparisons of organic to conventional to ways that organic farmers can optimize their contribution to biodiversity conservation. In particular, how crop selection may affect American Robin daily nest survival rate, provides an example lacking the perceived conflict between agricultural and conservation [5]. These data contribute to the land sparing/land sharing discussion; providing an example where farm-scale land sparing, in this case woodland patches, is complemented by land sharing in the adjacent crop matrix. Further data are needed for other farmland birds in North America, including both shrubland and grassland species [28,53], particularly those populations in decline in regions where organic farming is practiced at a sufficiently large scale to contribute to species conservation.

We thank the numerous landowners for providing access to their farm and insight in their farm management. United States Department of Agriculture (USDA) OREI Grant Number: 2009-51300-05603 and USDA McIntire-Stennis program provided funding for this project.