The Reconfiguration of Urban Public–Private Spaces in the Mall: False Security, Antidemocratization, and Apoliticalization

Transformation and Sustainable Development of Shopping Centers: Case of Czech and Slovak Cities

The research includes all shopping centers in the Czech and Slovak republics (Figure 1). The data was obtained from the authors’ internal database. The database comprising all shopping centers in both countries contains information on the opening day, GLA, tenant mix, parking places, and other indicators. The data was gathered continually (a regular survey of annual reports from shopping centers and developers.) and verified in the field research.
On the national level, the first group of methods is based on the description of temporal and spatial aspects of the shopping centers’ development in both countries [6,16,19,46,47]. The second group focuses on the classification of shopping centers in Czech and Slovak cities. The classifications, based on the typical methods of shopping center assessment, are made according to the following criteria: (i) Genesis on brownfields or greenfields, (ii) location in the city, (iii) size of the gross leasable area [6,33,48,49,50].
On the local level (the capitals of both countries), we used methods of spatial gravity and standard deviational ellipse to analyze the migration trends and spatial distribution characteristics of shopping centers [9,51]. As Shi et al. [9] (p. 95) noted, the spatial gravity of shopping centers is an important index for the measurement of shopping center distribution and is represented by points where the spatial forces of all the shopping centers in the region are in balance. We can explain the causes and characteristics of spatial change in shopping centers by studying their spatial gravity’s movement paths and speed. Attributes of the spatial distribution of shopping centers in Prague and Bratislava were calculated using standard deviational ellipse analysis in ArcGIS [52]. Standard deviational ellipse analysis was used to observe spatial directional trends of activities in the study area [53,54]. The ellipse method further advances the concepts of mean center and standard distance by identifying the directional variation of spatial spread captured by the standard distance. In other words, the stores are most spread out along the elongated axis than in other directions [55] (p. 57). A dataset usually describes a geographical phenomenon with certain directional differences. We can see the differences in the directions of expansion of shopping centers for a certain timeframe by comparing the slight differences in the standard deviational ellipses between different points in time [9] (p. 95).
The data was obtained from various sources as there is no integrated institutional source for shopping centers in the Czech Republic or Slovakia. The shopping centers and developers’ web pages were the elementary source from which the information was mainly taken. Professional articles published in topic-focused magazines represented the next source (Retail News, Moderní obchod (Modern Store), Retailmagazin.sk, Tovar a predaj (Goods and Sales), and so forth). The third source of information included statistical sources of national statistic authorities. The authors created this unique database by combining these sources.

3. Retail Transformation and Development of Shopping Centers in the Czech and Slovak Republics

4.1. According to Their Genesis in Brownfields or Greenfields

4.2. According to Their Localization

4.3. According to Their Size

The last selected classification criterion was the size of gross leasable area (GLA). Shopping centers were classified according to the ICSC methodology (Table 1). A typical feature for both countries is the construction of small shopping centers (more than half of all), and the least counted group includes very large shopping centers (Figure 6). Demand for very large shopping centers is higher in the Czech Republic than in Slovakia. Downsizing of GLA for newly opened shopping centers represents a sustainable trend in both countries. Shopping centers with a GLA of up to 40,000 m2 represent a more than 83% share in the Czech Republic; in Slovakia, it is 88%. An average GLA is relatively stable for Czech shopping centers; it remains at the level of 27,000 m2; it dropped from 22,000 to 20,000 m2 in the following five years in Slovakia [6].
As already mentioned hereinabove, in the Czech Republic and Slovakia, the current trend and approach towards the localization of shopping centers in Europe are declining from large-size projects that can be found in peripheral urban areas. These localities that already have typical rural features are under pressure concerning the increased intensity of automobile transport and land encroachment, which are mostly perceived as unfavorable, and in terms of socio-economic and environmental aspects, unsustainable, not only by residents but also municipalities and cities’ representatives [5]. Reduction in the construction of large new centers is typical, in particular, for Western Europe. Restrictive policies can be found in Great Britain [81], and in Italy and France [82]. These claims have also been proved by the studies performed by [74], which observe trends in the modernization of the existing centers. Apart from the reasons stated above, the changes in construction are often caused due to the market saturation and changes in shopping preferences.

5. Change in the Direction of Spatial Expansion of Shopping Centers in Capitals of the Czech Republic and Slovakia

This work was supported by the Slovak Research and Development Agency under Contract No. APVV-20-0302 and grant VEGA 2/0113/19 and by Masaryk University under grant number MUNI/A/1210/2020. 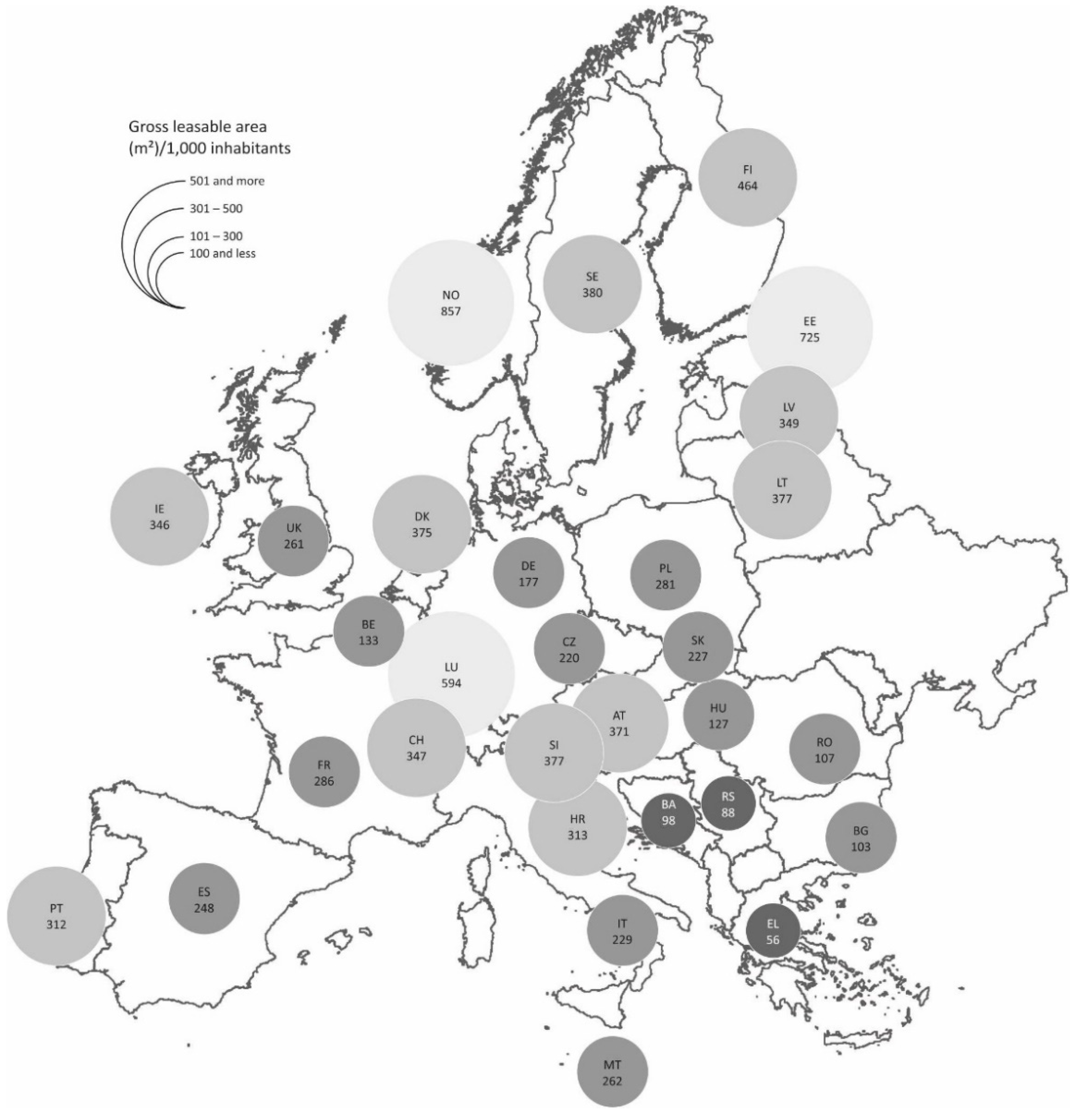 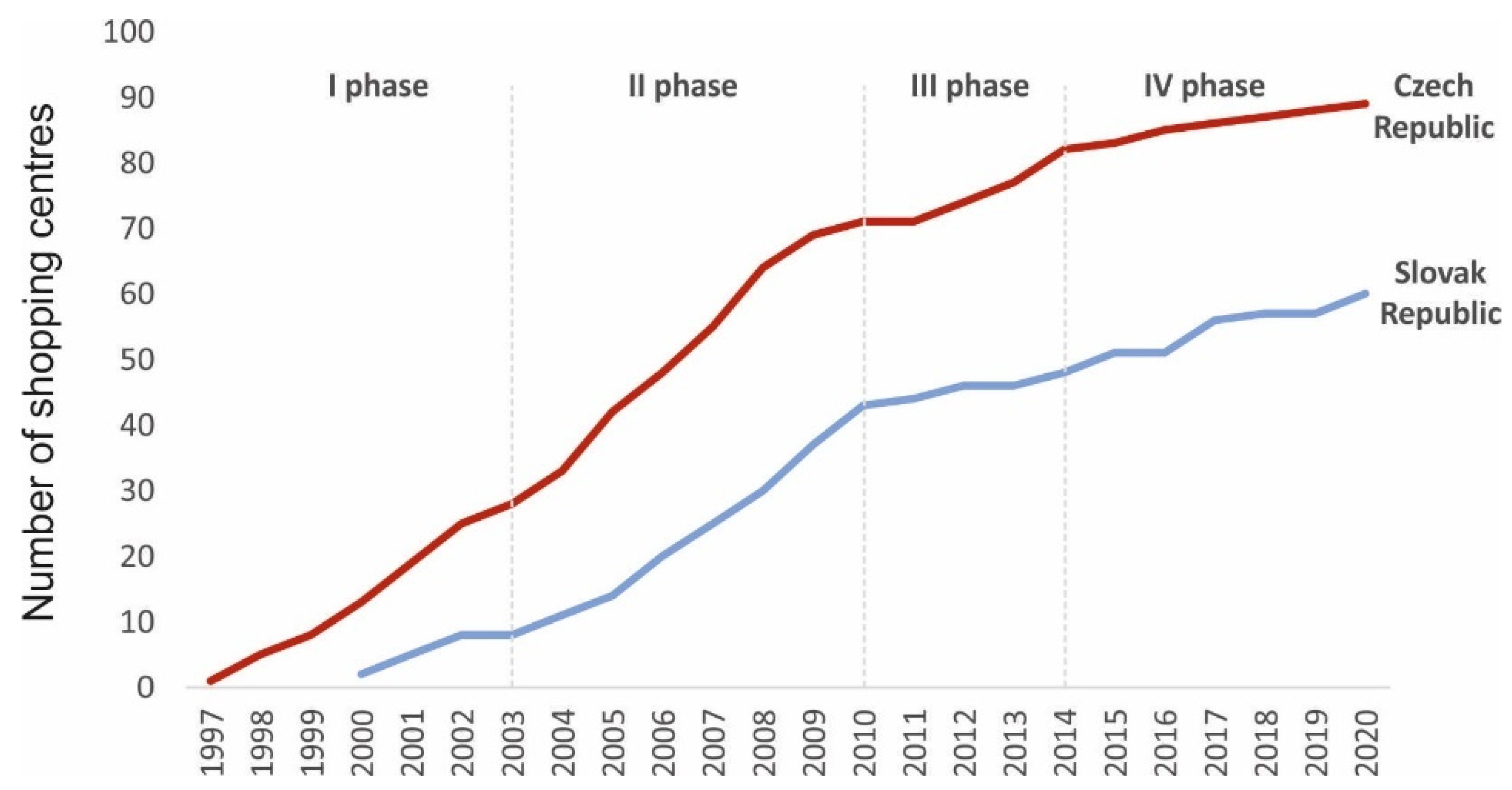 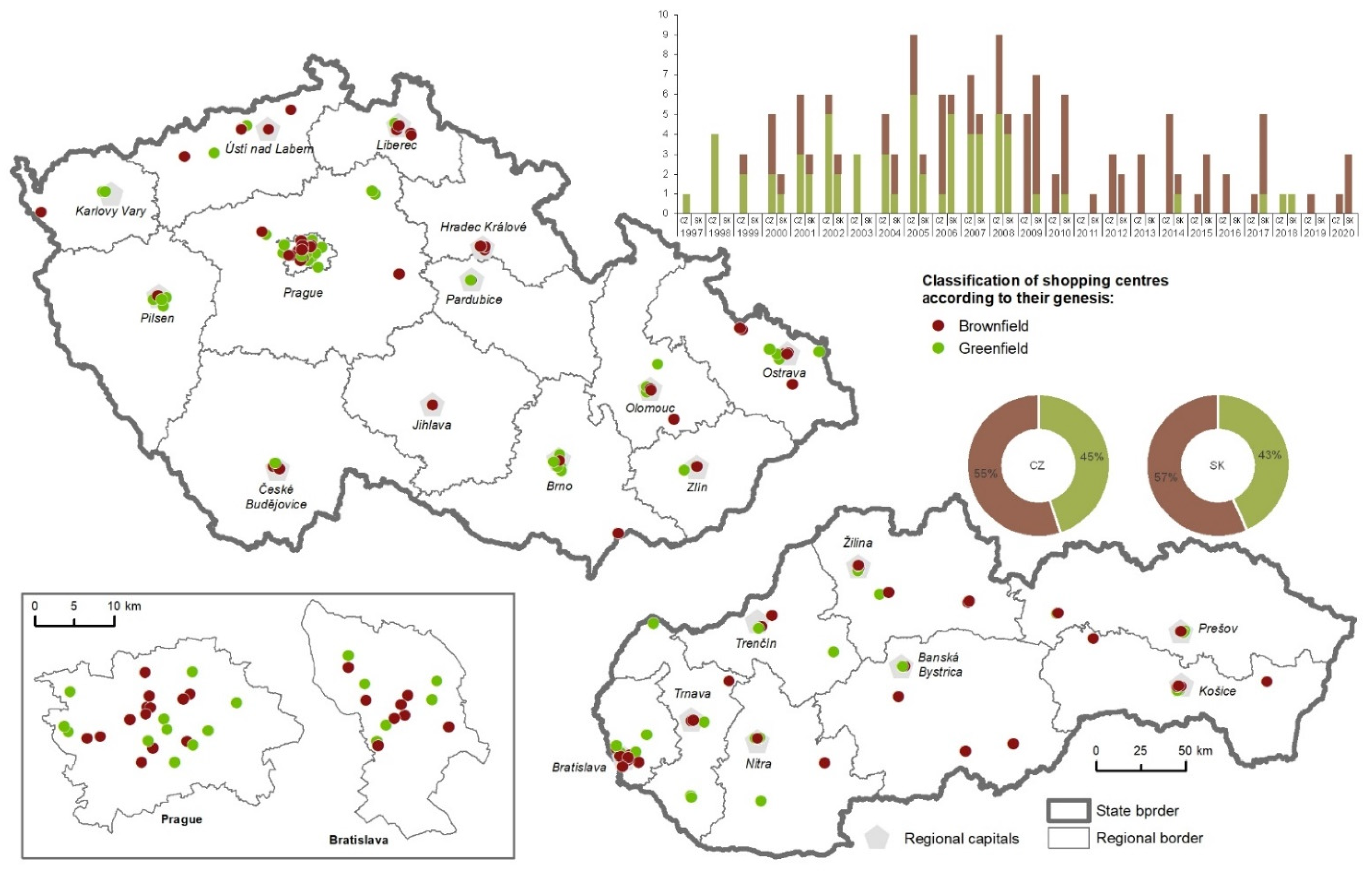 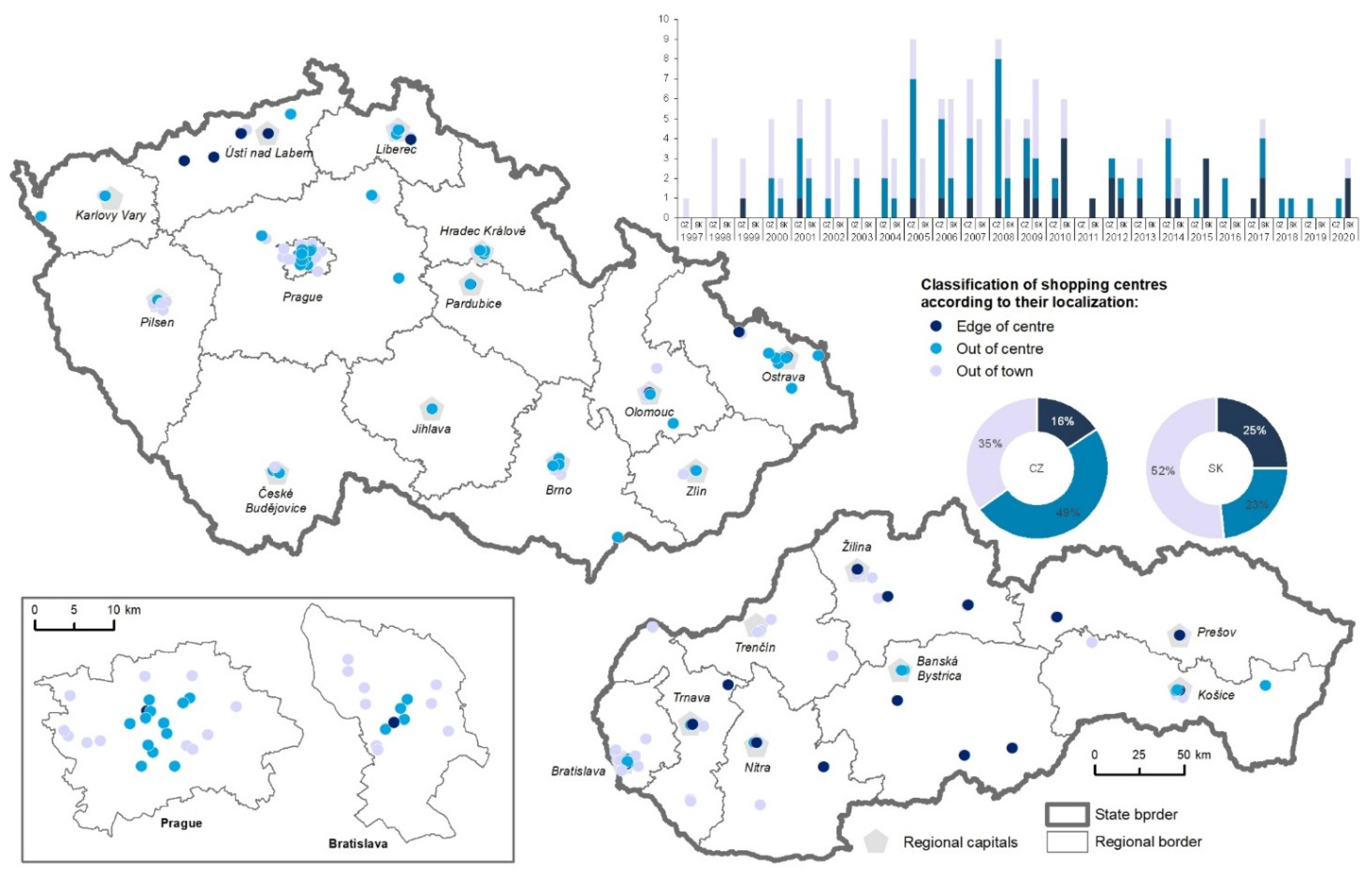