In this study, the compaction characteristics of recycled hot-mix asphalt (RHMA) were evaluated using the void content (VV), compaction energy index (CEI), slope of accumulated compaction energy (K), and lock point (LP). Then, the effects of the compaction parameters, including the gradation of the RHMA, reclaimed asphalt pavement (RAP) content, temperature of gyrations, and number of gyrations, on the compaction characteristics of RHMA were investigated. An orthogonal experiment was designed and the data collected were analyzed via range analysis; then, a regression model was generated relying on a quadratic polynomial. Furthermore, the regression model was used for the comparison and prediction of the mixture’s compactability during the material design. Finally, the compaction mechanism of RHMA was discussed from the perspective of the void content of RAP particles. The results showed that a finer aggregate gradation, a higher gyration temperature, a greater number of gyrations, and a higher RAP content were effective for increasing the compactability of RHMA. The range analysis results suggest that the gradation of RHMA has the greatest influence on compactability, followed by the RAP content. The RAP aggregate cannot diffuse to a new mixture completely, so the remained RAP particle reduces the void content of RHMA. Therefore, a higher RAP content up to 50% can help RHMA to achieve the designed void content with higher efficiency. View Full-Text
Keywords: hot-mix recycled asphalt mixture; compaction characteristics; RAP hot-mix recycled asphalt mixture; compaction characteristics; RAP
►▼ Show Figures 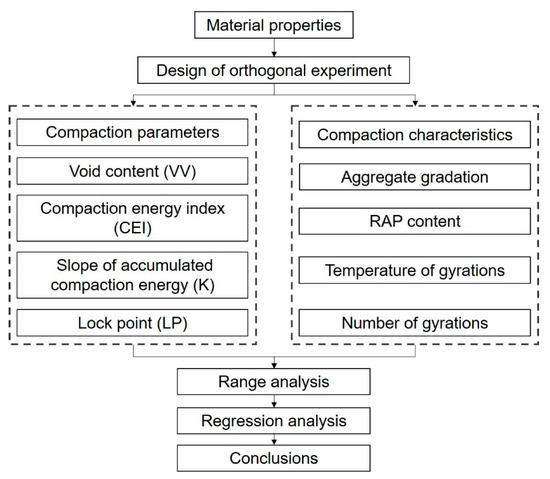