A schematic view of an inclined porous rectangular enclosure saturated by a nano-enhanced phase change material, studied in this work, is depicted in Figure 1. The active wall of the enclosed medium, which is along the y-axis and located at x = 0, is kept at a high temperature, i.e. Th. However, the other walls are fully insulated. The PCM and the nanoadditives on the NePCM are coconut oil and CuO nanoparticles, with the thermophysical characteristics listed in Table 1.
The length of the domian, i.e. L, is 40 mm, and the width, i.e. W, is 20 mm. The porosity varies as:
is the average porosiy. a as the porosity gradient is the input changeable parameter, and the b parameter is defined based on the values of and a.

NePCM melts over time, and the natural convection of molten NePCM occurs in the liquid phase. The transient phase change process with natural convection in the porous domain is described using the volume-averaged approach:
Mass conservation
Momentum equations in which,
Additionally, the permeability of the porous domain can be expressed as [32]:
Energy conservation in which,
The subscript mf denotes the metal foam. The thermal conductivity of PCM depends on the melt fraction of NePCM in an element. Thus, the melt volume fraction is used, and the effective thermal conductivity of metal foam and NePCM is evaluated as:
Some researchers argued for possible relations for evaluation of the effective thermal conductivity of a composite metal foam and the material inside pores, as reviewed in Ranut [33]. The below relation has been generally adopted in many literature works. Thus, it has also been selected for the current investigation [13,34]:

The density of NePCM is the linear average of the PCM and nanoparticles [35]: where VFna represents the nanoparticles’ volume fraction. Here, the well-known Brinkman relation is applied to approximate the dynamic viscosity of molten NePCM:
The coefficients of thermal expansion and effective heat capacities are also computed as the linear average of density and the expansion coefficient. Density is also involved in this relationship, since the production of these terms includes thermal terms and buoyancy force:
The well-known Maxwell model is applied to estimate the thermal conductivity of NePCM:

The cumulative heat transferred () from the hot wall to the NePCM is exactly equal to the stored energy in the unit. can be calculated as the following:
The melting volume fraction is evaluated as:
In the practical application of the LHS unit, the performance of the unit can be evaluated by charging power. This parameter shows the capacity of PCM to store energy and depends on the amount of the energy stored at 100% melting volume fraction:
To further discuss temperature distribution, the temperature uniformity index TU(t) was proposed, w as described below:

The Finite Element Method was employed to solve simultaneous dominant partial differential equations (PDEs). User-defined codes were developed to model phase change in a non-uniform porous medium. The PDEs are discretized by the use of rectangular elements in the computational region. As previously mentioned in detail, the thermophysical characteristics of NePCM are determined based on temperature, defining the liquid, mushy and solid zones, and the concentration of dispersed nanoadditives. Mesh quality is a key parameter influencing the precision of results for a numerical problem. To find an appropriate grid, five sets of grids are examined. The selected parameters in this test are L = 50 mm, VFna = 0.06, εavg = 0.900, a = 4, γ = π/4, PPI = 10. As Figure 2a,b depict, no significant changes in the Melted Volume Fraction (MVF) and the temperature at the center of the enclosure could be seen when varying the mesh sizes. Based on these results, a uniform mesh of 150 × 150 intervals will be used for the present study. Additionally, the time-stepping with a maximum number of 8 iterations in each time step is automatically adopted.
The validation of the employed numerical approach can be confirmed by comparisons between the simulated results and the numerical/experimental data available in the literature [26,36]. In the first comparison, the melted liquid domains of the experimental study conducted by Al-Jethelah et al. [26] and the established numerical model are illustrated in Figure 3. Al-Jethelah et al. [26] carried out an experimental study to track the melting flow corresponding to a bio-based NePCM inserted in an aluminum foam enclosed medium with constant heat flux imposed on the left sidewall. The bio-based PCM and high thermal conductivity particles were coconut oil and CuO. The dimensions of the porous enclosed medium were 72 mm in height and 50 mm in width. In the comparison, illustrated in Figure 3, PPI = 5, ε = 92 and κ = 3.3142 × 10−7.
According to the comparative illustrations in Figure 4, the obtained melted liquid domains from the established model are compatible with the experimental observations. In the second comparative analysis, the reliability of the current adopted model is tested through the progressive melting fronts from this work and the experimental-numerical study discussed in [36]. The problem physics studied in [36] was a square enclosed medium with a size of 100 mm containing Octadecane with the fusion temperature of 30 °C. Several other researchers simulated the investigation conducted by Bertrand et al. [36] as a benchmark. As shown in Figure 4, the numerical approach agrees with numerical-experimental outcomes, demonstrating that melting flow is appropriately modeled.

The melting heat transfer of NePCMs in non-uniform metal foam was addressed systematically. Porosity changes linearly, in the x-direction. Non-linear porosity could improve local effective thermal conductivity in conduction-dominant regions by decreasing porosity, while low porosity could facilitate natural convection in convection-dominant regions. The FEM was applied to solve the governing equations. The impacts of the volume fraction of nanoparticles, average porosity of metal foam, porosity gradient, inclination angle, and pore size were investigated on the phase change process and melting rate. The results were reported in the form of isotherms, melting maps, streamlines, and graphs of melting rates and stored energy. The following main outcomes were found:
The focus of the present study was thermal energy storage, which is concerned with the melting of PCM. Investigation of solidification (discharging) in a non-uniform metal foam could be subject to future studies.

The data will be available on request. 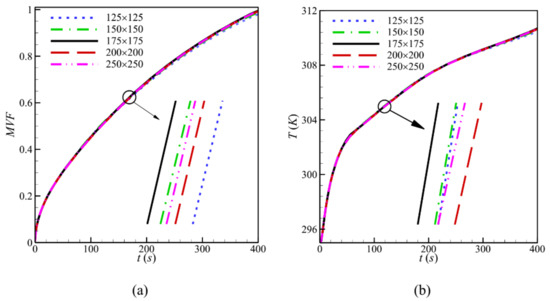 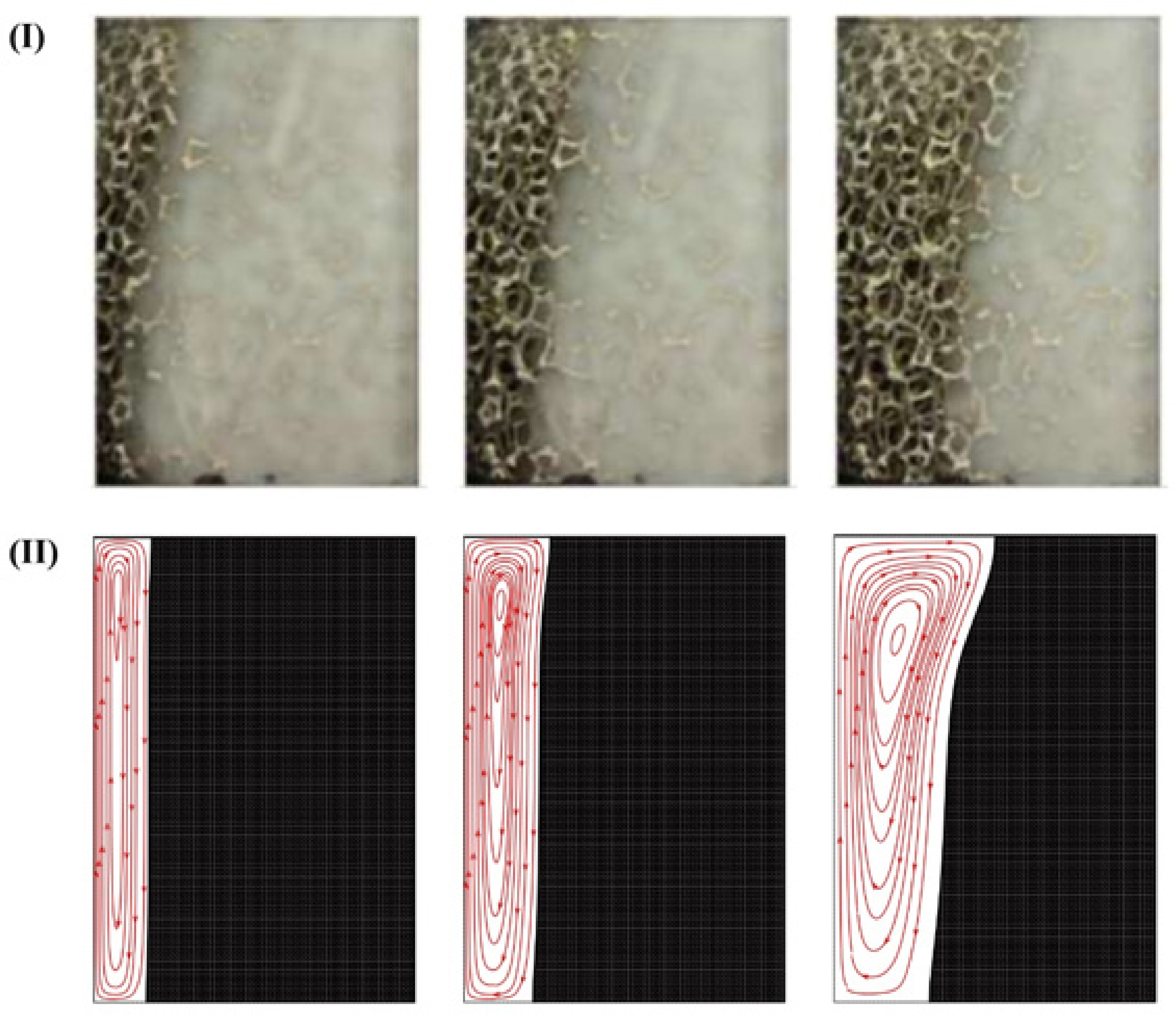 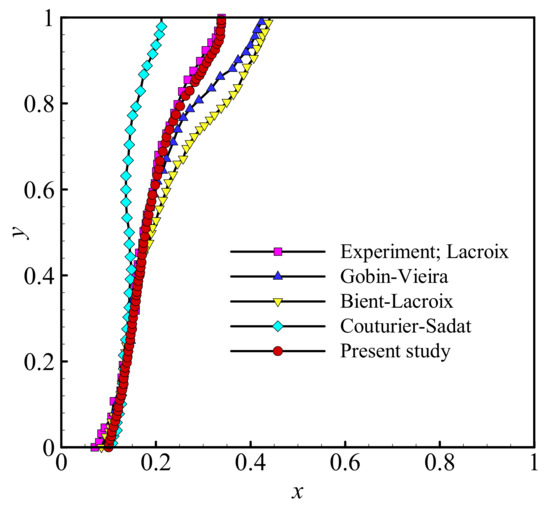 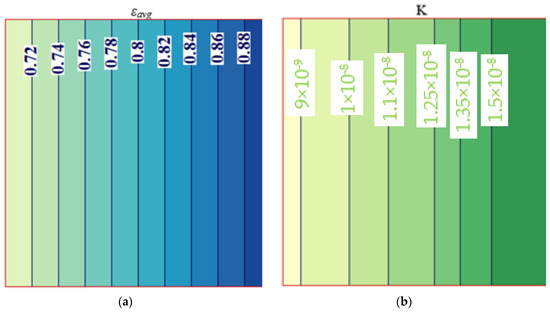 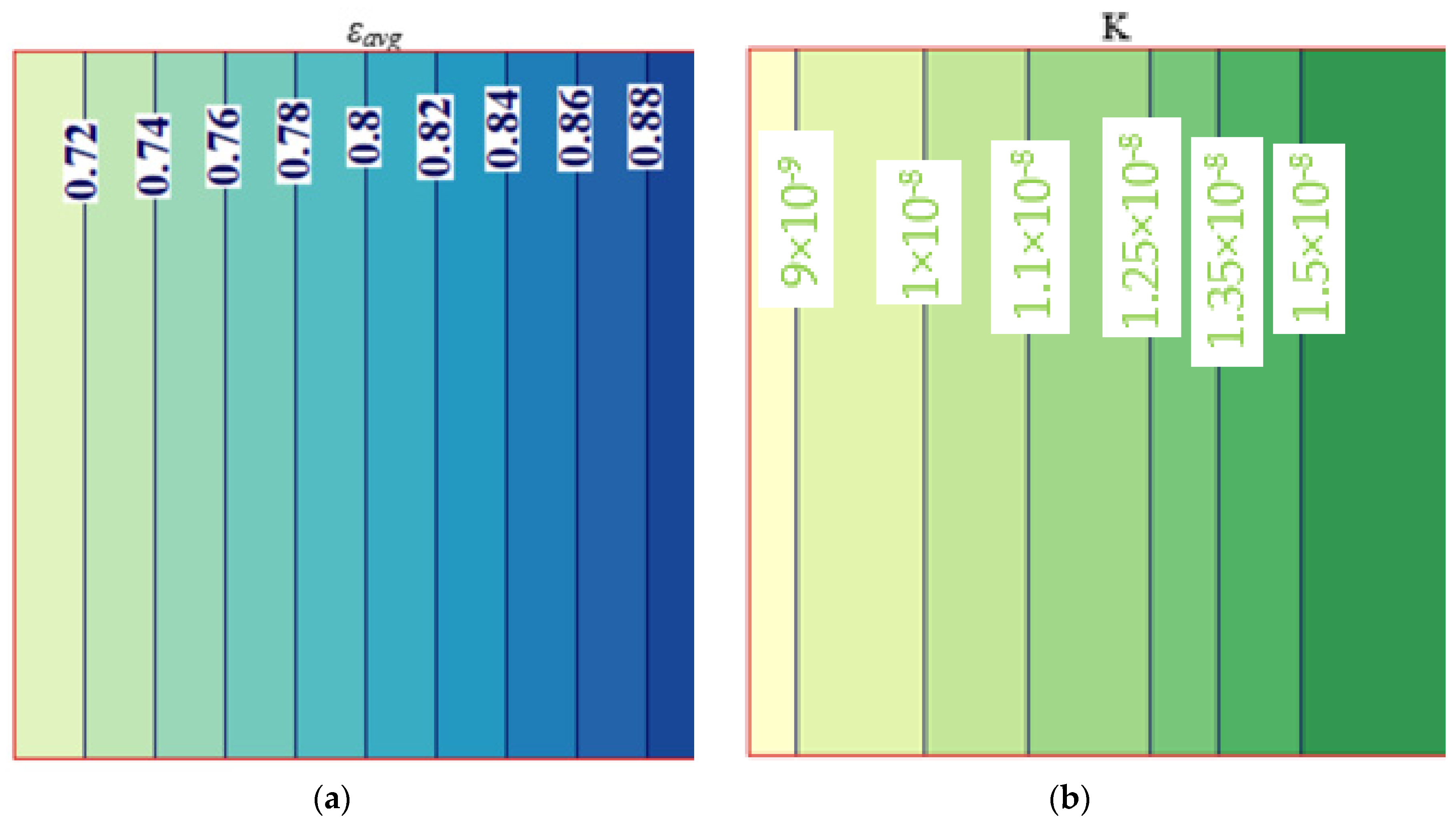 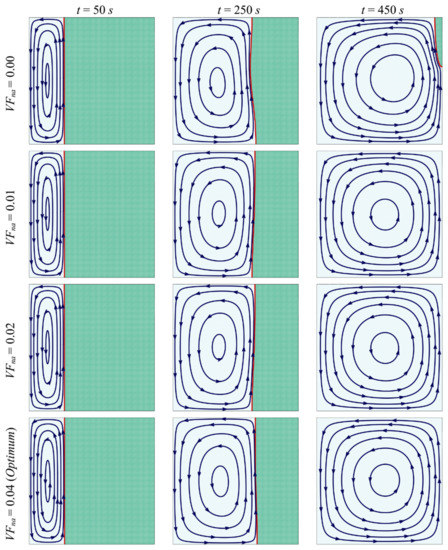 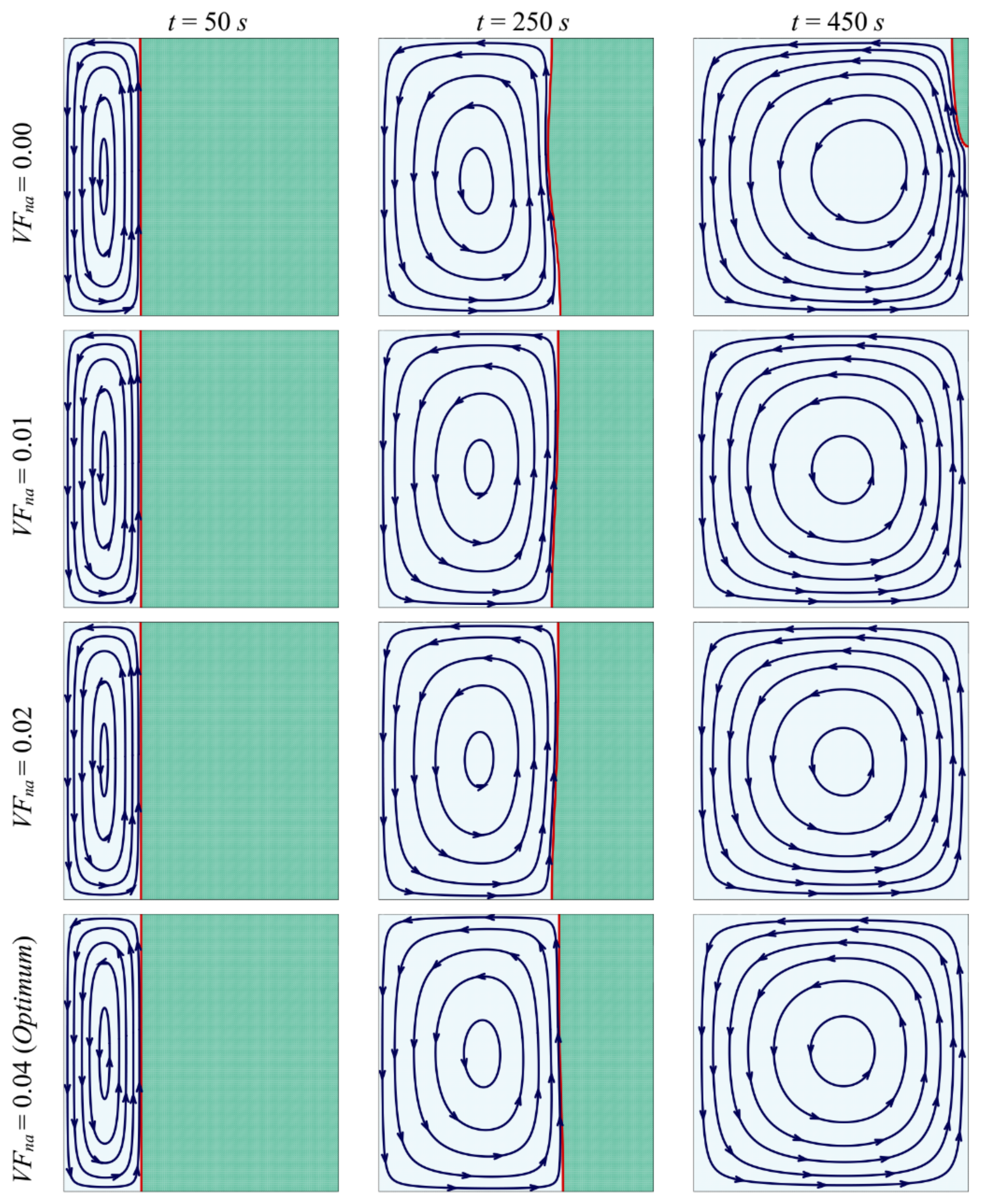 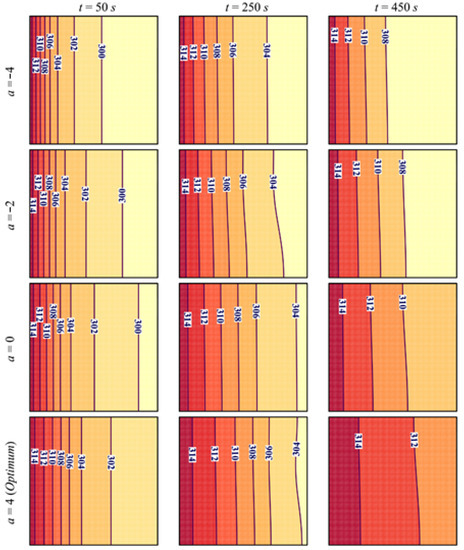 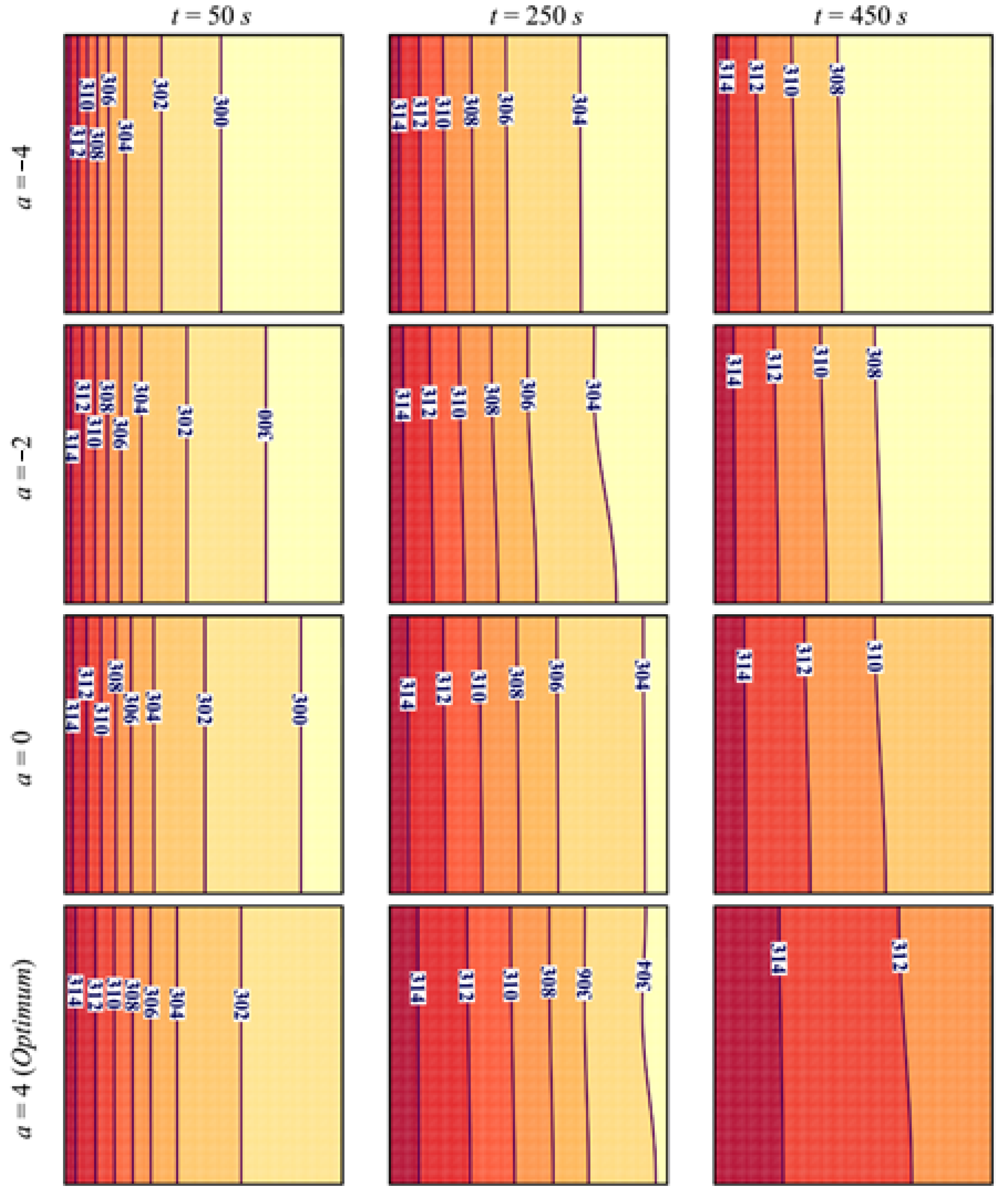 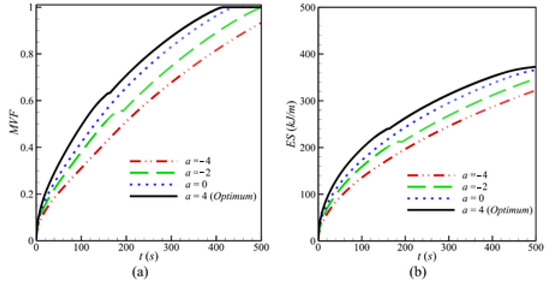 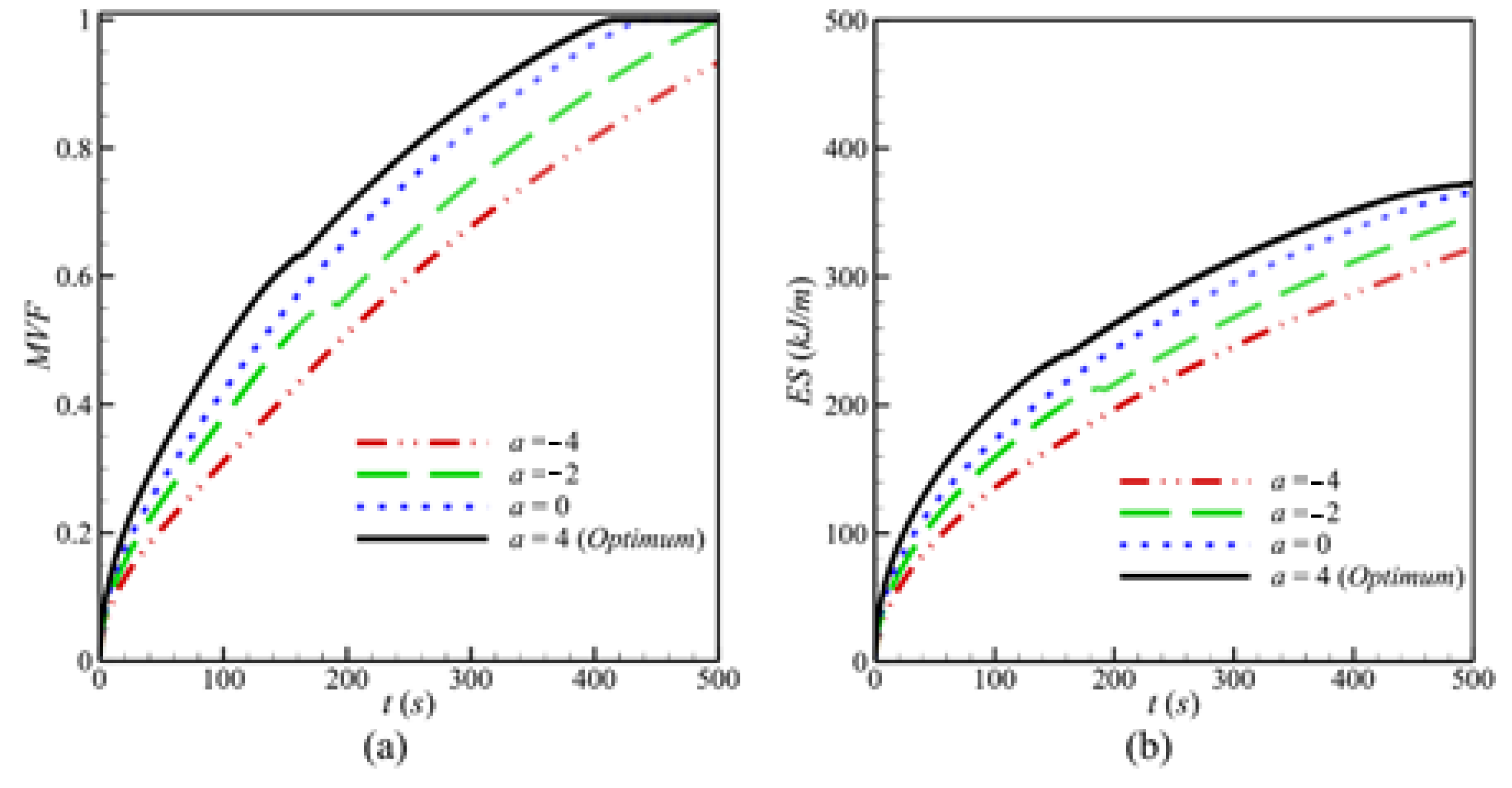 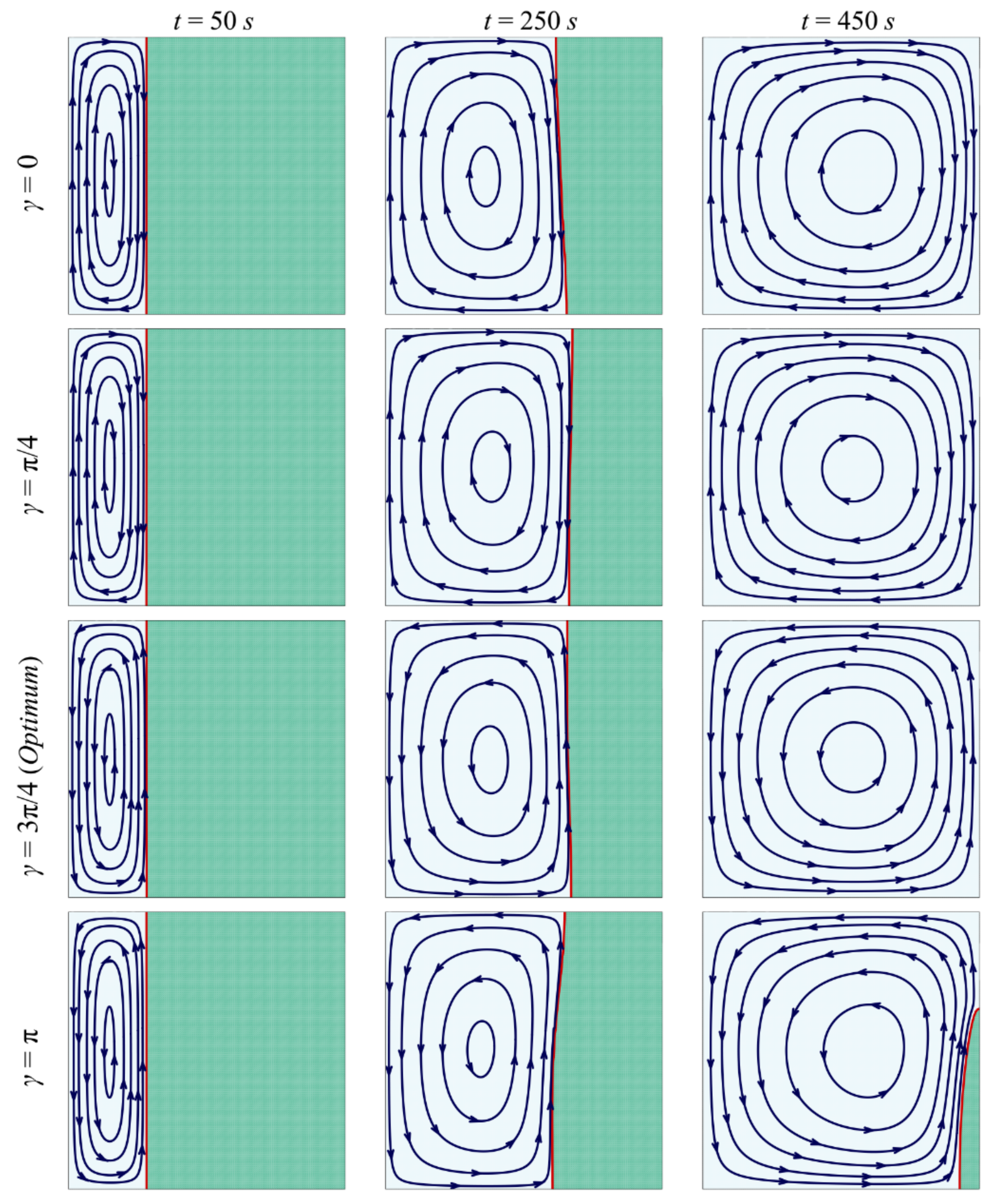