To analyze the characteristics, influencing factors, and microscopic mechanisms of county-level city shrinkage, this paper uses a quantitative push-pull model to explore the shrinking counties of Shandong Province between 2000 and 2018. The measurement method formulates three research objectives. First, the shrinking intensity and characteristics are analyzed according to statistics about the average annual rate of population growth, the primary production proportion, and public expenditure. Second, the influence factors are explored. Living standards, industrial development, social input, and public resource indicators are selected to quantitatively identify the push factors and pull factors and the correlated relationship of how the factors influence the population decline using ridge regression. Finally, the circular feedback mechanism and push-pull effect of multiple factors are explained. How do the factors affect each other and which is the decisive factor shaping county shrinkage? The push-pull mechanism is analyzed using dynamic relationship testing and the Granger causality test. The results show that the shrinkage of county-level cities faces common problems, including lack of resources, slowing down of the economy, and declining cityscape quality of life, which are the push factors for the population decline. There are differentiated characteristics of shrinkage. There has not yet been a full-scale recession in Shandong Province in terms of the degree of shrinkage. The towns with population loss accounted for only 15.4%, and the loss of population was less than 10% in ten years. In terms of impact mechanisms, county economic strength has a nonlinear correlation to population migration. Some counties tend to shrink in population and society. The degradation of the cultural environment, quality of life, and social welfare highlight social shrinkage signs in counties. A healthy living environment, equal public services, and a slowing down of relative deprivation have become essential pull factors for migration. County governments should shift from economic growth to people’s well-being, balancing government governance, economic growth, cultural development, environmental protection, and improving the livability level, as they are important directions for improving shrinking counties’ resilience. View Full-Text
Keywords: counties; shrinkage; push-pull model; characteristics; influencing factors; mechanism counties; shrinkage; push-pull model; characteristics; influencing factors; mechanism
►▼ Show Figures 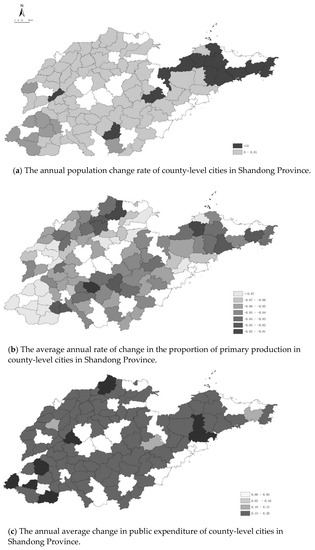