Evaluation of the Impact of Separative Collection and Recycling of Municipal Solid Waste on Performance: An Empirical Application for Chile
Next Article in Special Issue

The Individual Dimension of Digital Innovation: The Altered Roles of Innovation Agents and Market Actors
Previous Article in Journal

Human Capital in Digital Economy: An Empirical Analysis of Central and Eastern European Countries from the European Union

The hypercompetitive global economy of the 21st century is a hub of innovation, technology, talent, skills, speed, efficiency, productivity, and satisfaction. Within this context, the organizations are looking intensely for people with skills and talents that can differentiate themselves in all that noise. The human capital became slowly but surely a mean of efficiency and growth, especially through the premises of digitization, and a key issue of sustainability. The current research is meant to identify and highlight any correlations that might appear between the population’s welfare of 11 Central and Eastern European Countries (CEECs) which are members of the European Union (EU), and the components of the digitization trend, including the new human cloud industry, ICT, and the connectivity to the Internet of Things. In order to achieve the needed insights, the multiple regression analysis was employed, and the latter tested the panel models with fixed effects, both from a temporal and country perspective. The results showcased a positive connection between the dependent and independent variables, confirming that the digitization of the economy and the developed human capital will ultimately lead to the increase of population’s welfare. Moreover, the findings are consistent with specific insights for each of the 11 CEECs, showing that digitization and the influence of human capital is differentiated across the latter in terms of their overall effect and amplitude. The research is limited by the timeframe and countries included in the study, and it can be furthered by determining the impact of digitization on the economies of the EU28 countries grouped by level of development, and by using other significant indicators for analysis. View Full-Text
Keywords: human capital; digitization; ICT; welfare; CEE countries; multiple regression analysis; digital economy human capital; digitization; ICT; welfare; CEE countries; multiple regression analysis; digital economy
►▼ Show Figures 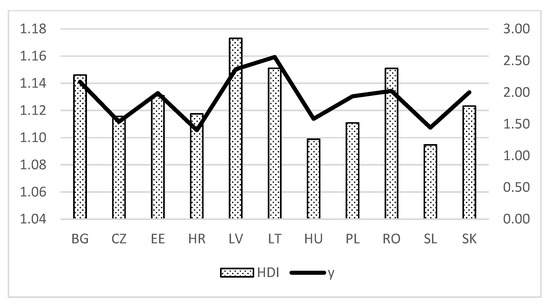