High levels of meat consumption are increasingly being criticised for ethical, environmental, and social reasons. Plant-based meat substitutes have been with reservations identified as healthy sources of protein in comparison to meat. This alternative offers several social, environmental, and probably health benefits, and it may play a role in reducing meat consumption. However, there has been a lack of research on how specific meat substitute attributes can influence consumers to replace or partially replace meat in their diets. Research has demonstrated that, in many countries, consumers are highly attached to meat. They consider it to be an essential and integral element of their daily diet. For the consumers that are not interested in vegan or vegetarian alternatives to meat, so-called meathybrids could be a low-threshold option for a more sustainable food consumption behaviour. In meathybrids, only a fraction of the meat product (e.g., 20% to 50%) is replaced with plant-based proteins. In this paper, the results of an online survey with 500 German consumers are presented with a focus on preferences and attitudes relating to meathyrids. The results show that more than fifty percent of consumers substitute meat at least occasionally. Thus, approximately half of the respondents reveal an eligible consumption behaviour with respect to sustainability and healthiness to a certain degree. Regarding the determinants of choosing either meathybrid or meat, it becomes evident that the highest effect is exerted by the health perception. The healthier meathybrids are perceived, the higher is the choice probability. Thus, this egoistic motive seems to outperform altruistic motives, like animal welfare or environmental concerns, when it comes to choice for this new product category. View Full-Text
Keywords: meat substitute; meathybrid; consumer preference; plant-based proteins meat substitute; meathybrid; consumer preference; plant-based proteins
►▼ Show Figures 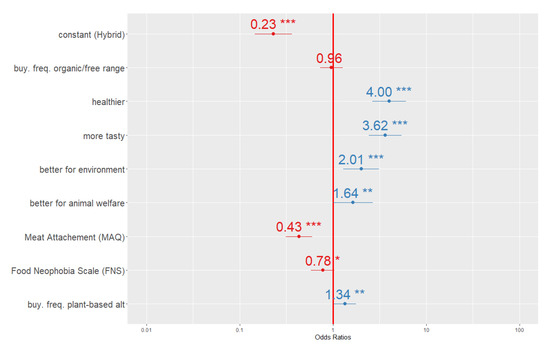