:
This work proposes a novel concept for an intelligent and semi-autonomous human-cyber-physical system (HCPS) to operate future wind turbines in the context of Industry 5.0 technologies. The exponential increase in the complexity of next-generation wind turbines requires artificial intelligence (AI) to operate the machines efficiently and consistently. Evolving the current Industry 4.0 digital twin technology beyond a sole aid for the human decision-making process, the digital twin in the proposed system is used for highly effective training of the AI through machine learning. Human intelligence (HI) is elevated to a supervisory level, in which high-level decisions made through a human–machine interface break the autonomy, when needed. This paper also identifies and elaborates key enabling technologies (KETs) that are essential for realizing the proposed HCPS.
Keywords:
wind turbine; human intelligence; artificial intelligence; machine learning; digital twin; Industry 5.0

1. Introduction to the Bigger Picture

-
We propose using the DT to train the AI. Both physical data, such as those from SCADA and SHM, and simulated data from high-fidelity numerical models are fed into the AI, making the system more dynamic and robust than the current AI-assisted wind turbine systems that are typically data-hungry.
-
In the proposed concept, the HI supervises the entire HCPS and collaborates with the AI by bringing radical innovations to each module and making high-level decisions to break the control autonomy, when deemed necessary.
-
Projecting from the current state-of-the-art technologies, we identify and elaborate the KETs that are essential for the realization of the proposed concept.

WT technology has just arrived in the era of Industry 4.0, which is formed by integrating physical wind turbines and their digital twins into a cyber-physical system. The coupling between digital models and their physical counterparts is facilitated by the rapid development of several technologies, namely robust and sophisticated sensors, high-fidelity numerical models, computational power, machine learning, and information transfer technology, e.g., big data and the Internet of Things (IoT).
In the future, WT technology will enter a new paradigm in which the diverging strengths of HI and AI are integrated into a single system. Conceptually, AI should able to make decisions with human-level precision or even beyond. However, the effectiveness of these decisions depends on the extent and quality of the training the AI receives. Quick decision making on an operational routine level is most effectively trained by solving a comprehensive set of numerical problems by using a DT. Decision making on a strategic level necessitates the long-term experience and empirical data of the HI gathered over several decades. That is, the different ever-evolving WT designs, the development of novel fabrication materials and manufacturing methods, the constantly changing weather conditions and market demands, etc., impose considerable uncertainty that may not be covered by the DT training space of the AI. For this reason, we advocate a semi-autonomous decision-making system in which the training of the AI should rely on a combination of DT technology and HI.
The cooperation between machines and humans is appreciated through human–machine interfaces in order to combine the strategic cognition of humans with nano-quick data processing speed and the consistency of machines. Networked sensor data interoperability enables humans to customize high-hierarchy decisions on a strategic level bespoke at scale. The central role of HI is a distinctive feature of Industry 5.0 compared to its predecessor according to researchers [16,17] and technology visionaries [18]. Inspired by the aforementioned pioneering work, this paper proposes an Industry 5.0 tier concept for the wind energy industry by building on existing Industry 4.0 technologies.
Figure 1 depicts the concept of the envisioned HCPS for WTs with an operational efficiency far beyond any current schemes. Human–machine cooperation evolves the current DT technology into a semi-autonomous system that uses supervised machine learning to base its decision-making process on previous experience and implements the optimal decision in quasi real time. This goal will be achieved by introducing three feedback loops that work simultaneously and collaboratively.
The red loop in Figure 1 illustrates that future WTs are embedded in an HCPS and operated by an AI using supervisory control and data acquisition (SCADA) in conjunction with SHM. The AI allows quasi real-time predictions and subsequently determines optimal operation parameters, which are fed back into the WT controller for instantaneous action. In this feedback process, the AI not only gathers data locally from one single WT but also collects far-field data from throughout the wind farm, e.g., approaching wind gusts or WT failure occurring elsewhere in the domain.
The green loop in Figure 1 depicts the training scheme of the AI, which is based on a continuous update of the damage state in the DT model through a live feed of SHM measurement data and keeps a medical journal of every individual rotor blade. Subsequently, using the SCADA feed, the DT predicts the evolution of the current damage for a set of key operational parameters to assess structural reliability, thereby creating a set of case samples. These case samples are consequently used to train the AI through a continuous recalibration of the parameter space. The computational efficiency of the DT facilitates the solution of a large number of damage evolution problems as a function of different WT control parameters, i.e., training samples. The AI seeks decisions that consider the specific preconditions prevalent in the individual blades and avoid certain load cases to decrease the likelihood of failure.
The blue loop in Figure 1 shows that the HI plays a higher-level supervisory role in direct communication with the AI through a human–machine interface to define the general superordinate directive. The HI plays an essential role in this system by providing innovation to the AI, DT, and physical WTs, such as improving and updating the mathematical formations of numerical models used by the DT and, if necessary, realigning the structural health state with the AI through on-site actions such as damage inspections. The active participation of HI in the HCPS enables a dynamic and creative process that constantly evolves and upgrades itself over time.
The inner workings of the DT shown in Figure 1 deserve a closer look and a separate treatise with a particular emphasis on the rotor blades. Figure 2 shows that the physical blade on the left-hand side is horizontally mapped to a DT on the right-hand side. Communication between the real world and the digital space is established using Industry 4.0 technologies such as the IoT, cloud computing, and big data. Three important stages throughout the life cycle of a blade are depicted in Figure 2, namely (i) manufacturing, (ii) operation and monitoring, and (iii) maintenance. Monitoring of the blade manufacturing process parameters is crucial for the identification and later tracking of damage throughout its lifetime. Therefore, the DT already comes into existence with the production of the blade containing manufacturing defects detected by automatized scanning procedures. The initial defects and manufacturing imperfections are stored in the archive of the DT uniquely associated with the particular blade. A numerical model of the as-built blade is created, and the initial defects are discretized. The DT is equipped with a computationally super-efficient probability-based numerical damage analysis tool capable of predicting the evolution of the current damage state stored in the archive. After the blade is endowed with SHM sensor systems and installed, it is linked to the DT, which receives a live feed of the structural health status (c.f. Figure 1). The archive of the DT contains information about the form, size, location, and type of the damage and is continuously updated throughout the blades’ lifetime using SHM data and blade inspection data.

The aforementioned KETs are just a starting point and have not yet reached the required technological readiness level necessary to sustain an HCPS, as outlined in this work. Nevertheless, the relevant KETs in other sectors such as mass production, the automotive industry, and the aerospace industry are considerably more advanced compared to the wind industry. The advancement in these sectors with extensive efforts carried out by leading high-tech organizations, such as NASA, the U.S. Air Force, Airbus, Tesla, IBM, and Huawei, continues to provide a driving force for translating, adapting, and implementing similar technologies into the wind energy sector. Incorporating the advancement of these KETs into the proposed HCPS will enable the realization of more autonomous and smart wind turbines in the future.
Projecting Industry 4.0-to-Industry 5.0 technology leaps into the distant future bears a good deal of uncertainty with respect to developmental periods and the precise way of realization. Nevertheless, technological advancements, particularly in sensor technology, smart materials, drone technology, AI, the IoT, and quantum computing, continue to grow at an incredible speed, so much so that Industry 5.0 can already be seen on the horizon at the beginning of the third decade of the 21st century (see Figure 4). An HCPS for WTs will likely become operational and continue to mature in the coming one to two decades, contributing to the United Nations’ SDGs in affordable and clean energy, innovating for sustainable industrialization, and combating climate change, which will eventually benefit all humanity.

We would like to thank the three anonymous reviewers for their valuable comments and kind suggestions to this work. 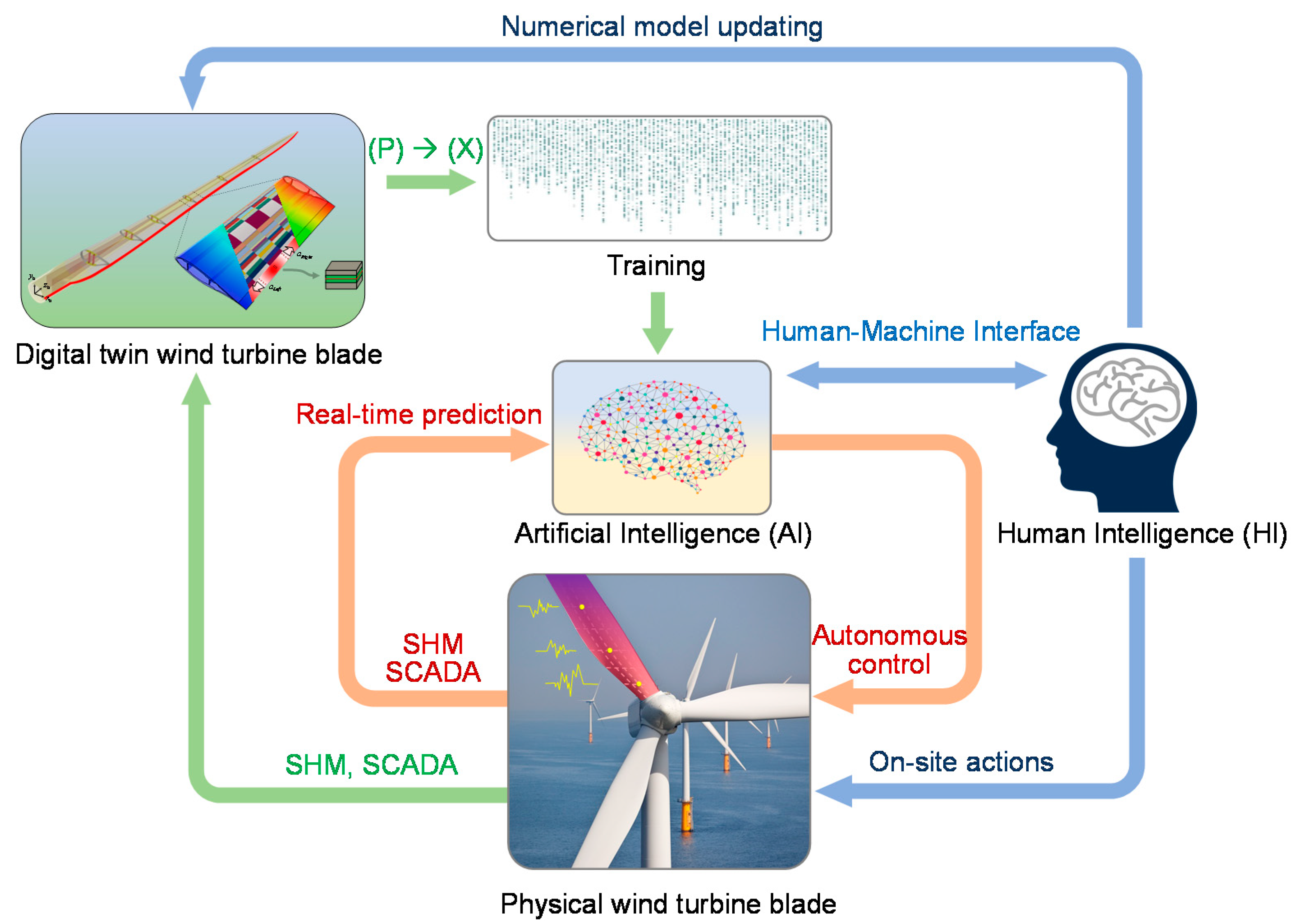