The Role of Motivations in the Segmentation of Ecotourism Destinations: A Study from Costa Rica
Previous Article in Special Issue

Family Welfare Expenditure, Contraceptive Use, Sources and Method-Mix in India

The outcome variable for the study is switching to modern contraceptive methods for those who discontinued their previous methods in the last five years. As the method-related information is available only on certain currently used modern contraceptive methods (viz. pill, IUD, and injectables), the reuse and switching from the previous methods (both modern and traditional methods) is possible to these three modern methods. The pill, injectables, and IUD are considered short-acting and long-acting reversible modern contraceptive methods, respectively. However, the injectable users have been merged with the IUD due to the small sample size and categorized as long-acting reversible contraceptives (LARC) in this paper. Also, both the methods (IUD and injectable) need similar program support unlike the pill [18]. Thus, the method switching has been categorized into five groups viz. (1) reuse of the previously discontinued method, (2) ‘other modern methods’ to pill, (3) traditional methods to pill, (4) ‘other modern methods’ to LARC and (5) traditional methods to LARC (for detailed categorisation, please see Table 1). The categorization of modern and traditional methods of contraception also varies among the researchers particularly for Lactational Amenorrhea Method (LAM) and Standard Daily Method (SDM) [18,19]. In this study, both the method such as LAM and SDM were included in the traditional methods because these methods only help to identify the fertile period and suggest that couples avoid sex, but they do not prevent pregnancy after sex [19].
The main predictor variable for the study is method information received by contraceptive users about side effects, how to manage side effects, and other methods. The responses to these questions have been recorded in binary form (‘no’ and ‘yes’). A possible eight combinations of ‘no’ and ‘yes’ of these three methods related information have been made for investigating the differentials in the association between variation in the information received by the users and switching behaviors. Besides, a range of socioeconomic and demographic variables which have possible effects on method switching have been controlled in the multivariate analysis (Table A1). These variables could have potential effects on the reuse or switching of contraceptive methods because these variables have been identified in the previous literauture as potential determinants of contraceptive use dynamics [14,20].

This is the first comprehensive study that investigates the association between method information provided to the contraceptive users and the switching of the contraceptive methods in India. The findings call for program interventions to provide comprehensive method information to the users at the time of initiation because it gives them freedom to choose and switch to more suitable methods. The reuse of the method is possible because choice or compulsion needs to be understood more comprehensively. Little information provided about contraceptive methods delimits the progression to other methods, hand in hand, restricts users to a fixed method even if the method is risky and causes dissatisfaction to the user. Thus, this may create a vicious cycle for users having little or no information regarding the three information-related indicators. Emphasis needs to be given to providing information about how to deal with the side effects to the users who want to space their childbearing for a longer time. As a consequence, they can use LARC such as IUD and injectables. In turn, the informed choice of contraceptive methods to the clients would help to protect reproductive health and rights and thereby to achieve the sustainable development goal—3.7. A large number of Accredited Social Health Activists (ASHA) and other peripheral frontline health workers serving across India have a great potential to provide the method information to the clients if their role can be improved to providing comprehensive method information.
This, the cycle of reuse and discontinuation can be turned into switching to other methods if users are informed about other methods. Comprehensive information about side effects, how to manage side effects, and other methods received by clients gives them a choice to select a more suitable and comfortable method freely and thus may enhance the possibility of switching.

The data used in this study is drawn from the openly accessed data Demographic and Health Survey which is available from this url: https://dhsprogram.com/data/available-datasets.cfm (accessed on 10 October 2018). 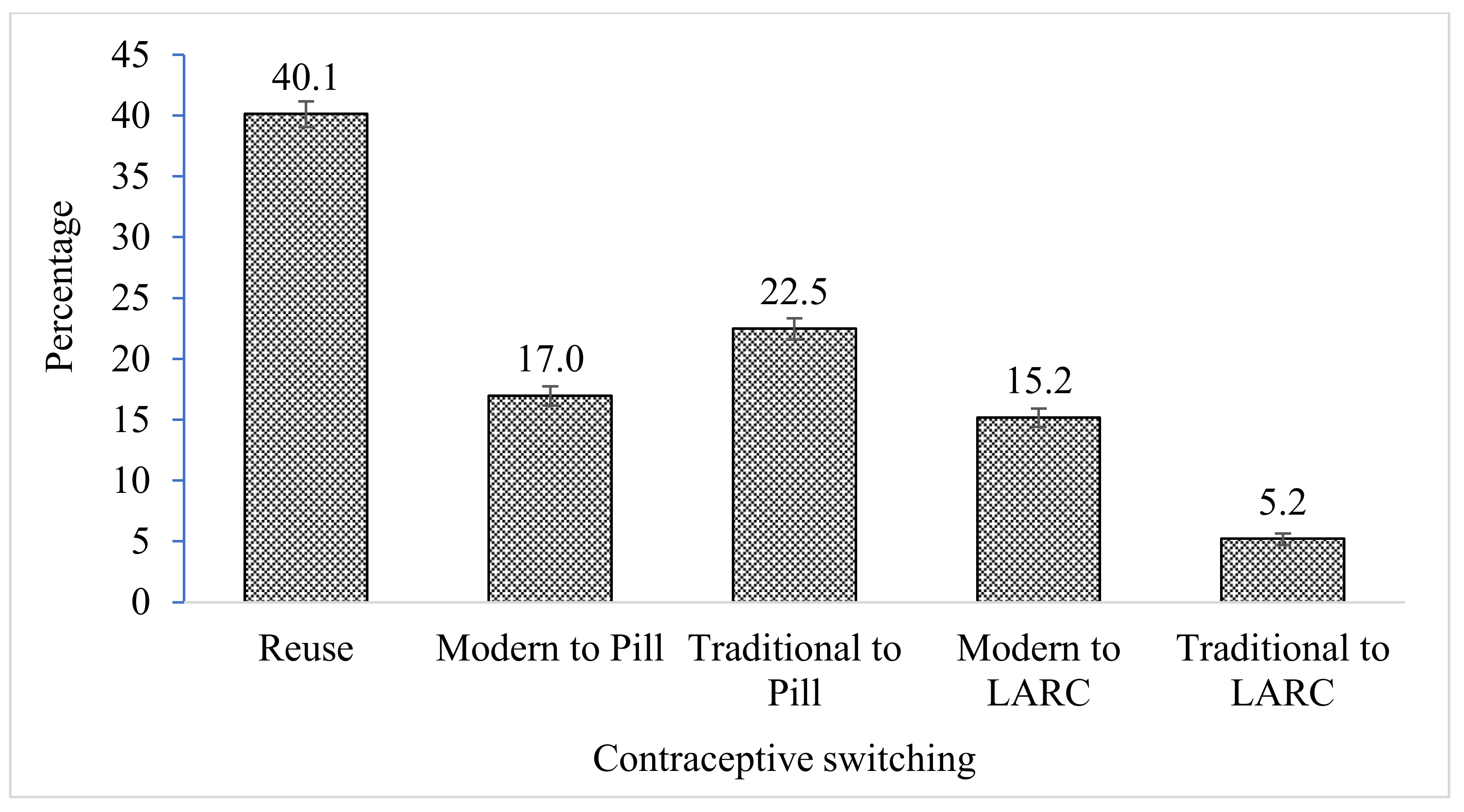