Pullout Behaviour of Geogrids Embedded in a Recycled Construction and Demolition Material. Effects of Specimen Size and Displacement Rate

Selected Insect Pests of Economic Importance to Brassica oleracea, Their Control Strategies and the Potential Threat to Environmental Pollution in Africa

The most common destructive insect pests affecting cabbages in African smallholder farmers include Plutella xylostella, Helula undalis, Pieris brassicae, Brevycoryne brassicae, Trichoplusia ni and Myzus persicae. Those insect pests infest cabbages at different stages of growth, causing huge damage and resulting into huge yield losses. The African smallholder farmers use cultural and synthetic pesticides to control insect pests and minimize infestations. The cultural practices like crop rotation, weeding and handpicking are used to minimize the invasion of cabbage pests. However, those practices are not sufficiently enough to control cabbage insect pests although they are cheap and safe to the environment. Also, the African smallholder famers rely intensively on the application of broad-spectrum of synthetic pesticides to effectively control the cabbage pests in the field. Due to severe infestation of cabbages caused by those insects, most of African smallholder farmers decide to; first, increase the concentrations of synthetic pesticides beyond the recommended amount by manufacturers. Secondly, increase the rate of application of the synthetic pesticides throughout the growing season to effectively kill the most stubborn insect pests infesting cabbages (Brassica oleracea var. capitata). Thirdly, they mix more than two synthetic pesticides for the purpose of increasing the spectrum of killing the most stubborn insect pests in the field. All those scenarios intensify the environmental pollution especially soil and water pollution. Moreover, most of insecticides sprayed are made with broad-spectrum and are hazardous chemicals posing environmental pollution and threats to natural enemies’ ecosystems. Therefore, this paper reviews Brassica oleracea var. capitata insect pests and control measures as a potential environmental pollution threat in African smallholder farmers. View Full-Text
Keywords: phytochemicals; Plutella xylostella; Helula undalis; biological control and cultural practices phytochemicals; Plutella xylostella; Helula undalis; biological control and cultural practices
►▼ Show Figures 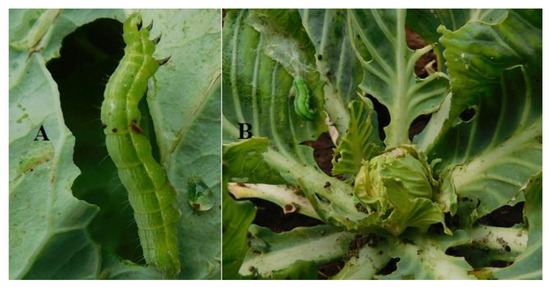