Synergy of the (Campus) Commons: Integrating Campus-Based Team Projects in an Introductory Sustainability Course
Next Article in Special Issue

This study presents a simple methodology for the evaluation of gait with accelerometers, for rapid and simple application, in which we employ current balance tests in clinical practice (Timed Up and Go, Chair Stand Test and Six-Minute Walk Test). The aim was to determine whether the accelerometric valuation of gait can detect alterations in balance. The sample of this cross-sectional research, made during the months of May and June 2018, was composed of 145 healthy adult women (x = 63.8 ± 8.41 years), from the city of Ourense (Spain). They walked with a triaxial accelerometer at the fourth lumbar vertebra for a distance of 20 m. The test was repeated three times, and the mean of the three measurements was used in the analysis. There was a reduction in the values of acceleration recorded along all three of the axes and in the root mean square as the age increased. This reduction was very significant for the minimum values registered along the vertical and transverse axes, and for the maximum values along the mediolateral axis. Only the maximum values of the vector module demonstrated significant differences among the three age groups. A regression model allowed us to identify the values that give more information on the Timed Up and Go Test, namely: the maximum values of the root mean square and the mediolateral axis. An exhaustive analysis of the vertical and mediolateral axes and the vector module allows for the detection of early alterations in the automatic gait pattern. View Full-Text
Keywords: age; anthropometry; gait; falls; functional performance age; anthropometry; gait; falls; functional performance
►▼ Show Figures 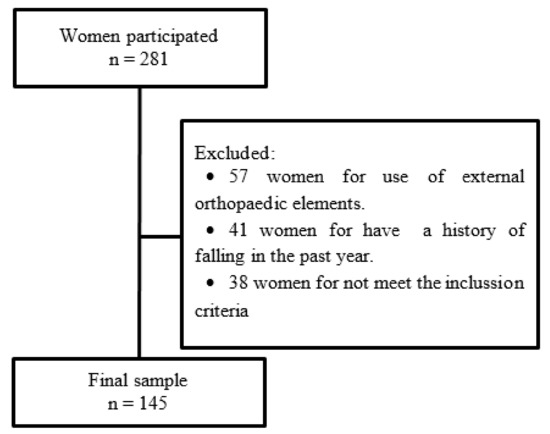