Water Conflicts: From Ancient to Modern Times and in the Future
Previous Article in Journal

Sustainability of Underground Hydro-Technologies: From Ancient to Modern Times and toward the Future

Egyptian and Greek Water Cultures and Hydro-Technologies in Ancient Times

Vasileios A. Tzanakakis
4 and

Egyptian and Greek ancient civilizations prevailed in eastern Mediterranean since prehistoric times. The Egyptian civilization is thought to have been begun in about 3150 BC until 31 BC. For the ancient Greek civilization, it started in the period of Minoan (ca. 3200 BC) up to the ending of the Hellenistic era. There are various parallels and dissimilarities between both civilizations. They co-existed during a certain timeframe (from ca. 2000 to ca. 146 BC); however, they were in two different geographic areas. Both civilizations were massive traders, subsequently, they deeply influenced the regional civilizations which have developed in that region. Various scientific and technological principles were established by both civilizations through their long histories. Water management was one of these major technologies. Accordingly, they have significantly influenced the ancient world’s hydro-technologies. In this review, a comparison of water culture issues and hydro-structures was adopted through the extended history of the ancient Egyptians and Greeks. The specific objectives of the work are to study the parallel historical cultures and hydro-technologies, assessing similarities and differences, and to analyze their progress since primitive times. The tools adopted for the research include visits to historical aeras and museums, comments, consultations, correlation and exhibitions available in the cyberspace. Review results herein showed that dams and canals were constructed in ancient Egypt to manage the flood of the Nile river and develop irrigation systems from ca. 6000 BC. In the second millennium BC, Minoans managed the flow of the streams via two dams, to protect arable land from destruction after intense rainfall and to irrigate their farms. Additional results showed that ancient Egyptians and Greeks invented many devices for lifting water for plant irrigation such as the shadouf, sakia and tympanum and pumps, of which some were already in use in Mesopotamia for irrigating small plots. The ancient Egyptians were the first who discovered the principle and the basis of coagulation (after ca. 1500 BC). They used the alum for accelerating the settlement of the particles. Additionally, the ancient Greeks developed several advanced water treatment technologies since the prehistoric times. To sum up, the study captured many similarities between two civilizations in water technologies. In addition, it confirmed the sustainability and durability of several of those hydro-technologies since they are still in use up to now in many places. View Full-Text
Keywords: Ancient Egypt and Greece; irrigation: water management; water supply; sustainability; wastewater; storm-water management Ancient Egypt and Greece; irrigation: water management; water supply; sustainability; wastewater; storm-water management
►▼ Show Figures 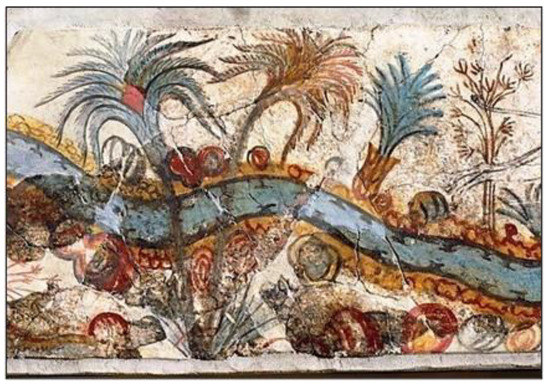