Agritourism and Sustainability: What We Can Learn from a Systematic Literature Review
Next Article in Special Issue

Citizen Science as Part of the Primary School Curriculum: A Case Study of a Technical Day on the Topic of Noise and Health
Previous Article in Journal

Today, insect applications for food and feed are of strong economic, ecological and social interest. Despite their tremendous potential, insects still elicit negative associations in the mindset of Western consumers, which is attributed to a lack of knowledge and scarce opportunities for engagement in this topic. The citizen science project ‘six-legged livestock’ aims to increase the potential of the insect Hermetia illucens (black soldier fly), merging the topics ‘waste re-valorisation’ and ‘protein production’ as a cross-link to circular economy. Workshops were held in four school classes, involving 89 pupils, aged 15 to 18 years old. Making use of organic wastes, participating school classes ran eight rearing systems containing a total of 1800 H. illucens larvae. In the four-week experiments, the pupils monitored larval growth and development. Evidently, the pupils were highly motivated to run their rearing systems and fulfil their working tasks. Furthermore, negative associations with insects, including phobia and scepticism decreased, while excitement for the topic increased after hands-on work with the insects. The presented project may be considered an innovative approach paving the way for the establishment of insects as an important educational tool, since they are still underrepresented in scholarly curricula, despite the public outrage over insect decline. View Full-Text
Keywords: Hermetia illucens; black soldier fly; insect biotechnology; waste valorisation; citizen science Hermetia illucens; black soldier fly; insect biotechnology; waste valorisation; citizen science
►▼ Show Figures 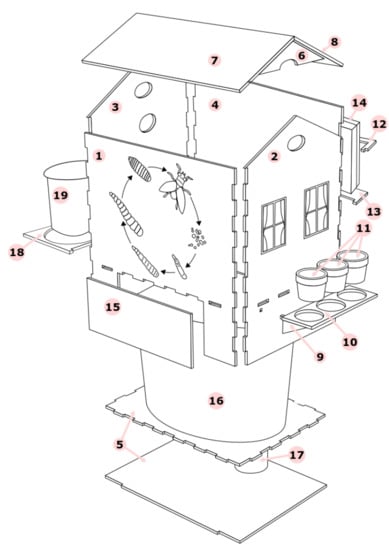