Vegetation Dynamics and Their Response to the Urbanization of the Beijing–Tianjin–Hebei Region, China
Next Article in Special Issue

The Sustainability of Artificial Intelligence: An Urbanistic Viewpoint from the Lens of Smart and Sustainable Cities
Previous Article in Special Issue

Fungi can run feedstock pretreatment to improve the hydrolysis and utilization of recalcitrant lignocellulose-rich biomass during anaerobic digestion (AD). In this study, three fungal strains (Coprinopsis cinerea MUT 6385, Cyclocybe aegerita MUT 5639, Cephalotrichum stemonitis MUT 6326) were inoculated in the non-sterile solid fraction of digestate, with the aim to further (re)use it as a feedstock for AD. The application of fungal pretreatments induced changes in the plant cell wall polymers, and different profiles were observed among strains. Significant increases (p < 0.05) in the cumulative biogas and methane yields with respect to the untreated control were observed. The most effective pretreatment was carried out for 20 days with C. stemonitis, causing the highest hemicellulose, lignin, and cellulose reduction (59.3%, 9.6%, and 8.2%, respectively); the cumulative biogas and methane production showed a 182% and 214% increase, respectively, compared to the untreated control. The increase in AD yields was ascribable both to the addition of fungal biomass, which acted as an organic feedstock, and to the lignocellulose transformation due to fungal activity during pretreatments. The developed technologies have the potential to enhance the anaerobic degradability of solid digestate and untap its biogas potential for a further digestion step, thus allowing an improvement in the environmental and economic sustainability of the AD process and the better management of its by-products. View Full-Text
Keywords: digestate; solid fractions (SFDs); lignocellulose; pretreatment; fungi; biogas digestate; solid fractions (SFDs); lignocellulose; pretreatment; fungi; biogas
►▼ Show Figures 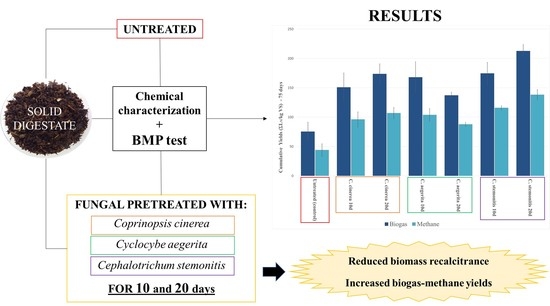