Sensor placement for health monitoring considers the sensor’s optimal placement during daily leakage. After an earthquake, the key node user of the WDN plays a decisive role in disaster relief and water use for victims. Therefore, for protecting people’s lives, it is necessary to evaluate the important nodes of WDNs before earthquakes. Thus, we proposed an evaluation system of disaster prevention impact factors for important node users of WDNs. The nodal leakage can reflect the strength of the nodal water transport function after an earthquake. In addition, considering that the locations of the nodes belong to different levels of disaster prevention emergency support objects, such as municipal emergency command centers, fire control centers, special service fire stations, and central evacuation sites, we thought that the minimum guarantee levels of these emergency protection objects can directly reflect the important position and influence degree of the nodes in a WDN after an earthquake. In terms of topology, the betweenness of a node indicates the importance of the node in the network. Therefore, from three aspects: water shortage, earthquake emergency prevention and topology, the evaluation system for node users’ impact factors in a WDN was constructed (Figure 2).

A graph can be represented by Equation (4) [28]: where V is a non-empty vertex set, and E is the edge set.
A graph is uniquely determined by the association between its vertices and edges, and also by the adjacency between its vertices. The matrix A = A(G) = (aij)n×n is called the adjacency matrix of graph G, where aij is used to represent the number of edges between vertex vi and vertex vj, which may be 0,1.
According to the adjacency matrix of a graph, the betweenness of a graph can be calculated. The betweenness is divided into two types: node betweenness and edge betweenness. The minimum path between node i and node j in the network will pass through some nodes; if a node k is passed by many shortest paths, it means that the node k is very important in the network. The importance or influence of node k can be expressed by the node betweenness, which is defined as: where Bk is the betweenness of node k, d(i,j) is the shortest path numbers between node i and node j, and d(i,j)k is the minimum number of paths between node i and node j passing through node k.

Figure 4 shows a water distribution model based on actual data from a region in China [29], which has 53 nodes and 78 pipelines. Node 50 is a reservoir; node 51, node 52, and node 53 are water source nodes; and the total hydraulic heads are 76.95 m, 74.31 m, 83.58 m and 81.98 m, respectively. We assumed that pipes with a diameter greater than 600 mm are riveted steel pipes, while pipes with a diameter less than 600 mm are rubber sealed cast iron. It needs to be mentioned that all methods were based on Matlab software, and the hydraulic calculation was called epanet2.dll. For the basic data of the WDN, see [29]:
Based on the hydraulic analysis, the nodal pressure sensitivity model was used to obtain the sensitivity matrix, and the extreme value processing method was used to normalize the node pressure sensitivity matrix. Xunjian Wang, Zengyi Wang [30] suggested that the setting of the WDN monitoring points should be about of the total number of nodes, and the number of monitoring points of a large pipe network is smaller than that of a small pipe network. Therefore, the ratio of the monitoring points number in this paper to the total number of nodes was selected as 1/7, that is, the number of monitoring points is 7.

According to the table of seismic intensity in China (GB/t 17742-2008) [31], we chose the peak ground velocity (PGV) of the IX seismic intensity to calculate the average repair rate, RR, in which the average repair rate of pipelines with diameter greater than 600 mm is 0.0690, and that of pipelines with diameter less than 600 mm is 0.1254. The PDD post-earthquake hydraulic analysis model was used to simulate a total of 25 times, and all nodes satisfied the water requirements in the sixth, 10th, 12th, 19th and 20th simulations. Therefore, when calculating the water shortage rate, we did not consider the results of the above five simulations. The remaining 20 simulation results of the node average shortage rate value are shown in Figure 5.

We assumed the emergency guarantee level of the node in this paper (Figure 6), and we analyzed the node user impact factor values of the WDN according to the node users’ impact factor evaluation system proposed in the above section.
The nodes with an emergency protection level score of 3 or more are mainly concentrated in the eastern, northeastern, western and northwestern regions of the city (Figure 6). The monitoring sensors should be placed as much as possible in these areas for better monitoring.

After calculation, the betweenness values of each node were obtained, as shown in Table 2.

The node water shortage rate, the node emergency support level score and the node betweenness value were used as the impact factor indicators. The parameters of each node and the relative influence value were calculated by Matlab software programming, and the relative influence value of each node is normalized. The weight values of the node impact factor are shown in Figure 7.
Figure 7 shows that the darker the node color, the higher the weight of the node impact factor, and the more important the node. The weight values of the node users’ impact factor reflect the post-earthquake functional importance of the node. The nodes with relatively high impact factor weights were node 19, node 25, node 24, node 23, node 22, node 8, node 34 and node 41. These nodes are very crucial for the shelter of residents after an earthquake and the rescue of secondary disasters, which should be protected.

4.2.2. Sensor Placement for Disaster Prevention in WDNs for Important Users

According to the classification of the monitoring domain and the comprehensive sensitivity of nodes, the sensitivity threshold is set as 0.85, so that we obtain the sensor placement nodes, which are node 44, node 14, node 23, node 10, node 32, node 20 and node 6. MapInfo software was used to draw the final placement diagram, as shown in Figure 8.

4.3. Sensor Placement in WDNs Based on Traditional Models

In traditional sensor placement, clustering algorithms are usually used to classify monitoring points based on the sensitivity matrix. Clustering centers are used as monitoring points where sensors are placed and corresponding categories are monitoring areas. The sensitivity curves of some nodes are shown in Figure 9, and the pedigree clustering tree is shown in Figure 10. It should be noted that the fuzzifier parameter of the fuzzy C-means clustering method was 2, and the membership values are shown in Table 5. The membership degree of the dynamic classification method was determined by the entropy weight method.
In this paper, we used eight methods for sensor placement in WDNs, and the sensor placements by the eight methods are shown in Table 6. In addition to the four clustering algorithms used before, the node correlation coefficient method, the effective independence method, the improved Fisher information matrix maximization criterion and the impact ranking method were also used. The idea of voting was used to integrate the monitoring information as well as to fuse the consistency of various algorithms. The node numbers in parentheses indicate the nodes strongly related to the front nodes, which can also be used as monitoring points for the sensor installation.
Finally, based on the idea of voting, we carried out a statistical analysis of sensor placement nodes in Table 6, selected the top 10 nodes as the alternative monitoring nodes, and the placement on the basis of the division of monitoring areas is shown in Figure 11.
According to the hydraulic data of the WDN, it can be seen that pressure value of node 32 is the lowest, which is 19.32 m under the standard working condition, and the second lowest nodal pressure value is node 10, which is 20.13 m. The next lowest is node 41, for which the pressure value is 20.15 m. These three nodes are in a relatively low water pressure. The water demand of node 11 is the second lowest, at 97.2 m3/h. Comparing the hydraulic information, we found that the nodes with lower pressure and water requirement are more sensitive to the changes of pressure and water requirement caused by leakage. The monitoring sensors should be placed at the end of pipework, which is more sensitive to pressure, as far as possible, which is consistent with that described in Jianwen Liang [31].

The sensor placement of the two models is as follows:
In terms of the node location, Figure 7 and Figure 10 show that the sensors placed in node 40 and node 11 in the traditional model are close to node 44 and node 14, respectively, in the model presented herein. Node 10, node 32 and node 20 are selected as monitoring placements in both the two models. This means that the above three nodes are still suitable for monitoring the pressure changes of pipework as sensor placements, considering both sensitivity and node users’ impact factors.
In terms of node importance, the monitoring points node 40, node 11, node 41 and node 5 in the traditional model become node 44, node 14, node 23 and node 5 in the model presented herein. From Figure 6, it can be seen that the sensor placements based on the model presented herein are located at or near the nodes with high impact factors, indicating that the placements are more important in post-earthquake emergency support, network topology and water shortage rate.

In this paper, the post-earthquake function importance and network importance of nodes are introduced into the placement of monitoring points to realize the layout of disaster prevention monitoring points in WDNs, with good compatibility with health monitoring layout. Three-way decision clustering methods are introduced to comprehensively consider the decision value of integrating multiple clustering methods, which can be used as a way to consider the influence of different factors in sensor placement. The work in this paper has formed a technical tool for sensor placement for disaster prevention, which is of great significance for urban post-earthquake emergencies. 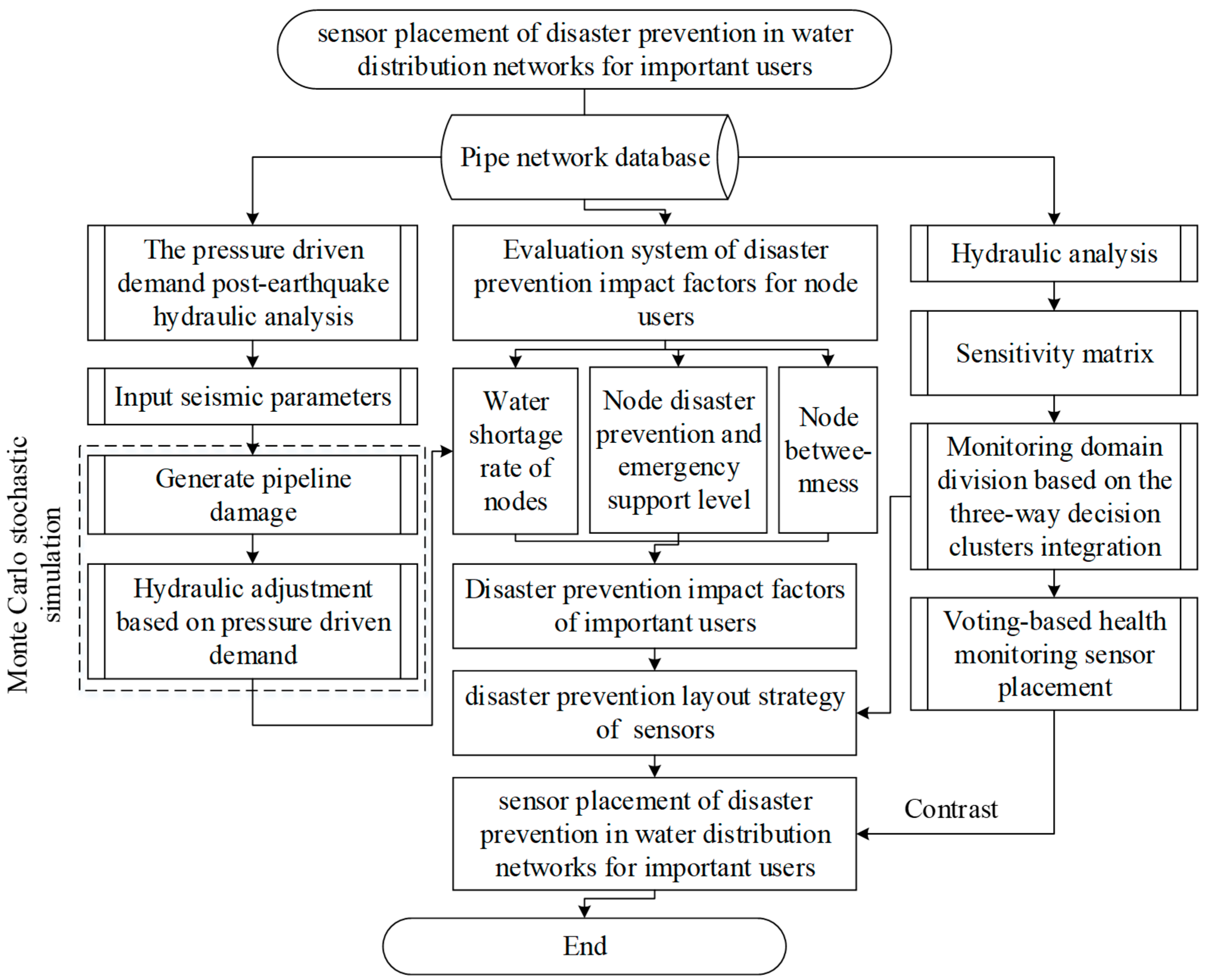 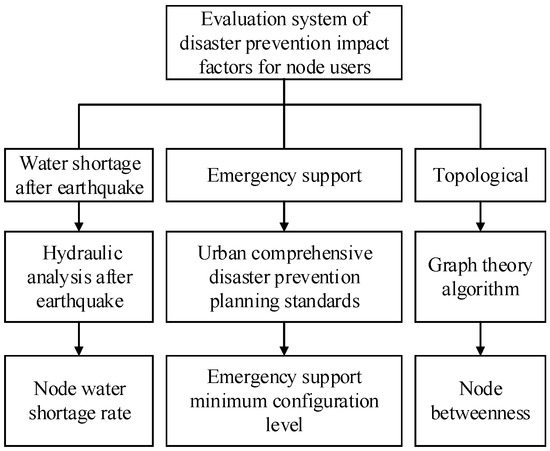 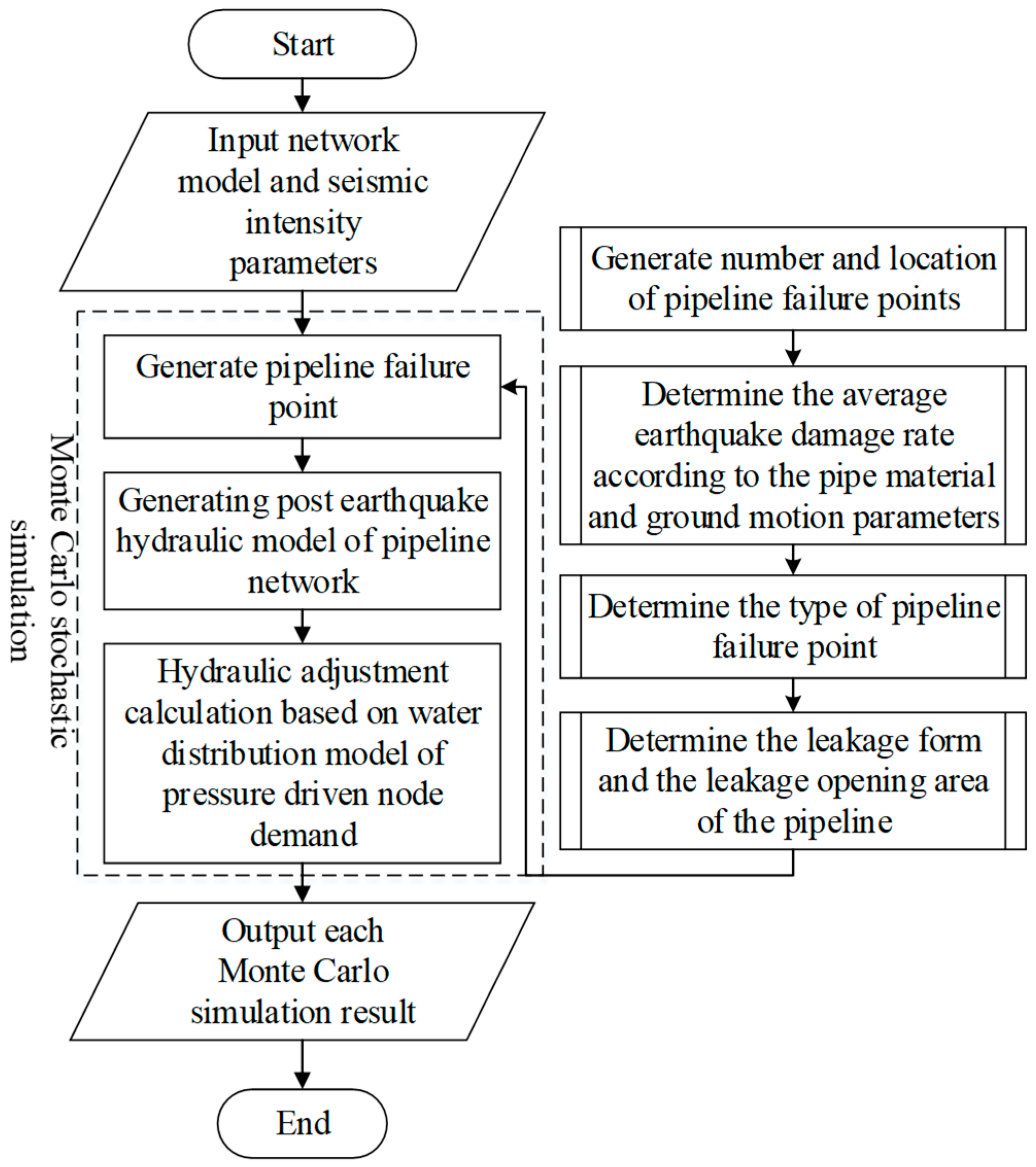 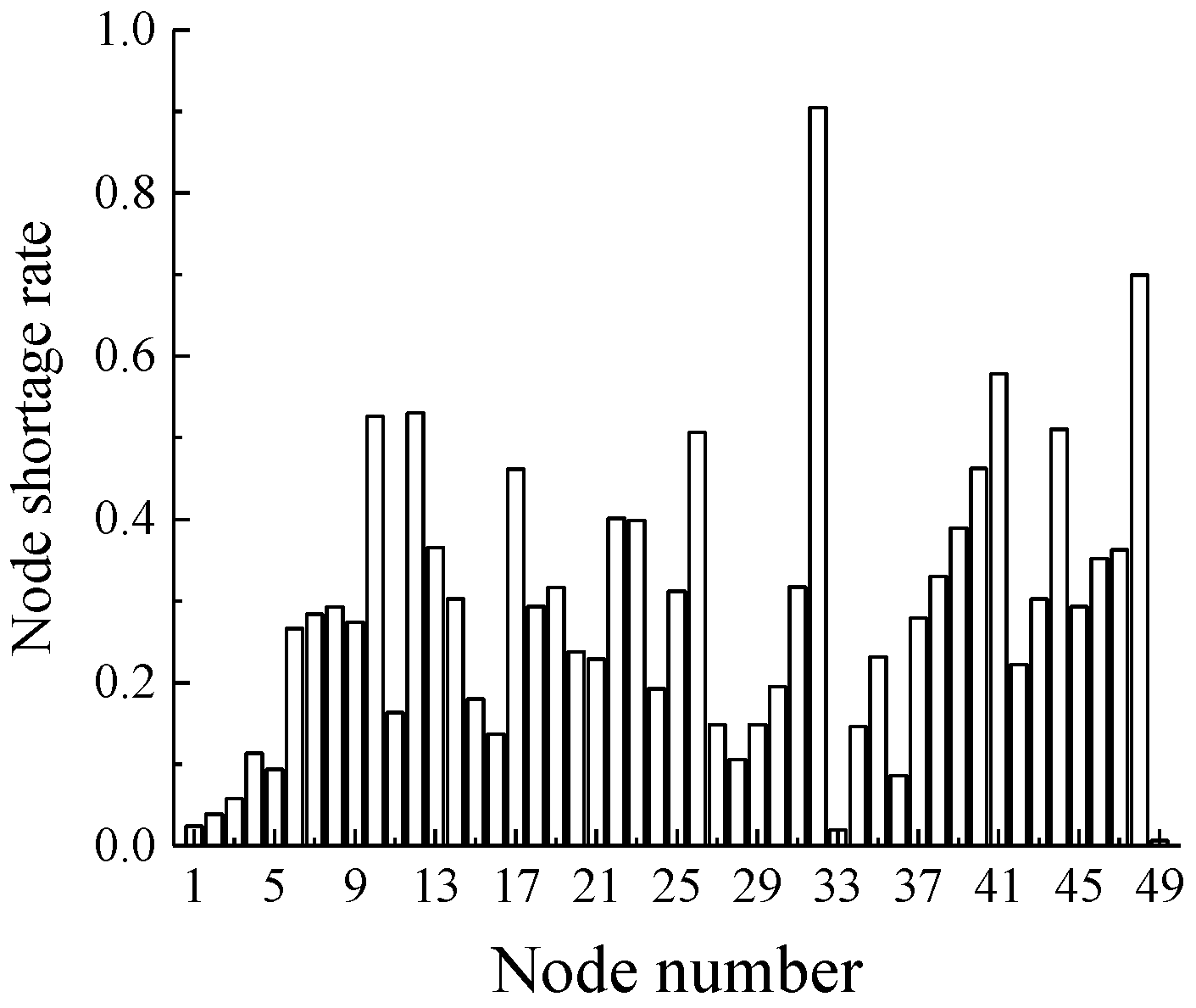 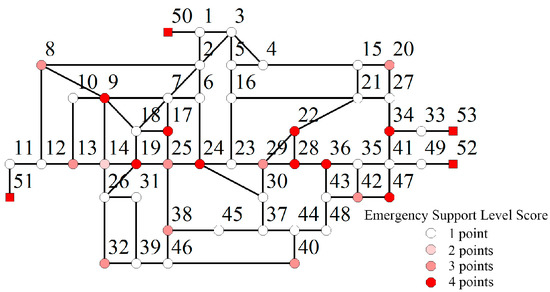 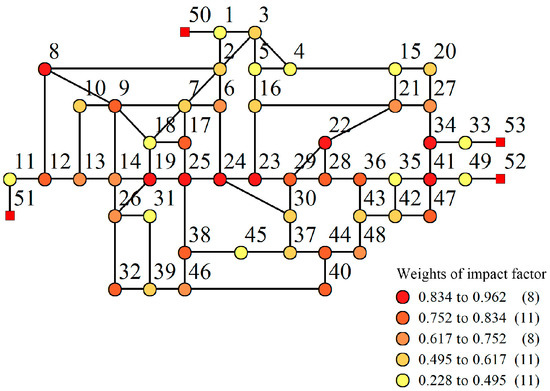 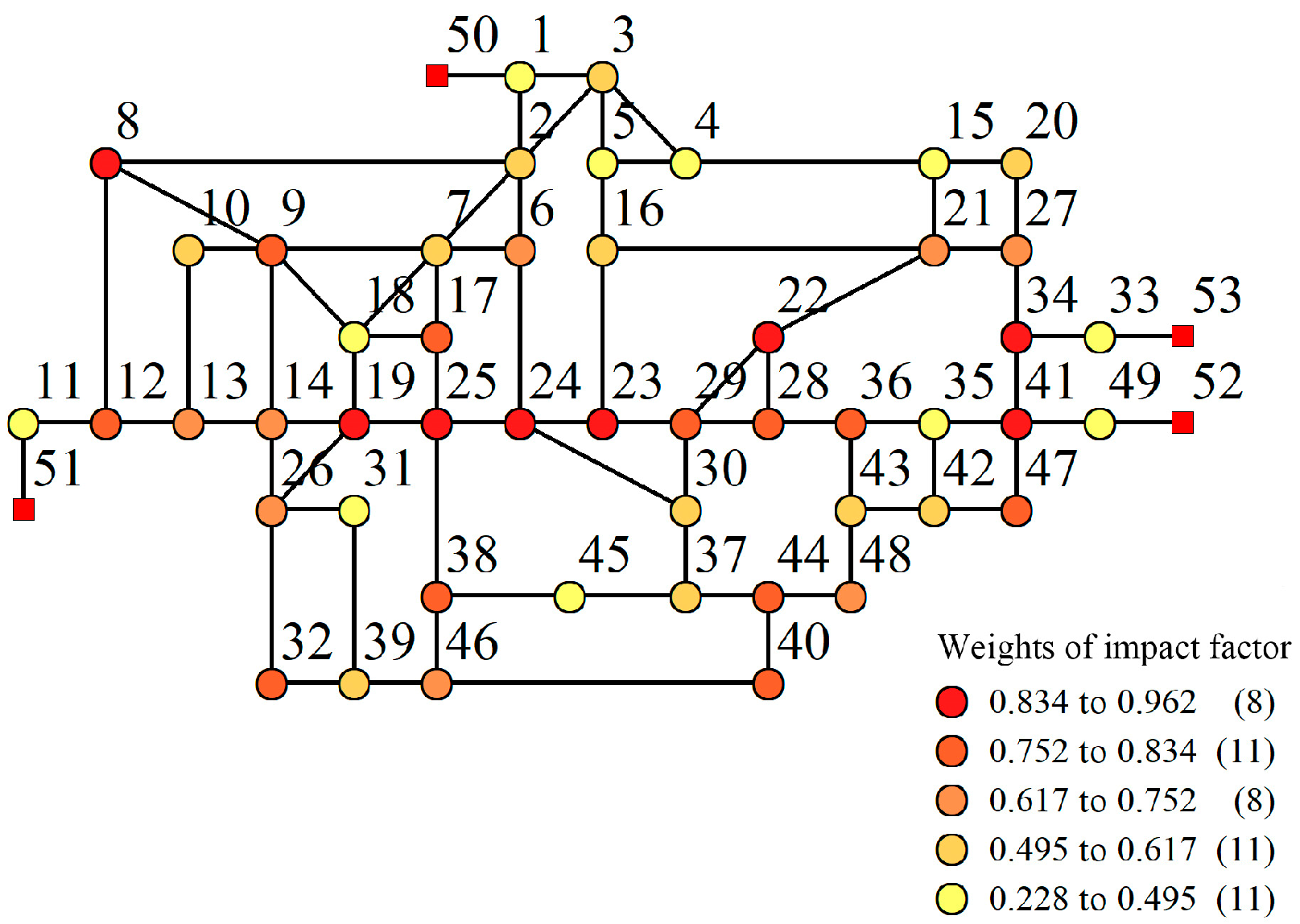 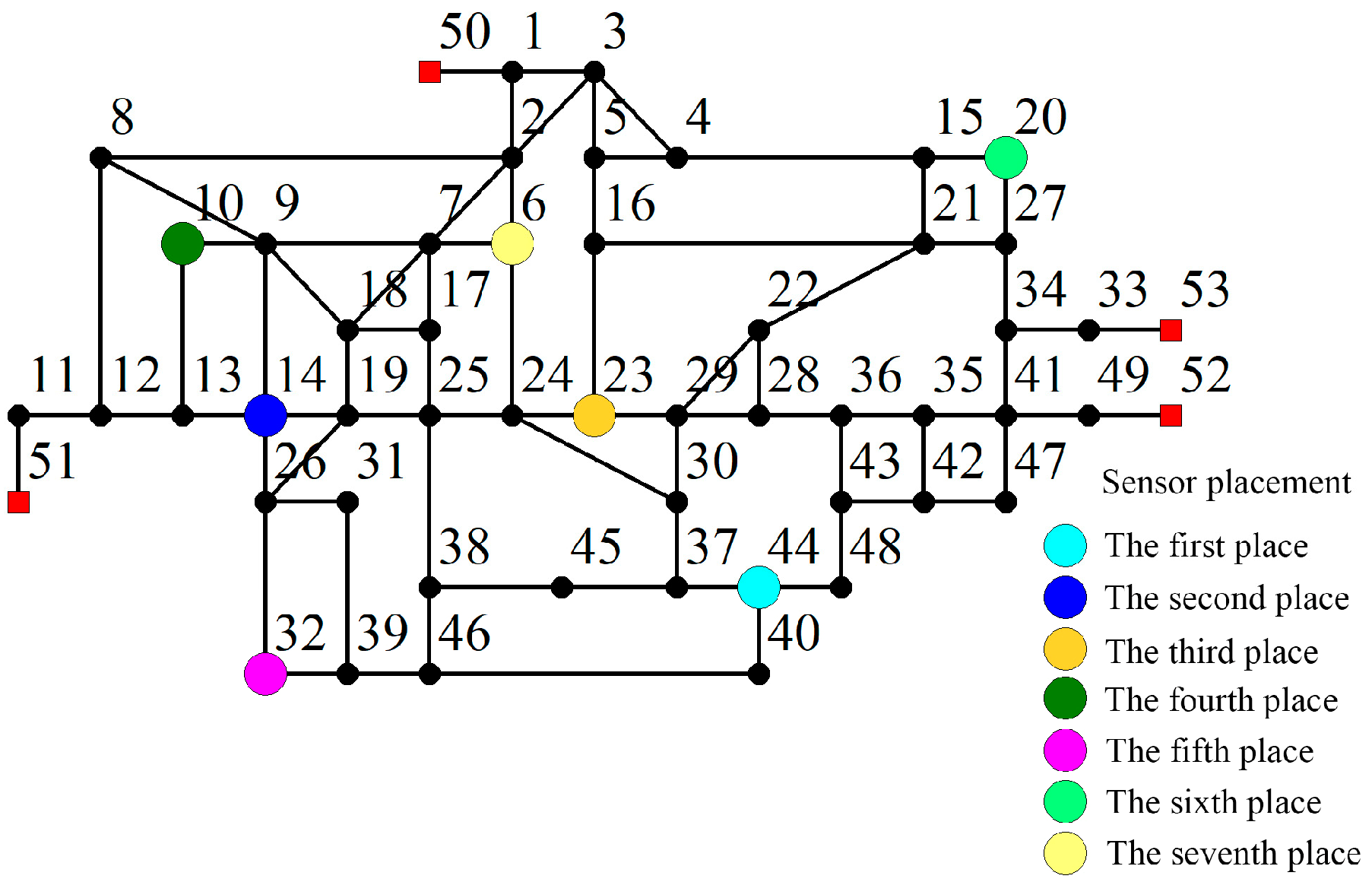 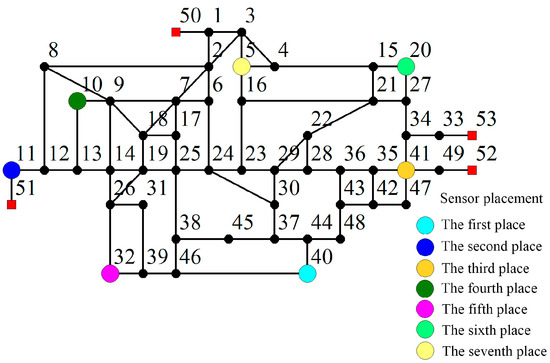 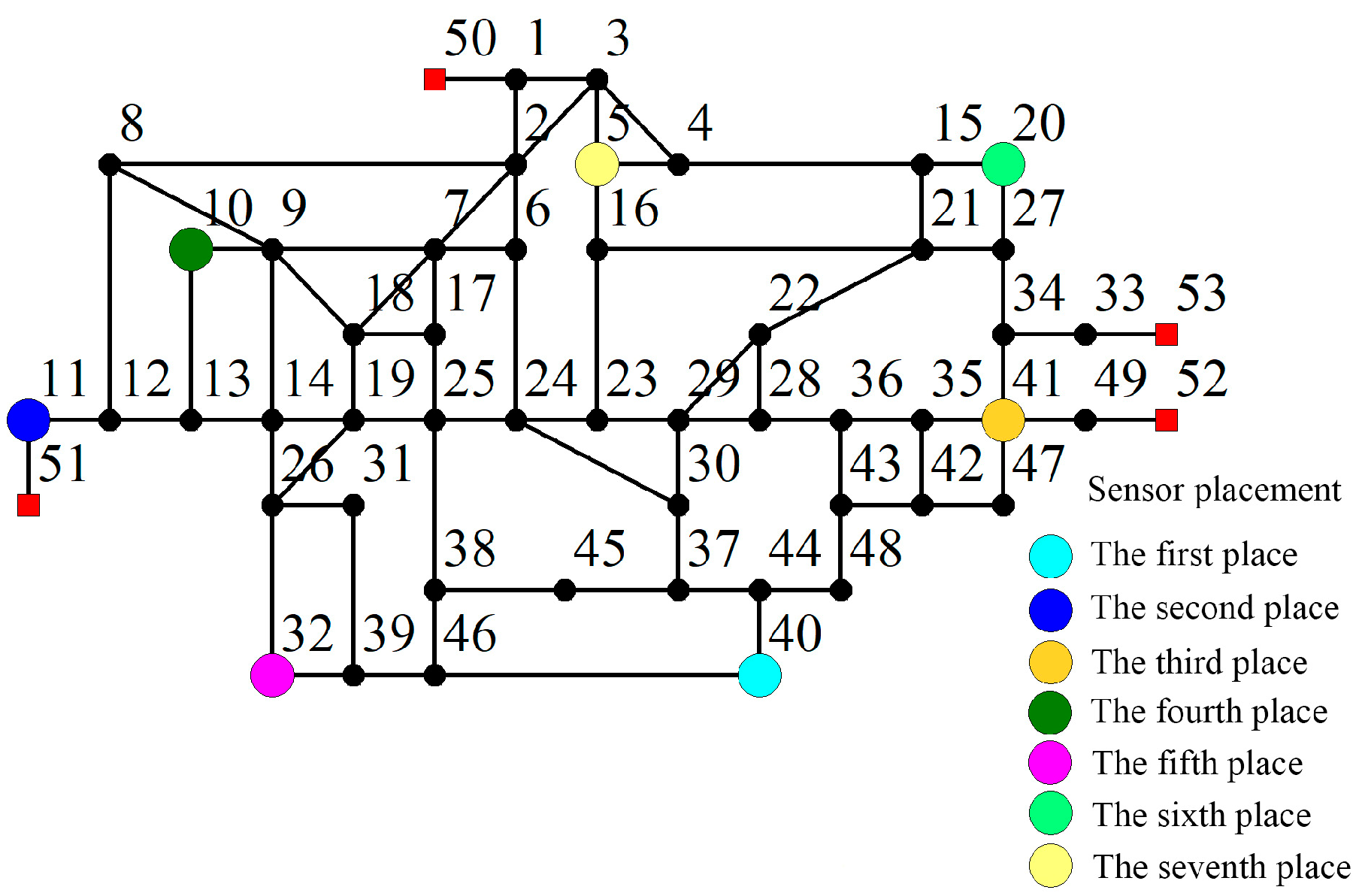 Table 6. Comparison of various methods.
Table 6. Comparison of various methods.
© 2020 by the authors. Licensee MDPI, Basel, Switzerland. This article is an open access article distributed under the terms and conditions of the Creative Commons Attribution (CC BY) license (http://creativecommons.org/licenses/by/4.0/).
We use cookies on our website to ensure you get the best experience. Read more about our cookies here.
Accept
We have just recently launched a new version of our website. Help us to further improve by taking part in this short 5 minute survey here. here.
Never show this again