Spatiotemporal Patterns and Drivers of the Surface Urban Heat Island in 36 Major Cities in China: A Comparison of Two Different Methods for Delineating Rural Areas

Urbanization intensity (UI) affects habitat quality (HQ) by changing land patterns, nutrient conditions, management, etc. Therefore, there is a need for studies on the relationship between UI and HQ and quantification of separate urbanization impacts on HQ. In this study, the relationship between HQ and UI and the direct and indirect impacts of urbanization on HQ were analyzed for the Yangtze River Delta Urban Agglomeration (YRDUA) from 1995 to 2010. The results indicated that the regional relationship between HQ and UI was nonlinear and negative, with inflection points where urbanization reached 20% and 80%. Furthermore, depending on different urbanization impacts, the relationship types generally changed from a steady decrease to stable in different cities. Negative indirect impacts accelerate habitat degradation, while positive impacts partially offset habitat degradation caused by land conversion. The average offset extent was approximately 28.23%, 17.41%, 22.94%, and 16.18% in 1995, 2000, 2005, and 2010, respectively. Moreover, the dependency of urbanization impacts on human demand in different urbanization stages was also demonstrated. The increasing demand for urban land has exacerbated the threat to ecological areas, but awareness about the need to protect ecological conditions began to strengthen after the antagonistic stage of urbanization. View Full-Text
Keywords: urbanization; habitat quality; DMSP-OLS; spatiotemporal analysis; Yangtze River Delta Urban Agglomeration urbanization; habitat quality; DMSP-OLS; spatiotemporal analysis; Yangtze River Delta Urban Agglomeration
►▼ Show Figures 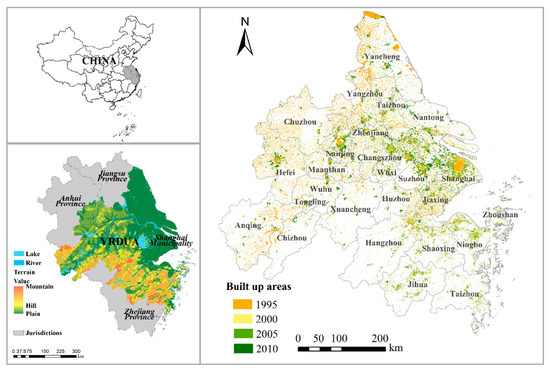