This study aimed to identify the interactional relationships between maturation (biological age (BA)) and lean mass on strength development in young athletes from different sports. Using a cross-sectional study design, a sample of 64 young athletes (rowers, swimmers, jiu-jitsu, volleyball, soccer and tennis players) of both sexes (13.6 ± 1.17 years) were recruited. Body composition was assessed using dual energy bone densitometry with X-ray source (DEXA). Strength of upper limbs (ULS), force hand grip (HG), vertical jump (VJ) and jump against movement (CMJ) were recorded. BA was estimated from anthropometrics. BA relationships were identified with upper limb strength in all athletes, and with the lower limb strength of tennis players, only (p < 0.05). An interaction effect between lean mass and BA was found (η2p = 0.753), as was a local effect within the regression models (ƒ2 ≥ 0.33). Athletes with a higher concentration of lean mass had superior upper and lower limb strength (p < 0.05). Lean mass showed a local effect (ƒ2) greater than that associated with BA. Although maturation is related to strength development, the strength of the relationship is mitigated by the accrual of lean mass. Specifically, the local effect of lean mass on muscle strength is broader than that of maturation, especially for lower limb strength. View Full-Text
Keywords: young athletes; lean mass; maturation; performance sensory motor; sports; puberty young athletes; lean mass; maturation; performance sensory motor; sports; puberty
►▼ Show Figures 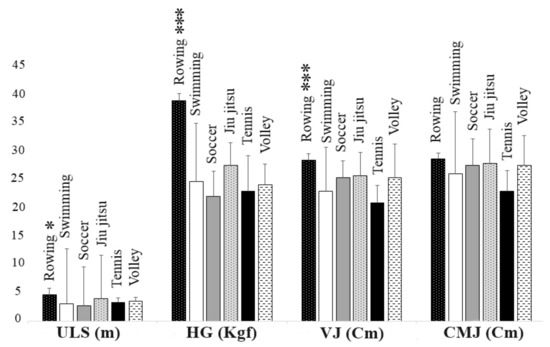