The Role of Social Farming in the Socio-Economic Development of Highly Marginal Regions: An Investigation in Calabria
Previous Article in Journal

The paper proposes a new hybrid method based on cuckoo search (CSA) and sunflower optimization (SFO) approach (called HCSA-SFO) for improving the performance of solutions in the optimization power system operation problem. In the power system, the optimal power flow (OPF) problem is one of the important factors which usually minimizes total cost and total active power losses while satisfying all constraints of the output power of generators, the voltage at buses, power flow on branches, the capacity of capacitor banks and steps of transformer taps. HCSA-SFO utilizes the mutation and selection mechanism in the SFO algorithm to replace the Lévy flights function in CSA. Hence, this makes HCSA-SFO avoid the fixed step size in the CSA from that can reduce run time and improve the quality of solution for the HCSA-SFO algorithm in the OPF problem. The proposed hybrid technique is simulated on the 30-buses and 118-buses systems. The obtained simulation results from the suggested technique are compared to many other approaches. The result comparisons in different cases showed that the suggested HCSA-SFO can achieve a better result than many other optimization approaches. Therefore, the suggested HCSA-SFO is also an effective approach for dealing with the OPF problem. View Full-Text
Keywords: sunflower optimization; optimal power flow; total fuel cost; cuckoo search algorithm; total active power losses sunflower optimization; optimal power flow; total fuel cost; cuckoo search algorithm; total active power losses
►▼ Show Figures 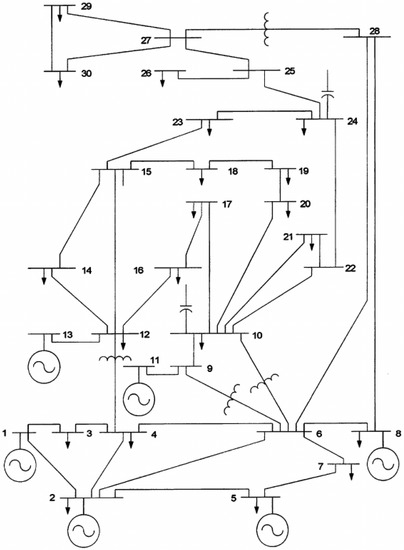