Comprehensive Approach to Relevant and Reliable Reporting in Europe: A Dream Impossible?
Next Article in Special Issue

Linking of Traditional Food and Tourism. The Best Pork of Wielkopolska—Culinary Tourist Trail: A Case Study
Previous Article in Journal

Territorial Clusters of Farmers’ Interest in Diversification in Poland: Geospatial Location and Characteristics

:
With a gradual shift towards sustainable rural development, farm diversification has recently gained importance in EU policy. To increase the efficiency of policies aiming to support farm diversification, it is of crucial importance to know the factors motivating farmers to diversify. The purpose of this paper was to research spatial determinants of farm diversification in Poland by identifying and describing territorial clusters of rural areas (municipalities), in which farmers’ interest in diversification is above or below the national average. The Moran’s global spatial autocorrelation coefficient was used to test for spatial autocorrelation, while the local Moran’s statistic served to group together municipalities which exhibited a level of the frequency of applying for diversification support above/below the average value for the entire territory covered by the analysis. Furthermore, the clusters were described with the use of synthetic characteristics of the Polish agriculture and rural areas. The existence and characteristics of clusters suggest that the policy toward diversification in Poland favors areas of better developed agricultural structures. In clusters with structural disadvantages where diversification is most needed, the program’s performance has been very modest. However, our analysis also revealed the existence of outlier municipalities which demonstrated outstanding performance in applying for diversification funds despite structural disadvantages. These observations suggest that the farmers’ interest in diversification may be driven by a number of additional factors beyond a structural disadvantage alone.
Keywords:
spatial determinants; territorial clusters; farm diversification; rural development

The applied method allows to extract municipality clusters exhibiting statistically different frequencies of applying for the diversification measure (Moran’s global statistic 0.488, p<0.001). Table 2 shows the numbers of municipalities which form clusters at the above-average application frequency for diversification funds (High-High); municipalities which form clusters at below-average application (Low-Low), High-Low and Low-High outliers and out-of-cluster municipalities (at medium levels of the coefficient of frequency), calculated using the Moran’s local statistic. Figure 1 presents the location of the clusters identified.
Slightly more than 30% of the municipalities covered by this analysis were allocated to clusters, including 213 (9.9%) to the cluster exhibiting a high frequency of applying for the measure ‘diversification into non-agricultural activities’ (High-High), and 399 (18.6%) to the cluster with a frequency below the national average (Low-Low). Outliers represented only approximately 2% of municipalities, including 25 which had below-average application frequencies for diversification funds, but were adjacent to municipalities at higher levels (Low-High outliers). Only 12 municipalities exhibited much higher frequency coefficients than the surrounding units (High-Low outliers). The out-of-cluster group was composed of municipalities at medium levels of the coefficient.
The largest cluster of municipalities demonstrating high frequency coefficients is located in the central-west part of Poland. This part of the country is home to 12 out of 25 Low-High outliers. Other High-High clusters are mostly found in the north-east of Poland, which is also the location of 10 Low-High outliers. The clusters with below-average frequency coefficients (Low-Low) are mostly located in the south-east of Poland. This part of the country also has 9 out of 12 High-Low outliers.
Table 3 presents the factor scores characteristic of municipality groups at the above-average application frequency for the diversification measure (the HH cluster and HL outliers), and of municipalities at levels below the national average (the LL cluster and LH outliers). The results demonstrate that factor scores significantly differed between the municipality groups covered by the analysis. Figure 2 provides visualization of the factor scores for the municipality groups covered.
The Kruskall–Wallis test yielded statistically significant results for all factor scores (at p < 0.0001). The results of the Dunn–Bonferroni post-hoc test show that all of the groups identified statistically significantly differ from each other in five factors: farm structures, infrastructure, organic agriculture, animal production, and demography.
The highest values of the factor representing farm structures were recorded in members of the High group (median score 0.28, upper quartile 0.95). The lowest values of that factor were found in members of the Low group (median -0.42, upper quartile -0.08). The variables covered by that factor (variables are listed in the method’s description) relate to the quality of agrarian structure. Therefore, the findings suggest that the measure ‘diversification into non-agricultural activities’ was statistically more frequently applied by farmers in municipalities with more favorable structural conditions for farming such as larger average farm area, a larger average sown area, a greater share of industrial crops, and production performance.
Similar conclusions can be drawn when comparing the animal production factor. In this case, the highest factor score was found in the High group (with a median of 1.2), whereas the lowest levels were recorded in members of the Low group (a median of −0.77). The above suggests that regions with a high coefficient of frequency of applying for the measure ‘diversification into non-agricultural activities’ exhibited a relatively good level of animal production compared to the rest of the country. Compared to other groups, municipalities of the High group also exhibited higher levels of the demography factor which reflects an above-average demographic structure.
Conversely, the infrastructure indicators reached higher levels in the Low group (municipalities with lower coefficients of frequency of applying for diversification funds) than in other territories. This indicator reflects the level of technical infrastructure (gas supply network and sewage network density) and social infrastructure (density of schools, etc.) in rural areas. High values of the indicator are recorded in municipalities with relatively high population density, which are primarily situated in the southern part of Poland.
In the High group, the organic production indicator was significantly lower compared to other groups. The analysis suggests that the High and Low groups significantly differ in the level of agricultural land greening as well. That indicator is lower in municipalities with a lower frequency of applying for the measure ‘diversification into non-agricultural activities’ than in the other two groups of municipalities covered by this analysis. Another difference between the High and Low group was in the entrepreneurship indicator, with higher levels being recorded in the High group compared to the Low group.
The identification of municipality groups at high and low levels of the application frequency for the diversification measure also enabled us to assess the impact of farms’ proximity to urban areas on their likelihood to diversify the activities in Poland. To do this, the share of rural and rural-urban municipalities was compared between the High, Low, and out-of-cluster groups (Figure 3). These results show that in the High group, residents of rural-urban municipalities applied for the diversification measure significantly more often compared to other municipality groups (the share of rural-urban municipalities is 37% in the High group and 25% in the Low group). 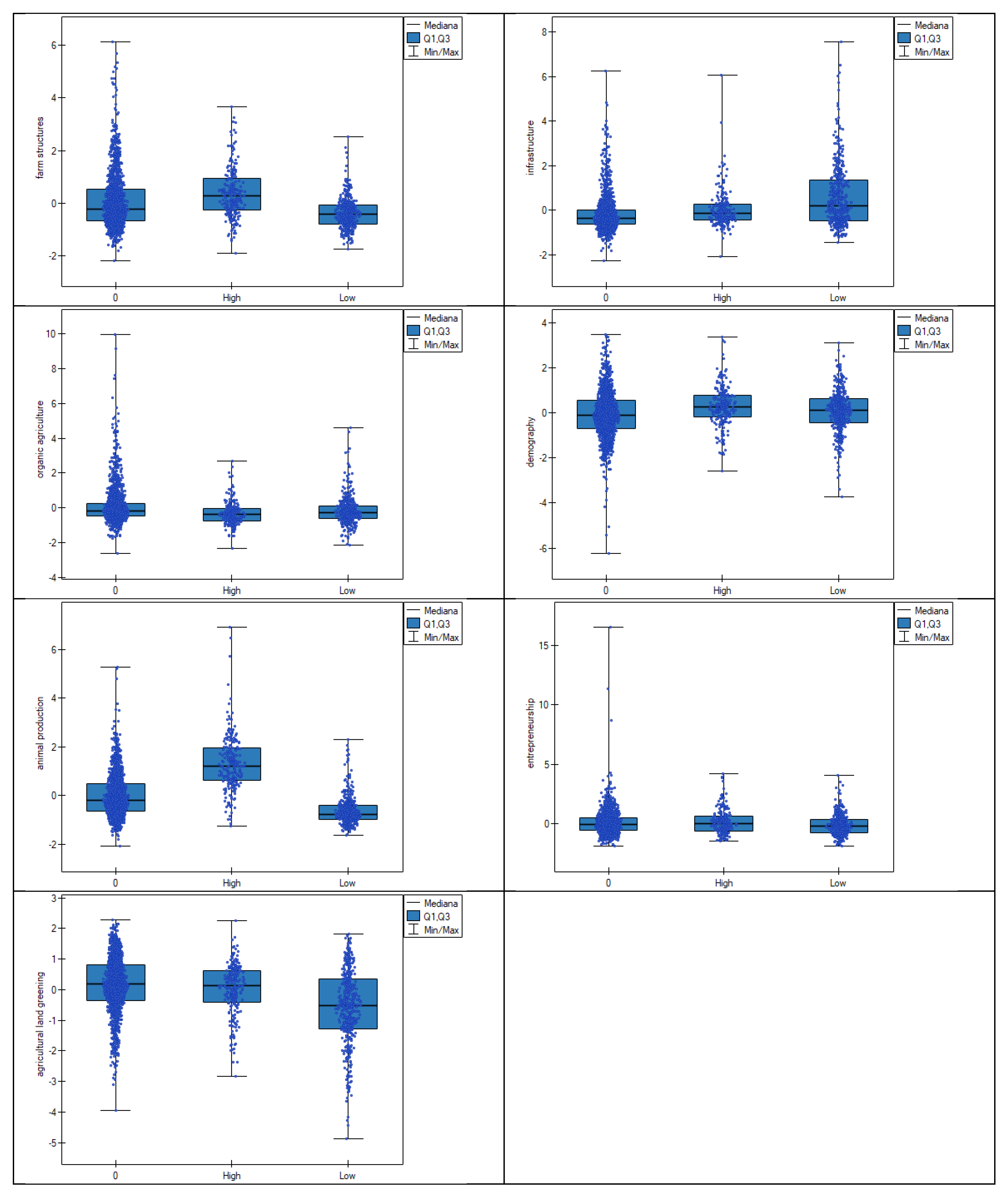