The Effect of Participation Effort on CSR Participation Intention: The Moderating Role of Construal Level on Consumer Perception of Warm Glow and Perceived Costs
Previous Article in Special Issue

In this paper, an application of the Jaya Algorithm (JA) is presented, to develop an operation optimization model for the Mula reservoir, located on the upper Godavari Basin, in India. The mentioned algorithm is a relatively new optimization technique, which is algorithm-specific and parameterless. In JA, there is no need for algorithm-specific parameter tuning, unlike with other heuristic techniques. To test its applicability, the model performance has been compared with that of other models for hypothetical four reservoir system studies available in the literature. Simulations for hypothetical four reservoir system have proven that JA is a better solution for a number of Function Evaluations when compared with the results obtained by means of other evolutionary methods such as Genetic Algorithms, Particle Swarm Optimization, Elitist Mutated Particle Swarm Optimization, and Weed Optimization Algorithm models reported in previous studies. Simulations have been carried out for real time operation of the Mula reservoir, and have revealed its superior performance when comparing the water releases proposed by it and the ones proposed by existing policy. Hence, from the two case studies presented, it can be concluded that the JA has potential in the field of reservoir operation and can be further explored to operation optimization of existing multi-reservoir system, with lower computations. View Full-Text
Keywords: Jaya algorithm; reservoir operation; optimization Jaya algorithm; reservoir operation; optimization
►▼ Show Figures 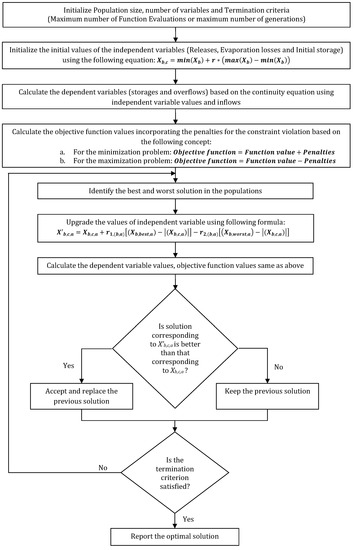