Multi-Party Agroforestry: Emergent Approaches to Trees and Tenure on Farms in the Midwest USA
Previous Article in Special Issue

Severe droughts cause substantial damage to different socio-economic sectors, and even Finland, which has abundant water resources, is not immune to their impacts. To assess the implications of a severe drought in Finland, we carried out a national scale drought impact analysis. Firstly, we simulated water levels and discharges during the severe drought of 1939–1942 (the reference drought) in present-day Finland with a hydrological model. Secondly, we estimated how climate change would alter droughts. Thirdly, we assessed the impact of drought on key water use sectors, with a focus on hydropower and water supply. The results indicate that the long-lasting reference drought caused the discharges to decrease at most by 80% compared to the average annual minimum discharges. The water levels generally fell to the lowest levels in the largest lakes in Central and South-Eastern Finland. Climate change scenarios project on average a small decrease in the lowest water levels during droughts. Severe drought would have a significant impact on water-related sectors, reducing water supply and hydropower production. In this way drought is a risk multiplier for the water–energy–food security nexus. We suggest that the resilience to droughts could be improved with region-specific drought management plans and by including droughts in existing regional preparedness exercises. View Full-Text
Keywords: drought; hydrological modeling; water security; climate change; groundwater; water–energy–food security nexus; preparedness; Finland drought; hydrological modeling; water security; climate change; groundwater; water–energy–food security nexus; preparedness; Finland
►▼ Show Figures 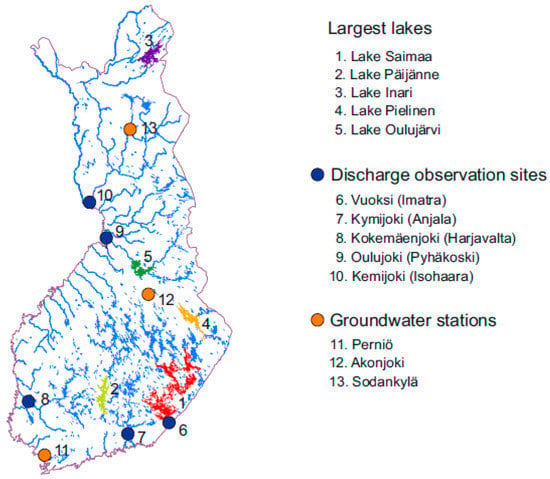