Rethinking the Utility of Public Bicycles: The Development and Challenges of Station-Less Bike Sharing in China
Next Article in Special Issue

Searching for the Various Effects of Subprograms in Official Development Assistance on Human Development across 15 Asian Countries: Panel Regression and Fuzzy Set Approaches

Over the past few decades, workers’ remittances have grown to become one of the largest sources of financial flows to developing countries (defined as low income and middle-income economies), often dwarfing other widely studied sources such as private capital and official aid flows [1]. Links between migration and development have been researched with increasing intensity since the 1990s and a new paradigmatic approach—the ‘migration and development nexus’—has appeared. Various reasons lead to the increasing interest in migration and development. Namely, among other things, the absolute growth of international migrants to industrialised countries [2,3], an increasing amount of remittances in the last two decades [4,5] and their impacts on growth [6,7,8,9,10]. Many authors focused on questions dealing with the contribution of development aid to economic growth, poverty reduction and migration from developing countries [11,12,13,14]. Some authors focus on the impact of sustainable social and economic development in less-developed migrant-sending countries on migrant flows from those countries to developed countries [15] and the problems related to the ageing population in Europe and other developed countries. Disillusion from the small effectiveness of traditional development tools such as development aid for more than the last six decades and other financial flows such as foreign direct investments are also factors, among others.
According to Reference [16], scientists are facing serious difficulties in understanding the complex relationships between migration and sustainable economic development. These problems include the inconclusive nature of the empirical evidence that is too narrowly defined based on case studies. For this reason, they recommend focusing on the assessment of existing research evidence and prioritising studies with a larger scale, especially in comparative studies. These studies should also attempt to focus on comparing the importance of individual development interventions and other financial flows that have an impact on economic development such as development aid and remittances.
The main objective of this paper is to analyse the long-term stability of development aid and remittances (personal remittances and personal transfers received) and their impact on sustainable economic growth in developing countries. The primary research questions are:
To achieve our objectives, we use linear regression model methods to investigate the relationship between sustainable (long-term) economic growth and financial flows and to evaluate the overall stability of these flows. We use two data sets based on the World Development Indicators database [17]. The first data set is an unbalanced data set of 159 countries (for years 1970 through 2017) with corresponding indicators of remittances and development aid. The second dataset is a balanced dataset of 57 countries (for years 1991 to 2017, which is the most recent year in this database). The selected countries see no gaps in received development aid, official development assistance (ODA) and remittances in the given period. Our econometric approach and dealing with the data differ from other papers focused on this topic. We try to study the overall stability and tendencies in the development aid and remittance inflow and the possible structural changes in their impact on economic growth. Most of the studies aim at one or more countries or smaller subsamples and the corresponding results are thus not general. Moreover, the problem of stability (or volatility) is rarely mentioned and we try to fill this existing gap in the literature. Using the relatively big sample of countries allows us to prove the overall importance of remittances and development aid in sustainable economic growth and to check the robustness of these results concerning the investigated time period. Our results and proposed methodology may thus contribute significantly to the extant literature.

2. The Concept of Development Aid and Remittances

For our paper, we use the term development aid as the sum of the net official development assistance and official aid (OA) received. Development aid has been one of the fundamental tools for development interventions over the last six decades. According to the World Bank definition [18]: “net official development assistance (ODA) consists of disbursements of loans made on concessional terms (net of repayments of principal) and grants by official agencies of the members of the Development Assistance Committee (DAC), by multilateral institutions and by non-DAC countries to promote economic development and welfare in countries and territories in the DAC list of ODA recipients. It includes loans with a grant element of at least 25 per cent (calculated at a rate of discount of 10 per cent).” Net official aid flowed from official donors to countries and territories in part II of the DAC list of recipients. Part II of the DAC List was abolished in 2005. The collection of data on official aid and other resource flows to Part II countries thus ended with the data from 2004. Part II was a selection of more advanced countries in Central and Eastern Europe, countries of the former Soviet Union and certain advanced developing countries and territories; and official aid was provided under terms and conditions like those for ODA [18].
For measuring and classifying ODA and other resource flows originating from DAC members of the Organisation for Economic Co-operation and Development (OECD) member countries, ‘the DAC list of ODA recipients’ is usually reviewed every three years. Figure 1 depicts the long-term development of aid flow. It shows a rising trend in the amount of ODA received by the countries, although the relative share of the net ODA seems to be stable overall from the 1990s onward.
In this paper, we understand the term remittance flows as the sum of personal remittances received. Personal remittances comprise several different transaction formats—personal transfers, compensation of employees and capital transfers between households. Data are made up to the sum of two items defined in the sixth edition of the IMF’s Balance of Payments Manual: personal transfers and compensation of employees [17]. Personal transfers consist of all current transfers in cash or in kind made or received by resident households to or from non-resident households. Personal transfers thus include all current transfers between resident and non-resident individuals. Compensation of employees refers to the income of border, seasonal and other short-term workers who are employed in an economy where they are not residents and of residents employed by non-resident entities [19]. In the list of standard components of the balance of payments accounts, “workers’ remittances” have been replaced by “personal transfers” (for more details, see Reference [20]). Figure 2 shows the rising trend of remittances flows.
The remittances flows are mostly directed into the low middle-income and upper-middle-income countries. Comparing the low volumes of the remittances in the 1970s with the corresponding volumes in the 2000s forces us to investigate their impact on economic growth separately for all decades. On the other hand, the unbalanced development of the remittances flows in the low-income economies requires a focus on the stability of these flows. These issues are fully considered within our approach.

This research was funded by funding for specific research at the Masaryk University, Faculty of Economics and Administration, project MUNI/A/0972/2018, and the project “Smart Migration in the Czech Republic” supported by the Technological Agency of the Czech Republic, project TL01000468 (http://smartmigration.cz/). 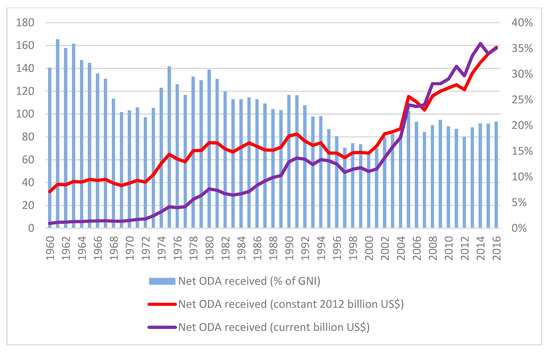 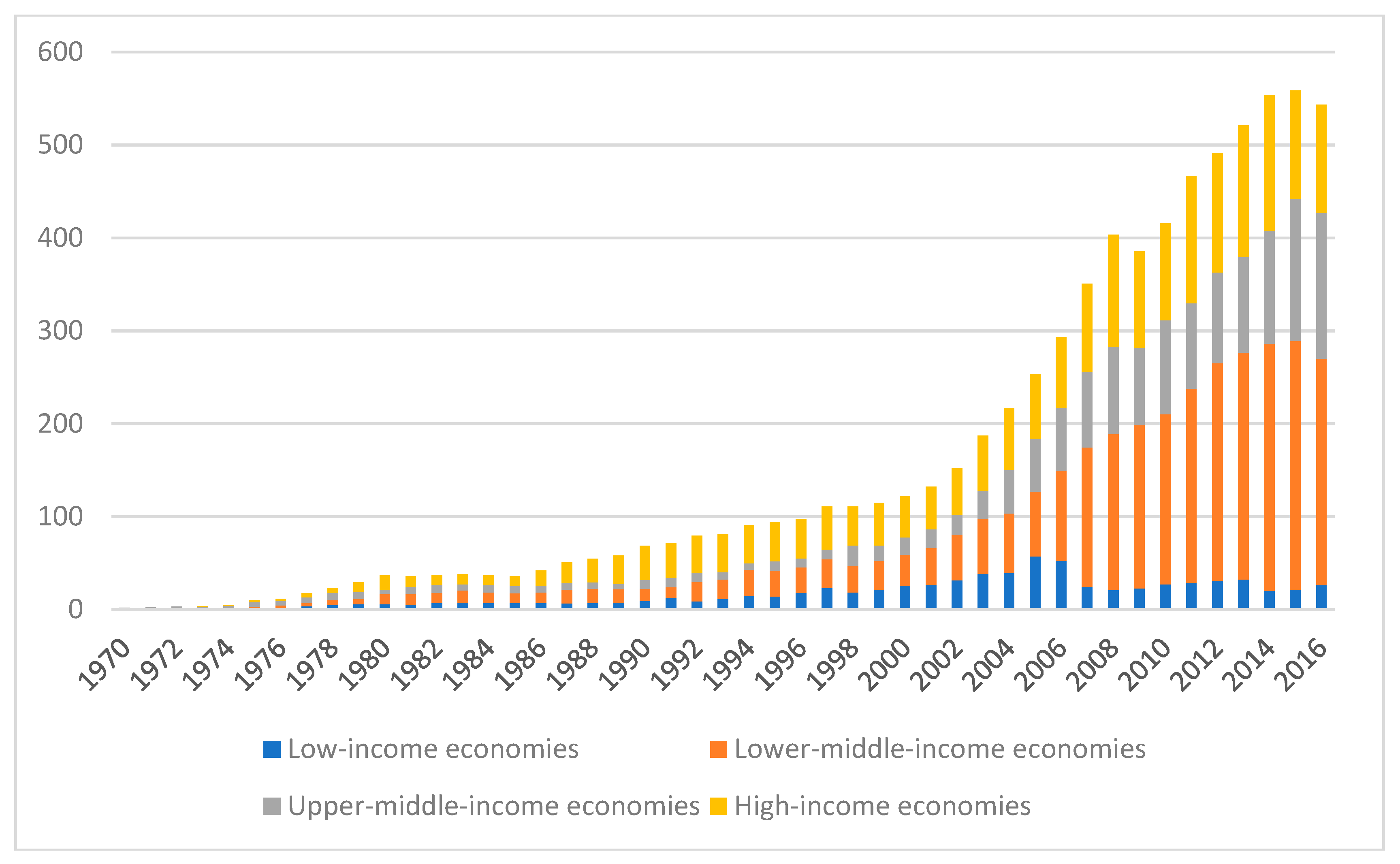 Table 6. Estimation results for factors influencing GDP growth (robustness check).
Table 6. Estimation results for factors influencing GDP growth (robustness check).
Notes: ***, **, * denote parameter significance at the 10%, 5% and 1% level of significance, respectively. No asterisk indicates significance at the 20% level of significance. LI = lower income dummy, LMI = lower middle-income dummy, UMI = upper middle-income dummy. SE are robust standard errors of parameters estimates (heteroskedasticity-consistent standard errors). O/G = ODA to GNI ratio (%), R/G = remittances to GDP ratio (%), FDI/G = foreign direct investments to GDP ratio (%), INV/G = gross fixed capital formation to GDP ratio (%), GOV/G = government spending to GDP ratio (%), EXP/G = exports of goods and services to GDP ratio (%). N denotes the number of available observations, R2 is the uncentered coefficient of determination (due to the absence of the intercept).
© 2019 by the authors. Licensee MDPI, Basel, Switzerland. This article is an open access article distributed under the terms and conditions of the Creative Commons Attribution (CC BY) license (http://creativecommons.org/licenses/by/4.0/).
We use cookies on our website to ensure you get the best experience. Read more about our cookies here.
Accept
We have just recently launched a new version of our website. Help us to further improve by taking part in this short 5 minute survey here. here.
Never show this again