We Can’t Keep Meating Like This: Attitudes towards Vegetarian and Vegan Diets in the United Kingdom

Animal agriculture is implicated as a major cause of greenhouse gas emissions, animal suffering and public health problems. This survey asked 1000 UK meat-eaters about their beliefs about vegetarian and vegan diets, and their intended consumption of meat and animal products one month in the future. One in six intended to reduce their meat consumption in the next month, and 14% intended to reduce their consumption of animal products. The majority agreed that vegetarian and vegan diets are ethical, good for the environment and healthy. The majority also agreed that both vegetarianism and veganism were socially acceptable. However, there were three consistent negative beliefs about vegetarian and vegan diets: that they are difficult, that they are not enjoyable and that they are expensive. Moreover, perceptions of vegan diets were significantly more negative than perceptions of vegetarian diets on most aspects. Significant differences in perceptions of each diet were observed between genders and by age. It is argued that most meat-eaters agree with the ethical and environmental arguments in favour of vegetarianism/veganism but do not follow these diets because of practical reasons relating to taste, price and convenience. New alternatives to animal products are discussed as a possible way to address these practical barriers. Finally, the case is made for more research on developing high-quality, low-cost and widely available animal product alternatives. View Full-Text
Keywords: vegetarian; vegan; attitudes; consumer behaviour; meat reduction vegetarian; vegan; attitudes; consumer behaviour; meat reduction
►▼ Show Figures 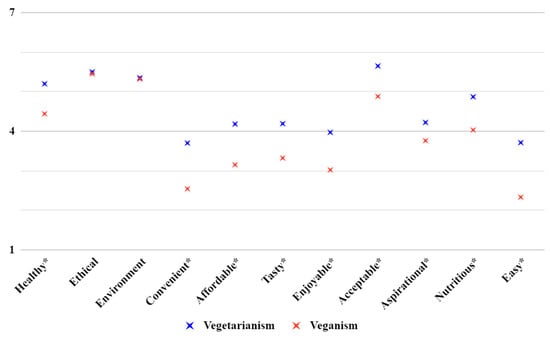 Bryant, C.J. We Can’t Keep Meating Like This: Attitudes towards Vegetarian and Vegan Diets in the United Kingdom. Sustainability 2019, 11, 6844.


Bryant CJ. We Can’t Keep Meating Like This: Attitudes towards Vegetarian and Vegan Diets in the United Kingdom. Sustainability. 2019; 11(23):6844.


Bryant, Christopher J. 2019. "We Can’t Keep Meating Like This: Attitudes towards Vegetarian and Vegan Diets in the United Kingdom." Sustainability 11, no. 23: 6844.