Carbon Footprint as a Lever for Sustained Competitive Strategy in Developing a Smart Oenology: Evidence from an Exploratory Study in Italy
Previous Article in Journal

The Territorial Defence Force in Disaster Response in Poland: Civil-Military Collaboration during a State of Emergency
Previous Article in Special Issue

International trade shifts production of a large amount of carbon dioxide (CO2) emissions embodied in traded goods from the importing country to the exporting country. The European Union (EU) plays a prominent role in the flow of international-related emissions as it accounts for the second largest share of global exports and imports of goods. Consumption-based accountings (CBA) emerged as alternative to the traditional emission inventories based on the Intergovernmental Panel on Climate Change (IPCC) guidelines. According to the IPCC criteria, countries where products are consumed take no responsibility for the emissions produced by exporter countries, thus neglecting the emissions embodied in trade. By taking this aspect into account, CBA are considered of great importance in revealing emissions attributed to the final consumer. Using a CBA approach, this paper evaluates the impact of international trade in the EU in terms of CO2 emissions, looking both at the internal trade flows within the EU-28 and at the external trade flows between the EU and the rest of the world during the period 2012–2015. We find that the EU is a net importer of emissions as its emissions due to consumption exceed those due to production. In particular, in 2015 the ratio between import- and export-embodied emissions was more than 3:1 for the EU-28 that imported 1317 Mt CO2 from the rest of the world (mainly from China and Russia) while exporting only 424 Mt CO2. Concerning emissions flows among EU countries, Germany represents the largest importer, followed by the UK. To get a deeper understanding on possible environmental implications of Brexit on UK emission responsibilities, the paper also advances a few hypotheses on how trade flows could change based on the existing trade patterns of the UK. Data analysis shows that a 10% shift of UK imports from EU partners to its main non-EU trading partners (India, China, and US) would increase its emission responsibility by 5%. The increase in UK emission responsibility would more than double (+11%) in case of a 30% shift of UK imports. Similar results would apply if UK replaced its current EU partners with its main Commonwealth trading partners as a result of Brexit. View Full-Text
Keywords: GHG emissions; consumption-based accounting; national carbon intensity; emission responsibility; Europe; Brexit GHG emissions; consumption-based accounting; national carbon intensity; emission responsibility; Europe; Brexit
►▼ Show Figures 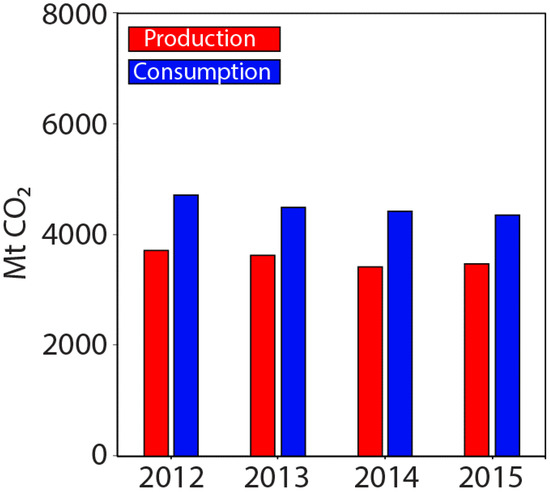