Realizing the Circular Economy for Sanitation: Assessing Enabling Conditions and Barriers to the Commercialization of Human Excreta Derived Fertilizer in Haiti and Kenya
Next Article in Special Issue

:
Alien chromosome introgressions can be used to introduce beneficial traits from one species into another. However, exploitation of the introgressions in breeding requires proper transmission of introgressed segments to consecutive generations. In xFestulolium hybrids chromosomes of Festuca and Lolium readily pair and recombine. This opens a way for introgression of traits (e.g., abiotic and biotic stress resistance) from Festuca into elite Lolium cultivars. However, retention of Festuca chromatin in xFestulolium is uncertain as several studies indicated its gradual elimination over generations of sexual reproduction. Here we investigated genome composition in two subsequent generations of four introgression xFestulolium (F. pratensis × L. multiflorum) cultivars using genomic in situ hybridization. We observed about 27–32% elimination of Festuca chromatin in a single round of multiplication. At this pace, Festuca chromatin would be completely eliminated in about four generations of seed multiplication. On the other hand, we observed that it is possible to increase the proportion of Festuca chromatin in the cultivars by proper selection of mating plants. Nevertheless, once selection is relaxed, the first round of the seed multiplication reverts the genome composition back to the Lolium type. Thus, it seems that amphiploid forms of xFestulolium with relatively stable hybrid genomes may be more promising material for future breeding than introgression lines.
Keywords:
genome dominance; ryegrass; fescue; hybrid; grass; recombination

Interspecific or even intergeneric hybridization followed by whole genome duplication has been one of the main mechanisms of plant speciation, including many crop progenitors [1]. Besides ancient allopolyploids, such as wheat and cotton, new interspecific hybrids are produced in breeding programs to widen the gene pool of the crop species, to introgress beneficial traits from wild relatives to elite cultivars, or to combine agriculturally important traits from two different species (or genera). Merging the genomes from different species may disturb their organization and cooperation in the hybrid nucleus. In a majority of allopolyploids, the two parental genomes retain their integrity and their chromosomes (homoeologues) do not recombine via homoeologous chromosome pairing. This is usually controlled by specific genes or loci. Among them the Ph1 (Pairing homoeologous 1) system of wheat is the best known. Only plants with mutated, deleted or suppressed forms of meiotic pairing control genes enable incorporation of chromosome segments via homoeologous recombination [2,3]. However, in hybrids between some species, pairing of homoeologous chromosomes does take place and may be quite frequent. Van der Meer and De Vries reported successful hybridization between bulb onion (Allium cepa L.) and its wild relative A. roylei Stearn with the aim to introgress downy mildew resistance into elite cultivars of the bulb onion [4]. Similarly, chromosomes of ryegrass and fescue pair with each other in xFestulolium (Festuca × Lolium hybrids) [5]. The pairing results in extensive interspecies homoeologous recombination and chromosome reshuffling, and combined with reproduction by outcrossing, brings about enormous genetic diversity where each plant of a population has a different combination of segments of parental genomes. This creates an opportunity for breeders to introgress potentially any chromosomal segment from one species into the other. In this fashion many forms of xFestulolium were developed, including chromosome substitution and recombination lines [6]. Barnes et al. developed diploid L. perenne with introgression of F. pratensis chromatin in the distal part of the short arm of chromosome 3. Plants with this introgression were extremely drought resistant [7]. Similarly, Kosmala et al. reported introgression of freezing tolerance from F. pratensis into diploid L. multiflorum [8] and drought resistance was introduced from fescues into ryegrasses in several other breeding programs [9,10,11]. In general, the crossability of species from both genera enables the combination of high yield, palatability, digestibility and nutrition from ryegrasses and stress related traits (drought and freezing tolerance, winter hardiness, crown rust resistance) from fescues in xFestulolium hybrids [6].
On the other hand, promiscuous pairing of homoeologous chromosomes enables potential elimination of one of the parental genomes in successive sexual generations. In our previous study, we found that Lolium chromosomes were more abundant than those of Festuca in all screened amphiploid xFestulolium cultivars [12]. In some cultivars, the Festuca chromatin was completely eliminated. Zwierzykowski et al. observed gradual replacement of Festuca chromosomes by those of Lolium between F1 and F6 generations of L. multiflorum × F. pratensis hybrids [13]. One may speculate that the shift was due to the selection of ‘Lolium-type’ plants. Italian ryegrass, in comparison to meadow fescue, has a higher germination rate, faster seed germination and more rapid plant establishment from seed. Therefore, the same authors repeated the analysis on consecutive generations of L. multiflorum × F. pratensis hybrids with random selection of progenies. Interestingly, they observed a similar trend of Lolium dominance, even though the shift was somewhat meager [14]. Genome dominance in interspecific hybrids is not unique to xFestulolium. Van Heusden et al. showed that in a hybrid of onion, one of the genomes (A. roylei) also appeared to be predominating: The frequency of roylei alleles in the F2 population was on average 56% (vs. 44% of cepa alleles) [15].
The mechanism(s) underlying genome dominance at the chromosomal level is so far unknown, and several scenarios have been hypothesized including gametic competition, pollination effects, selection for seed yield and germination, and meiotic drive in females [16]. Besides these, other aspects such as asynchrony of the meiotic rhythms may play a role, as evident in Brachiaria ruziziensis × B. brizantha hybrids [17]. The continuity of Festuca-chromatin elimination in advanced breeding material is questionable. In our previous work, we analyzed three consecutive generations of three registered amphiploid xFestulolium cultivars [18]. We found that despite high genetic variability within each population, the proportion of parental genomes was relatively stabilized without apparent Festuca-chromatin elimination in subsequent generations. Kubota et al. also did not observe a reduction in the proportion of the Festuca chromatin in successive generations of Japanese xFestulolium cultivars Icarus and Nakei 1 [19]. Similarly, Zwierzykowski et al. found that a shift in genome composition towards one of the parents appeared to reach a plateau between F7 and F8 generations [20]. The outcrossing mode of reproduction, accompanied by the potential Lolium-genome dominance, raised a question of the ability of Festuca chromatin to be transmitted into the subsequent generation(s) in the introgression xFestulolium cultivars, recently popular among grass breeders. To study this, we employed genomic in situ hybridization (GISH) to assess alien chromatin transmission in four cultivars under different management of progeny selection.

We used four chromosome introgression cultivars of xFestulolium (labelled FL1–FL4) originating from the cross of L. multiflorum × F. pratensis. All four were at least in F6 after intergeneric hybridization. To estimate transmission frequencies of individual chromosomes, we used the progeny of tetraploid monosomic substitution lines (2n=4x=28; 27L+1F) developed in our previous study [21].

Mitotic metaphase spreads and GISH were prepared from root tips according to Masoudi-Nejad et al. [22]. Total genomic DNA of F. pratensis was labelled with digoxigenin using DIG-Nick Translation Kit according to manufacturer’s recommendation (Roche Applied Science, Penzberg, Germany) and used as a probe. Total genomic DNA of L. multiflorum was sheared to 200–500-bp fragments by boiling for 45 min and used as blocking DNA. The probe to block ratio was 1:150 with minor variation. Sites of probe hybridization were detected by the Anti-DIG-FITC conjugate (Roche). Chromosomes were counterstained with 1.5 µg/ml 4’,6-diamidino-2-phenylindole (DAPI) in Vectashield antifade solution (Vector Laboratories, Burlingame, CA, USA). Slides were evaluated with Olympus AX70 epifluorescent microscope equipped with a SensiCam B/W camera. ScionImage and Adobe Photoshop software were used for processing of color pictures. At least three metaphase spreads were evaluated for each plant. We counted the number of Festuca and Lolium chromosomes, both with and without homoeologous exchange(s). Centromere identity was used to assign a particular chromosome to one of the two parental genomes. Thus, the chromosome was identified as of Festuca-origin if its centromere was labelled with F. pratensis probe even if the majority of the chromosome consisted of the Lolium chromatin.
The parental generation was designated G1 and the following generation after intercross of G1 was designated G2. In cultivars FL3 and FL4, three types of G2 were analyzed: G2/I, G2/IIa and G2/IIb (Figure 1).

3.1. Cultivars with Higher Proportion of Festuca chromatin (FL1 and FL2)

3.2. Cultivars with Lower Proportions of Festuca chromatin (FL3 and FL4)

Using tetraploid monosomic substitution lines, where one Lolium chromosome was replaced by its Festuca homoeologue, we analyzed the transmission frequency of individual chromosomes. There was a clear variation in the transmission rate among different chromosomes: Chromosome 5F was transmitted to the progeny at only 34% frequency (significantly less than expected 50%), while other chromosomes were transmitted almost regularly (Table 4). However, not a single F. pratensis chromosome was transmitted to the progeny with frequency above the expected 50%. So, besides the more frequently eliminated chromosome 5F, all Festuca chromosomes contribute to the general gradual elimination of the Festuca chromatin from the hybrid genome.

This research was funded by the Czech Science Foundation (grant award 17-13853S) and by the European Regional Development Fund OPVVV project “Plants as a tool for sustainable development” number CZ.02.1.01/0.0/0.0/16_019/0000827 supporting Excellent Research at CRH.

We would like to thank Helena Tvardíková and Radka Tušková for excellent technical support. We express our thank you to Prof. Adam J. Lukaszewski (University of California, Riverside) for his critical reading and valuable comments. 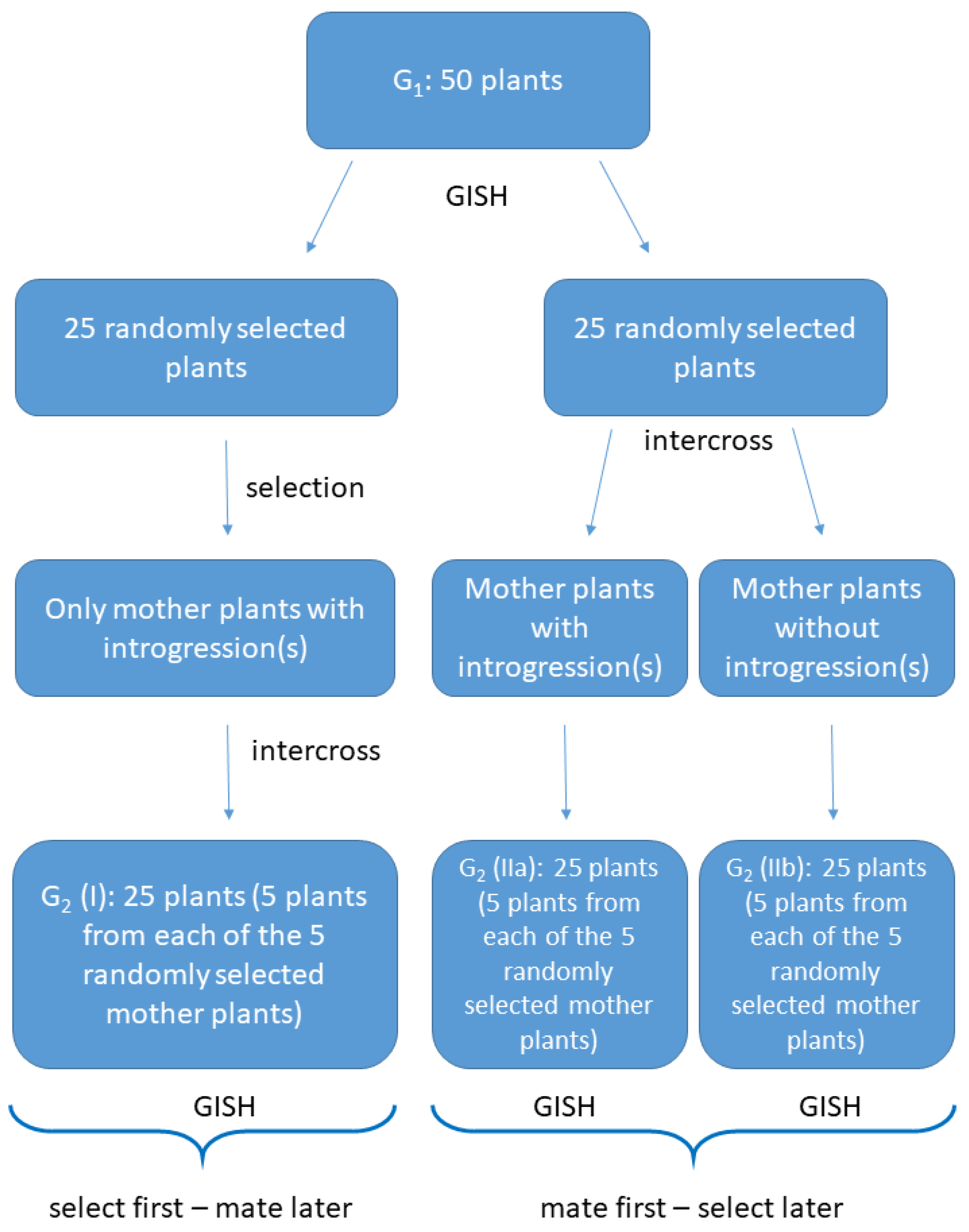