Management Accounting Change as a Sustainable Economic Development Strategy during Pre-Recession and Recession Periods: Evidence from Russia
Next Article in Special Issue

The Segregation of Foreigners in U.S. Mainstream Classrooms
Previous Article in Journal

What Attitudes Toward Refugees Do Future European Teachers Have? A Comparative Analysis between France and Spain

Two hundred and thirty-six teachers of primary and secondary education in the multicultural cities of Ceuta and Melilla participated in the study. They were 27–61 years old with a mean age of 35, and 57.89% were male while 42.10% were female. A sample of 81 teachers from Malaga and 93 from Granada was also collected in order to compare different contexts with different cultural relationships. The study was carried out during the first trimester of the school year (2018–2019). It is the first time that a study of these characteristics has been carried out in border and multicultural cities, so the results cannot be compared with those of previous studies.
In relation to cultural origin, three major groups stand out: European, Berber (cultural group of Riffian origin, Islamic religion and Tamazight mother tongue), and others (teachers whose mother/father are from Europe and mother/father are Berber, as well as Jews and Romani Gypsies). The variables used during the investigation are summarised in Table 1.
Nine teachers were eliminated from the sample, as they did not finish all the responses, thus making a final sample size of 190 for the multicultural context and 174 for the non-multicultural context. Participants completed the survey under the supervision of the researchers.

An original ISS was created and validated in 2000 [22]. The original construct was validated and found to have the same dimensions as those presented by the original authors in other research papers [33,34]. The ISS originally had 24 items and 5 subscales with a Likert scale of 5 points. Included in the subscale is relational engagement, regard for cultural diversity, relational certainty, relational satisfaction, and relational carefulness.
For this research we used a more recent modified and validated version of the ISS [35]; this version was reduced to 15 items without losing its construct validity. According to the author, scores expected from the scale are between 15 and 75 (Appendix A). Higher scores indicated a higher level of intercultural sensitivity. The alpha value of the scale was better than the original scale. Different sociodemographic variables were collected in order to make comparisons between the different groups.

Data were analysed using descriptive, inferential, and multivariate statistics with SPSS 23 and AMOS 23 software. The samples used for comparison do not meet the classic requirements of parametric tests—normality (data have a normal distribution), homogeneity of variances (groups have the same variance), and independence (whether there is independence between two variables or attributes) [36,37].
Nonparametric statistics are used with the aim of providing data robustness [38]. In addition, in cases where the differences are significant, the effect sizes are calculated through Cohen’s d. This allows us to know the strength of the differences and not just to describe them in terms of magnitude [39].
Two kinds of nonparametric tests are carried out. The Mann–Whitney U test allows us to compare two independent groups and does not need a specific distribution [40]. Moreover, it is considered as a nonparametric version of the Student’s t-test. To compare more than two groups, the Kruskal–Wallis H test is used. It is an extended version of the Mann–Whitney U test [40]. Moreover, it is considered a nonparametric version of analysis of variance (ANOVA). To know how and between which groups the differences shown by the H test are found, it is necessary to study the comparisons individually through the Mann–Whitney U test for each possible pair [41]. The latest versions of SPSS simplify this process, showing visually the differences and values obtained by different groups.

Different analyses were carried out to determine the validity of the model—in this case, Cronbach’s alpha (α), Composite Reliability (CR), and Average Extracted Variance (AVE). The results obtained show reliability indices considered acceptable, obtaining for the total of the scale an α value of 0.92. Likewise, there are no problems of convergent validity: AVE > 0.5. The results of the reliability analysis are shown in Table 2.

Intercultural sensitivity is not an instinctive or universal aspect of human behavior. Nowadays, the development of intercultural sensitivity represents a great challenge for educational systems where different cultures coexist [43].
The results obtained show high values of cultural sensitivity among teachers in both cities. Similar results have been obtained in other investigations [29,44]. Within the educational system, teachers obtaining these results are a positive phenomenon. They are responsible for applying and developing the future competences and cultural responsibility of their students [20,45].
Although some significant differences are found depending on the variables analysed, the strength of these differences are low and these cannot be considered as relevant differences. Teachers appear to be open to knowing and relating to people of other cultures—a greater predisposition than has been observed in people of different ages who have experienced a migratory process [46,47].
It has been found in this research that the highest values appear in interaction enjoyment and interaction attentiveness, which means that teachers feel encouraged about interactions with other cultures and think that this interaction is useful. Although, as has been proven, just having an intercultural experience is not a guarantee of improvement in intercultural competence [48].
Although it has been observed in this research that, between the considered multicultural cities (Ceuta and Melilla because of the geographical situation) no significant differences were found in two factors, differences in respect of cultural differences exist between Melilla and Granada, and Ceuta and Malaga. Further, regarding interaction attentiveness, differences are found between Ceuta and Malaga and moreover between Ceuta and Granada, and Melilla and Granada. Thus, the results seem to indicate that context can influence those dimensions [49,50].
The differences found in these cities are mainly due to two phenomena. First, the natural context in which most of these teachers have grown up, where they have been exposed to this type of relationship since childhood, and during their training [51,52]. Second, the specific training they have done. This training has been proven to have positive effects on intercultural relations [53,54].

It has been shown in this work that intercultural sensitivity is not an instinctive or universal aspect of human behaviour and that it is a challenge for educational systems to accommodate people from different cultures. It was found that teachers in Melilla and Ceuta show high levels of intercultural sensitivity, which can be very helpful for teaching sensitivity to their students in a natural way. This fact shows that context and training can be two important points in the development of high levels of intercultural sensitivity.
Teachers are open to meeting people from other cultures and getting to know them too. This is considered highly positive; as such, knowledge and interaction can bring about new relations among cultures. Interaction enjoyment and interaction attentiveness happened to have the highest levels among the teachers of this research, and these dimensions can be very useful in fostering interaction among cultures. However, these dimensions themselves do not guarantee intercultural competence, and it is recommended here to work on fostering and learning this competence, working on the rest of the dimensions to create an intercultural competence with a combination of all of them.

The present study has limitations and elicits suggestions for future studies. The first limitation focuses on the number of variables analysed, although they could be considered sufficient for a preliminary study. For future research, it is advisable to explore other variables. Future research could involve more complex designs or longitudinal studies with different samples to study the change of results over time. 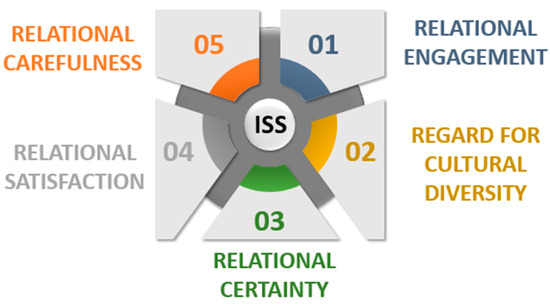