The economic, timeliness, reliability, convenience, safety, environmental protection, and other factors of different modes of transportation are the main factors that affect their competitiveness.
The generalized cost can approximate the “comprehensive cost” paid by the shipper to choose a certain mode of transportation and is closely related to the market share of various modes of transport within the transport corridor. The calculation of generalized expenses generally includes two algorithms of addition and multiplication. If the effects of each factor are independent of each other, the addition factors can be used to combine the influencing factors. If the influence of a factor can be applied to other factors, the multiplication rule can be used to solve it.
In this paper, the generalized cost function of China Railway Express and China–Europe Shipping consists of six parts: economy, timeliness, reliability, convenience, safety, and environmental protection, among which economy, timeliness, reliability, convenience, and environmental protection are independent of each other and each has a certain impact on the competitiveness of the transportation mode, while safety has a certain impact on other factors. Therefore, this paper constructs a generalized cost function using additive multiplication to solve it.

This paper constructs a discrete selection model using random utility theory and determines the transportation market share rate of China Railway Express. The basic principle of stochastic utility theory is that when decision makers face multiple choices, the option with the most utility is always chosen. In the choice of mode of transportation of goods between China and Europe, the shipper also has a perceptual utility for each mode of transportation. According to the theory of random utility maximization, if, and only if, Equation (7) is true, the m-th selector will choose the i-th option.
In Equation (7), i and k are alternatives, and n is an alternative set, where and represent the utility of the selected i and k schemes, respectively. The utility of the selection scheme is a random variable that consists of a fixed utility term and a random utility term error . The fixed term is the opposite of the generalized cost function, and the random utility error is used to describe the effect of unobservable factors on the utility of the program. Its random utility can be expressed as
It is assumed that the random terms in the utility function are independent of each other and obey the same Gumbel distribution. According to the general form of the Logit model, the sharing rate of the i-th transport mode selected is
indicates the probability that the i-th transport mode is selected, which needs to satisfy

4. The Analysis of the Case of China Railway Express

This paper analyzes the competitiveness of China Railway Express and China–Europe Shipping, mainly for the domestic cargo export business from China to Europe.

From the perspective of the whole process, China Railway Express is similar to China–Europe Shipping, and their main distinction is the transportation operation. When comparing the competitiveness of China Railway Express and China–Europe Shipping, this paper selects the Beijing-Tianjin-Hebei region as the major source area of the goods and Hamburg, Germany, as the destination. The main operations studied are from the goods loaded into the container at the shipper’s warehouse to the container arriving in Hamburg, Germany. The arrival operation in the country of destination is not researched in detail. This paper collects 5109 sets of the whole process of transportation data for export goods in a certain period of time. When the statistical calculation of different influencing factors is carried out, the goods of every 20 feet of a standard container are regarded as the selected unit and brought into the sharing rate model for parameter solving.
After organizing the sample data of 5109 sets transported from the Beijing-Tianjin-Hebei region to Hamburg, Germany, the following relevant data are calculated. In the 5109 sets of the China–Europe container transportation cases, 1642 containers were transported by China Railway Express, and another 3467 containers were transported by China–Europe Shipping.

According to the information of the schedule of China Railway Express train operation in 2018, it is known that the number of trains transported from Zhengzhou to Hamburg is seven per week. The shipping schedule of China–Europe Shipping from Tianjin Port to Hamburg Port is about one per week.

The values of the influencing factor parameters in Section 4.2 are brought into Equation (15). The maximum likelihood method is used to solve the values of the parameters , , , , and .
The calculation Equation (16) is solved by MATLAB and the five parameters obtained are is −0.7599, is −0.2315, is −0.4381, is 0.3985, and is −0.1375.
The parameters are brought into the logit model for the solution, and the influencing factors’ utility values and the sharing rate results are shown in Table 5. 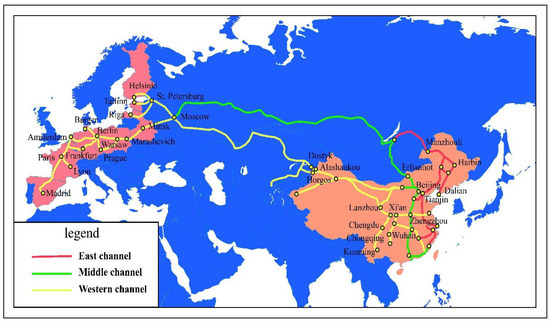 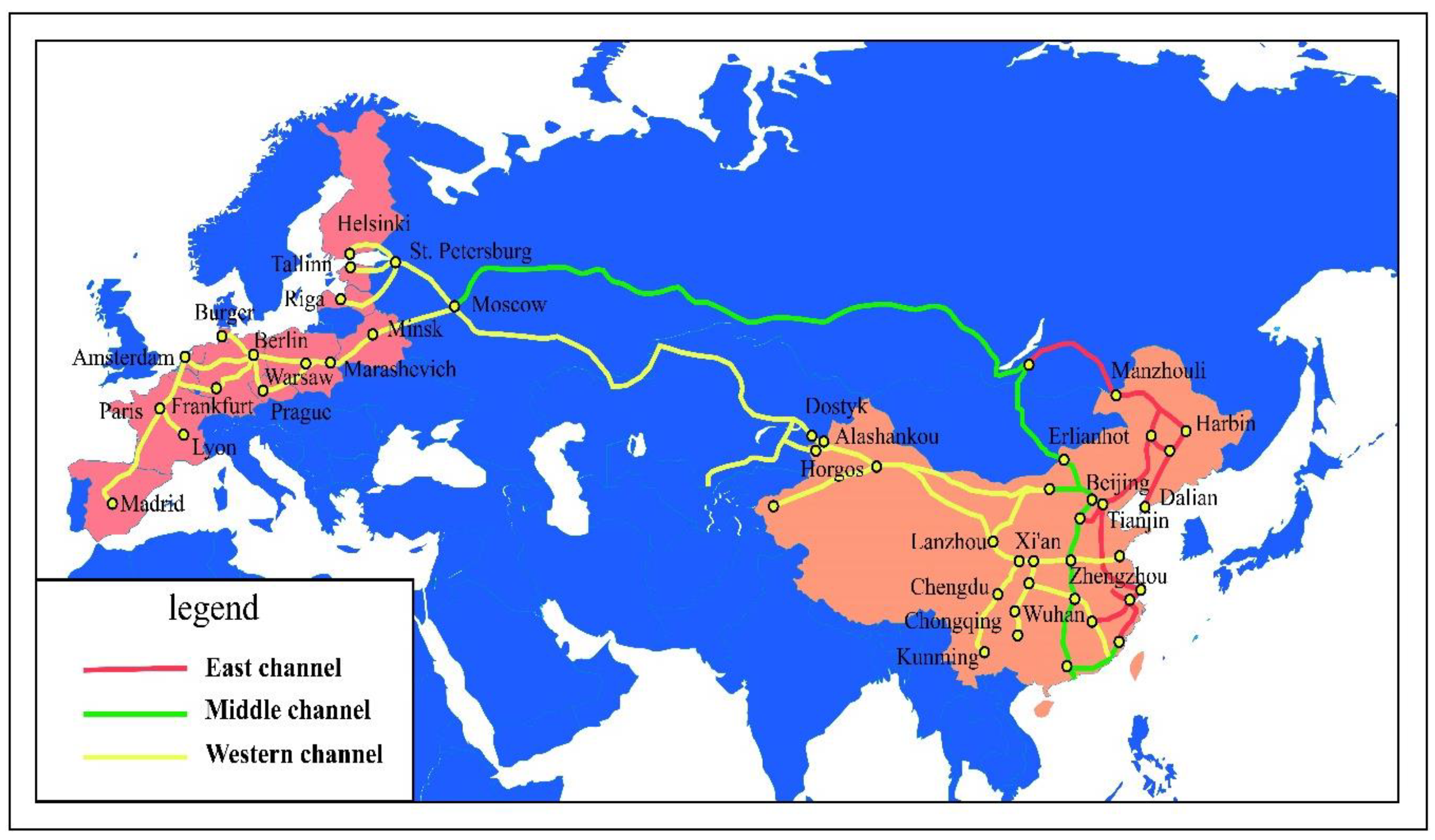 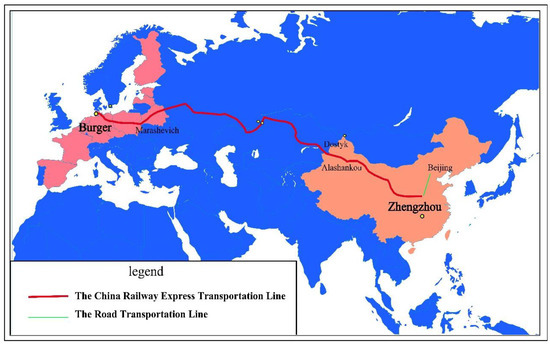 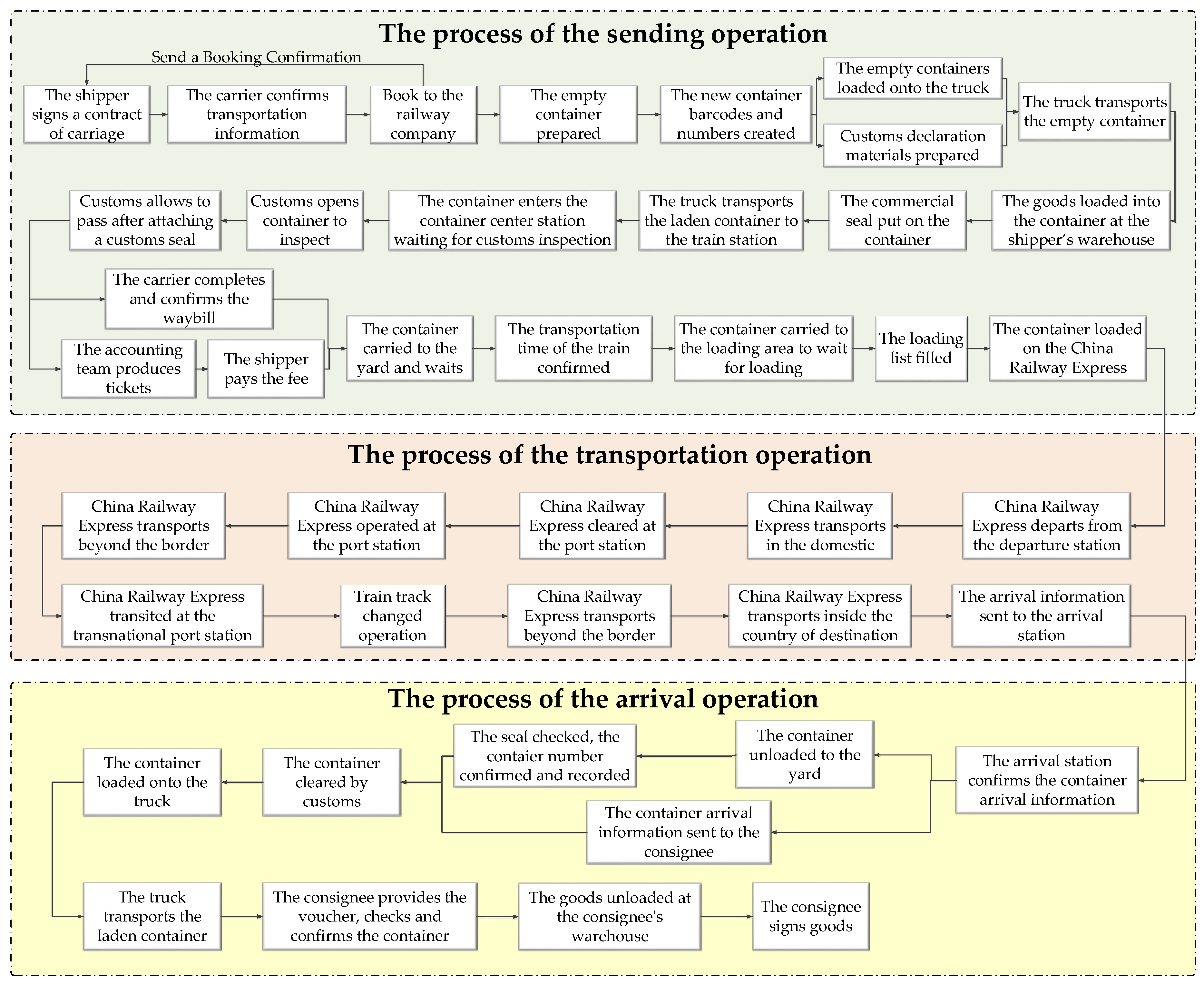 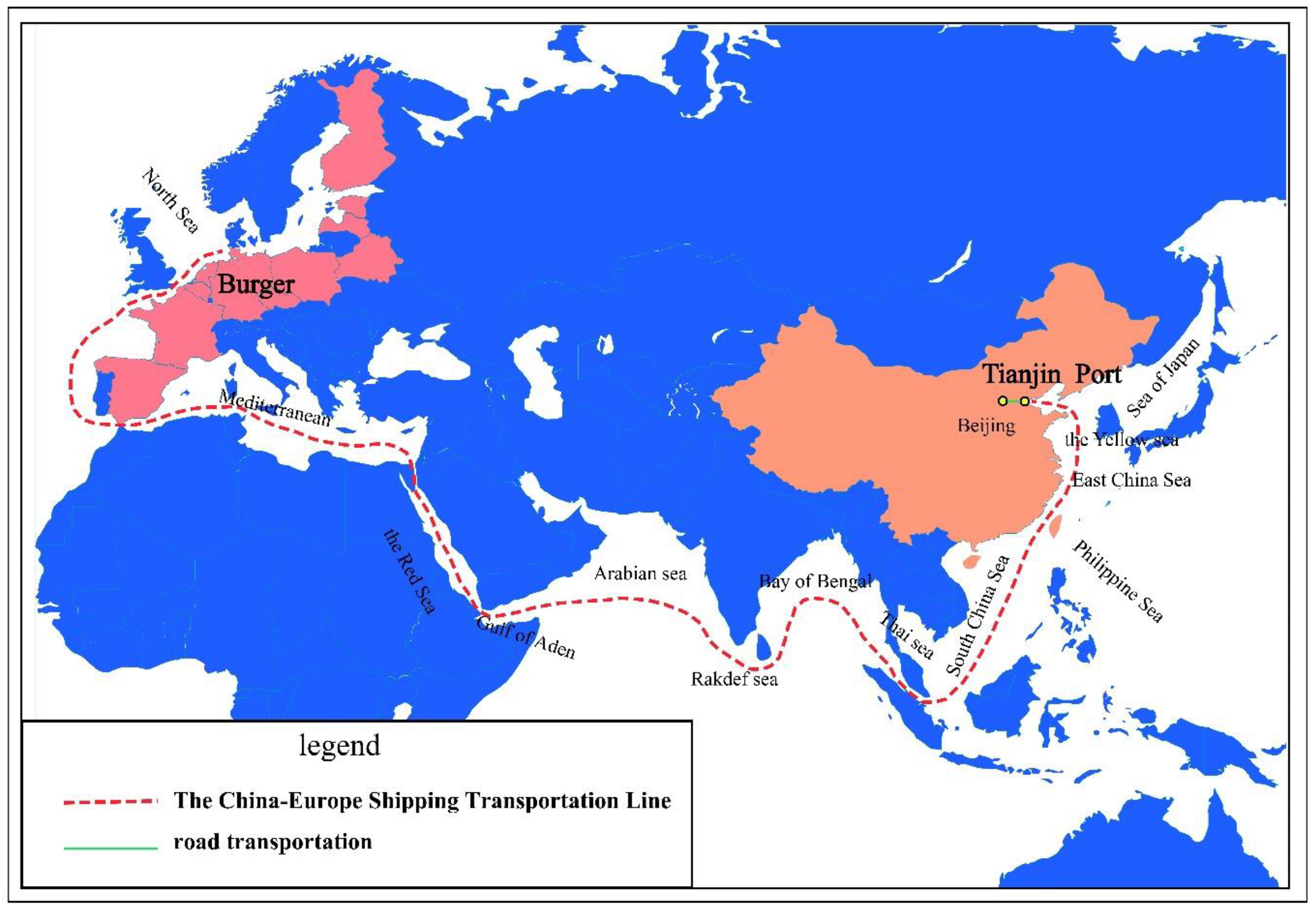 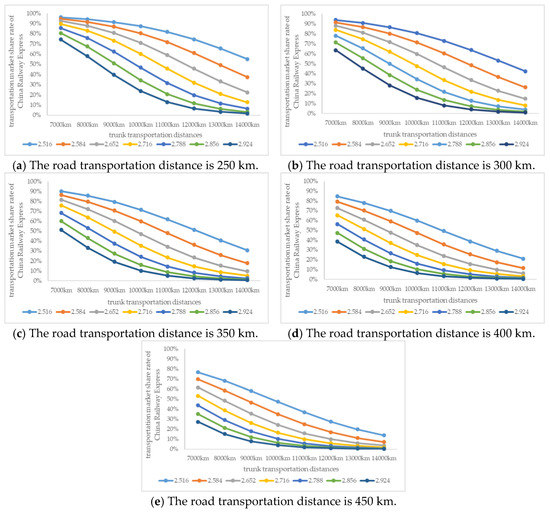 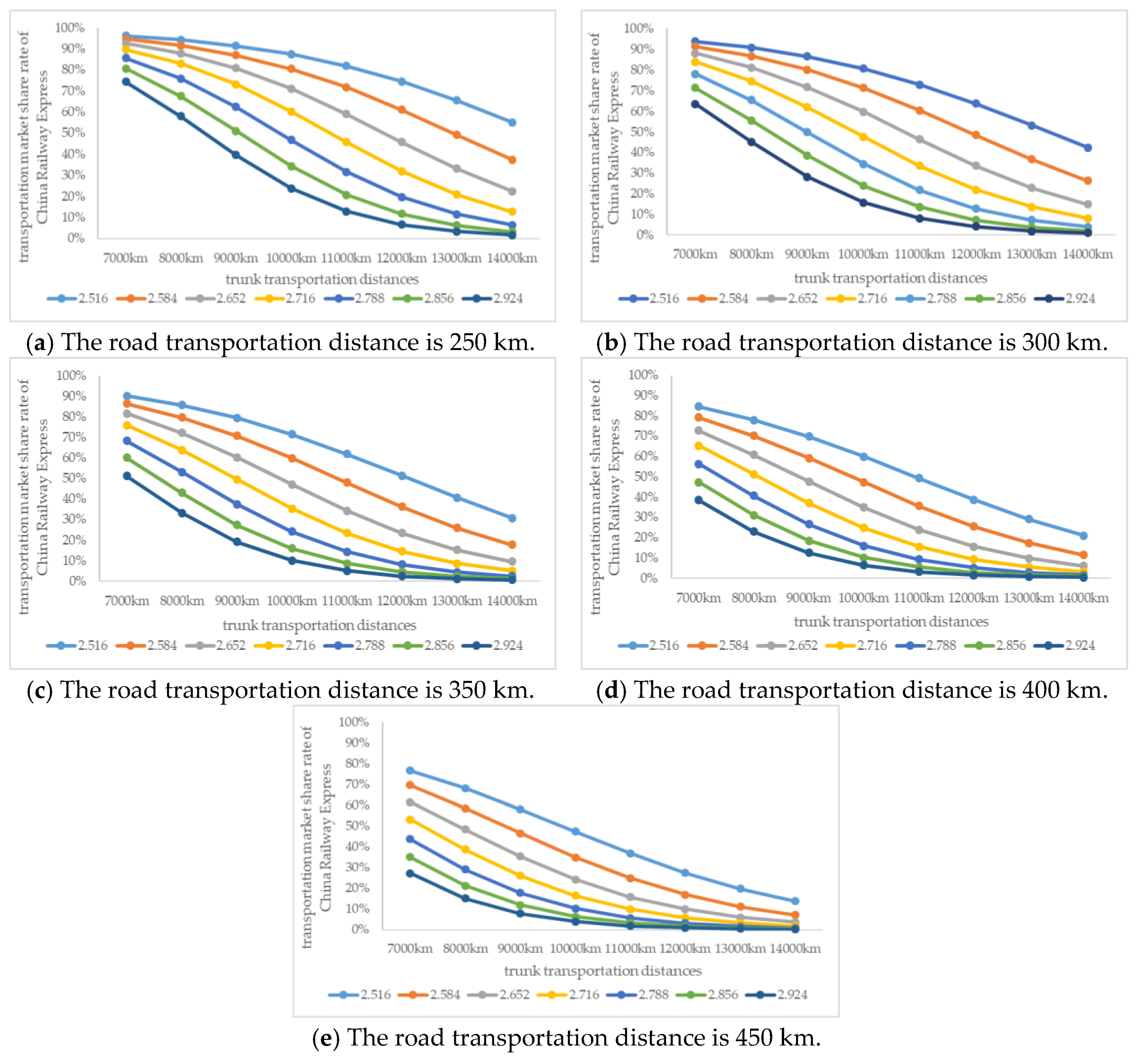 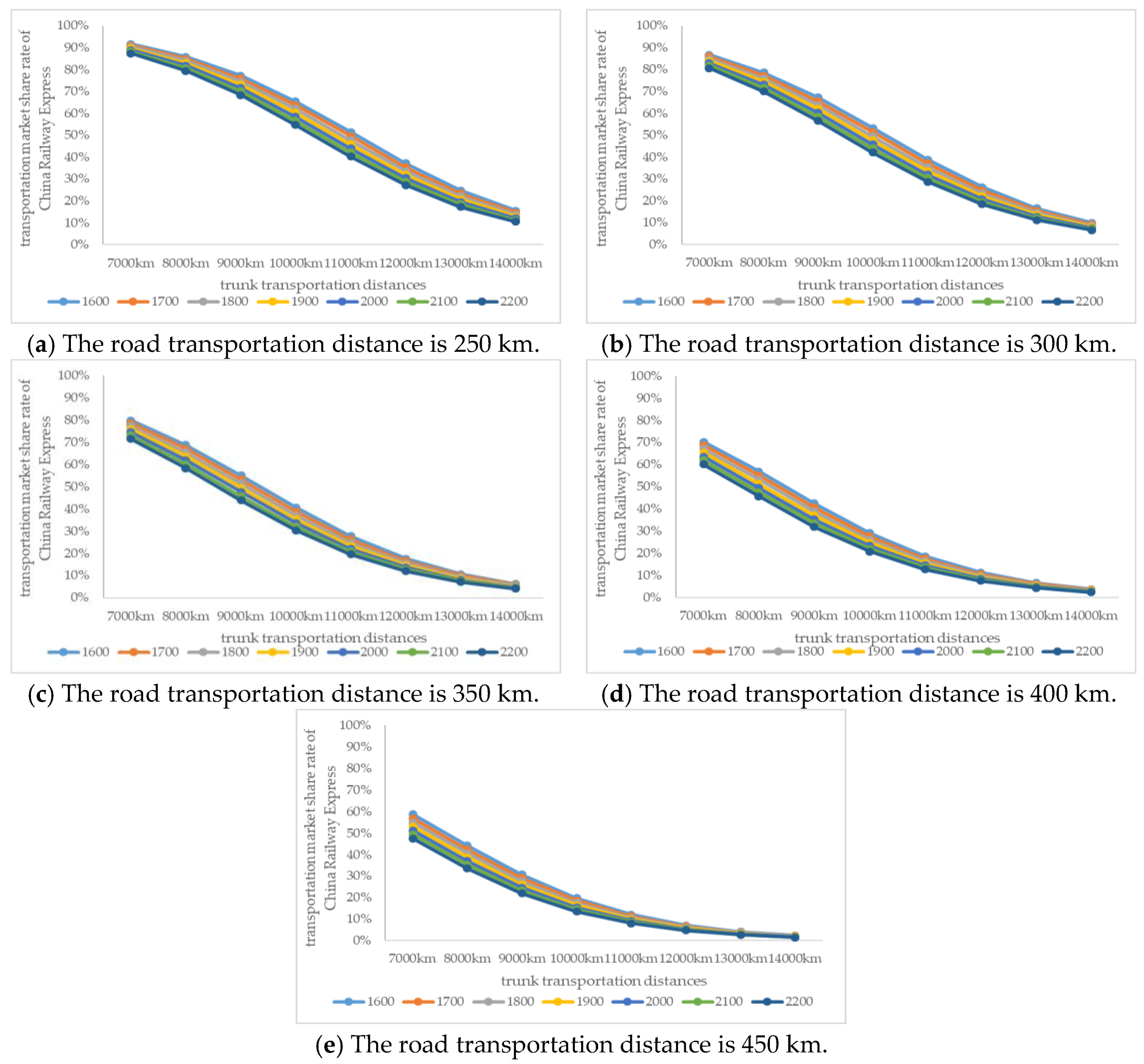 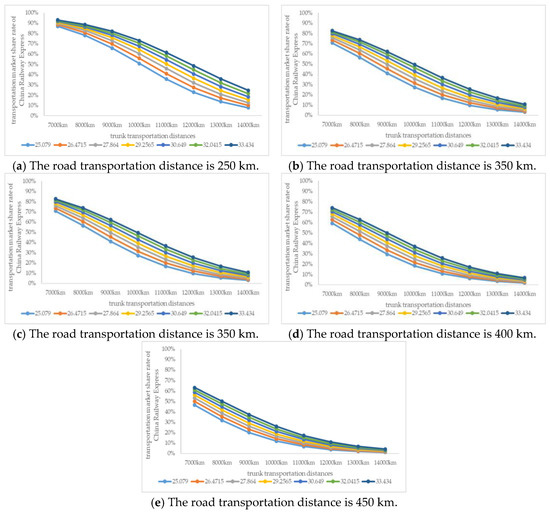 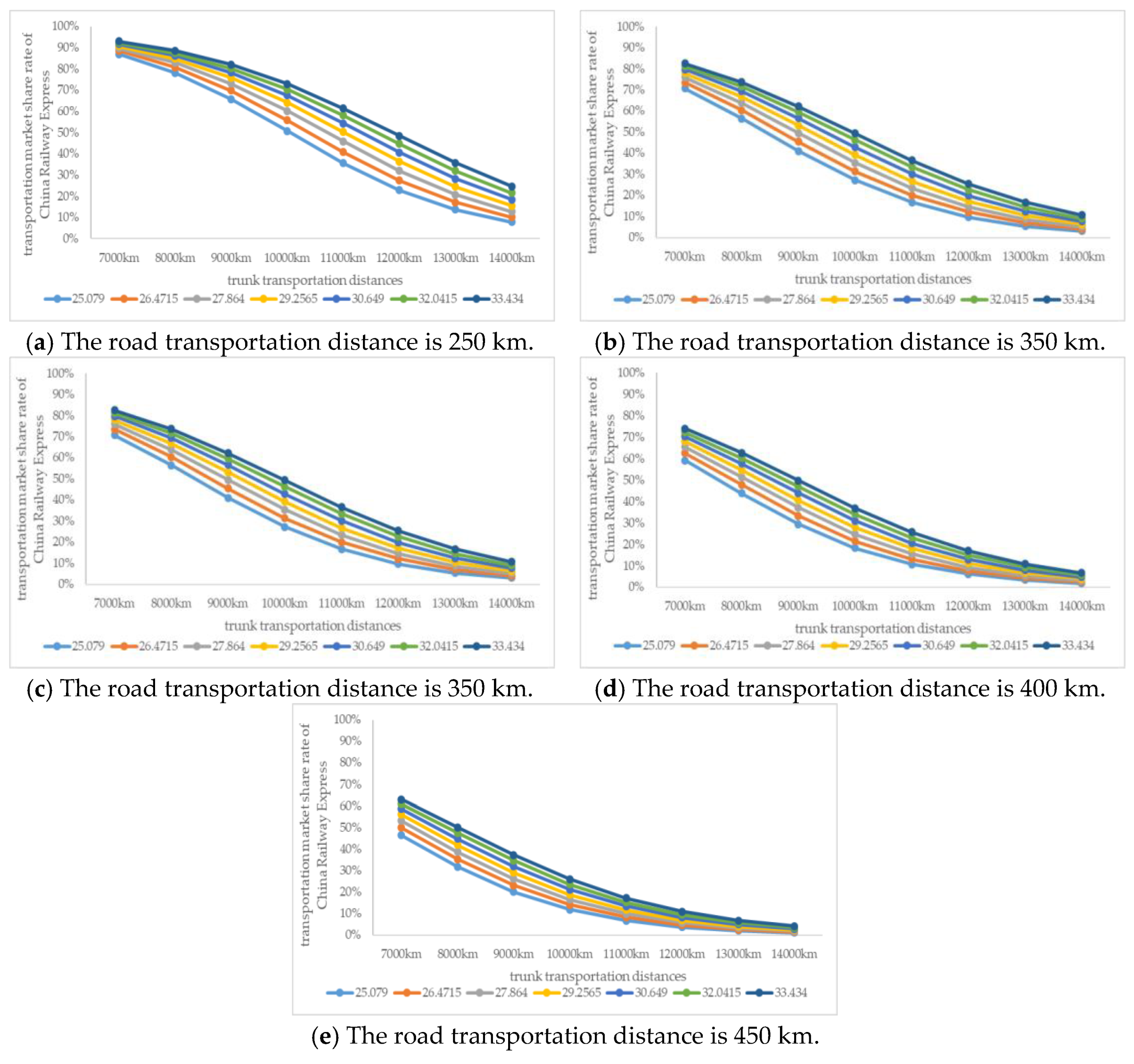 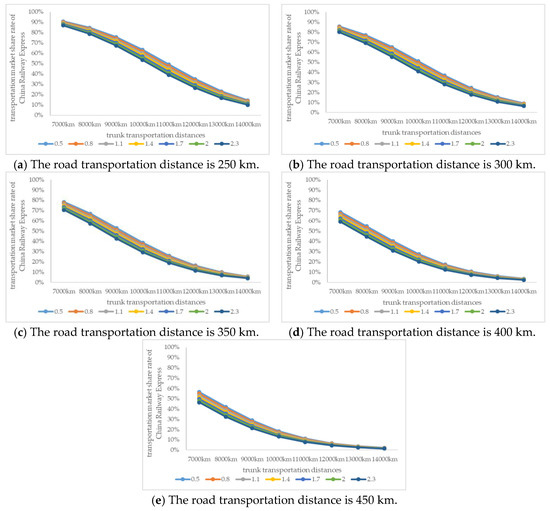 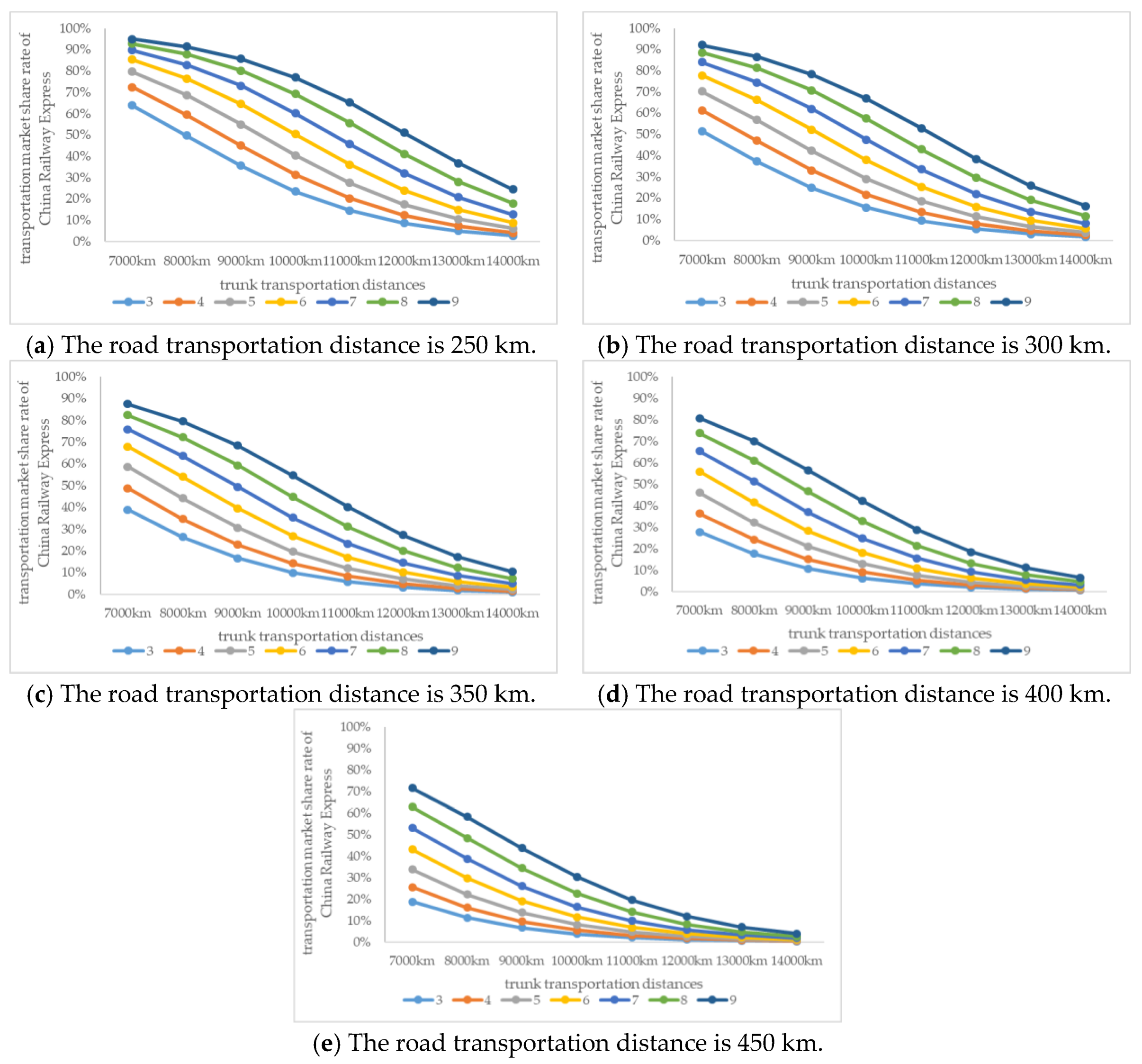 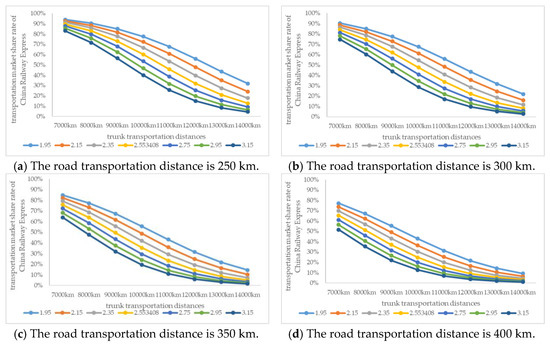 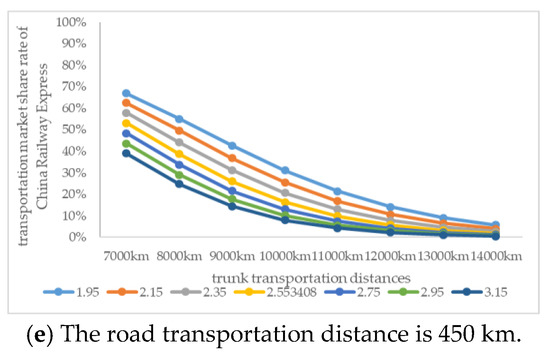 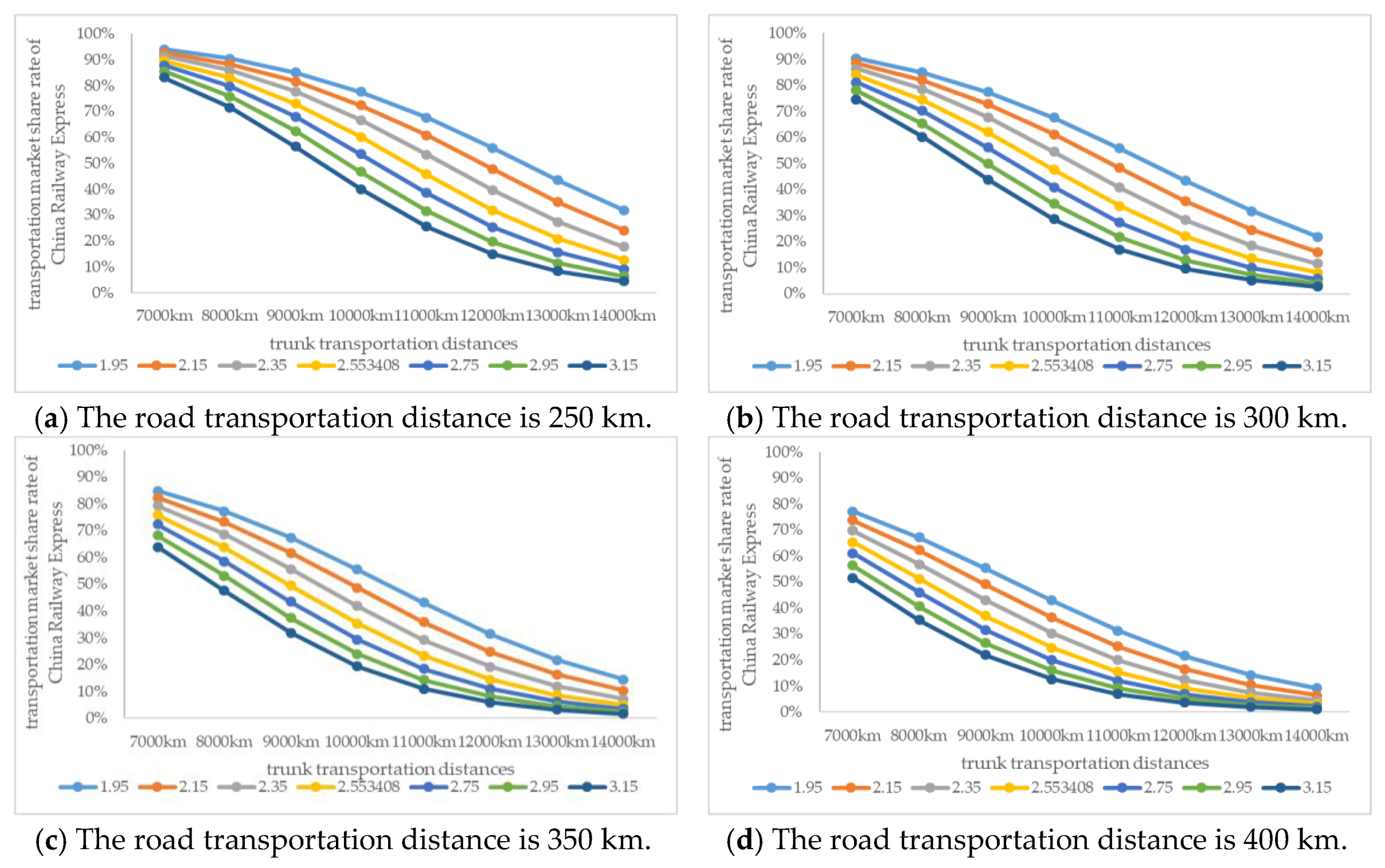 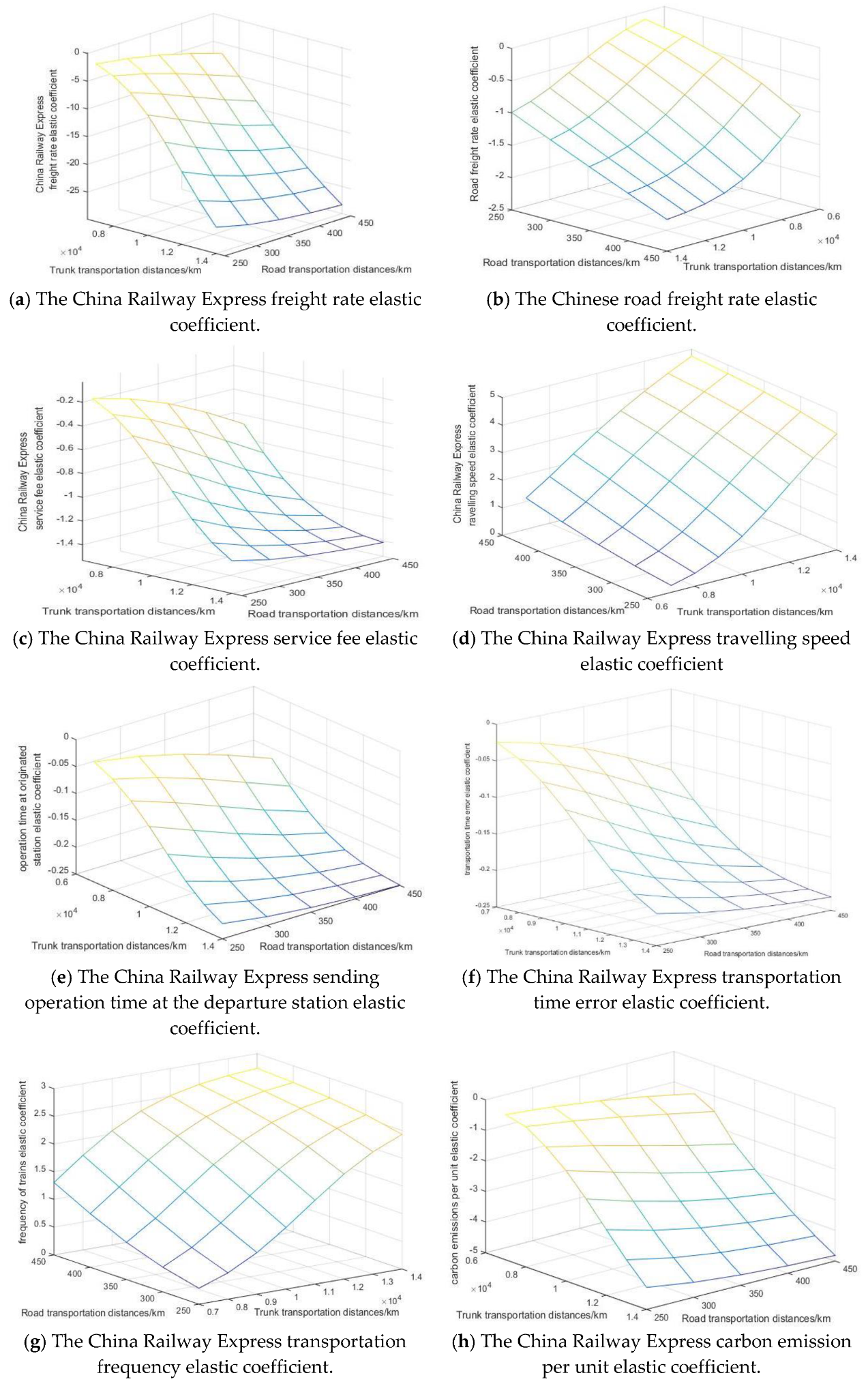