This study presents an analysis of Landsat data to quantify how the deployment of landmines and demining operations in the first national park in Iraq, the Halgurd-Sakran Core Zone (HSCZ) in the Kurdistan region, has altered the vegetation/land cover patterns over 17 years (between 1998 and 2015). Post-war impacts of landmines on land cover fragmentation and degradation in HSCZ are examined using GIS and remote sensing. Landmines fundamentally change the available land use options for local communities by limiting access to the land. Their widespread use in military conflicts around the world made investigating the impacts of minefields on land cover fragmentation the subject of scientific studies. The Iraqi-Iranian war (1980–1988) and subsequent conflicts have left behind densely mined areas in Kurdistan, especially in the border zones, which were previous battle zones. These leftover weapons of historic wars are indiscriminate and still affecting people. The results revealed that the relationship between land use/land cover (LULC) classes before and after the Fall of Baghdad is different for all classes, especially for pasture and cultivated lands. Between 1998 and 2015 the proportion of land covered by forest or under agricultural cultivation decreased substantially, matched by a large increase in pasture extent. The results also show that after 2003 increased attention has been paid to raising landmine awareness in the areas most affected by mines. Additionally, the landmines slowed down the progression in HSCZ, otherwise, agricultural production and productivity could potentially have doubled. The change in cultivated land area in the park does not relate to population growth but to the presence of minefields, minefield programme awareness, and socio-economic factors. Strong rural pull factors succeeded in bringing displaced people back to villages as a result of social progress, economic growth, and political stability in HSCZ. View Full-Text
Keywords: land cover changes; landmines; socio-economic factors; rural-urban migration; mine awareness education land cover changes; landmines; socio-economic factors; rural-urban migration; mine awareness education
►▼ Show Figures 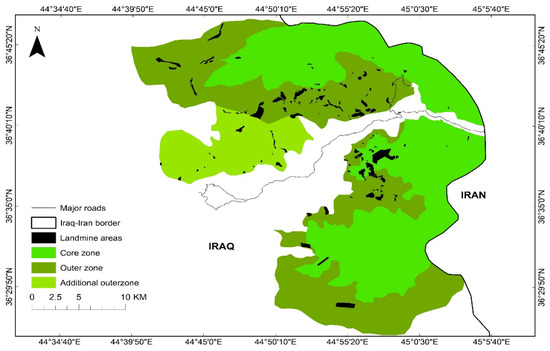