Study on Air Pollution and Control Investment from the Perspective of the Environmental Theory Model: A Case Study in China, 2005–2014

Located on the west coast of the Pacific Ocean in Eastern Asia, China has a land area of about 9.6 million square kilometers. The terrain of China has great diversity. In general, the altitude is high in the west and decreases to the east coast. Basins account for nearly 20% of China’s land surface. In addition, the low attitude in these regions could cause atmospheric pollutants that are difficult to diffuse [33]. High wind speeds have a strong dilution effect on atmospheric pollution. Nevertheless, in recent years, under the influence of global warming, the wind speed in China has weakened [34], and this has exacerbated the air pollution [35,36]. In addition, because of its monsoon climate, China’s precipitation is mainly concentrated in warmer months. In colder months, the lack of precipitation prevents the atmosphere from purifying, making the air pollution problem more serious. The economic structure of China was still dominated by the secondary industry from 2005 to 2014, and the proportion of the secondary industry was 42.72% in 2014, which remains a major source of the deterioration of China’s air quality. Therefore, the study of the status of industrial air pollution investment is the main concern of this paper. The specific study area is shown in Figure 1.

• Environmental Theory Model [37]
The meaning of the environmental theory model is that environmental quality is affected by the per capita income, industrial structure and the adoption of environmental technologies. Each variable uses logarithms to characterize the nonlinear relationships with other variables and reduce the influence of heteroscedasticity. According to the environmental theory model, this article selects each index and air quality for the correlation analysis to obtain a strong index related to air quality for subsequent research.
• API Calculation
This article selected the API for the synthesis of air pollutant data to obtain comprehensive air quality data for data analysis. The Air Pollution Index (API) was used to evaluate the quality of the air in China from 2001–2012. The index synthesizes SO2, NO2 and PM10 information into a comprehensive value. After 2013, due to the heavy air pollution events, the Air Quality Index (AQCI) was adopted to replace the API in China. This index synthesizes information about SO2, NO2, PM10, PM2.5, CO and O3 [38]. In order to maintain the continuity of the data, this paper selected SO2, NO2 and PM10 from the air pollutant data in 2013 and 2014 for the API calculation and obtained API data for 2005–2014.
• Comparison of Inverse Distance Weighted Interpolation (IDW) and Kriging Interpolation Methods
IDW is a deterministic interpolation method which is estimated based on the weighted average [39]. The Kriging interpolation is also called the spatial local interpolation method. It can implement a linear optimal unbiased estimation of the data at unknown sampling points in a region [40]. IDW is more suitable for the proliferation of point source data, while Kriging is more suitable for continuous data diffusion. The monitoring point API data used in this paper are point source data and the air is fluid, so IDW was used for this study [41].
• Research Framework
The main flow of this paper was as follows: First, this paper selected the indicators under the environmental theory model for analysis and used the API calculation method to combine the air pollutant concentration data into API data, spatially interpolate the API data and use the interpolated data to carry out air pollution APIs in each province. The data were restatistically obtained by the provincial average API data, and finally, using the Pearson correlation analysis and the scatter plot curve fitting to analyze the relationship between air quality and the pollution treatment investment, the specific process was as shown Figure 2.

Table 1 shows the contents of the database used for this paper.
This paper included 310 data sets of five group from China’s Statistical Yearbook, comprising GDP per capita, concentration of various air pollutants, proportion of the tertiary industry, control of waste gas investment, and total capital formation of the provinces, which made it possible to reduce the impacts of spatial and temporal differences. The specific air quality monitoring sites are shown in Figure 1.

The Air Pollution Index (API) was used to evaluate the quality of air in China from 2001–2012. The index synthesizes SO2, NO2 and PM10 information into a comprehensive value, thus making it convenient for understanding [42]. The “China Statistical Yearbook” (2005–2012) only provides air contaminant concentration data of sulfur dioxide (SO2), nitrogen dioxide (NO2) and particulate matter (<10 μm) (PM10), and carbon monoxide (CO), ozone (O3) and particulate matter (<2.5 μm) (PM2.5) were added to air quality indicators after 2013. Out of consideration of data consistency, this paper used data on SO2, NO2 and PM10 from the years 2013 and 2014. The API calculation method used to process the data on SO2, NO2 and PM10 from 2005 to 2014 is shown in Equation (2) [42]: where is the index for pollutant i (i.e., PM10, SO2 and NO2); is the average concentration of pollutant i; and are the upper and lower breakpoints (the critical value of different pollutant levels) corresponding to , respectively; and and are the breakpoints of API corresponding to and , respectively. The overall API is the maximum (Table 2).

Considering that the point data from the monitor sites is incompatible with the realistic surface, and because air has a strong diffusion effect, inverse distance weighting (IDW [43]) was used to spread point-like data across the country. In this way, data on the surface air pollution of each province was obtained. By using IDW, it was possible to see air quality change from 2005 to 2014 more intuitively. The IDW formula was used to estimate the unknown factor of the monitoring station value, in location , as shown in Equation (4) [44]:
is the weight, defined as with where is the number of monitoring stations; is the distance between the monitoring station and the unknown location; and is an arbitrary positive real number.

The Pearson correlation analysis was used to analyze the API index versus the GDP per capita and the proportion of the tertiary industry in a given area to control the exhaust gas investment and to determine total capital formation. More relevant factors that influence air pollution were obtained from a follow-up analysis. The Pearson correlation coefficient () for the five factors of each province-level city in China was calculated to assess their relationship [45]. was calculated with the p-value from the t-test, as shown in Equation (7): where ranges from 1 to 310 and represents the data group; is the total number of data groups; is the statistics factor of group ; is the mean statistical factor of the groups. is regarded to be significantly different and credible when the p-value is below 0.05.

3.1. Temporal and Spatial Changes in Air Quality in China

For a comparison of the air quality, we mapped the average air quality for the two five-year periods from 2005 to 2009 and 2010 to 2014 using raster calculator tools in ArcGIS (Figure 3).
The figure shows that the air pollution from 2005 to 2009 was aggravated, especially in Inner Mongolia (north of the map) and the north China region. The concentrated areas of air pollution from 2005 to 2009 included Northern Xinjiang (north-west of the map), Gansu (centre of the map), and Beijing (north-east of the map). In addition, from 2010 to 2014, atmospheric nitrogen (N) emissions increased by 38% due to industrial structure and transportation pressure [46], the air pollution situation in these three regions was aggravated, and due to the impact of dust storms and highly polluting industries [47] a new pollution concentration area emerged—Shaanxi (centre of the map). In addition, the pollution in Beijing shifted to the Southern part of Hebei (north-east of the map) where the pollution significantly increased. The air quality in Inner Mongolia was seriously affected by the north China region, and the air quality in south China also declined to some extent.
In order to assess the changes in air quality in more detail, the IDW was used to map China’s API interpolation from 2005 to 2014, as shown in the map in Figure A1.
During the period from 2005 to 2012, China’s general air quality stayed moderate. The pollution was mainly concentrated in Northern Xinjiang and Gansu, and the air quality in the monsoon region was relatively good. As the winter monsoon weakened in 2013, the weak wind speed, the longer duration of inversion across the country [5] and the long-term accumulation of pollution emissions, caused the air quality in the north China region to deteriorate, affecting air quality in most areas in Northern China. Furthermore, Southern provinces were also influenced, and the country’s overall air quality declined. Despite the air quality improvement in 2014, the situation of air pollution is far from optimistic.
In order to test the accuracy of the 34 sets of data, based on the monthly air quality report (Ministry of Ecology and Environment of the People’s Republic of China), this paper used 74 monitoring sites to perform IDW interpolating operations on the data from years 2013 and 2014 and acquired the composite air quality index (Figure 4) and determined the Pearson correlation coefficients of the correlation analysis between the API and AQCI data in ArcGIS (Table 3).
Through a comparison, it was found that the interpolation graph used in this study had a high degree of reliability, with the coefficient of correlation being between 0.942 and 0.917.

4.1. Variable Selection and Applicability of the Environmental Kuznets Curve

Due to limited resources and data availability, we acknowledge the following limitations. Firstly, in terms of data precision, after 2013, two new indexes were added to China’s air quality monitoring indicators, PM2.5 and ozone (O3), which were not included in this study to allow data continuity. In addition, we only used 34 monitoring sets points, so the interpolation data accuracy still needs to be further improved. For the accuracy problem, this study used 34 sets of API interpolation maps and 74 site interpolation maps from 2013 and 2014 for the correlation analysis and obtained a high level of correlation. It is concluded that the data accuracy of this paper is good.
Secondly, the effect of interference factors presented a limitation. This paper mainly focused on the air pollution control status study in the secondary industry. Apart from industrial air pollution, less ink was given to other sources of air pollution. Still, this paper did not exclude the interference of other pollution sources with air quality. Future research will study how to analyze the status of multi-source air pollution control and investigate how to reduce the interference of irrelevant variables in the analysis.

This study was supported by the Natural Science Foundation of Zhejiang Province, China (LQ18D010003). The valuable comments and suggestions from the editor and three anonymous reviewers are also greatly appreciated. 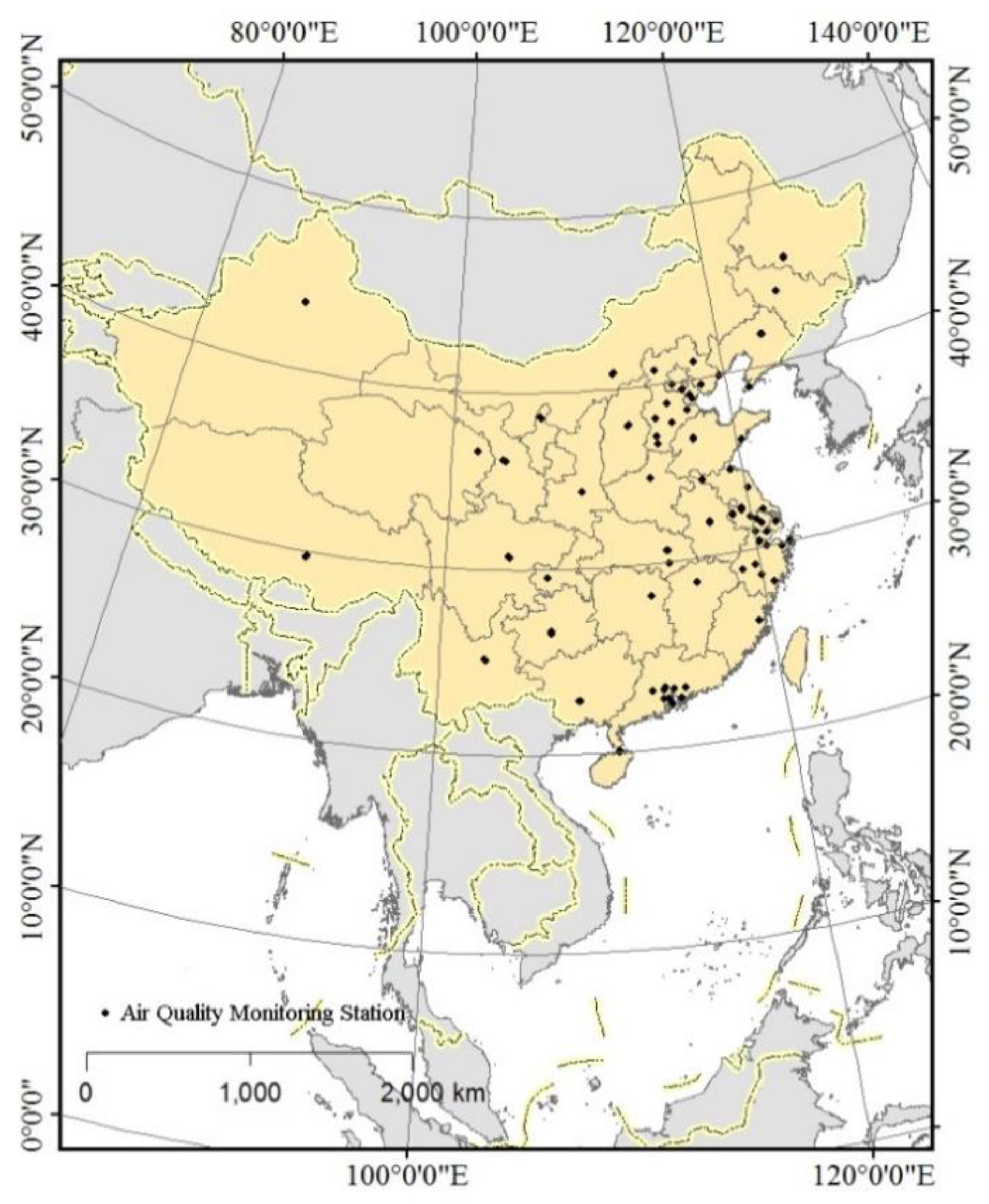 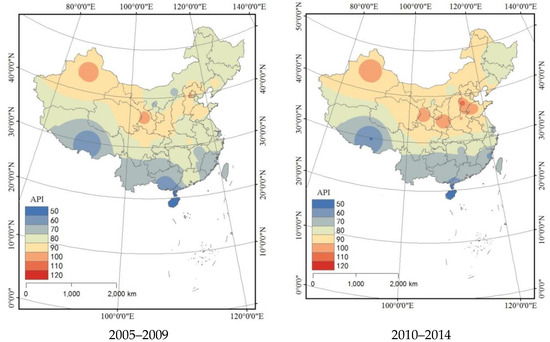 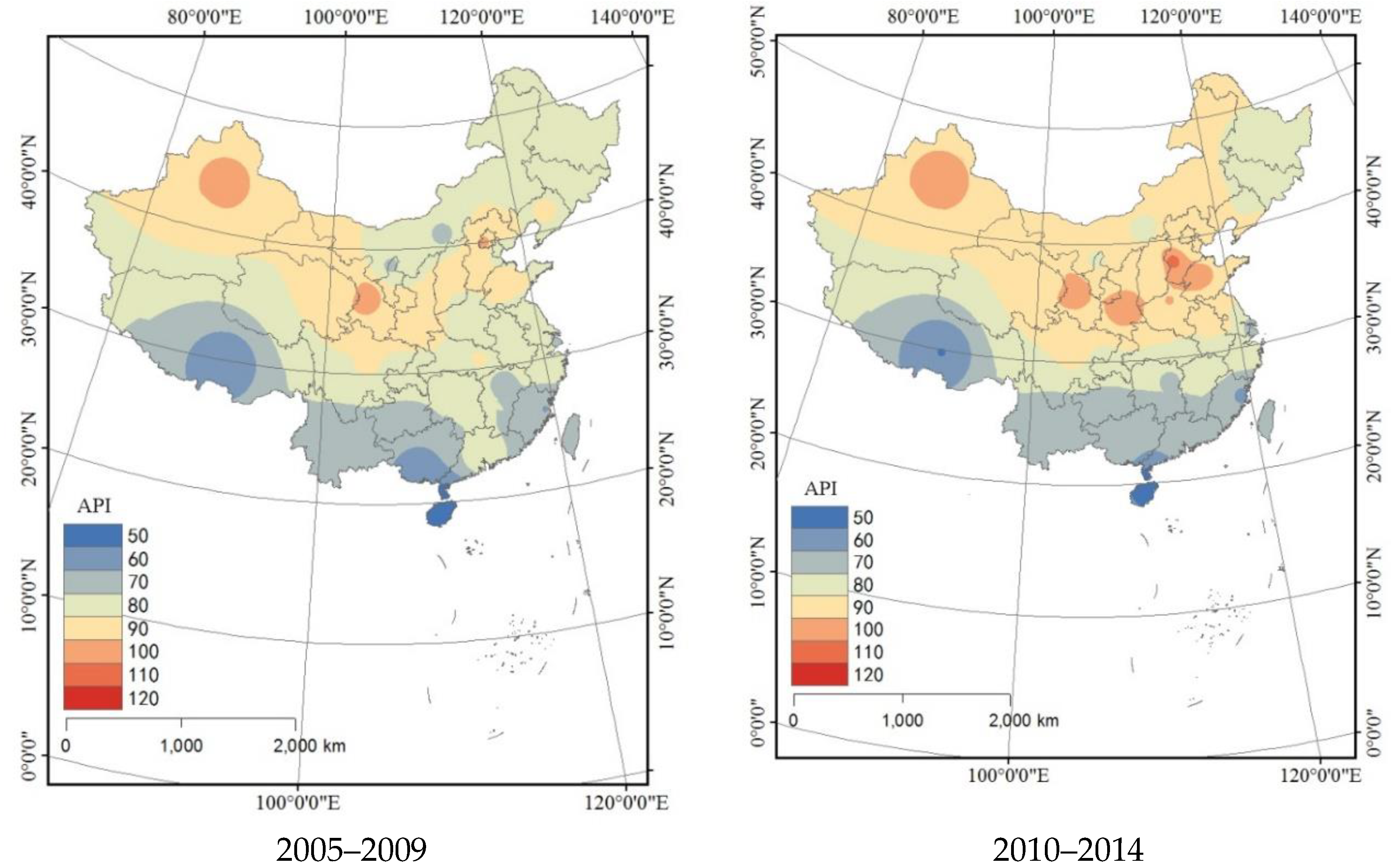 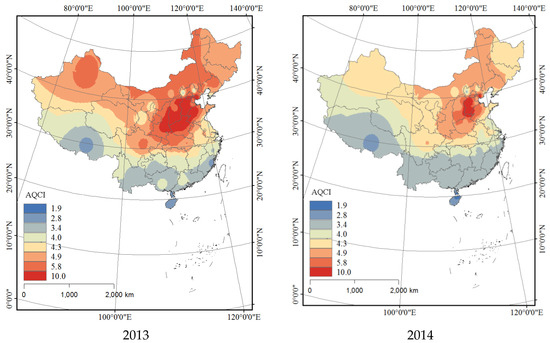 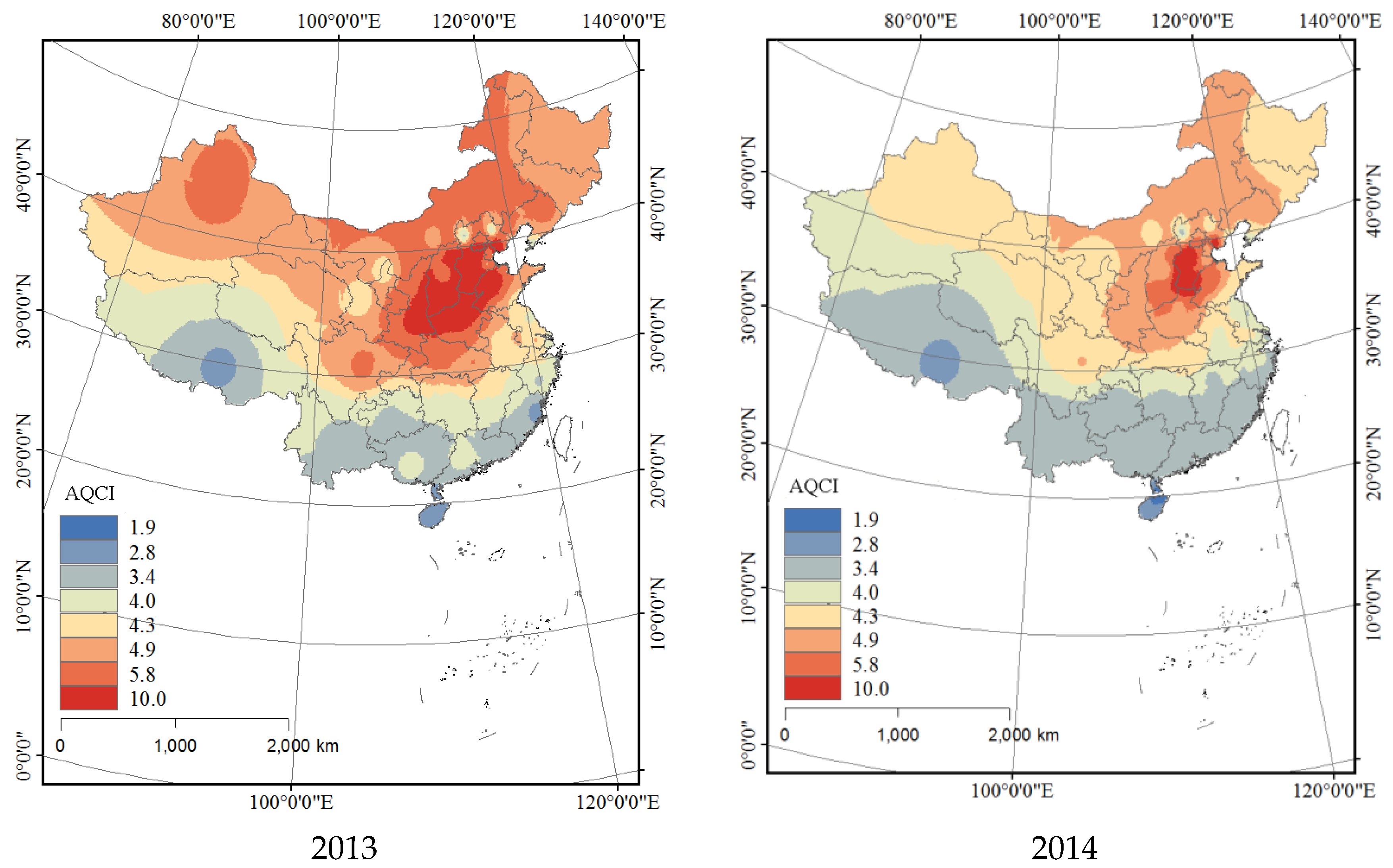