Work Integration of the Roma: Between Family and Labor Market
Next Article in Special Issue

Effect of Cadmium, Copper and Lead on the Growth of Rice in the Coal Mining Region of Quang Ninh, Cam-Pha (Vietnam)
Previous Article in Journal

Change of the Extractability of Cadmium Added to Different Soils: Aging Effect and Modeling

Despite a declining trend, California remains a significant oil-producing state. For every barrel of crude oil, an average of 15 barrels of oilfield produced water (OPW) is generated, some of which is used to boost freshwater sources for crop irrigation in the agriculturally important Central Valley. OPW is known to contain salts, metals, hydrocarbons, alkylphenols, naturally radioactive materials, biocides, and other compounds from drilling and production processes. Less is known about the potential uptake and accumulation of these compounds in crops and soil irrigated with OPW. In this study, 23 potted mandarin orange plants were irrigated two to three times weekly (depending on season) with water containing three different concentrations of the known OPW heavy metals barium, chromium, lead, and silver. Seven sets of samples of soil and leaves and 11 fruits were collected and processed using microwave-assisted digestion (EPA Method 3051A). Processed samples were analyzed using inductively coupled plasma-optical emission spectroscopy (ICP-OES). Analysis of variance (ANOVA) and covariance (ANCOVA) coupled with Tukey’s honest significant difference test were used to examine the effects of metal concentrations in the irrigation water and number of watering days, respectively, on the metal concentrations in the soil, leaf, and fruit samples. Accumulation of barium in soil and leaves was strongly positively associated with sample and number of watering days, increasing nearly 2000-fold. Lead also showed an upward trend, increasing up to 560-fold over the baseline level. Total chromium showed an increase in the soil that tapered off, but less consistent results in the leaves and fruit. The silver results were more volatile, but also indicated at least some level of accumulation in the tested media. The smallest absolute accumulation was observed for chromium. Concentrations in the fruit were highest in the peel, followed by pith and juice. Accumulation of all heavy metals was generally highest in the soil and plants that received the highest irrigation water concentration. Considering the potential for adverse human health effects associated with ingesting soluble barium contained in food and drinking water, and to a lesser extent chromium and lead, the study signals that it is important to conduct further research into the accessibility and bioavailability of the tested heavy metals in the soil and whether they pose risks to consumers. View Full-Text
Keywords: oilfield produced water; wastewater; heavy metals; irrigation; bioaccumulation; soil health; California oilfield produced water; wastewater; heavy metals; irrigation; bioaccumulation; soil health; California
►▼ Show Figures 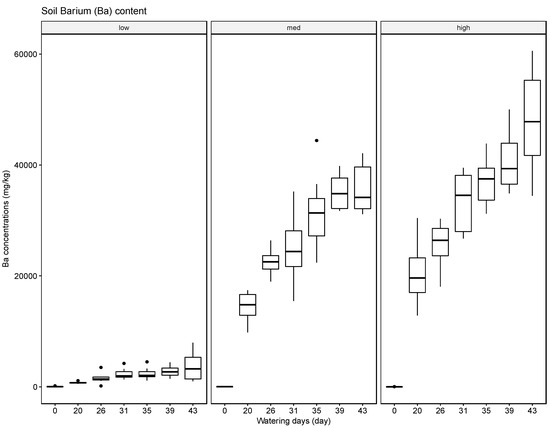